AAR5: Under Estimating the Enemy

After a couple weeks of failed diplomacy, Uwanda broke off talks regarding the captured territory. Meanwhile, Mugabia had mobilized proper troops and deployed them to the villages and towns in the newly acquired territory.

Uwandan Overflights collected intelligence without much interference from Mugabia, and a non-negotiated ceasefire ruled the day. Mugabia hesitated, not knowing how far they could push the conflict, and Uwanda made its move. 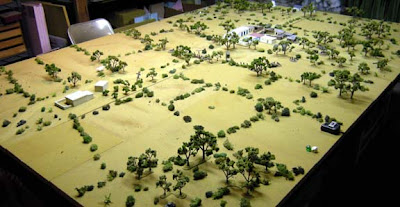 Above - View of the village at objective A59 from the west.

Mugabian forces consisted of mostly infantry with little heavy equipment.   They were (and are) also not particularly well trained or lead.  So it was believed that a relatively small Uwandan  force with some heavy armor could push the lightly armed infantry out.  Once the Mugabian infantry broke, the Uwandan  armored force could sweep the villages and push Mugabian troops out completely. 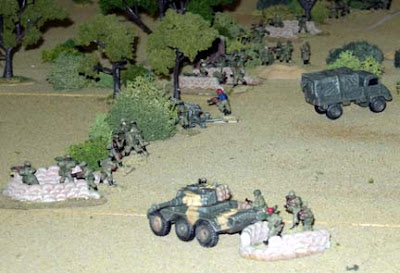 Above -  Mugabian infantry deployed around the perimeter of the village.
On the chosen day, Uwandan recce forces advanced and  got into position to scout the perimeter of the Mugabian troops defending A59. Firefly tanks were brought up through the wooded area southwest of the town, and succeeded in surprising the Mugabian infantry, which suffered heavy casualties very quickly. Despite the casualties and much to their own surprise, Mugabian officers managed to maintain control of the situation, quickly employing their reserve, and counter attacking the armor. 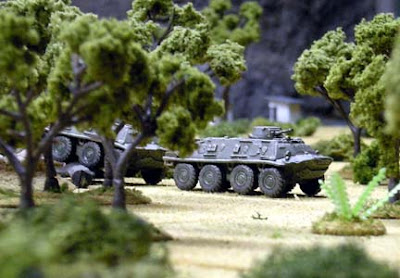 Above - The Mugabian reserve moves out.
Besieged by RPG7s and a previously captured  Saladin armored car, two of the Fireflies were silenced. Uwandan infantry, coming in via the west road, were forced to deploy and quickly got bogged down in a largely ineffective infantry battle. 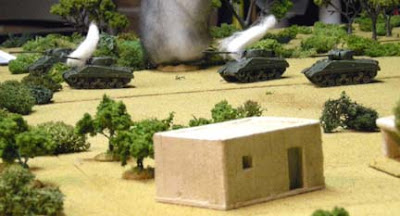 Above - Uwandan armor having a rough time.


Mugabian forces withdrew to tighten up their lines, but never broke despite heavy casualties. Uwandan forces with most of their vehicles destroyed or crippled finally accepted defeat and made a hasty withdraw.

Above - Mugabian infantry holding the line.

The cost was high for both sides, in men for Mugabia, and equipment for Uwanda. Mugabian forces lost 41 troops killed or wounded, while Uwanda lost 14 KIA/MIA and 3 WIA and their entire armor force.


Both armies paused as the the growing conflict gained some international attention. Both nations appealed to the new audience for validation and support. Uwanda appealed for international intervention to restore the border, but help was slow and came in the fashion of official protests and discussion of sanctions.


Unrest grew, and faith in President Ajizi of Uwanda fell.  There simply was not time or resources for his administration to do anything further before the elections.  The government of Uwanda would change, and Mugabia and the ULF simply waited to see the new face of Uwanda.
Posted by irishserb at 3:33 PM