My latest order from Armaments in Miniature arrived a couple of days ago, and I received my 15mm, 1/100 scale 0-2 Skymasters, A-37 Dragonflies, and OV-10 Broncos.  Quite simply, they are perfect.  Absolutely beautiful resin castings with detailed panel lines, and each coming with various options for weapons and/or tanks.

Here are a few quick photos: 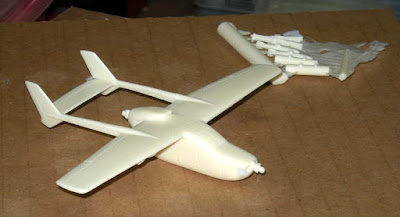 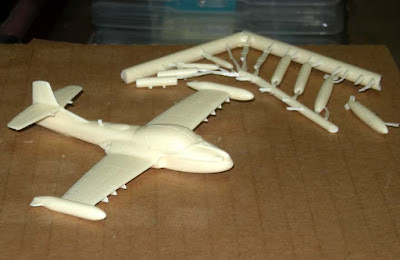 The Cessna A-37 Dragonfly 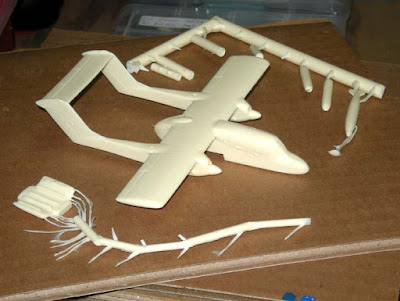 My photos don't do them justice, as my table was cluttered to permit setting up better pics at the moment, and I just wanted to get some photos out there.

These are three beautiful models of a particularly unique group pf aircraft.  All either having curious histories and or features, and all designed for, or specified for service in Vietnam.

The O-2 also served in Europe, helping to keep watch over the Warsaw Pact, and remained in US reserve and ANG units until the late 1980s.  It has served the militaries of many other nations as well, and is ideal for third world air-forces and that of imagi-nations as well.

The A-37 served well in Vietnam and remained in US service with ANG units into the 1990s as FAC aircraft.  It also saw service in Panama, during operation Just Cause, and served with a number of South American air forces.  Aircraft captured during the fall of South Vietnam served the Socialist Republic of Vietnam's AF into the late 1970s, and a few examples were transferred to various nations of the Warsaw Pact.

The OV-10 Bronco is famous for its role in Vietnam, where it demonstrated its amazing flexibility, in addition to observation/FAC/ and light attack, convoy and helicopter escort, light transport, and could function in a variety of other rolls as well.  It had an internal cargo bay in the rear capable of mounting a trainable 20mm rotary cannon, 5 paratrooper, 6 soldiers, or two casualty litters and a medic.  On top of that, it just looks cool.

After Vietnam, the aircraft served in Europe with US forces in NATO, and  a small number of  OV-10s were outfitted with new electronics serving with the US Navy and Air Force in Iraq and Syria as recently as 2015.  Consideration was even given to opening a new line to build new aircraft.

Anyway, if you play Vietnam in 15mm, you need some of these models.  These aren't on his website yet, so you'll need to e-mail Dave to order them, but they are available at $15.00 each from Armaments in Miniature, fantastic models, fantastic service, and all at a great price.  Highly recommended.
Posted by irishserb at 6:59 AM 2 comments:

The Ramblings of August

I haven't posted much lately as I haven't been accomplishing much, despite my best effort.  My 6mm Cold War infantry have been painted for for a couple weeks, and most of my time since has gone to labeling and flocking 1200 or so stands of the little fellas

Troops representing six nations over a span of 40 years.
Yes, I need to add more. 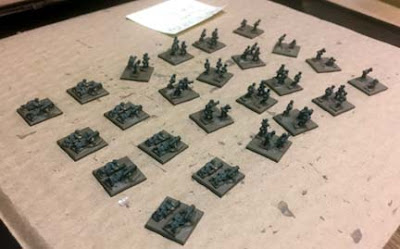 Heroics & Ros new French Infantry for the war in 1982

To be honest, I haven't been able to get in a good rhythm with this, it is just so repetitive and doesn't feed my creative hunger.  But, they are all labeled and about 45 percent of the flocking is done.  I expect that I'll finish them this weekend, as I should will have a little more free time than usual. 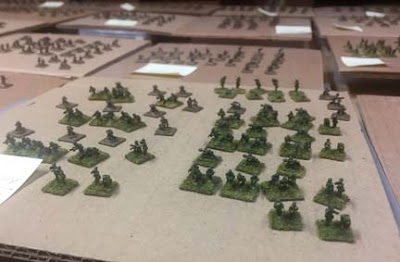 GHQ 1980s US Infantry, curiously,
they look a little smaller than GHQ's Vietnam era US troops.

As my 6mm Cold War project has hit a period of relative un-excitement, I've also been tinkering with my 28mm Post-Apoc game.  Last month I finally got three new factions organized, painted one, and ordered figs to wrap up two others.  In an effort to feed my creative hunger, I also designed some terrain associated with the factions, and expanded the back story to accompany them.   Unfortunately, my work table is occupied with thousands of 6mm Cold War infantry, so I have nowhere to build the terrain. 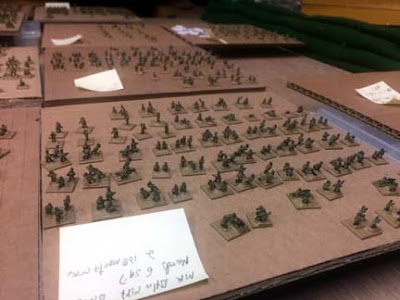 A battalion of Soviets from H&R, again newer sculpts,
will serve in the 1978 to 1982 time-frame, in two different world wars.

As it turns out, the manufacturer for the post-apoc figs is MIA; they took my money and sent no figs, won't reply to e-mail, nothing.  My second order (different company) for bits associated with the newly designed terrain has gone the same route.  I guess given the world situation, these things are bound to happen.  I hope that the people on the other end of my orders are doing okay and staying well.

Luckily, I found a source on E-bay for a replacement for the most critical fig for one of my new factions, and the seller seems to be a stand-up guy, great comms and item arriving early and all, unfortunately my purchase, and someone else's got reversed, so I received some stuff I didn't order, and the fig that I ordered is lost somewhere out in the wastes,  poor little guy, even if he is destined to be a maniacal overlord.

One seriously bright spot in recent weeks was a reply to a e-mail that i had sent to Armaments in Miniature inquiring about some Vietnam era aircraft that Dave (you can e-mail him at aim_schmid@yahoo.com) has been working on.  As it turns out AIM has three new 15mm (1/100) scale models available; the OV-10, the A-37, and the O-2.  As the OV-10 is maybe my all-time favorite military aircraft, and the Dragonfly isn't far behind, I was quite excited.  Still am.   I immediately ordered two each of the OV-10 Broncos and the A-37s, and a single O-2 "Mixmaster" at $15.00 each.  You will need to e-mail about these models, as he simply hasn't had time to update his website.

If you haven't seen any of Dave's work, his models are among the most finely detailed and cast models, that I've ever seen.  Simply beautiful work, and perfect quality.  Dave mentioned that he has decals for the models  (Black Ponies for the OV-10), though I didn't order them, as my Broncos and Mixmaster will serve in Europe in the 1970s , and I still haven't chased down the markings that I'll need for the 601 Tactical Observation Wing (or whichever variant of the name it was using during the years of service of these aircraft).

My A-37s are intended to serve in my fictional African campaign, so I've already made up decals for those.  Though I guess they could arrive as part of an intervention force, its not written in stone yet.

Anyway, my AIM order will be shipped next week, and I'll post some pics of the models as soon as I received them.  it will be good to have a little boost for my 15mm Col War project.  It has been lingering a bit, as the infantry that I was depending on have become unavailable.

Enough rambling for now, I'm off to the dungeon; its time to flock.

Only Five More To Go

I had another productive weekend with 151 stands of French, West german, and British troops completed, and now have only 5 of 47 6mm infantry companies left to paint.  I'm wrapping it up with the British, as I struggled for quite some time, trying to decide how to paint the DPM uniforms, and have saved them for last.

I ended up giving up on 6mm camouflage uniforms, opting instead to try to decide on the color they generally assume at such a distance that you cannot distinguish the camo pattern.  This has resulted in rather bland infantry, but then again, the goal is to get these on the table before I'm not around anymore.

Anyway, here is a pic of some of the British on my painting table, a busy place of late.  The bigger figs on the right are 28mm post-apoc factions waiting for a few stragglers to arrive in the mail. 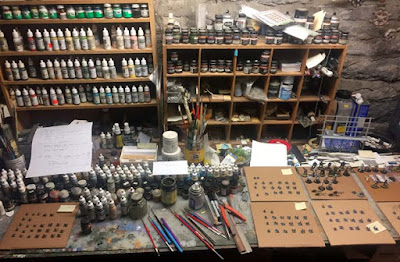 Hoping to be done with infantry this weekend, then moving on to a few buildings.

Posted by irishserb at 6:12 PM No comments: