A Home for the Holidays

A couple of years back, I started working on buildings for my "Out west Town".  Not a real town, but more of a modern version of that isolated little town that has the misfortune of staring in every "B" movie that comes along.  It was to be a collection of buildings, some based on things from my childhood, others on Route 66 type Americana, some just subjects for games, like the "Birdman Museum".  Many of these would also be part of the city for my "Cops and Robbers" games that I someday intend to run.

Anyway, I wanted a few houses, a couple older style, a couple newer,  a couple fancy, etc.  I find it easier to build models of things that really exist, as dimensional and design issues that I might overlook  with original designs are already worked out for me in the real world. So the thought occurred to me to base a model on my in-law's small ranch house.  It would be a fast build as it is a fairly simple design, would be one story for easy access to the interior, and I could estimate the dimensions and do up a sketch real quick like.  I sketched it out for 1/56 scale, and modified it to accommodate figure bases, and went to work. 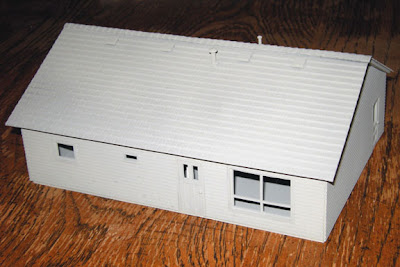 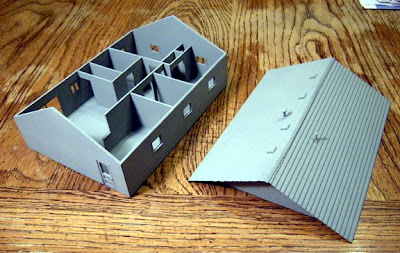 The model measures roughly 7"x5"x3", and was constructed entirely from plastic, mostly Evergreen styrene with the textured roof panel being the old Holgate & Reynolds shingles in whatever plastic they used to use. The model as shown is primed, ready for paint and detailing, though still needs the simple flat-roofed porch.

I mentioned it to my wife, when I got it to the primered stage, explaining that it would participate in alien invasions, zombie sieges, attacked from mutant beasts, etc.  She thought that it was cool, and decided to show it to her parents, when we went to visit.

Her parents loved it.  After a little while, her Dad disappeared with it, taking it to the their neighbors to show it off.  Some of my wife's siblings showed up during the visit, and very much to my surprise, it was a big hit with everyone. They were a little confused about its purpose, as the whole idea of aliens and zombies and games doesn't really get across to them too well, but it was all cool.

So.... at some point the question came up, "Can you build one for us?"  Time is my biggest enemy, so I try not to commit to too many outside projects.  So I took a few dimensions (too few as it turned out), some pics, and shortly before X-mas, my wife announced that I was building a gift for her parents. I had taken some time off around the holiday, mostly with the hope getting some work done on my post apoc terrain.  Joke was on me. "But they don't even game!" didn't get me out it.  And so...

I built the in-laws house.  Between the time that I took the pictures, and the time that I built it, they did some remodeling.  So I built some of it twice (or should that be three times).  The in-laws house is all plastic, built in 1/60 scale (a little easier to crank dimensions than in 1/56, plus they won't be putting based 28mm  figs in it. 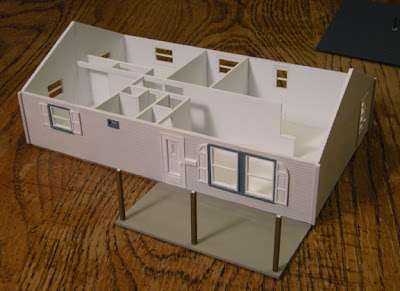 So my post apocalypse sets unfinished, as does my "out west town", its birdman museum, and its little ranch house, but the in-laws got their home for the holidays, and they and my wife are happy.
Not quite what I had expected to do over the holidays, but I did enjoy it, and I might still get the New years weekend for my hobbies.  What?  It could happen.
Posted by irishserb at 6:54 PM 4 comments:

The way it is working out, I guess I'm going to post weekly updates of my post-apoc terrain project, and here is yet another. 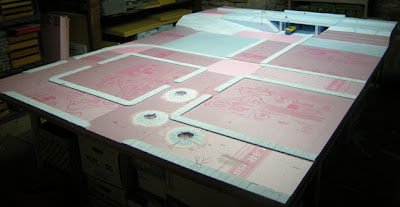 The bridge was constructed from various strips of blue foam cut on the bandsaw.  The decks and walls were then glued with a artist's matte medium, and held together during drying with straight pins. 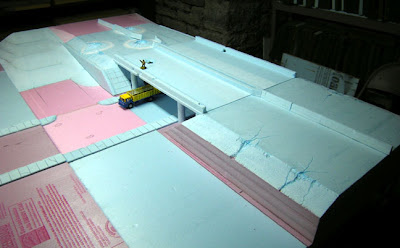 ﻿I got some of the erosion damage done to the south section of the highway, but still haven't added the retaining walls. 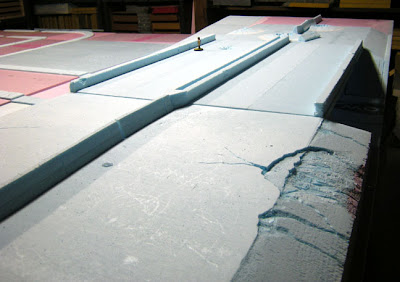 ﻿
A view under the bridges. 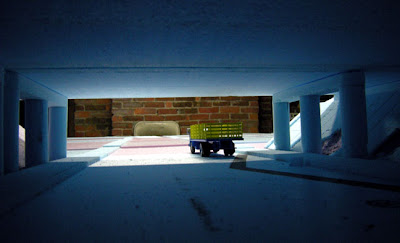 ﻿Still a ton of detail work to do.  Each end of the two spans is supported by three columns and a horizontal beam.  The columns were cut out of one inch square foam strips by tacking a 1" diameter washer to each end and cutting it round with a hot wire.  They ended up needing very little touch up and were much easier to cut than I had anticipated. 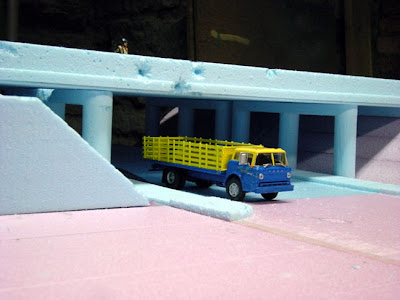 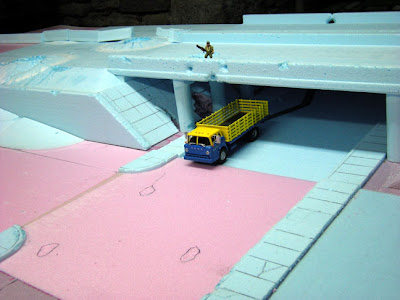 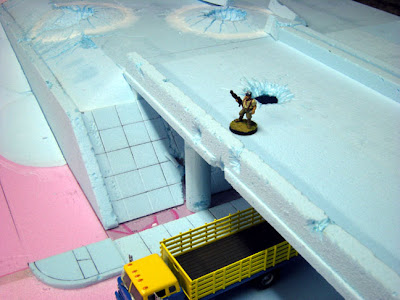 The photos above show battle damage to the southbound span of the bridge.   Tank gun scars, a bunch of pock marks from small arms, and an artillery shell hole through the deck of the span have taken their toll.  Eventually I will add lots of debris under the span from all of the fighting.  Most of the damage was made with a hobby knife and a hotwire "pen".

Last is a view with the southbound span removed, showing the columns. 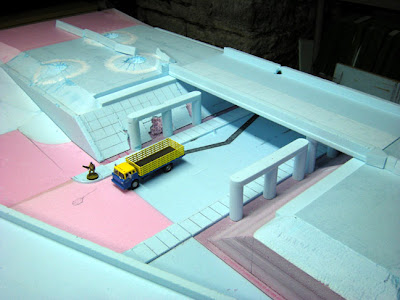 Again, I won't get to do much if anything on the project through the week, but hope to finish the highway construction and ramp next weekend.

The Apocalypse Creeps Along

I managed to get a little more time in on the end of the world, so thought I'd post a few pics.  I've managed to get the rest of the highway glued together, cut, and started damaging and eroding it. 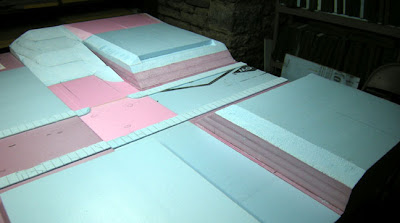 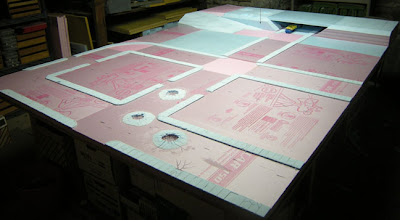 I've added some shell craters and damage from erosion that can be better seen in the photos below. 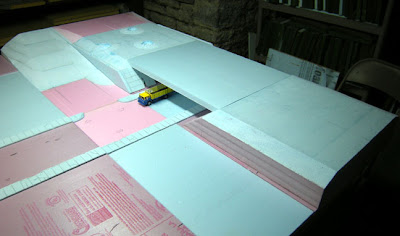 The bridge will actually be two spans, side by side.  Each will be 24 inches long and about 8.75 inches wide with a narrow separation between them.  The actual bridges are made completely from concrete castings, and are supported by six columns and a concrete beam near each end, located just outside of the sidewalks below the bridge.  The truck shown in  the photos is 1/50th scale. 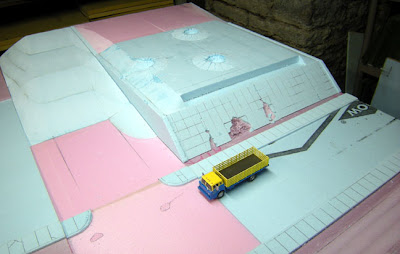 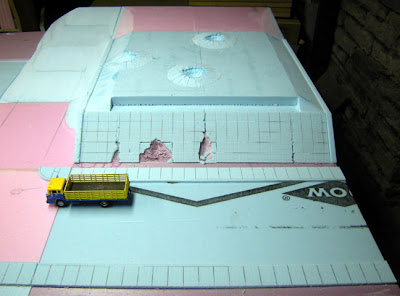 the photo above shows erosion and decay of the concrete panels under the bridge.  The erosion is in line with where the drains on the outside edges of the bridge would line up, and centered between the spans. The area of missing concrete tiles is damage located under a shell hole that will be located in the "southbound" span. 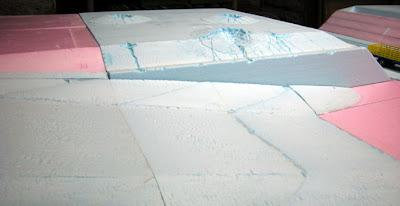 I'm hoping to finish the highway and bridge this coming weekend, maybe get the roads puttied up as well.  Only making small steps, but at least it is progress.  Engineering the end of the world takes time.
Posted by irishserb at 6:57 PM 3 comments: