This past week, when I wasn't working on aircraft data, I was working on 6mm infantry.   Here are a couple pics of my WWII French, completed over this past week: 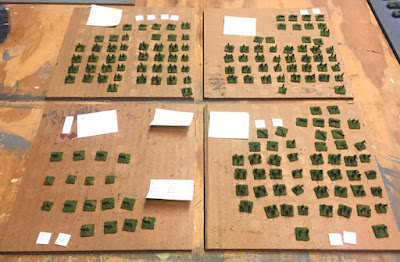 There are still a few stands, mostly gun crews to finish,
when they arrive from H&R. 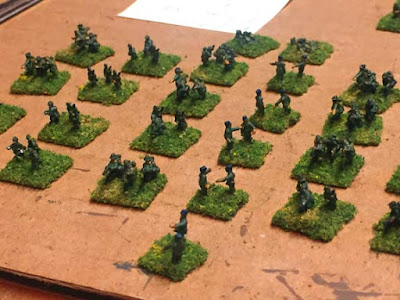 Figs are combination of GHQ with a few H&R; surprisingly,
it is not easy to tell them apart from a distance of more
than about a foot and a half.

Next up are the Germans... 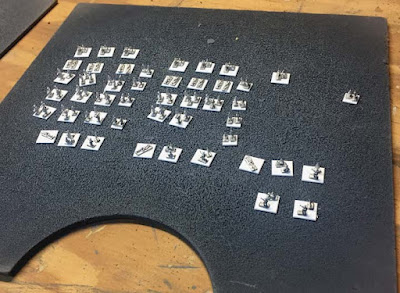 One of five trays of Germans, H&R.

... if I can ever remember to buy a can of primer.

Last weekend, in support of my 1940 France miniature ground battles, I figured that I'd update and fill in blanks in the WWII portion of my air combat "rules".  They are not so much a set of game rules, as a stand-in to quickly resolve air combat elements permitting the play of the ground battles.

Originally conceived around 1985 for Cold War missile laden air combat, the system included aircraft from about the mid-1930s for WWII.  I had never really used it a lot for WWII, and as I started adding a bunch of 1940 aircraft, I realized the range of values in the system were too narrow to allow much variation between aircraft.  I mean, a Bf109E and a D.510 shouldn't quite be an equal match.

Anyway, it went from a couple hours of filling in the blanks, to 25 hours of pretty intense number crunching and partially reinventing the system.  Add in a couple hours per day through the week, mostly early morning before work and lunch breaks, and I got everything to a workable state. 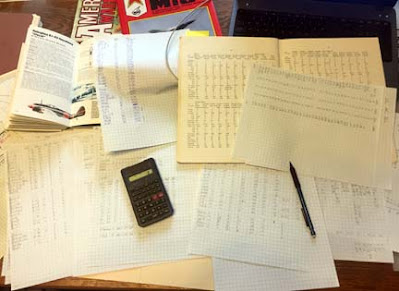 Typical of the mess that I create, when working on stuff like this.

In the mean time, the first of several aircraft orders arrived from I-94 Enterprises, ordered Friday, shipped Saturday, and arriving Tuesday.  Amazing service.  Decals from Flight Deck Decals arrived a couple of days later, so plenty to do in the coming days. 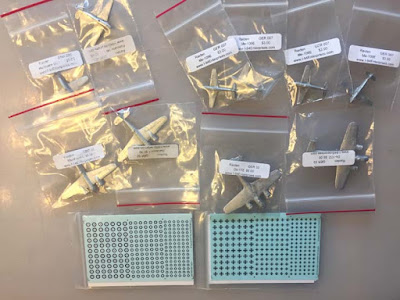