I've spent much of the last few weeks in a sort of hobby limbo, with some of my free time occupied with making masters, molds, and casting.  And much more of it spend waiting for glues, solvents and molds to set up or dry.

My paint table, build table/casting area, and game table (plus a few other spaces around the house) have all generally been filled with molds, masters, and castings.  And it seems that no matter how impatiently I watch these drying processes, they simply will not speed up, feeling no sense of urgency what so ever.

So this past Sunday, I had gotten to the end of mastering the buildings and boxing them for mold making, and while searching for some lost models and bits, ended up with one of my tables covered with trays of Soviet vehicles.  Somewhere between 900-1000 micro scale models, roughly half of which need painted or re-painted, just screaming for attention. 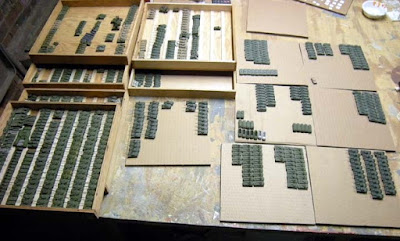 About 220-240 miniatures fit in the larger wooden trays, and I can
fill about five of them with Soviets.

So much to be done, so much time wasted, watching stuff dry.  I cracked.  Needing a fix, I managed to clean off the front edge of my painting table, and started an assembly line of Soviet tanks and vehicles being prepared for battle.

T-62s, T-55s, BTRs slowly began moving along my table, receiving successive stages of cleaning, primer, base coat, finish coat, tracks, weathering, etc.  Comrade Khrushchev would be so proud.  A couple of hours painting on Sunday, 15-20 minutes a night since, and about 120 vehicles are in various stages of paint.  The first 20 are done. 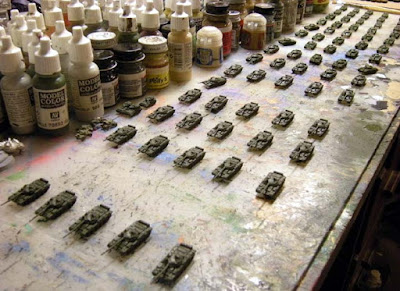 Work progresses at the tractor factory,
with T-62s coming off of the line.

I'm going to alternate between casting for orders, and painting Soviets over the holiday weekend.

Though slowed somewhat by an ailment and casting vehicles, I have managed some progress on the next batch of 6mm buildings for my modern African imagi-nation project.

The next batch of buildings consists of 4 house "compounds".  Each consists of three or four structures, wall sections, and a gate.  The plan is to cast them each as kits of around 10 pieces, which will then allow for mix and match variations, as well us using some buildings as free-standing structures.

I still have a little cleaning up and detailing to do, but here are some pics: 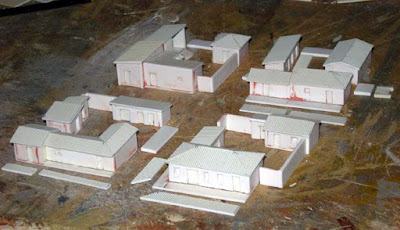 Awnings for the buildings set in front of where they will eventually attach.
Additionally, some wall/gate sections are laying flat. 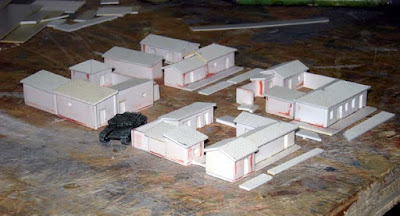 I added the GHQ Centurion to give a sense of scale.  Each
compound fits in roughly a two inch square footprint. 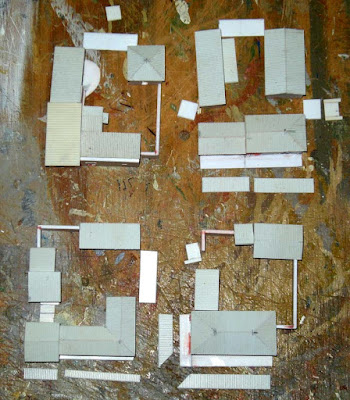 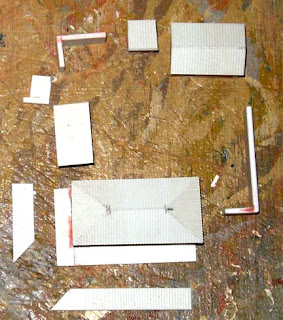 The last photo shows the compound in the lower right
of the third photo with all of the parts separated to
better show the individual pieces.  This one has four
buildings, two wall sections, a gate, and two separate awnings.

It will probably be Wednesday or Thursday night, before I get a chance to finish them.  Can't wait to get them done though, so that I can cast and paint up of few of these guys.
Posted by irishserb at 4:44 PM 6 comments: