Misc. Projects and Whatnot

Been working a lot (day job, not the hobby) since the last post, and between lack of time, energy, and plain old sore and stiff hands, I haven't made any progress on my APC, but have been doing what I can otherwise.

After re-discovering so much stuff for my colonial adventures that never got used, I've begun to start the process of rounding out the history and fluff for the many scenarios that never got ran.  This has mostly been a lunch time reading and research project thus far, but will eventually lead to miniatures and modeling.

I did have to throw out most of the uncompleted buildings, as they were basswood construction and got water damaged in the flood, but otherwise everything else seems to be intact.  The docking station for the airship, and winged version of the airship, bits for a narrow gauge railway and gold mine, all good.  Also found bits of the incomplete ships, and the hulk of my French ship, which was in the trunk of my car, when it got rear-ended and totaled (both ship and car). 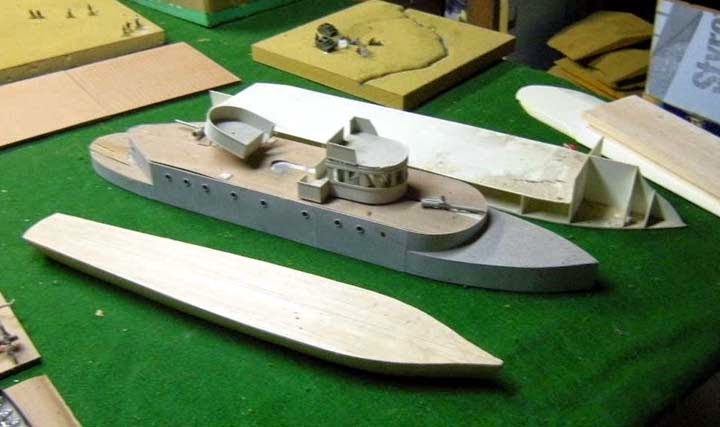 Above, the start of a hull for Bully Hayes ship, the Leonora, my destroyed
French destroyer and a German gunboat.

In time, I intend to resurrect Ponape  as a convention game.   I have faded away from the convention scene in recent years, but have to admit, that after going to Origins this year, I feel a little of the old spark again.

This was moving along nicely last year, until interrupted by my flood.  I haven't actually done anything with it recently, but it sets on a stool next to my paint table, ready to be worked on as soon as I clear enough space to work on it. 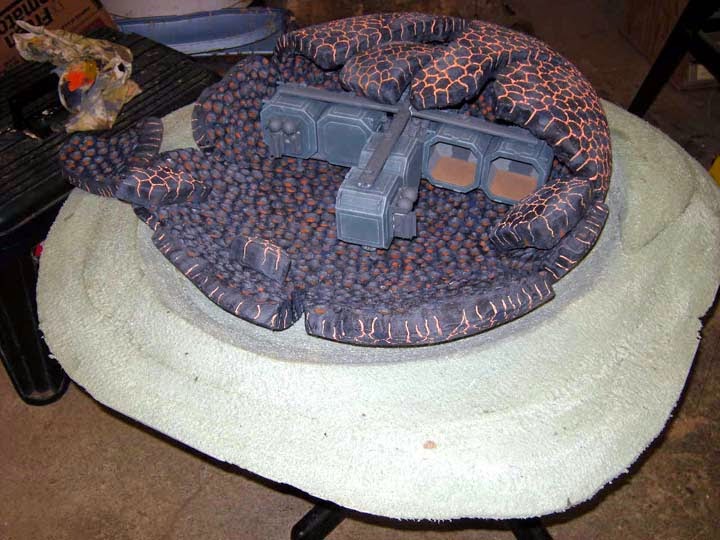 In addition to the bubble above, there are a couple of trays of bits in various stages of paint, waiting to be placed in the modules.  It will be a centerpiece for near future and maybe even post-apoc games at some point.


28mm Post-Apoc and Near Future Figs.

As I was sorting through stuff, I came to realize that I had a serious load of both painted and unpainted figs for near future and post apocalypse game.  This kind of got my juices going again, after more than a two year lapse.

As I discovered more an more figs, I started sorting them out into the various factions. 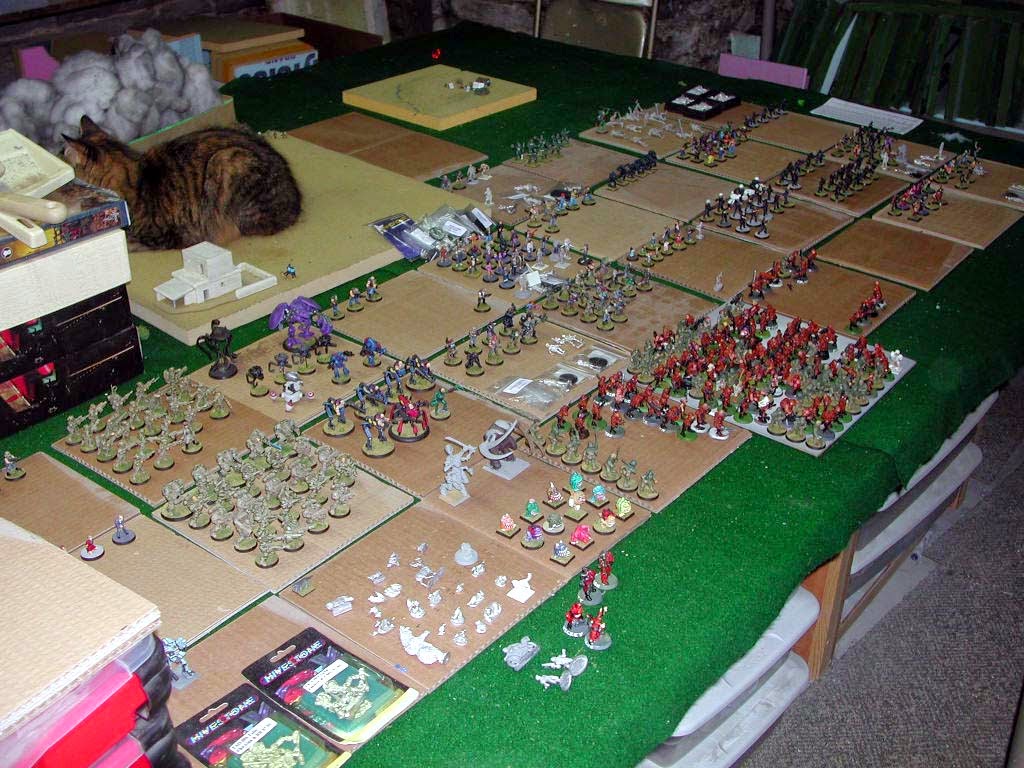 There are over 400 painted figs, about 400 unpainted, plus another 150 or so painted orks that I plan to use as mutants in the PA.  Portions of roughly 22 factions are represented above, some are pictured below: 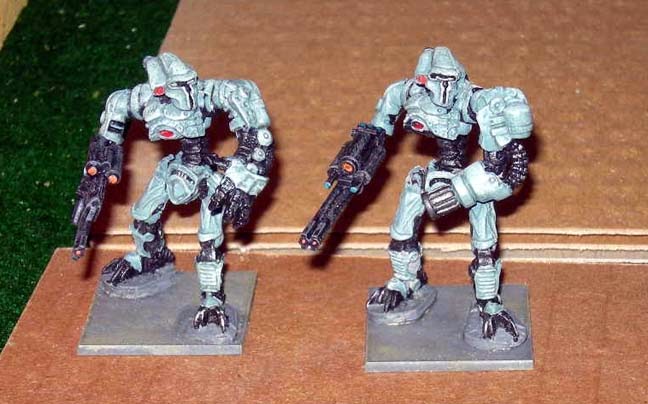 Kryomek robots with scratch-built weapons, security for the industrial complex. 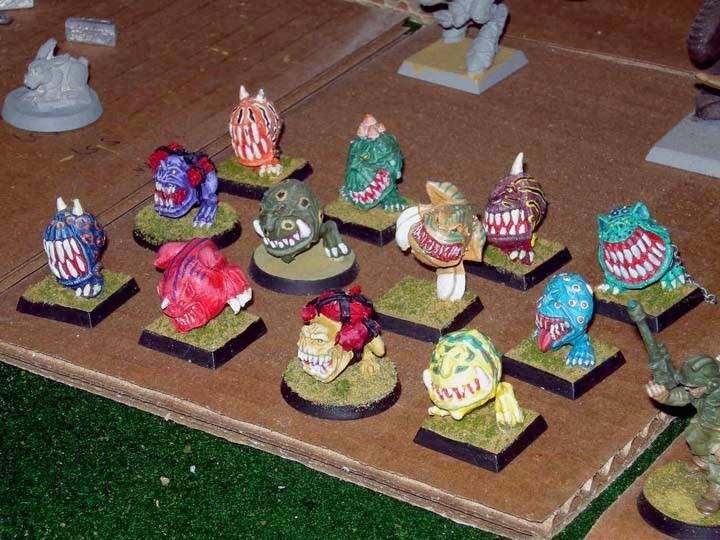 A colorful heard of mutants, hungering on their tray.

Miscellaneous mercenaries, some work together, others have additional help. 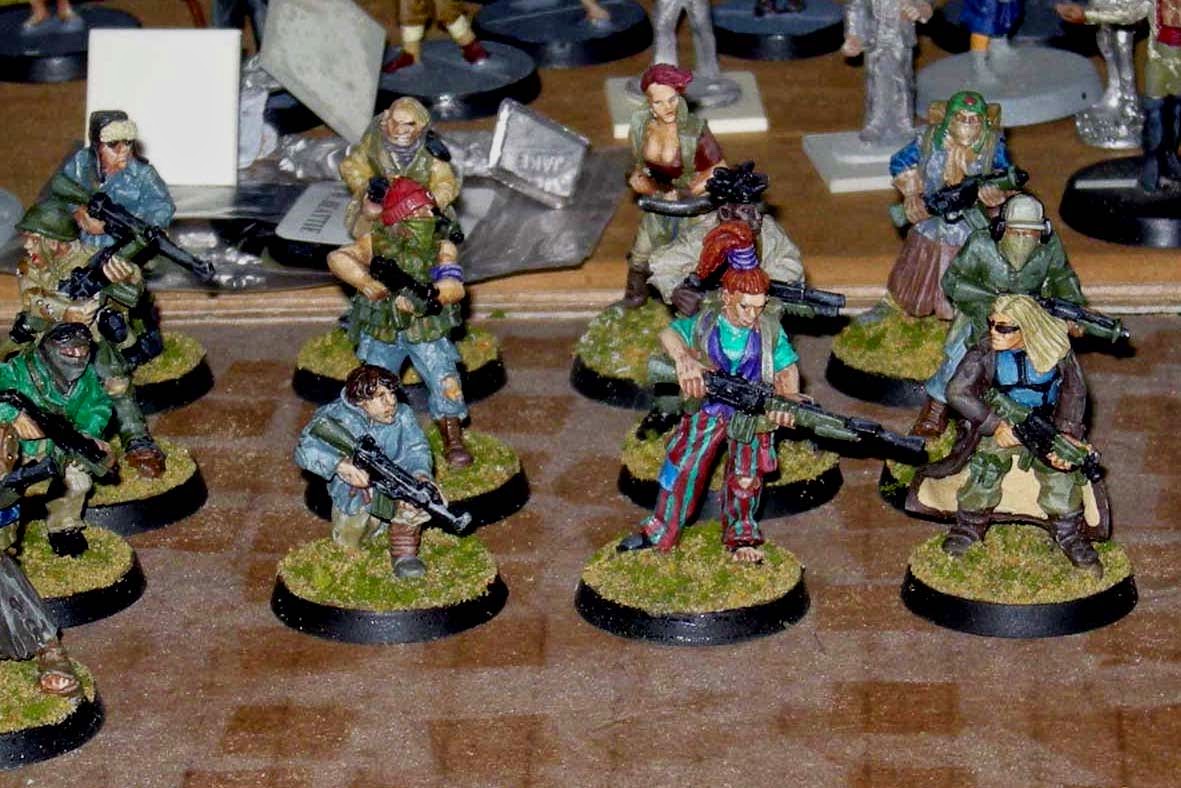 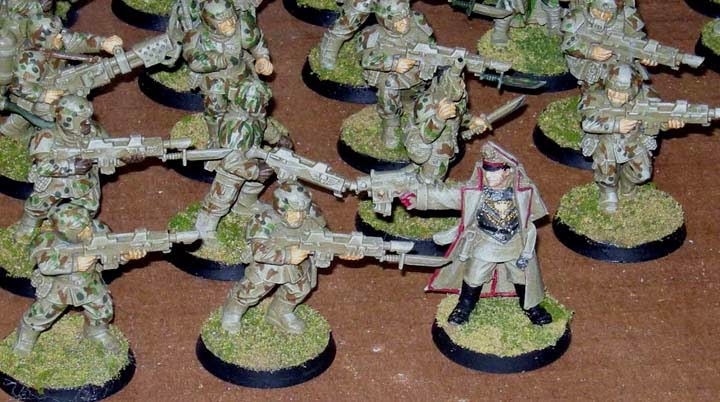 Could be corporate or Federal troops, wouldn't trust them either way. 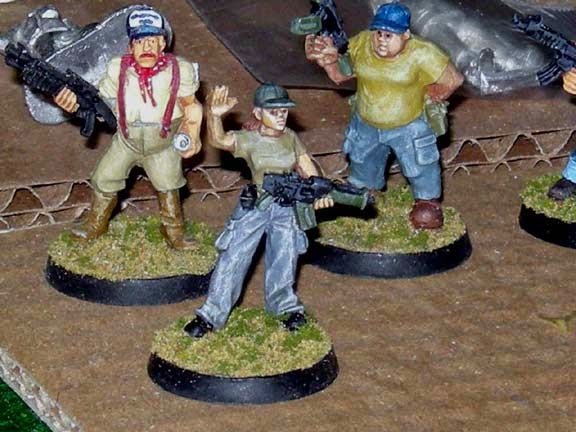 Billy-Jo, Bubba and Mack, god old boys (and girl) to the end and after. 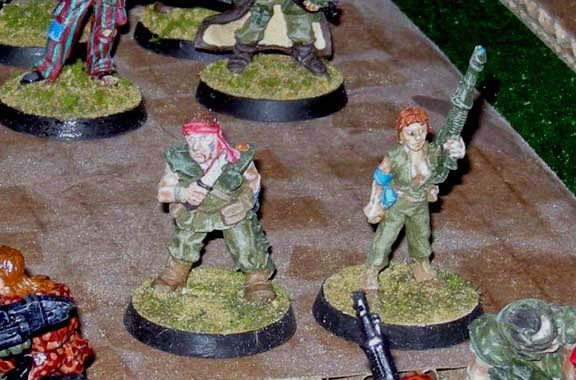 Two old Imperial Guard figs that make up part of the territorial defenses.
I've actually got an entire company of these figs, around 140 in all. Alpha Forge Asteroid Miners, pilots of the space bubble,
and a threat to the near future, and beyond.

I'm currently working out what I need to complete each faction, and purposing some of the many figs that don't currently have a home yet.

A second post-apoc project that I've been tinkering with will bring a little of the Texas Israeli War to the table top.  I've got six factions and armies in mind at the moment, but only a handful  of unpainted figs for now.


So that is what I've been tinkering with in recent weeks in place of doing any real gaming.

WIP: Another Update on my 28mm Sci-Fi APC

Well, since it is the only thing that I have going on, while working stupid hours at the day job (they just have no consideration for my hobby), here are the pics of the latest progress on my 28mm APCs.

The biggest accomplishment is that I've roughed out the suspension, I've also finished the basic hull shape and started working on a low profile turret. 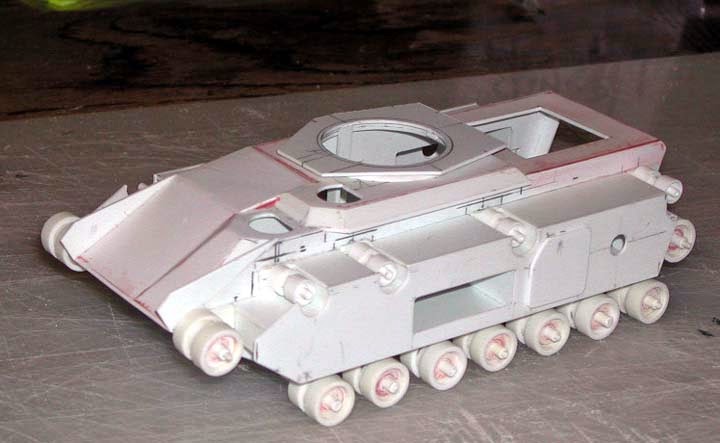 The Hull with wheels, no track yet.

With a space marine and Copplestone scavenger for a scale. 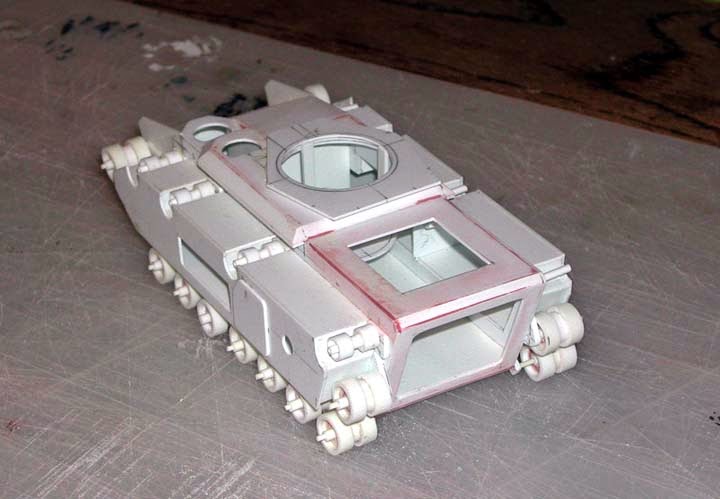 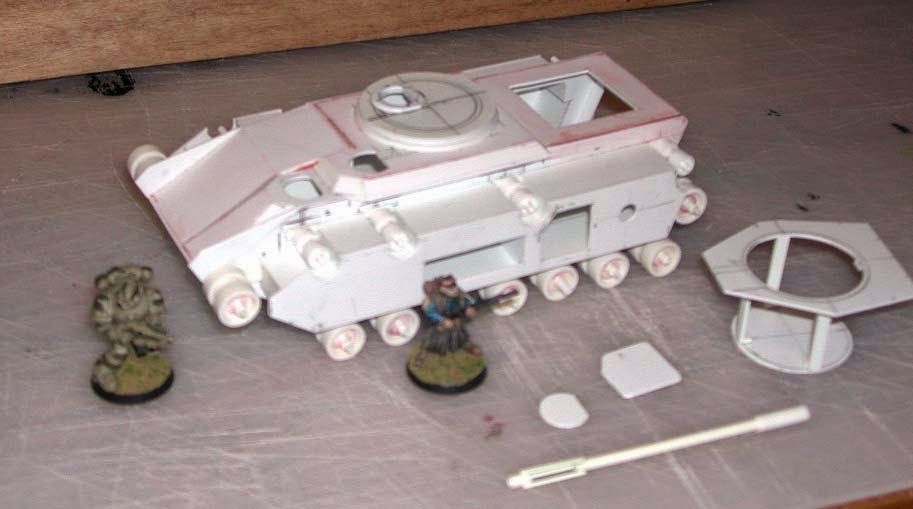 And, with the beginnings of a low profile turret.
I think that I'm going to cast the wheels and track links, rather than scratch-build them all.  Don't know that it will save much time, but will reduce the wear on my hands and fingers.

I still don't know what the heavy turret will actually look like, but I did work out a low profile turret, and think that I will go with three of those and one heavy per for the platoon.

I toyed around with retractable hull side weapons in the sponsons, and just don't like it.  Just seems like too much of a risk of armor integrity in combat, and just didn't like the look.  Not sure what I'll do with the weapon modules, maybe mount them in additions to my bunker, but don't know yet.

I've build up the side frames and cut most of the hull panels for the other three vehicles in the platoon, but want to work out details on the first APC before assembling the others

The project is moving along when I get a chance to work on it, just not much time for that lately.  I expect to detail the hull and finish the low profile turret for the next update.  Probably be a week or two.