A Night of Casting

Early in 1992 I began making masters of US armored vehicles with intentions of casting a US army to add to my growing 15mm collection. As things turned out, it would almost 18 years before I finally started casting my army.


I purchased some Old Glory WWII US infantry about 4 years ago, painted a bunch at the time, but didn't finish them up until this past December. A couple of weekends back I finally got around to casting up my American armor. 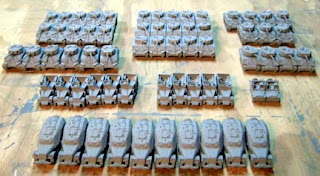 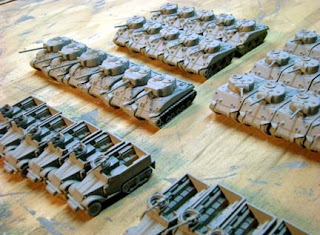 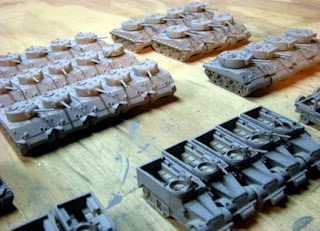 I also cast some of the parts for platoons of M10 and M32 tank destroyers, and will finish these and castings to complete companies of each type of Sherman and halftrack in a couple of weeks (the next time I am likely to have a window to do some casting).

The castings were made from a combination of Vagabond and Alumalite resin in molds of Dow-Corning HS-III. They have been primed gray for the photos.

In all, I spent about five hours casting vehicles and will need another two hours to complete the remaining minis. Hopefully, it won't be another 18 years before I get them painted.

Over the last few years, I've really focused on figure painting, while letting a lot of other projects set. This year, I am going to try the reverse. I don't have a tons of figs that I need to get painted, but I do have a tremendous number of terrain, building, and vehicle projects that range from being ideas sketched on paper to half built obstacles taking up space in the basement. My goal for the year is to finish the following projects:

Riverine Terrain - Complete a modular section of river with at least one canal, an old church, bunkers and a village site inspired mostly by the book "Riverine". This will consist of roughly 78 square feet of modular foam terrain.

Village - Complete buildings for a Vietnamese village, starting with the Britannia hooches, then either add a few from another manufacturer or scratch-build them.

US vehicles - Finally make castings of US vehicles that I mastered in the early 1990's. Complete at least one company of Shermans and M3 halftracks, and several supporting platoons of various types.

Airport - Build airport/airbase for scenarios in my fictional campaign. I have several scenarios taking place at an airbase/airport.

Presidential Palace - Build a presidential palace for the Mugabian president. I'm guessing that I'll need it at some point, and expect that it will consist a few modular buildings that be used as freestanding buildings in the meantime.

Houses - Add at least 7 more houses and small shops to my collection of African buildings.

T34/85 - Complete master and cast a company for the Mugabian army.

BTR152 - Cast a company of BTR152s. Pulled the first couple of castings this past week.

M2A2 - Complete/modify the master and cast a company for my US troops.

Gaz66 - Complete and cast a bunch of trucks for Soviet convoys and various duties in Afghanistan and Africa.

Ayers' Farm - Paint the house and complete the farm buildings for defense from alien intruders.

Ayers Family - Pick up and paint figs for the rest of the family defending the farm.

Post Apocalypse Terrain - Finally build the ruins of humanity. This will be a modular system for ruined cityscapes, and the initial build will involve at least 54 square feet of modular foam terrain.

"Out West" Town - Complete the buildings that I have had half done in the basement for the last two years. Think route 66.

"The Hood" - Based on part of my childhood stomping-grounds, will provide the core of an inner city for contemporary/near future/ post apoc games. Involves completing several buildings already started and adding a few more.

Birdman Museum - Complete the birdman museum for the "Out West Town". The museum is inspired by those many roadside museums that I saw as a child and will feature artifacts of the ancient "birdmen". Much to the surprise of the towns people, the birdmen will be coming for their holy relics.

Scavenger Village Expansion - Additions to my post apocalypse scavenger village will include a couple ruined buildings/hovels, debris/junk heaps, and other various detail items for the village.

Contemporary Police Station - Build a police station for "The Hood". It may or may not double as a station for the "Out West" town.

Near Future Police station - Build either a new structure or more probably a futuristic addition to the contemporary police station for various near future scenarios.

Beetle Utility Transport - Build the "Beetle" transport aircraft , a companion to the Wasp, for my Imperial troops. Sort of a sci-fi "Huey".

Imperial APCs - I picked up a Landraider kit a couple of years back and decided that I almost liked it, but there are just some things that strike me as being "wrong". I struggle with the silliness of GW designs. I realize that they work in the 40K environment, but my IG/SPace Marines serve in more "down to earth settings" too. So, I decided to scratch-build them the "right" way. I made some sketches and put them in the stack. Hopefully I can finally get some rides for my Imperials this year.
Posted by irishserb at 5:29 PM 2 comments: