A few weeks back I asked the membership of TMP what the "must read" post apocalypse sci-fi books were, as this a favorite gaming genre of mine, but so little of my sci-fi readings had related to it.

I had hoped to find a number a books that might help me include "must have" elements in my games that I might otherwise overlook, and hoped that I might solidify my plans for my gaming terrain. Additionally, I figured that I would be able to lose myself in a lot of good reading.

I particularly like building terrain, and the terrain of the post apocalypse offers such a rich environment to explore creative and artistic boundaries, permitting historical, fictional, and even personal elements to manifest in the collective result.

I musty say that my preconceived notions leaned heavily to the dry, barren, wasteland type of environment. Not at all original, but "logically" resulting from what I perceive as the most likely causes of such an event: war (nuclear, chemical and biological, as well as conventional), followed by famine and plague.

I started my PA reading by rereading the Texas Israeli War, which fits perfectly even if overly "pulpy". I even have a 1/56th scale Centurion master started, so that I can create a band of Israeli mercenaries somewhere along the way. I imagine that the son's of the Alamo and some form of Texas Rangers will defend the great nation of Texas in my PA world.

That was followed by a reread of A Canticle for Leibowitz, still my favorite, and again presenting a world damaged by the "flame deluge" of nuclear war. Since originally reading it, I had planned for the abbey to be a key landmark in my PA gaming world and figured that the book burning "simpletons" would be there too.

Over the last couple of years, I had considered doing alien worlds of ancient ruins, more "foresty" PA settings set in the eastern or very north western US, and a semi water-world full of lush greenery and permeated by a web of streams/lakes/waterfalls. I sketched out maps and terrain concepts for each of these, considering the challenge and burden that each offered. But, I kept coming back to the barren wasteland in the end.

As a result of my TMP request, I have read Footfall, The Road, Earth Abides, and Go-Go Girls of the Apocalypse. I have enjoyed each of them very much, and have gotten ideas from each to expand my gaming in some way.

The suspense of The Road is outstanding, as is the intensity of the relationship. I don't think that either of those aspects will translate well to my gaming, but I was intrigued by how gray the world in the book was. While I have seen 40K and similar gaming worlds treated this way, I have not seen near future PA settings presented in such a fashion, and feel some need to add more gray and less yellow/tan to my gaming future. I really hadn't considered the impact of huge fires in the PA world. it is so sometimes so hard to see the obvious. The Road also confirmed my perceived need for cannibals to be a part of the PA future. While not a new concept to me, the manner in which they are present will be more intense as a result of The Road.

Earth Abides deals with a PA world (set in California) resulting from plague. This is a pretty deeply philosophical book exploring the psyche of our hero, that of society, and of the changes to the physical world and ecology as a result of man being largely removed from the world. While this book really touched me regarding the value of much that we hold as important, the value of life, and the fabric of societal evolution, it 's gaming impact relates to the the modeling of a slowly decaying world, and likelihood of peaceful, undefended settlements in the PA world. I really had been blinded by the idea that settlements would be almost uniformly fortified and actively defended. Now I need to reconsider the magnitude or frequency of that. I guess it greatly depends on the type of PA event(s) that brings about the setting for my games

Footfall touches on my intent to keep the game open to alien invasion (no point in slamming any doors on the unfortunate survivors in my PA world). What I hadn't considered was the possibility of aliens rapidly "terraform" earth into something more to their liking . I also like the idea of the aliens being particularly bigger and far less agile than humans.

Go-Go Girls of the Apocalypse is a series of games waiting to happen. It is fun, pulpy, silly, unlikely, but screams for the tabletop. No doubt some sort of train, Joey Armageddons, and a Wild Bill/General Custer looking character will turn up in my PA games. Maybe an airship too. Definitely an inspiring read for the whimsical gamer.

Anyway, those are my evolving thoughts at the moment. I plan to read another 8-12 titles over the next two months, and adapt and evolve my terrain ideas in accordance with my "research". I may not have a lot of originality in my final result, but I hope to make it dynamic if nothing else. I figure to have a solid layout mapped by mid September, and dedicate my free/vacation/holiday time to terrain making during the latter part of the year.

Posted by irishserb at 6:06 PM No comments:

A Little Progress in Vietnam

During May, I decided to try to build up some of the many kits overflowing from my shelves. Many are items I've had for years. As shown in my last blog entry, I had started my M113s, a birthday gift from my wife and daughter from about four years ago. This month I managed to get my M113s and a single M48 assembled and painted and then unpainted. I had them all done, except for the clearcoat. Then I got out the new can of Krylon clearcoat and proceeded to give them all a coating of white. I managed to save the least damaged of the bunch, with lots of dry brushing to balance out the olive and re-weather it. The others all need repainting. The M113 that survived is the least "dressy" of the bunch, not having any of the graffiti that the others had. Here are a couple pics: 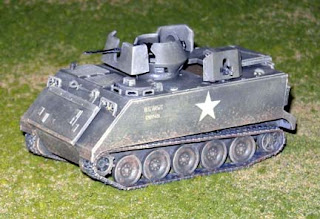 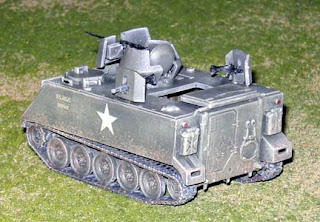 While researching markings for the M113s, I found a great collection of M113 pics here on Flickr:

Although I had planned to get back into Vietnam gaming for several years, I had never really intended to get into the riverine part of the war. Then I randomly pulled this book off of the shelf and started to read: 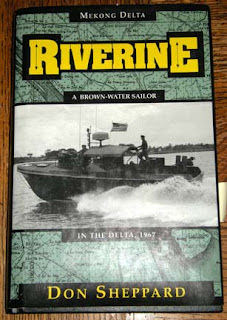 "Riverine: A Brown Water Sailor in the Delta, 1967" by Don Sheppard is an outstanding account of his experience on the Bassac River as Commander of River Division 51. Sheppard shares his personal struggles, the burden of command, and offers detailed descriptions of the battles.

Despite working on the M113s, my focus is mostly on building what I need for riverine battles on the Bassac. The next step is to complete a couple of UH-1B helicopters from HAL-3 Seawolves. These are fire support gunships that supported RIVDIV51 operations. They are a frequent part of operations described in "Riverine", and I found a great site for the Seawolves here:

That's all for now, hopefully pics soon of my other M113s, M48, a couple of Seawolves, and maybe some ramblings about post apocalyptic terrain.

Posted by irishserb at 12:24 PM No comments: