I recently delivered a master of a 15mm french Laffly W15TCC tank destroyer to Craig at Gaming Models and thought I'd post of a couple of pics.  These were taken a little before completion. 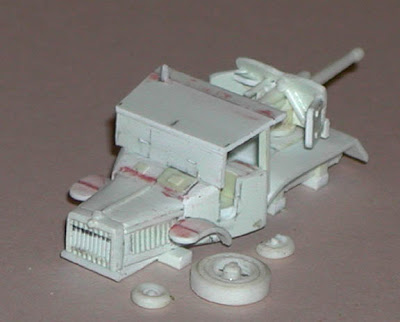 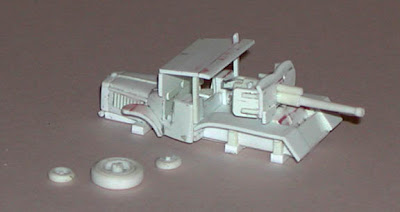 Craig is currently going through a major mold replacement project, so it might be a little while before he gets the next batch of new items added to his page, but there are more coming, in the short term, particularly for the Japanese forces.

I've been out of town for several days, but prior to that had been quite busy working on my ERC90, which is coming along nicely, and on a M-ATV for my modern 15mm forces.  Once these guys are out of the way, I'll get back to my post-apoc terrain, and probably start assembling some of the 1/100 aircraft kits for use in my modern African campaign, which has sat dormant for almost a year.
Posted by irishserb at 6:17 AM 3 comments:

Waltzing with Matilda in 15mm

In addition to my own projects, I have made a small number of masters for Gaming Models over the years.  One such project is Craig's upcoming 15mm Matilda I.  I've actually had most of this one done for some time, but have been piddling around with making the track assemblies, which have taken more consideration than most vehicles, due to the way the mostly fenderless tracks stand out from the hull.

Anyway, I'd thought I'd share a couple of pics.  These were taken when I was near to being finished with the hull and turret, but before I had done much on the track assemblies: 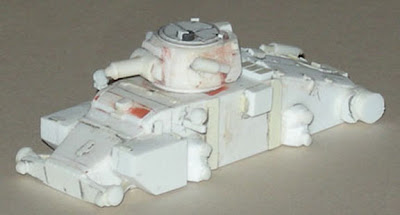 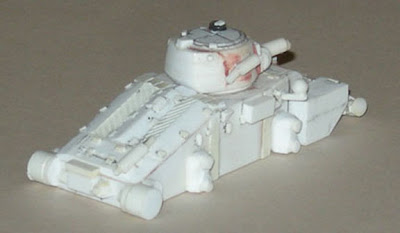 This has been an interesting vehicle to build as it feels very "Victorian", similar to the French Char D1 and Char D2 that I did sometime back.  Something about these prewar designs always strikes me as being so ugly, that they are attractive.  I'll be turning the Matilda I over soon, so that I can get on to some other early war projects.
The Matilida will be available soon along with the rest of Gaming Models 15mm line of WWII vehicles and landing craft.
Posted by irishserb at 5:46 PM 1 comment:

When I started gaming my fictional modern African campaign, among many things I began looking for 15mm modern French armor.  And, I was really surprised to find how few modern French armored vehicles were available in 15mm. As a result, I began my quest to fill some of that gap for my French, African, and Middle Eastern forces.

I am currently working on several vehicles, including the Panhard M3 apc, the VAB, and the ERC 90 armored car.  As it turns out, I am making the most headway on ERC 90 (probably because it is just the coolest armored car out there), and thought I'd share a few WIPs of it.  So here Goes: 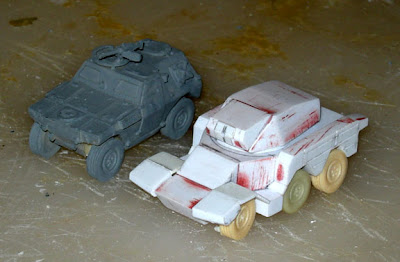 ﻿It is still in the early stages of construction, but with the fenders finally roughed out, it has really taken shape.  In these photos, it is setting on wheels from my VBLs, and is setting just a little lower (maybe .06 or so inches) than it will when complete.  The VBL is for size comparison.  The ERC 90 is very sleek looking, but has a noticeably larger footprint than the VBL. 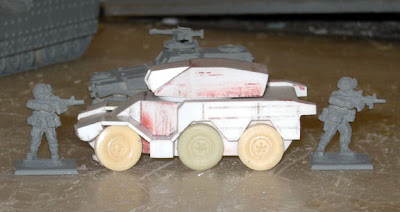 ﻿This side view shows it with two Peter Pig US Marines (which are just outstanding figs if you haven't seen them). 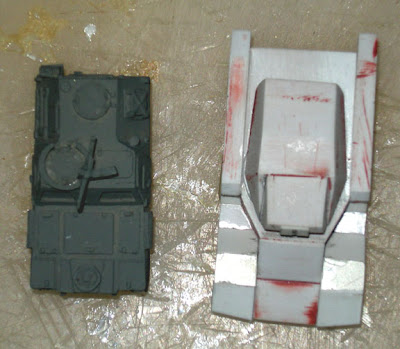 And lastly, the overhead view shows the footprint comparison between the VBL and ERC 90.  Still bit rough, but I hope to have it done by the end of the weekend.
Posted by irishserb at 2:47 PM 6 comments: