Some Greens for the Table Top

While my wife was inventorying the discount bins at the local crafts store, I notice a bumpy green ball amongst the many treasures that I was hoping would not be making the trip home with us.  On closer inspection, I discovered that the bumpy green thing was a ball about 4 inches in diameter, covered with an infestation of green leafy stalks.  It looked like something that might spontaneously sprout to life in a dark corner of the bottom shelf of a neglected refrigerator.  After determining that it was unlikely to be harmful, I realized that it was indeed a treasure that needed to return home with us. 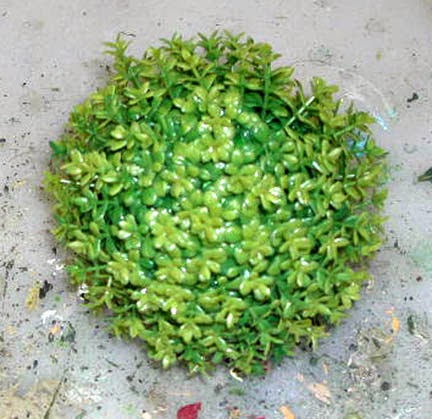 An alien life form?  No, gaming terrain in disguise.
I don't know what the thing was actually intended for, but it was loaded with small stocks of tiny leaves measuring about 3/16 inches long.  A virtual countryside of miniature foliage for my table top.  So this weekend, I brought out my box a greenery and got to work. 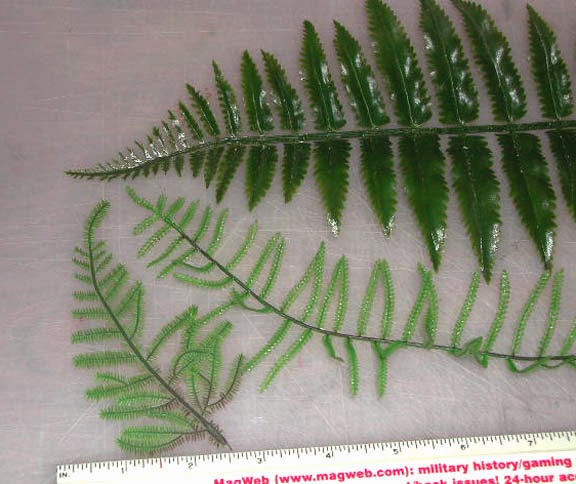 Some of the artificial fern fronds that I use for making jungle foliage.

I stripped leaflets off of my favorite plastic fern fronds, cut some bases out of scrap styrene, softened the edges of the bases with a Dremel and sanding drum, and armed by bottle of glue for some serious work.

A few washers were added as small weighted bases, with the centers covered over with thin styrene plastic.  I sanded the styrene on the washer into a domed shape to make the finished product a little smoother.

I made a assortment of single plants, as well as bases with clumps of foliage or small groups of palms.  The palms came from a model railroad supplier on E-bay a year or so ago.  I managed about 55 bases before using up all of the super glue. 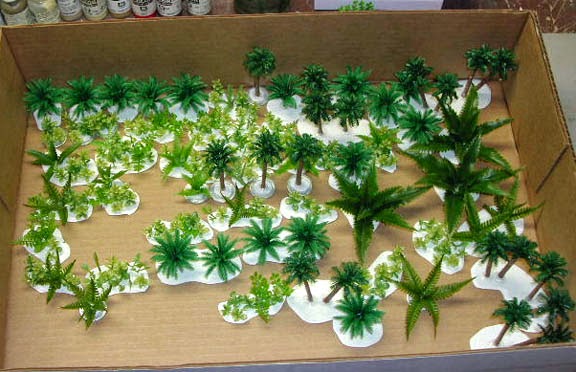 The last step was to paint and flock the bases.  I found an old bottle of Pactra military yellow of some sort (the label fell off decades ago), and once the paint was dry, I flocked with a mix of Woodland Scenics  flock, using artists acrylic matte medium as the glue.

Clusters of foliage largely consisting of stalks from my bumpy green ball.
28mm, 20mm, and 15mm figs for size comparison. 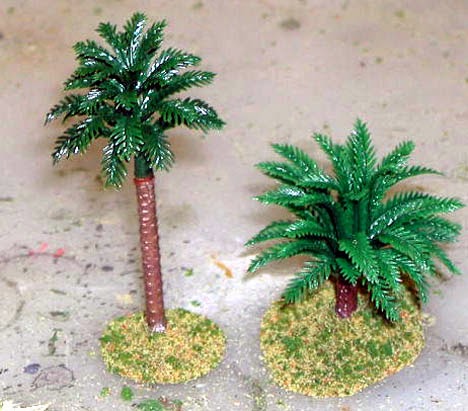 E-bay palms for use as 20mm palms and cycads in Vietnam.

The clusters of foliage will work with anything from 15mm to 28mm.  Some of the clusters feature only shorter plants up to about 3/4 of an inch tall particularly for use with my 15mmAfrican games.  All of the clusters can be used with 20mm Vietnam and 28mm Colonial and sci-fi games.

The fern leaflets serve to make nice cycad or fern fronds in the various scales, with the larger plants for 28mm games and the medium and small for use in 15-20mm.

The palms are some of the smaller ones that I intend to add to my Vietnam riverine terrain.  The conventional palms are only about for to four and a half inches tall, and may see some use in my African games, depending on the settings for the games.  The shorter plants on the stubby trunks look more like many of the cycads that I have seen, and will be used as such in my Vietnam settings, or simply as foliage for some sci-fi games.

After picking up some glue this week, I hope to do another round of gardening next weekend.
Posted by irishserb at 7:59 PM 3 comments:

A Miniatures Gamer's Perspective of Origins 2014

In recent years, I've become a bit of a gaming recluse, having faded away from very active involvement in HMGS-Great Lakes, and not having gone to a convention in years.  So, a couple of weeks ago, when an old friend got hold of me, and asked if I'd be interested in meeting up at Origins, it sounded like a great idea.

Origins (or Origins Game Fair 2014) is one of the premiere gaming conventions in the US, probably ranking only behind GenCon in size and scope.  Thousands come from all over the globe to participate in games of all genres; board games, card games, LARPing, miniatures, RPGs, and whatever else that I might have missed.  There is a large vending hall with artists, dealers, and manufacturers, an art show, auction, miniatures painting, and all sorts of things that gamers might be interested in.

I am basically a miniatures gamer, who likes a little role playing element in his games, and that has grown to a rather narrow minded focus in his old age.  Firstly, the terrain is more important than the miniatures, and my own gaming only spans colonial (including VSF with tanks), WWII to modern (I like tanks), and sci-fi genres (I like futuristic tanks too). But, I  do greatly enjoy seeing the artistry of any miniatures game, as well as the art and creativity of the costumes and creations of attendees and artists at a convention like Origins.  The creations of others are the inspiration for my own creations.  For me, conventions are about visual inspiration.

I arrived at the Columbus Convention Center at just past 9:00am on Saturday of the convention.  It was much like previous visits to Origins (I've been to Origins maybe six times over the years), with every manner of gamer scurrying about, a few sporting lasers, plate armor or fairy wings.

I made it to the registration desk at about 9:15 got in line maybe a 120-150 deep.  It was typical of my previous experiences at Origins.  What wasn't typical is the rate at which the line moved.  Previously, I had never been in line more than about 45 minutes.  But with the advancements in computer technology, the process was stretched to almost 90 minutes.

I met up with my friends, who had wisely managed to register the night before, and we were off to the dealer hall.  The hall seemed a little less full than in my previous visits, though by no means was it empty.  I don't know how many venders were present, as I never found a vender map or list.  The convention program was slightly larger than I remembered, but instead of the of the full color glossy program of years past, this year's was simply an event list without the gloss, advertising, or dealer map.

The hall had an amazing selection of board and role playing games, and if you are into card games (particularly "Magic"), you were in luck. There were a reasonable representation of fantasy miniatures and less so of sci-fi,  though the Battlestar Galactica miniatures (Iron Wind booth?) were just outstanding.  There were also some incredible artists selling their work, as well as makers of costumes, clothing, artificial weapons, jewelry, etc.

I had targeted about six venders, that I new had attended the con in previous years, but soon discovered that none had attended this year.  After about 40 minutes of wondering through the hall, I came to the realization that there were was nothing that I was really interested. So, it was off  to miniatures gaming.

As we walked down the concourse, talking over the ambient noise of the role playing and board game halls, I noticed that it was much more quiet as we neared the end hall with miniatures.  In my previous visits, miniatures were in a huge hall never tight for space, and with a vast number of miniatures events spanning the full range of possible periods and genres.

We entered the hall, only to find a long hallway created by temporary partitions that closed off half or more of the hall.  The miniatures area was still a large space, but smaller than in the past, and not terribly busy for noon-ish on the Saturday of a large convention.

After passing a couple of life size Space Marine statues, the first games that we encountered were a couple of Warhammer 40K tables.  One was loaded with GW manufactured ruins, and was quite attractive, another with a rather unique scratch-built set-up.  We then proceeded down the line of 40K games, which featured more unpainted or primered  miniatures than I have seen at all of my prior convention visits combined.  To be honest, I was shocked at the amount of unpainted lead (and plastic and resin).  There were some nice pieces mixed in , and some tables had only painted lead, but at least half of the 40K tables had some unpainted stuff.

Moving on, there was typical mix of games with several featuring very nice layouts and/or with cool features or miniatures. I saw more modern micro-armor than I have seen since the Cold-War was at its peak (did I mention that I like tanks), a couple very nice dungeon crawl layouts,  a "My Pretty Pony" game that was set-up, but not running ( I have to admit that I'm was curious),  some great pirate ships, etc.  What I didn't see was the show stopper.  Typically there are several really dynamic centerpiece games.  And there were some very nice and some really large games, but nothing that pushed the boundaries.

My expectations are unfair; I know this.  I've been around the hobby a long time, and I've seen a lot of really cool and amazing stuff over the years, and thus, it is harder and harder for gamers to push that limit, to show me new things, amazing art and creations, original ideas, things that inspire me.  Yet, I find them on the internet almost every day, but  for the first time in over 25 years, I came away from a convention, visually uninspired.

After our pass through the miniatures gaming, we spent some time talking, catching up, and eventually made another pass through the miniatures area.  It was at this time that I realized something else was missing, or at least I did not see it.  Where was HMGS-Great Lakes?  I know that for some years, and during my last several visits to Origins, that GL had been involved in promoting and providing historical miniatures at Origins.  In the past, there had sometimes been a large service desk with HMGS volunteers doing things to assist/promote/recruit.  I did not see that this year, though that may have gone away some time ago or been located elsewhere.  I have no idea.

A little more talking, a stop by the auction, and another pass through the dealer hall (with no purchases) concluded my visit to Origins 2014.

Though I didn't quite get what I was looking for out of Origins, I realize that is a function of my own narrow interests and admittedly unrealistic expectations.  In the end,  it was good to visit with old friends, and that still made it a good day.

Posted by irishserb at 5:24 AM No comments: