The world ended with a whimper.  There was no single global event that placed its stamp on the end of the world.  It was more of a drawn out unraveling of social order and structure.  And while no single calamitous event could claim to be the cause, many predictions of the doom-sayers contributed to the collective failing of humanity.

As the world embraced technology, people found that through this technology, they had a voice.  As it turned out, the loudest voices came from those who dissented the most.  Thus, instead of bringing the world together as a global community, technology inadvertently succeeded in cutting the world up into an ever growing number of angry, fearful little islands.

This fragmentation had many negative effects, including that of disrupting productivity and trade, bringing about a global recession.  The recession turned into depression, food and medicine became scarce, global famine and disease started to take a huge toll.  Wars sprouted, governments failed, and nuclear weapons and all sorts of chemical and biological agents fell into the hands of feudal warlords.  Chaos abounded, and many, many people died.

In the span of a generation, the many billions of earth's population were reduced to millions.  To further compound  humanity's problems, the abandoned and ruined remnants of man's enterprises brought about environmental catastrophes and geological anomalies, literally changing the face of the planet.

In the After, society ceased to exist.

But, alone and miserable, a few people somehow survived.  And in time, a few, here and there, came together, and they began to rebuild the world.   Rag-tag bands of scavengers grew into villages, incorporating tools and resources from the Before.  In some places, villages grew into towns and even cities, and rarely, cities united and created loosely governed territories.  And that is the state of world in the After.

Adventure in this world can be found here.
Posted by irishserb at 5:03 AM 6 comments:

I've made some progress on my Sci-fi scout cars and thought I'd share a few pix.  Painting them has not been altogether successful, as I used a couple of paints that I hadn't used before, and had problems with transparency, multiple coats and streaks in the paint. Anyway, here is how they sit at the moment: 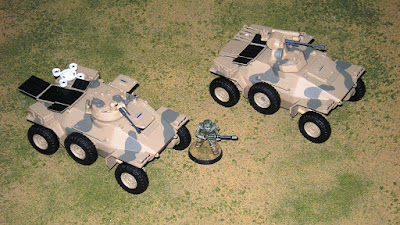 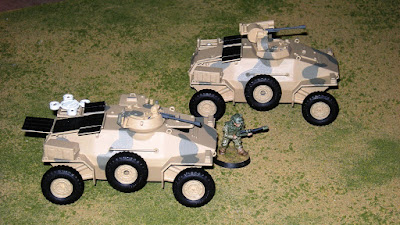 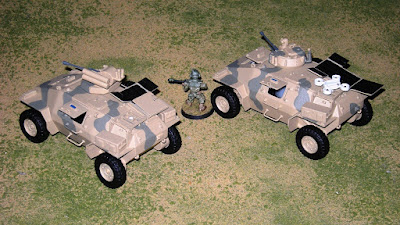 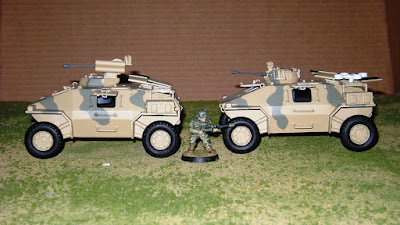 That's an old GW plastic Imperial Guardsman in there for scale.  Hoping to get them weathered and done next weekend.
Posted by irishserb at 5:58 PM 1 comment:

One of my ongoing projects is to bring Star Fleet Battles to my table top in miniature form.  I had been concerned about how to do this, as Amarillo Design Bureau only offers a few models to represent the many different fighters in SFB.

I asked on TMP, who might make a variety of small space fighter miniatures and was directed to GZG or Ground Zero Games, who have an amazing range of model space ships and fighters for the Full Thrust rules system. As it turned out,  I received a nice selection of GZG space fighter models for Christmas, and have painted up a few as a test run for size comparison, basing method etc, and thought that I'd share a couple of pix. These are from pack FT-101B (New Anglian Confederation), and will being used as Klingon fighters in my SFB. 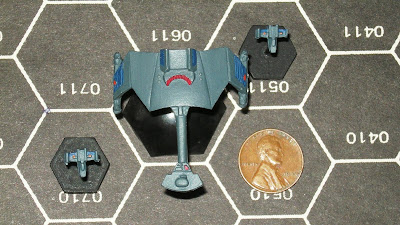 Two Klingon fighters pictured with a US one cent pieces and an ADB
Klingon D-5 War Cruiser (Starline 2400) for size comparison. 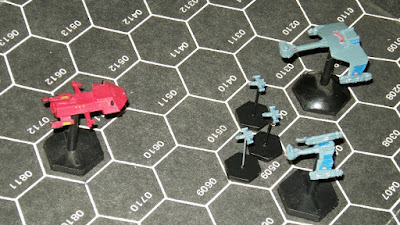 And pictured again, this time with Klingon D5 and F6, and a
Kzinti Medium Cruiser.

My wife (who is not a gamer) instructed me to inform everyone that GZG was wonderful to deal with, and that the service was spectacular, getting the items out and across the Atlantic in just over a week at Christmas time.

I'm pretty happy with the fighters and think that they will work well for my purpose.  I cut the 5/8 inch hex bases from styrene for these, but have since ordered 15mm plastic bases from Minairons (as I don't want to hand cut 200 hex bases), and will get a bunch more of these ready to go once the bases arrive.

Posted by irishserb at 4:44 PM No comments:

When I went searching for my last post about these, I was shocked to find that it was nearly two years old.  I stopped work on these as I needed to either make of find wheels for them, and finally did, but can't believe that they set on my painting table for what turned out to be a 23 month search.

Anyway, as part of my "finish unfinished projects" crusade, I managed to make some headway on these yesterday. When I started, they looked like this: 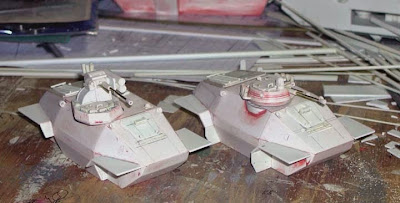 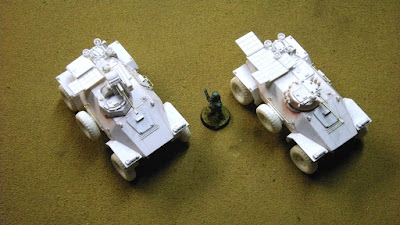 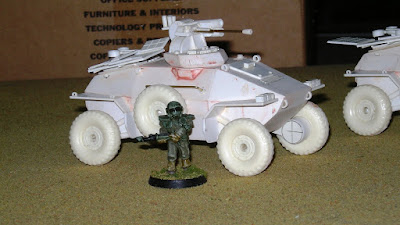 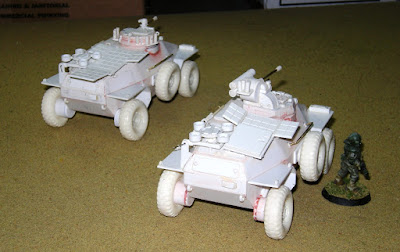 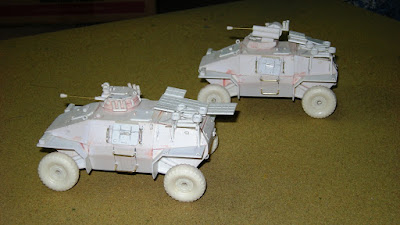 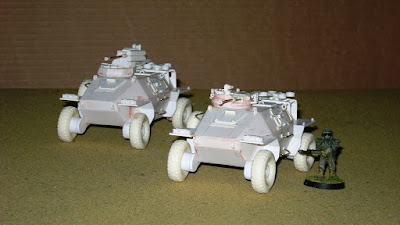 They are two variations of the same basic vehicle.  A light armored car used by a regional military in my post apocalyptic world.  The idea is that they are recycled, pre-apocalypse gas guzzlers, rebuilt as electric exploration/mapping and recce vehicles, with various added gizmos for their new role.  That's an old GW Imperial Guard fig (circa 1989) in there for some sense of scale/size.

There are some other bits and some baggage that will be added during or after painting.  With any luck, I've have some shots of the table-ready vehicles to share in the next couple of weeks.
Posted by irishserb at 8:52 AM 1 comment:

2016 ended up being a year of almosts.  A few projects were almost completely ignored, WWII East Front, France 1940, and 20mm Vietnam.  Others received more attention in the form of planning, miniatures acquisitions/painting, and rules writing that almost brought them to the table;  Star Fleet Battles, Cold War, Post Apocalypse, and Near Future.  And one almost went according to plan;  Modern Africa.

Particularly in the second half of the year, I made some headway, playing seven games in a six week span, getting a set of modern air combat rules onto the table, and getting a full scale war launched in my modern African campaign.

A near future project that I've envisioned for decades, gained momentum in the form of planning, rules and figure acquisitions.  Its close proximity and interwoven nature with my Post Apocalypse world means that both often get a boost from work on either.  My PA game is so close to happening that I can feel the oppressive heat of the wasteland sun stealing my breath.


In 2017 I am going to try to focus a little more narrowly than in the past year.  I had targeted eight projects over the past year, but only made any real progress on five of them.  I figure that those are the five nearest and dearest to my gaming heart for now, and will focus on them in the new year:

15mm Modern Africa Imagi-nations
I plan to fight more of the battles between Mugabia and Uwanda.  In just the opening battles of the broader conflict, each side has realized an significant oversight that may heavily impact the progress and direction of the conflict.  And, with the manifestations of the oversights, the likelihood of outside intervention grows, on land and in the air.

28mm Post Apocalypse
I have rules, story-lines,  characters, and figures for 22 factions in my post-apoc world.  I only have to get some terrain and other bits finished (and make a place to store it), before the adventure can begin.  My game will be launched in the coming year.  I hope to share it on my blog, as a series a stories told from the vantage point of various characters in the game.

28mm Near Future
This is a less ambitious project than my PA world, but involves a number of factions for light-hearted adventures in a near future setting.  Set in and around a southwestern Hollywood town, adventures will range from squabbles between locals and out-of-towners to espionage to zombies to alien invasions. The plan is to finish building the game in 2017 for presentation as a convention game early in 2018.

6mm and 15mm Cold War
I am a child of the Cold War, and have been fascinated with the hypotheticals since the early 1970s.  The goal this year will be to field armies of 4-5 nations circa 1982 on completed battlefields by the end of the year.

Star Fleet Battles
A fan of the boxed rules and three expansions from the early 1980s (pre-Captain's Additions), over the last year, I have been working to get this onto the table in miniature in a way that I have envisioned since about 1982.  An old friend and I are chasing this, and will be experimenting with adaptations to the rules to better accommodate the SFB rules with miniatures later in the year.


So these are the main goals, probably as unrealistic and unattainable as always, but it never hurts to dream.  Other projects may creep in as the mood strikes me, as Victorian Piracy and adventure, the jungles of Vietnam, and battles of 1940 and the Eastern Front are never far from my heart.

Posted by irishserb at 7:40 PM No comments: