Early this month, I got part of a day free and hurriedly painted a second Mugabian infantry company.  All of the infantry are Peter Pig figs from the AK47 range or Range 17.  The Sagger ATGM and crews from the support section are from QRF.  I finally got the bases labeled (underside) and am ready to box them, so thought I'd take a couple of pix. 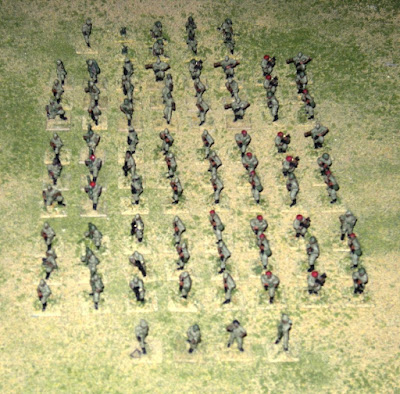 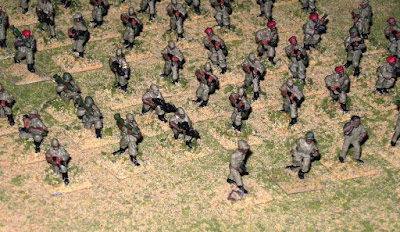 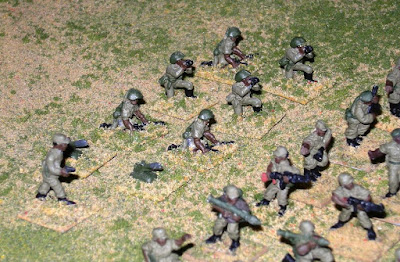 Extremely basic paintjobs, but at least I can get them on the table.
Posted by irishserb at 7:32 AM 1 comment:

Well, I've tinkered a little more with the air combat rules, making some changes before my first game. The scale went to 1/2940, though turn length is staying at 5 seconds for now.  I think I have decent mechanics for working out basic maneuvers such as wingovers,  chandelles, and loops with the stands.  We'll have to see if they give reasonable representations of movement.  The gun tables, shooting, and effects are hammered out, as are basic IR missiles.

I updated the aircraft stand and made a few more with all the required markings for movement and deflection shots, and made turn gauges.

So far, I've only managed to paint the four planes needed  for the next encounter in my African imagi-nations war, a couple of F5s for Uwanda, and two Mig 17s for Mugabia.  I haven't had a chance to make decals in scale yet, and probably won't before trying out the planes and rules.  Right now, I 'm hoping that I have a successful day casting on Saturday, so that I can have Sunday to try the first game with the airplanes. 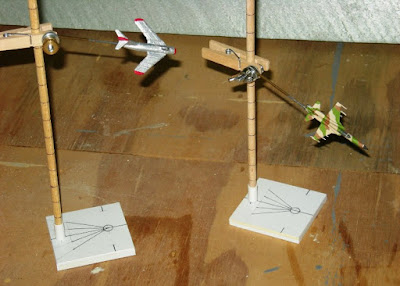 Hopefully, I'll have an AAR in a couple of days.
Posted by irishserb at 7:26 PM 3 comments:

I've continued moving along with my idea for modern air combat rules.  Both before and during the time that I've been working on this, several sets of rules have been suggested to me. Unfortunately, they have either been out of print, or were not as detailed as what I am hoping for.  I am keeping a couple as back-ups in case my effort proves to be futile.

So, I've been re-learning a bit of physics, and doing a fair bit of research, when I can find time.  I have roughed out most of the stats for the aircraft involved in my African imagi-nation campaign.

Basic characteristics of the game are (any of this could change):
Scale:1/2288
Turn: Represents 5 (probably going to change to 6) seconds, and consists of three impulses.  Movement, shooting, and damage is resolved each impulse.  Sighting and speed changes are made at the start of each turn.
Movement Point: Equals 1/2 inch, with the speeds ranging  2-21 movement points per turn so far, with the Mig21F being the fastest jet currently included.

Thus far, the characteristics for each aircraft include the following:

Speed:
Minimum - Under which, you fall out of the sky
Cruise
Maximum -level flight
Terminal - Max dive

Roll Rate- applied per movement point
Turn Rate- applied once per impulse
Acceleration/Deceleration-
Dive and Climb speed gain/loss-
Gun Table- Number of guns x appropriate gun type, number of hits are a function of pounds per second of ammo thrown at the target.
Max Hits- Each aircraft will take a number of hits (ranges from about 30-75) with critical hits being scored on every eighth hit and on each hit beyond maximum (criticals range from losing range, speed, or controls, to pilot dead or plane exploding).
Bursts-
Sighting table-
Ceiling-
Range-
Radar-
Missiles-

Radars will have to detect targets, missiles will have to lock on, successfully fire and then track or be guided to the target.  There will be a period of time required for lock-on, which for some early missiles can span more than a turn.

I'm trying to find mechanics and compromises that minimize calculations for energy loss or gain during the turns.  I  think that I've found a way minimize the number of turn gauges needed for aircraft relative to speed, but will have to experiment with it in 3-D maneuvers.

I've also roughed out a couple of prototype flight stands for working out the mechanics. 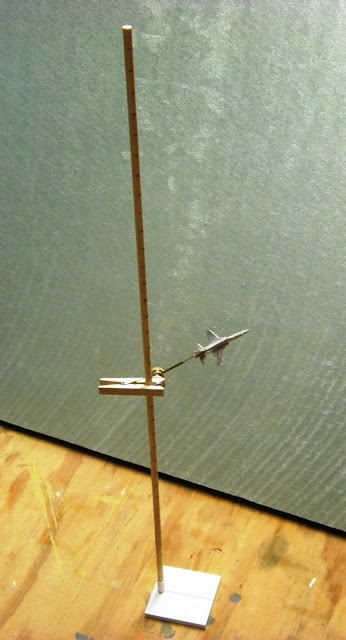 The stand is two feet tall, with a weighted two inch square base 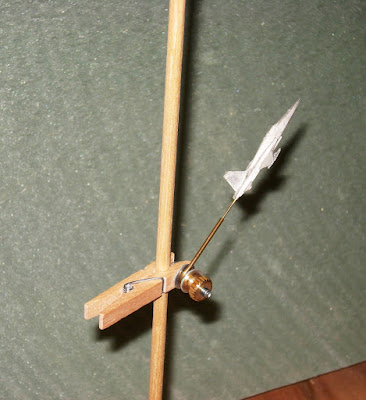 The clip uses a miniature clothespin with brass wire inserted into a jet nozzle.
The clip allows roll and pitch to be depicted.

In early July, I ordered a number of 1/285 and 1/300 airplane models from I-94 Enterprises and Scotia.  Both offered great service, and I am quite happy with the models.  Haven't had a chance to do anything with them, so here they are straight out of the box.

From I-94 Enterprises, I picked up the following from the Raiden line: 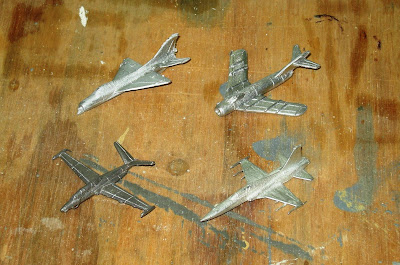 Dave Winfree was fantastic to deal with in getting these, with exceedingly fast service, and great communications.

Scotia provided the following, and despite being across the Atlantic, got the models to me inside of two weeks, with notification of each step in the ordering and shipping process. 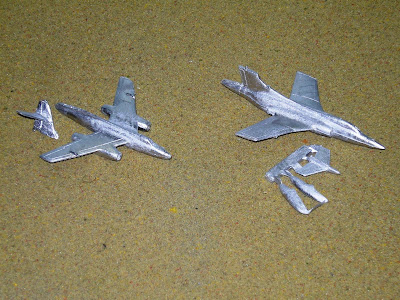 Initially, I was extremely surprised and happy to find that everything jet needed for my games was available, but then found that Skyraider was out of business  They had a G91, and I was going to use an MB339 as a proxy for the Strikemaster.  But now it looks like I will may be getting into the 1/285 model aircraft industry, as I will be scratch building these.

Some years ago (like maybe 12), I tried making some models for the Arab-Israeli wars, as there wasn't much available then, and ended up with these unfinished masters: 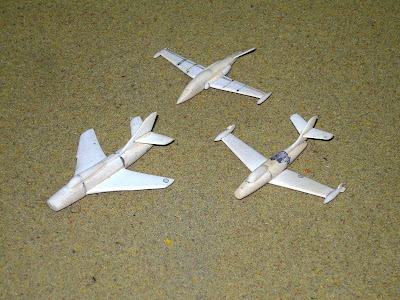 They are Magister (with damaged tail), Super Mystere and Ouragon

Though I never completely detailed them (my adversary for the mid-east wars moved away), the process went very quickly, so I expect that mastering these two won't be a big delay.

The goal is to allow three dimensional dogfighting with jets and short range missiles on a tabletop, where individual aircraft maneuver to take advantage of performance advantages.  Additionally, I hope to also manage beyond visual range engagements if needed (they will be rare in my games).

Hoping to try the first run-through in the next few days. Sorry some of the pix are so crappy, working with yet another camera.
Posted by irishserb at 12:25 PM 3 comments: