Most of my basement is occupied with miniatures, terrain, and endless gaming projects in various states of completion.  Incomplete projects out-number completed ones, and I'm am always in my own way, while trying to work on anything.  Early in the year, I started to make a little headway, discarding things that simply weren't worth the space that took up, selling "abandoned miniatures", and finishing old projects.  But as I got busier with life again, I faded away from the "clean-up".  In recent days though, I have managed to get the jump on some unfinished business.

Back in 1989 or so, I plunged into 15mm WWII gaming via Quality Castings, which sold the old Heritage miniature line.  My first encounter with these figs came nearly a decade earlier, when I was introduced to the Panzertroops rules, but we opted to play with 1/72 scale plastics, as the metal miniatures were more expensive and not readily available to us at the time.

At the time that I got into 15mm WWII, Quality Castings was the only suitable miniature line that I was aware of, and it was readily available.  I was actually pretty happy with them, though some
models were better than others. 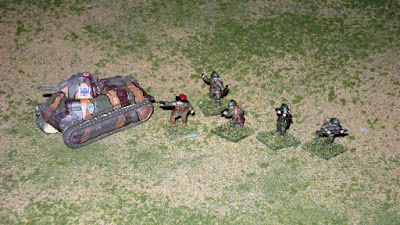 Anyway, shortly after receiving these, I thought that I would clean up their Pz III E to make it a little more accurate.  As I began scaling their model, and considering what was involved, I just decided to make a new master for the model, and thus started the life long endeavor of making my own miniatures. 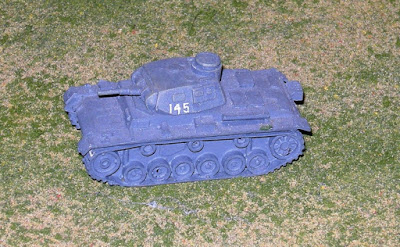 Though it hasn't seen the table in years, this Pz III is a veteran of
hundreds of France 1940 games.  I imagine that it will get a
face-lift before seeing the tabletop again.

Over the next few years, I mastered more than 50 WWII vehicles in 15mm scale, focusing on building a nice collection of 1940 models over that first 18 months or so.  I continued working on mid and late war Germans, late war US, and a few Soviet models as well.

One thing lead to another, with the result being that I never built my own mid and late war armies.  I cast a couple of these and a couple of those, and played the occasional game, but for example, all these years later I have only four Pz IV, two Tiger 1, a couple of Panthers, etc.  There are many models of which I have no castings.  So for all these years, I have carried around boxes of molds with the intent of building my WWII armies. 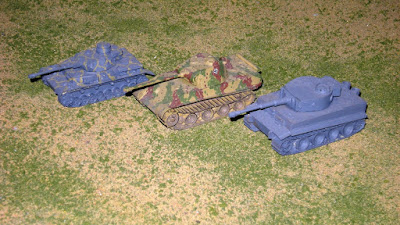 Nearly half of my late war German armor.  Most was cast and
finished with a minimum paint job in a rush for the odd game.


I've reached a point where storage space is at a premium, and those molds take up valuable shelf space, while offering no on-table options, so I recently decided to cast up my armies, trading  miniatures for molds, and in the end, gaining a couple of empty shelves.

With a few days off over the holidays, I've started casting, and am making progress.  I don't know if I will be done by the start of the new year, but it shouldn't be too much longer than that, to complete my casting project. 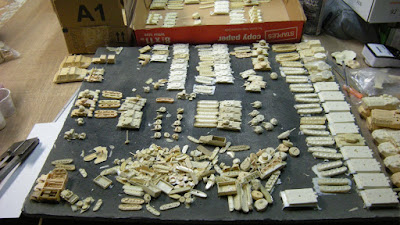 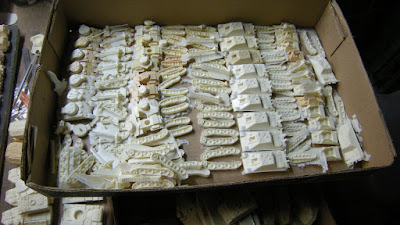 My growing number of parts for armies that should have
been finished decades ago.

Hopefully, it won't take another 27 years to get them assembled and painted.
Posted by irishserb at 8:02 PM 4 comments: