If you are a regular reader here, you probably bumped into my World War III project over the last couple of years.  Currently the campaign is on hold, while I work towards freeing up space in my "book room" to set up the strategic game map and counters, as I am using a version of GDW's The Third World War retooled for 1958.

The plan was to set it up on the table in the room, and cover it with a piece of acrylic sheet to protect it from the three cats, in whose home my wife and I reside.  The hold-up is that the room has become a storage space for much of my daughter's stuff from school, as well as a number of other odds and ends.  And, I haven't been able to make this stash go away, try as I might.

Yesterday, it occurred to me that I've already got the 1958 vintage counter sheets in  digital format, why not just scan in and retool or recreate the other components of the game to meet  my needs for WWIII in 1958.

I set up something similar to this to help keep track of my fleet units and known enemy units in our Star Fleet Battles camapign (on hold due to Covid), but it is just a map with far fewer counters, not a complete game system.

Today, I intend to go over the rules and see what I might need to do to bring this about.  I also need to look at the limitations of my old copy of Photoshop and see how to set up the map and movement.  Currently, I'm thinking that each nation's forces and unit status would consist of a layer over a background map, but have only spent a few minutes thinking about how to set this up, so not sure.

I also need to square away the system that I plan to use to quantify losses in the boardgame to translate into units of miniatures on the tabletop, which in turn may change how some things are managed in the boardgame side of this.  I suspect that by the time I start playing, there might not be much of GDW's original game left.

Posted by irishserb at 4:29 AM No comments:

Over the weekend, I managed to play three games of Missile Threat, mostly just trying to learn to think in game terms.  My previous experience with air combat games involved games that allowed you to manage maneuvering in extreme detail, thinking in exactly the actual relative positioning of aircraft through the maneuvers.  Missile Threat is a little less granular, and learning to think in the more abstract maneuver methodology is quite a transition for me.

Anyway, the first two games were one on one affairs, first between an F-86 and a Mig-15, the second game was between a Mig-19 and the F-101B.  The first pair played out for far longer than the rules allow, and I never actually had a shot in 21 turns.

The second game was much shorter, proving that the AIM-4 Falcons suck.  I fired off all four missiles at too great a range, and the Mig was able to evade them easily.   The F-101B then ran away.

The third game was much more interesting, involving two Mig-19s and two Javelins armed with Firestreak missiles.  Most of the Korean era planes have a very low speed in the game, which makes it easy to fall out of the sky trying to do fancy maneuvers.  The Javelin falls into that low speed envelope, while the Mig-19 is faster, and has a little more energy to play with.

Within the game rules, most of the fighters and interceptors introduced before 1958 have almost exactly the same stats.  The result was that I still can't figure out how to gain an advantage with subsonic jets, though found a little room to dance with the faster Migs.

Here are a few shots of the Javelins having a bad day: 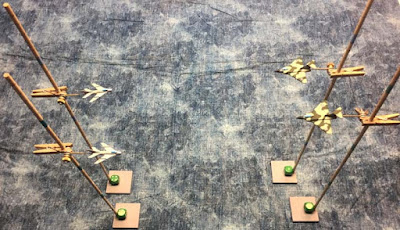 The Mig-19s and Javelins close. 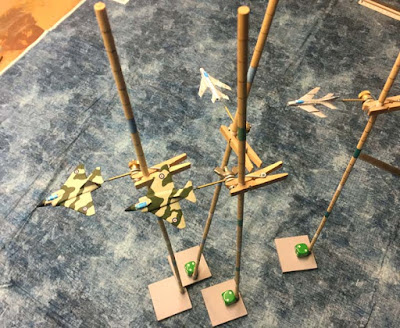 Three or four turns later, I've got a mess, with aircraft never
ending up quite where I expect.  On the next turn a Mig scored
a hit, wounding a Javelin Pilot. 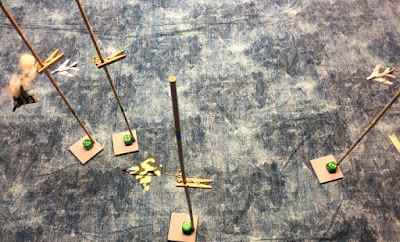 On the next turn a second hit kills the Javelin pilot, with
the jet continuing to dive. 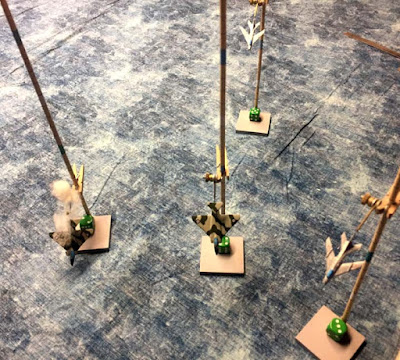 Just before the first Javelin crashes, the second Javelin
is in trouble, everybody is diving. 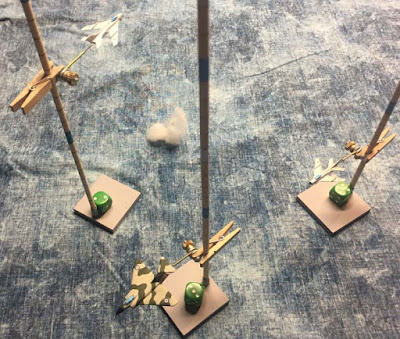 The first Javelin has crashed, the second is at low altitude,
trying to escape. 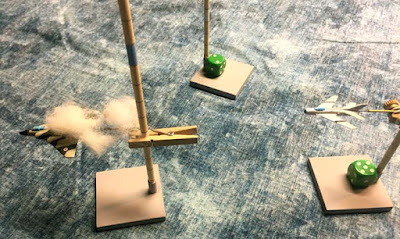 The other Mig gets a hit on the second Javelin, another pilot wound,
but the Javelin gets away, flying off of the edge of the table.
The Migs got three gun hits, all resulting in pilot wounds, the Javelins never got into position to fire  their guns or Firestreak Missiles.
I'm learning, but still need to play more games to learn the rules better.
Posted by irishserb at 5:34 PM 3 comments:

Here's another one of my legacy projects finally getting attention.  In the early 1990s, I bought three packs of Faller HO scale wrought iron fences.  These are packs of beautiful wrought iron fence sections with concrete posts.  The pack yields lengths of six different style fences, each style includes gates, and the sections of fence range from about 2.5 to 3 inches long, or about 8.5 to 10 inches of each style fence without the gates.  I used a few sections on projects in years past, but had always intended to create some free standing fence sections for use with 15mm France 1940 and other WWII games.

The fence sections were mounted on 5/8 inch wide .04 inch thick styrene strips cut to the length of the fence sections.  The ends of the strips were trimmed back at 45 degree angles to allow the sections to be set up to create up to 90 degree corners.  For now I only used two patterns of the fence, some of which had already been used, so I ended up with about 5 sections of one style and about 10 sections of the other.

For each style, one section was made with the full concrete post "frame", with posts at both ends.  The other sections had the right post removed, such that there would not be double posts when the fence sections are set up.  I also made a knocked down section for when those pesky tanks run through the fence.

Here are a few pics:

Above are views of all of the fence pieces mounted on the styrene bases.
The lower photo more clearly shows how my reference to
the fence post arrangement in the text.

There is enough fence to do maybe 4-5 frontages along a street.  I'm not sure if I'll make more free-standing fence sections, just just use the remainder of fence on set-piece buildings.
Posted by irishserb at 5:37 PM 1 comment:

It seems like Christmas was yesterday,and here we are two months gone in 2021.

I completed more hobby projects in 2020, than any year since I started keeping track (2003 I think).  And, I've equaled that in the first two months of 2021.  A bunch of it was research related, and involved completing rules and/or charts and tables for vehicles and equipment, rather than painting and building, but either way, they are projects now marked off the list.

My 6mm Cold War Hot game, set in 1958, is ready to go, as soon as I can clear out the space to set up the permanent map board.  A project seemingly as complex as creating the game, and that will result in my having an extra storage room in the basement.  I'm continuing to add a few miniatures and other bits for this, but I'm ready to bask in the atomic glow of WWIII. 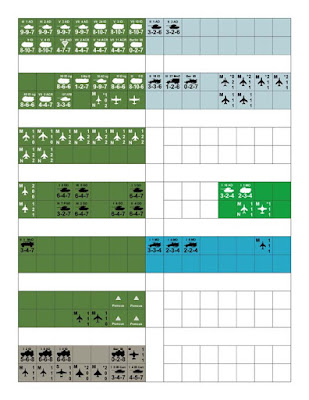 Nato strategic map counter sheet for my 1958 version of  WWIII.

I've also started making progress on the hundreds of 15mm WWII tanks and vehicles that I cast up years ago, as Panzer IVs, Jagdpanthers, and Tiger Is are rolling off of the assembly line.   The next batch of 15mm vehicles will likely be a bunch of French stuff for 1940.  It is hard to believe that I made the masters for these in the early 1990s, and it has taken thirty years to get to painting the miniatures. 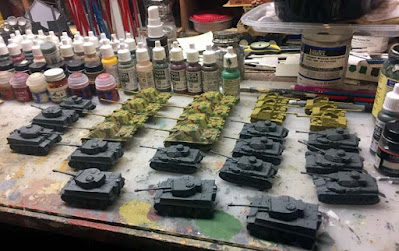 Another big project that is starting to roll along, is the topographical terrain for the Battle of Stonne. I've got numerous topo maps, and quite a number of other references,  and should be able to produce a really nice table for this.  The foam tiles are cut, filling a few large boxes at the moment, and if all goes well, it may be the first of several 6mm battlefields that I produce. 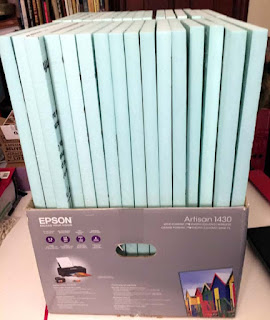 I've also been making progress on a few 28mm post apoc factions and various bits associated with them, and other projects have been moving along, such as hedgerows, fencing, and bushes for various 15mm games.

In any event, as February 2021 fades into the past, it just occurred to me how fast the time has gone by, and just how much progress I've made on the hobby front this year.