My blog has been silent for a couple of weeks, but my game table has been trembling with the rumble of tanks and artillery as the Soviet 10th Tank Division slams into the UK 6th Armored.   Thus far it has been amazing, and I'm not anywhere near the meat of the battle yet.

Here's a peek of the table at the moment: 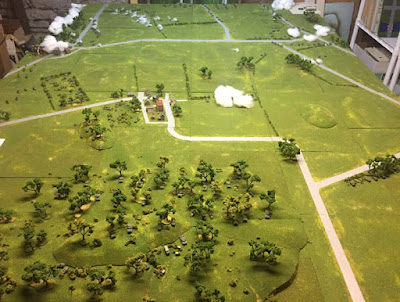 The Soviets entered from the far end, with British armor and infantry spread across wood and towns and tree lines.  It starts late morning with low overcast and a misty light rain.  Visibility is poor, aircraft are largely useless, and thus far artillery has been king.

A British armored squadron with infantry support was in the forest along the left edge of the table in the distance, and after being spotted, was chased out of the woods by 300 rounds of white phosphorus from six batteries of artillery (the Soviets have a lot of artillery).

The Soviet advancing T-55 battalion advanced through Soviet smoke into battle at around 800 meters, and it was ugly.  The battle has had two opportunities for flanking actions, but both were stifled by morale and command and control problems.

The Centurions have stood up well against the T-55s, better than I expected.  And the Conquerors, though few, have been devastating.

A T-10 battalion is coming down the road center in the distance, with a platoon breaking off to deal with the remaining British armor, who's morale has been pretty firm thus far.  The HQ of the badly ravaged T-55 battalion has lost control, as all of the CHQs have been destroyed, and the remaining tanks have taken up a defensive position for the time being.  Another T-55 battalion is coming down the road on the right in the distance.

The British forces have two more squadrons of tanks in the town center and the hill behind, with two companies of infantry supporting, so most of the fighting has yet to come.  I suspect that before this table is done, that there will be four rather involved sub-battles.

I'll be fighting it out over the next 4-5 days, and will post a full AAR early next week.