Over the last week, I managed to complete a little post-apoc project, some chain link fence for 28mm.  Scale is a little wonky, as I made them to "look right" with figures mounted on slotta bases.

I originally was hoping to leave one end post off of each section, such that the end of the cross-member would simply overlap the end vertical post of the next section, resulting in a more realistic model, but the wire mesh persisted in having a little twist to it, bending the cross-member a little, and ending with the mesh at a little of an angle.  So, each joint between sections has a double post.  I briefly considered soldering the posts out of brass rod/wire, but didn't want to take the time.

I ended up with twelve 6" sections and ten 3" sections for 102" of fence.  There are a number of damaged section, ranging from a bent post, or cut in the fence to complete bent over as if run over by a large angry post-apoc truck.

Here is the result: 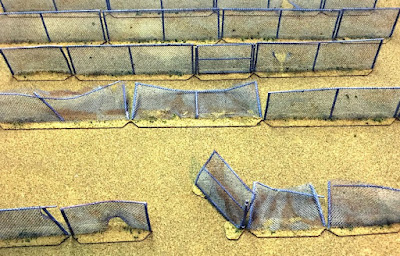 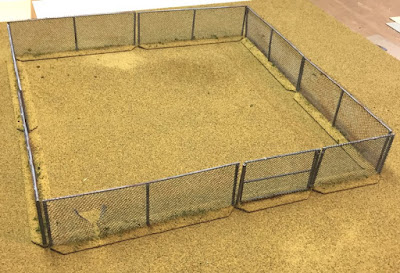 The last pic is with a couple of 28mm figs, for a sense of scale.  I believe the biker is from Copplestone, and the tall guy is from Foundry Street Violence.

I'm a little bummed about having to have the double end posts, but otherwise happy with the result.

Next up is an abandoned roadside diner and small motel to go with the gas station that I built last year.
Posted by irishserb at 4:21 PM 4 comments:

The Battle for Objective B22  was an afterthought at best (and a surprise to me, as I didn't expect it to take place), for the Mugabian command.  Uwandan forces were already behind it, so it would fall now, or fall later, it didn't matter. 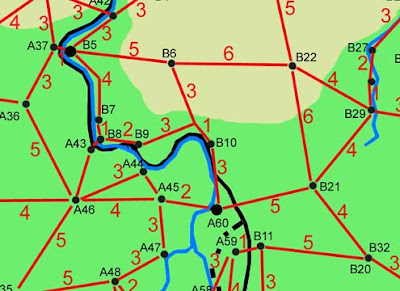 Objective B22 is in the upper left above. 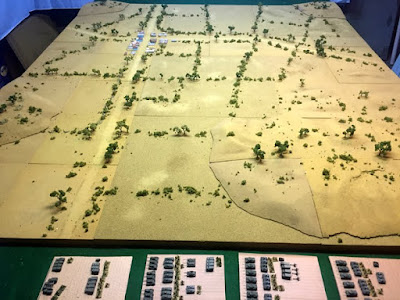 Captain Hofu knew that he could not hold the town, he couldn't even pretend to defend its perimeter.  He had a company of infantry, and he needed a reinforced battalion to cover that much ground.  Instead he decided to defend a small hill just northwest of the town, figuring the rise would allow him some advantage over the invaders, at least for a little while.  As he waited for the inevitable, he hoped that he could order a withdrawal, minimizing losses, after inflicting as much damage as possible.

Mugabian forces consisted of remnants of two forces previously beaten in battle, and the garrison the town at B22.

Uwanda attacked with two task groups with some experience and few losses.  Each force featured a company of infantry and two platoons of Centurion IIIs.

Mugabian forces set up on and around the hill northwest of the town.  Infantry and some T34/85s spread out around the perimeter of the base of the hill, while the SU100s and a platoon of T34/85 were placed on the hill.  A couple of scouts were lace forward of the position to watch the east/west road into town. 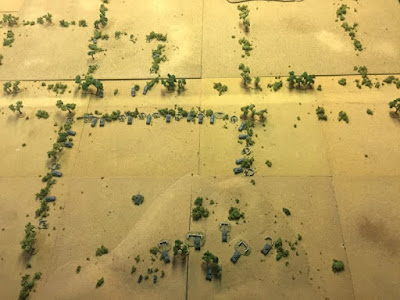 Mugabian forces deployed around the hill,
the scouts are little out of the view to the upper left.

Uwandan forces decided to advance on the town from the north, moving east into position, gaining cover from a hill to the northwest of the town.  The Saladins advanced across the the top of the rise, trying to locate the defenders in, and around the town.

The Mugabian scouts watching the east/west road were in perfect position to see the Saldins advancing along their north horizon  first, so Mugabian forces kept eyes open, waiting until the Uwandans closed within effective range.

The Saldadins advanced, eventually creeping into range, with one getting picked off by a SU100.  With contact made, slowly, the Uwandan Centurions of TF8 made their way along the north side of the slope, eventually  moving into firing positions on the east face of the hill, overlooking much of the Mugabian positions. 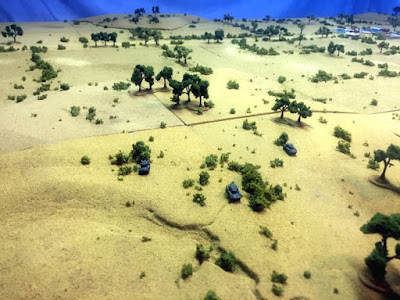 Saladins advance on the hill northwest of the town.

At a range of 1400-1600 meters, the Centurions located and began engaging the Mugabian forces in front of their hill fortress.  The SU100s responded, with most shots from both sides missing.  During this extended exchange of relatively long range shots, Uwandan infantry continued their westerly advance to the north of the Centurions.

Centurions fire at Mugabian forces in the distance.

As this situation developed, the Uwandan commander decided to send TF7s intantry company into the town via the main east/west road.  These were quickly spotted, with mortar firing being called in on the Uwandan advance. 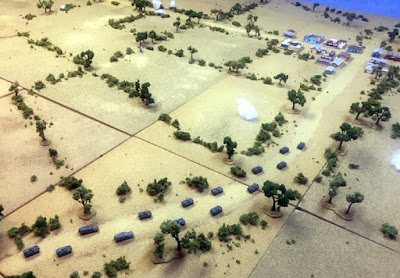 Infantry of TF 7 advance on the eas/west road towards town.

The mortars fired ineffectively for quite some time, finally scoring a couple of hits on Saracen APCs, and forcing a portion of the inf to continue their advance cross country and at a much slower speed.  The forward portion of the Uwandan infantry decided to push forward into town and see what could be found. 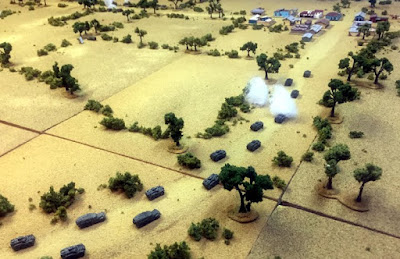 To the north, the TF 8,s infantry closed in on the north south road, north of town, and the forward Mugabian infantry positions, all the time, under the cover of two platoons of Centurions slowly picking apart the Mugabian defenses. 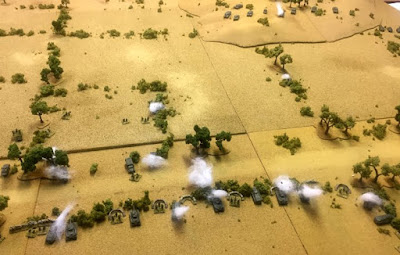 By the time the Mugabians switched to firing smoke in front of the Centurions, it was too late, the Mugabian infantry facing the Uwandans had reached their breaking point, and began to withdraw from their line.  The Mugabain commander managed to keep the flanks in position for a little longer, but the battle was obviously lost. 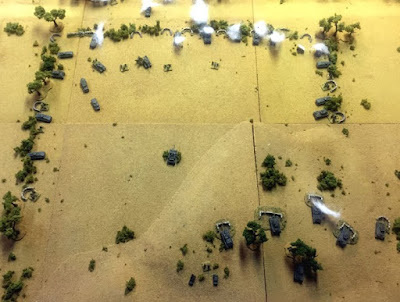 Meanwhile, to the south, TF7's forward infantry advanced through the town, and began to sweeping north behind the town, and toward the Mugabian occupied hill, when they noticed the Mugabian
mortars deployed immediately to their right.  Quickly the Uwandan infantry attacked the mortars destroying, and capturing the entire force. 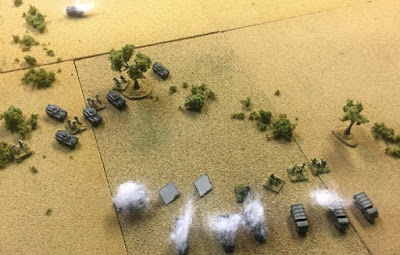 By the time one of the SU100s was lost to one of the Centurions, the Mugabian commander had ordered his force to withdraw, hoping to save most of his men.  Unfortunately, Uwandan
air support arrived just in time to find the mostly exposed Mugabians making themselves choice targets. The first pair of Strikemasters dropped bombs destroying several vehicles and squads, including the onlyMugabian air defense, a ZSU57/2, which never got off a shot. 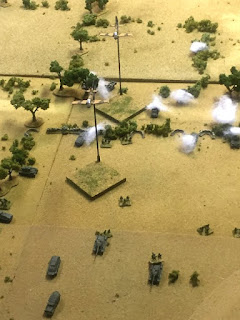 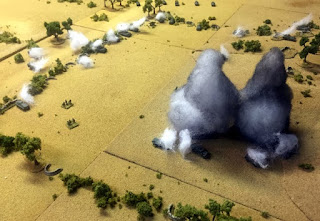 As the bombing occurred, Uwandan infantry closed on both flanks, with Mugabians taking more casualties and eventually surrendering to the Uwandans overrunning them. 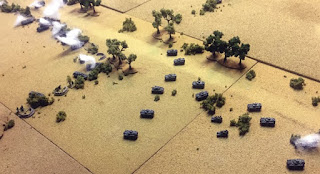 Just before the Mugabian right flank collapses and surrenders.

The battle had ended, the loss far worse than he had feared, his force was utterly destroyed, most of his men now POWs.  "I would do better to surrender, but then all of my men would become prisoners.  Instead, I shall take them hme, such that they shall live, and I will die for my effort."

While I expected Uwanda to win the battle, I didn't expect a total calamity. If Uwandan forces had been equipped with Sherman Fireflys, instead of Centurion IIIs, the fireflys would have had to close with the Mugabians, allowing Mugabia to bring their firepower to greater use. I can't help but believe this would have been a very different, much less lopsided battle.

This was the last battle of the day, as both sides took a little time for regrouping.  I need to roll some dice, as the strategic situation develops a bit more.