Resurrection of My Painting Table

Didn't do much gaming related this weekend, but did have a bit of a resurrection of my painting table.  It has been lying dormant since my Christmas debacle ten months ago, and today I plugged it in, and, it still runs.  Didn't really paint anything yet, but took a little time to assemble and prime 13 or 14 vehicles today.  Now I have just enough space to start painting in the next few days. 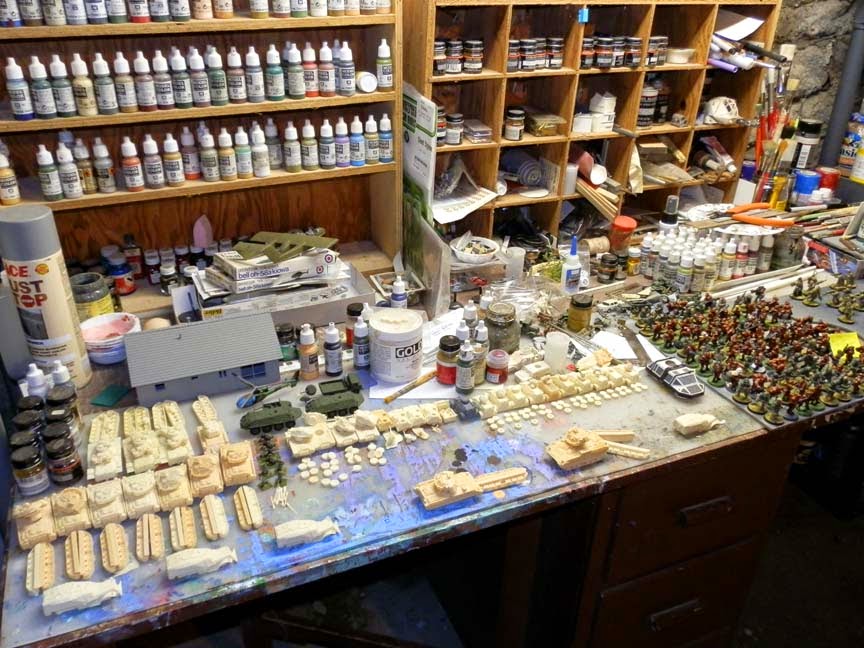 Quite a menagerie; 15mm Bradleys, M60A2s, various Panhard armored cars and APCs, a few BTR152s, some QRF BTR60s, Eureka modern Russians, a 28mm ranch style house, a 1/72 OV-10 that needs decals, two 1/100 OH58s waiting to be built under the OV-10, a couple masters for casting in the middle (M-ATV and Gaz TIGR), a few SFB (Kzinti, Lyran, and Klingon) ships in that pile in the center along with some 15mm civilian cars, a 28mm sci-fi police hover car waiting for "Police" decals, old Imperial Guard waiting to be stripped and repainted on the tray to the right, some space maroons needing some work just beyond the IG, and quite a number of other things covered with so much dust that I don't recognize them yet.

Lets see if I can finish one of them this year.
Posted by irishserb at 5:57 PM 4 comments:

AAR14: Convoy Duty (A Battle in the Fictional Nations of Uwanda)

This battle, another convoy ambush,  is a follow-on to the last battle.  It incorporated lessons learned by both sides, and yielded an even more lopsided result.  This was due to dozens (literally) of missed sighting rolls, and then an amazing string of rolls, mostly under 10% on D100, in the first turn of fire.
_____

This battle took place on the road approaching Objective A58 from the west (near the center of the map).  It involved an Uwanda infantry platoon in Saracens, a few trucks, a couple of jeeps with machineguns, a single Saladin, and a M42 Duster for fire support, should anything go wrong. 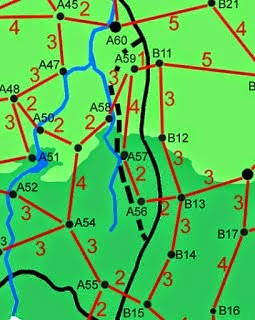 The ULF ambush included only 16 fighters, but with every RPG that the local group could muster, eight in all. 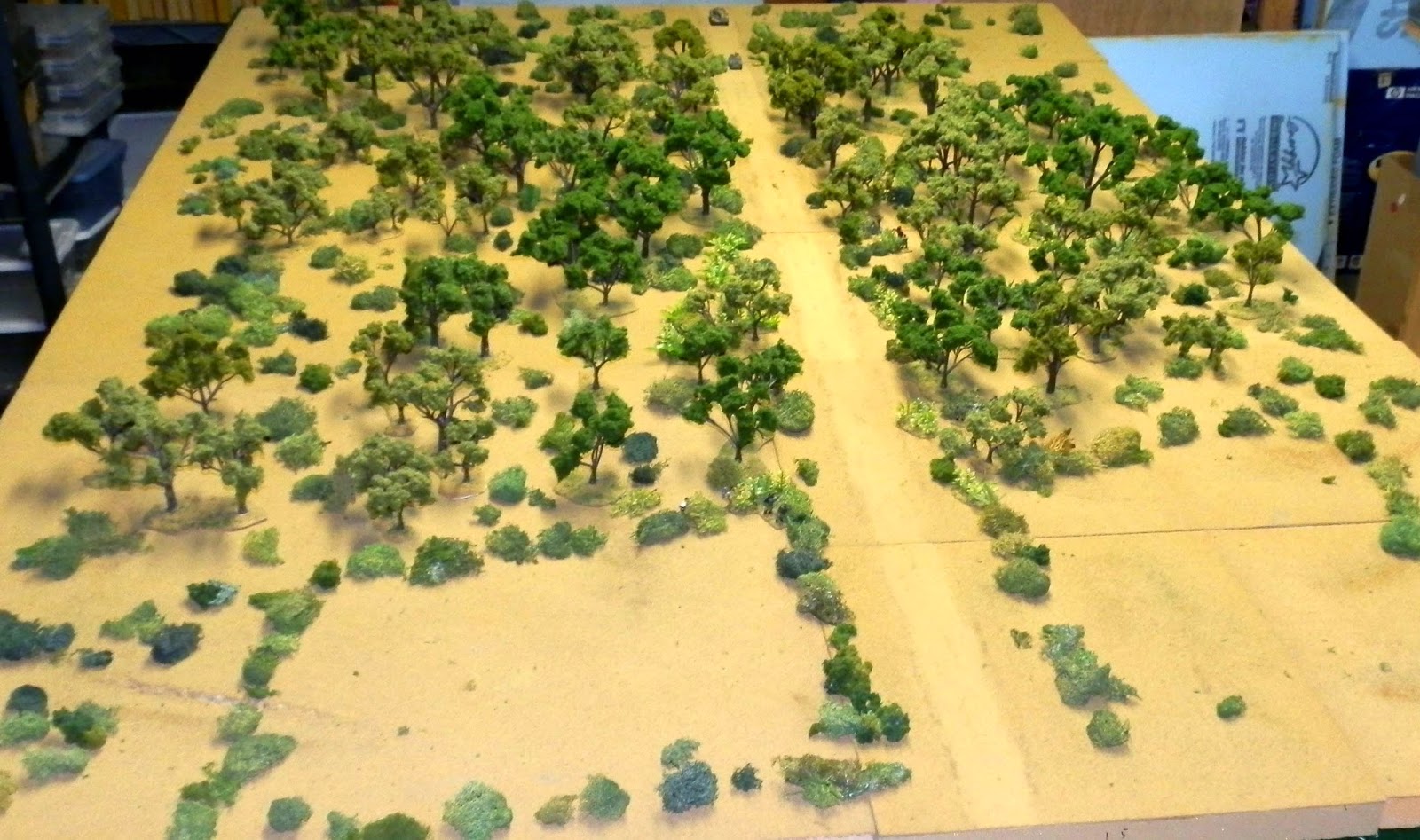 An easterly view of the table.  Uwandan vehicles have
entered on the road at the far end of the table

The convoy was traveling through a small forested section of road, blind as can be, when half of the convoy  blew up due to the multitude of RPGs flying across the road (the lead jeep had actually exited my table, before sighting occurred). 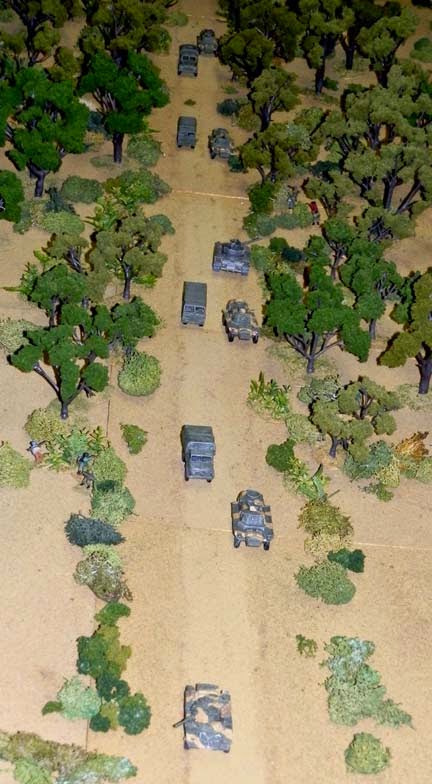 Enemy sighted, M42 turret swinging in the direction
of the enemy, a man in a red shirt fires his RPG.

Tendaji, a ULF fighter, thought, "My body shakes as much from the rumble of enemy trucks and armored cars, as it does from fear.  It is hard to be patient with so many of the enemy, so close.  What, what are they doing...." 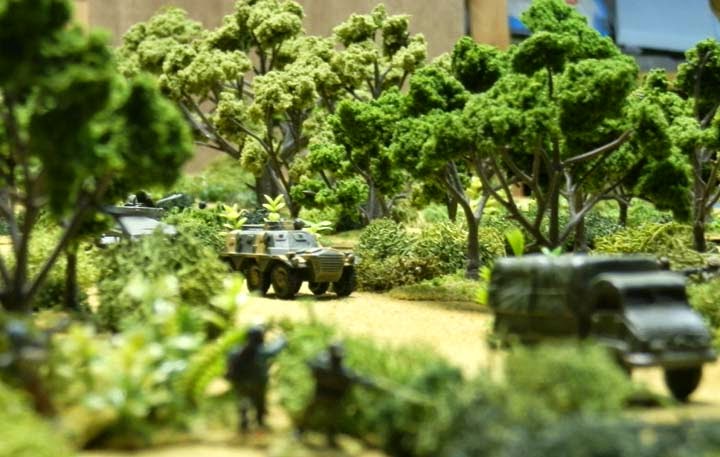 The M42 can be seen peeking through the trees,
just behind the Saracen APC.

The commander of the M42 was the first to see the men in the bushes, radioing the info and slewing the turret around immediately.  But, he would never get to fire, as a startled ULF fighter let loose his RPG for a hit on the M42.  In a second, seven more RPGs flew, and amazingly, all would find their targets.

The convoy simply blew up. All four Saracens, the M42 and a couple of trucks. Gone.  Immediately the ambushers began to withdraw.  Uwandan troops abandoning their bullet collectors, fired wildly into the underbrush. 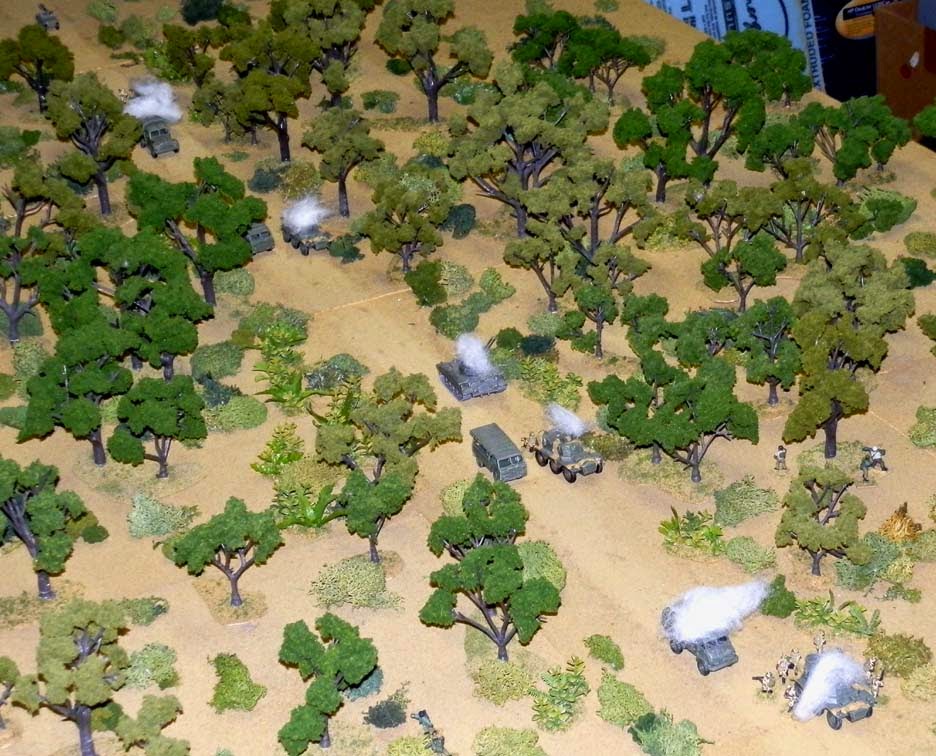 Damage done, the ULF already retreating into the forest.

The Saladin at the front and the trail jeep both saw a few men running in the forest and engaged, killing three.  The battle was over.  The Southern ULF commander's hit and run tactic working better than anyone (especially me) had imagined.


Losses for Uwanda were terrible, while the ULF lost little:


The implications of this lop-sided fight are significant.  The ULF will be able to cripple Uwanda in a matter of weeks at this rate.  Convoy tactics will change, as will the effort to find ULF basecamps.  Up to now, the ULF had been an annoyance, now they were a greater threat than Mugabia.

In Uwanda, the chief of staff reviewed the recommendations for dealing with the ULF.  It would be expensive and brutal.  He entered the President's office with a sense of fatigue and a large frown...
Posted by irishserb at 2:03 PM No comments:

AAR13: The ULF Stabs the Beast ( A 15mm Battle in an African Imagi-nation)

Though ULF activity had increased in recent weeks, the Mugabian military had been silent, as had its leadership.  Uwanda took this opportunity to strengthen its forces along the border, and to prepare to re-take lost territory.

The ULF had been monitoring this activity, particularly the number of convoys moving troops and supplies toward the border.  ULF leadership decided that disrupting the convoys would be the best way to interfere with the Uwandan build-up.

The first of these attacks was located just west of Objective A55 (toward the bottom center of the map), where a Uwandan infantry platoon was ambushed by a large ULF force, while moving toward the border town. 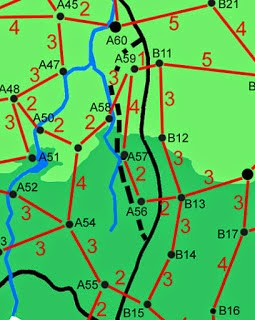 Wakili had run a couple of small operations since taking control of the local ULF, but they had been harassment against local, unsympathetic civilians, loyal to the Uwanda central government.  Today would be different. Today he would attack enemy soldiers.  Today he would make the oppressors pay!

ULF forces deployed along side the road with carefully defined fields of fire.  The plan was simple; force the convoy to stop, kill the soldiers, destroy everything that couldn't be carried away. 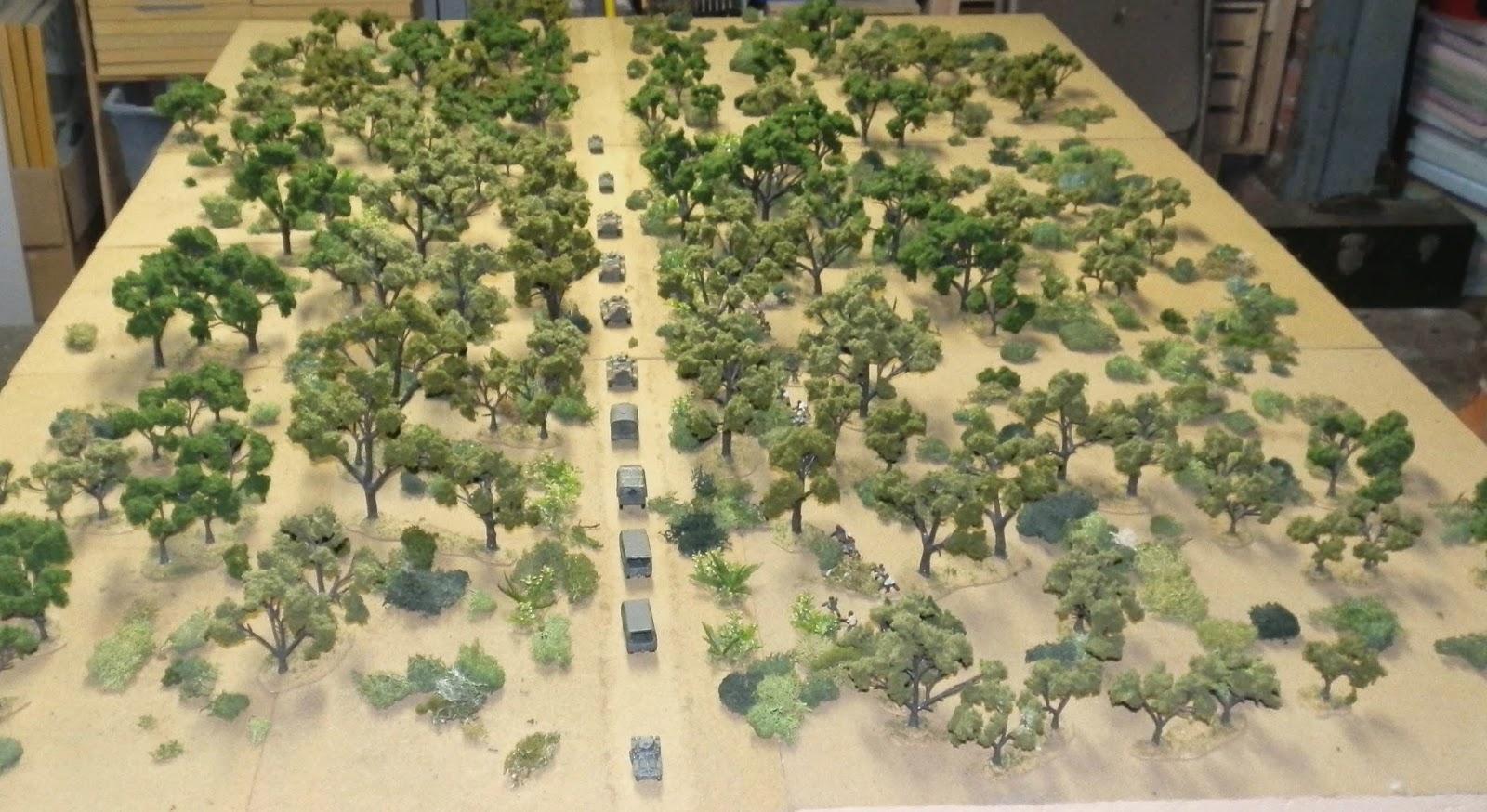 An easterly view of the convoy heading toward Objective A55.

The Uwanda convoy consisted mainly of an infantry unit, heading to Objective A55 to relieve infantry that had been stationed there since the fighting had begun. It was escorted by a few armored cars, and also included some cargo trucks. 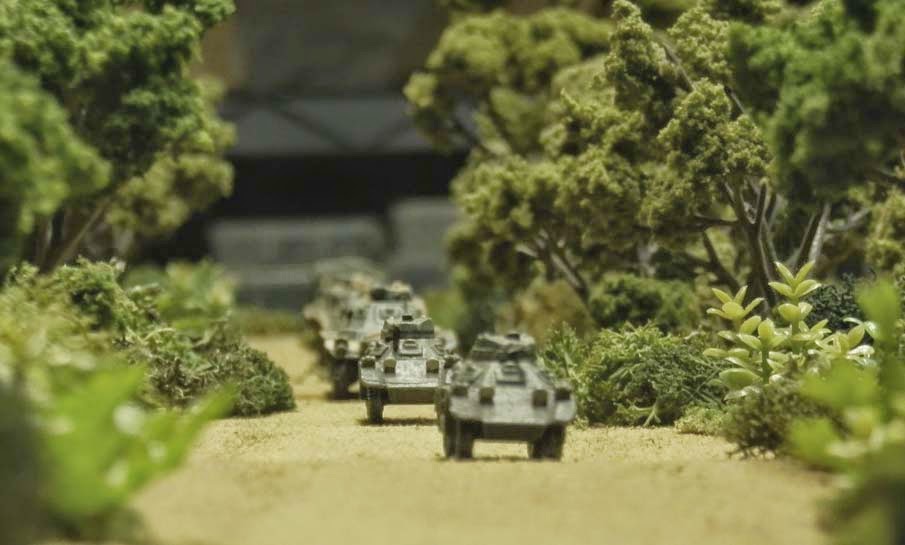 The head of the column with two Ferrets,
followed by Lt. Zuberi's Saracen APC.

Lt. Zuberi was riding in the turret of his Saracen, behind two armored cars leading the convoy.  It wasn't very comfortable, but at least he wasn't stuck in the oven that was the interior of the APC.  His eyes were closed, but he wasn't asleep when the explosions startled him...

The ULF deployed primarily on the south side of the road to Objective A55, hitting the convoy with four RPGs in the opening seconds of the ambush.  Those first seconds were absolute chaos, as the Uwandan troops tried to figure out what was happening and what to do. 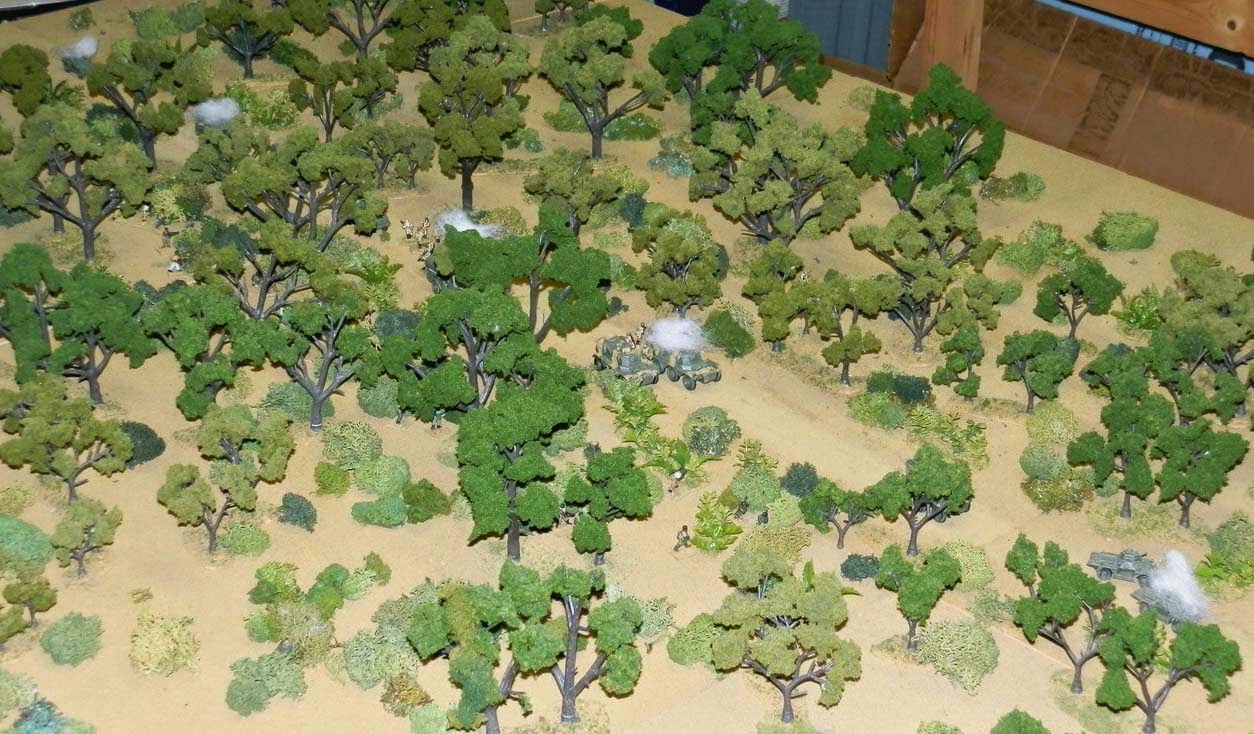 Actually, a photo on the second turn of fighting, showing a 5th
plume of smoke from yet another RPG victim.
The lead and trailing Ferret armored cars were destroyed immediately, as were two Saracens, a large number of infantry were also injured or killed.  The second Ferret in the convoy immediately attacked the point to the north from which an RPG had been launched at the lead Ferret, the gunners in the Saracens searched for targets, firing into the bush.

Survivors bailed out of the burning Saracens, getting cut down quickly, while trying to get into cover and return fire.  More RPGs flew, blowing up the fuel tanker in the middle of the convoy.  AK and machinegun fire raked the cabs of the other trucks, bringing them to an abrupt halt. 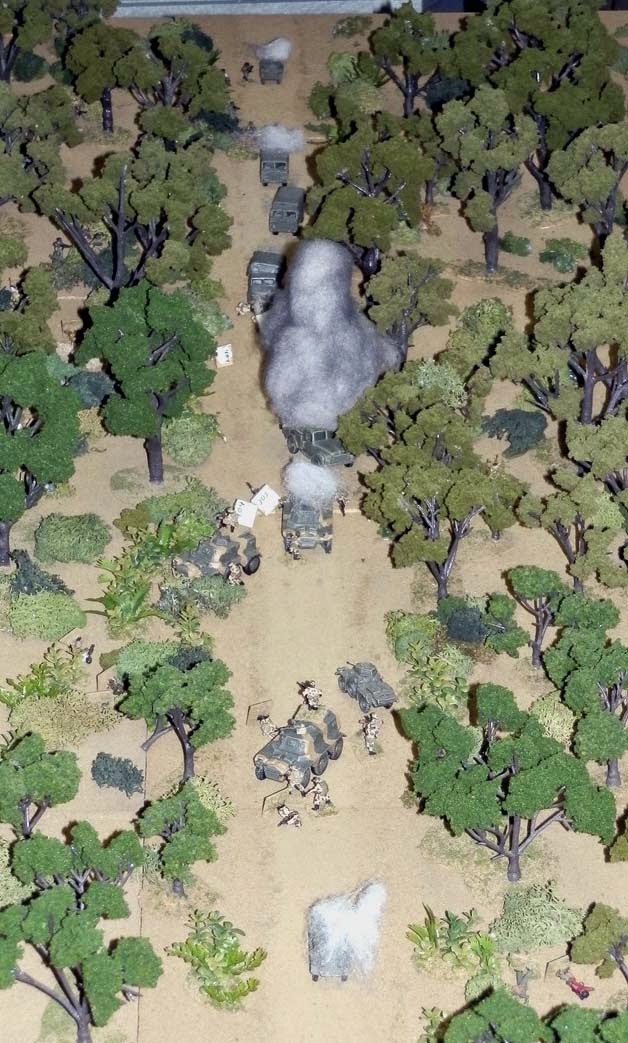 A large plume of smoke rising from the destroyed
fuel truck as fighting continues.

Infantry from the remaining Saracens began to return fire, and quickly cut down many of the ULF fighters near the front of the convoy.  They tried to provide covering fire for the men from the stricken Saracens, but without much success, given the chaos and congestion of the situation. 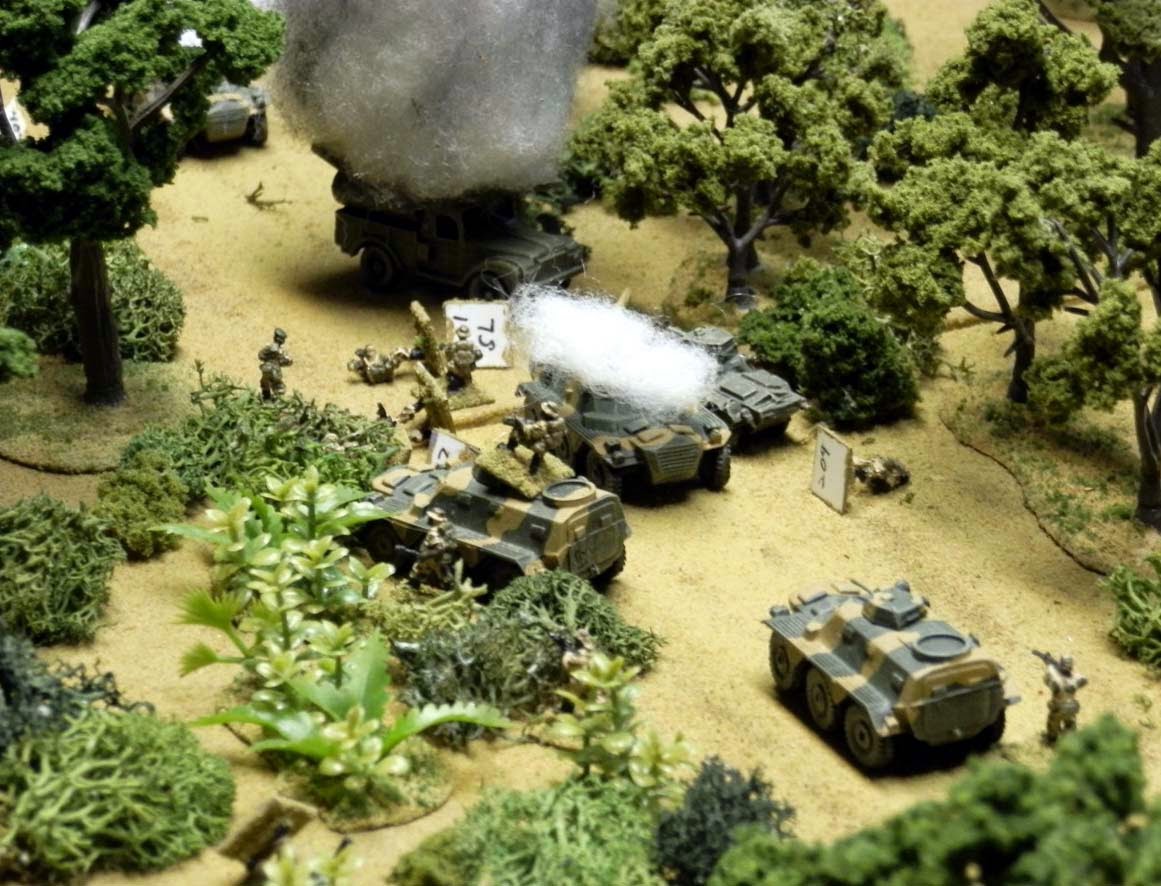 Troops at the head of the column trying to help those toward the rear.

As the ULF took casualties, their morale quickly crumbled, and fighters began to run back into the forest, rather than push the attack on the convoy.  The Uwandan LT did well, manning a machinegun, and regrouping his men to successfully fight off the attack. 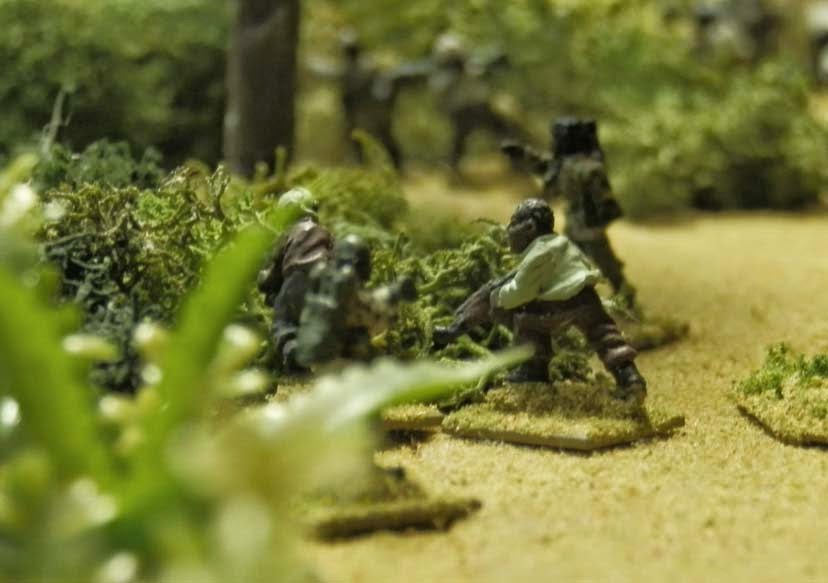 ULF fighters beginning to waver,
as the Uwandans stand their ground.

As abruptly as it began, the fight was over.  Wounded were tended to, but not quickly enough for some.  Half of the vehicles burned, two thirds of the men were wounded or dead.  A few wounded ULF were captured. 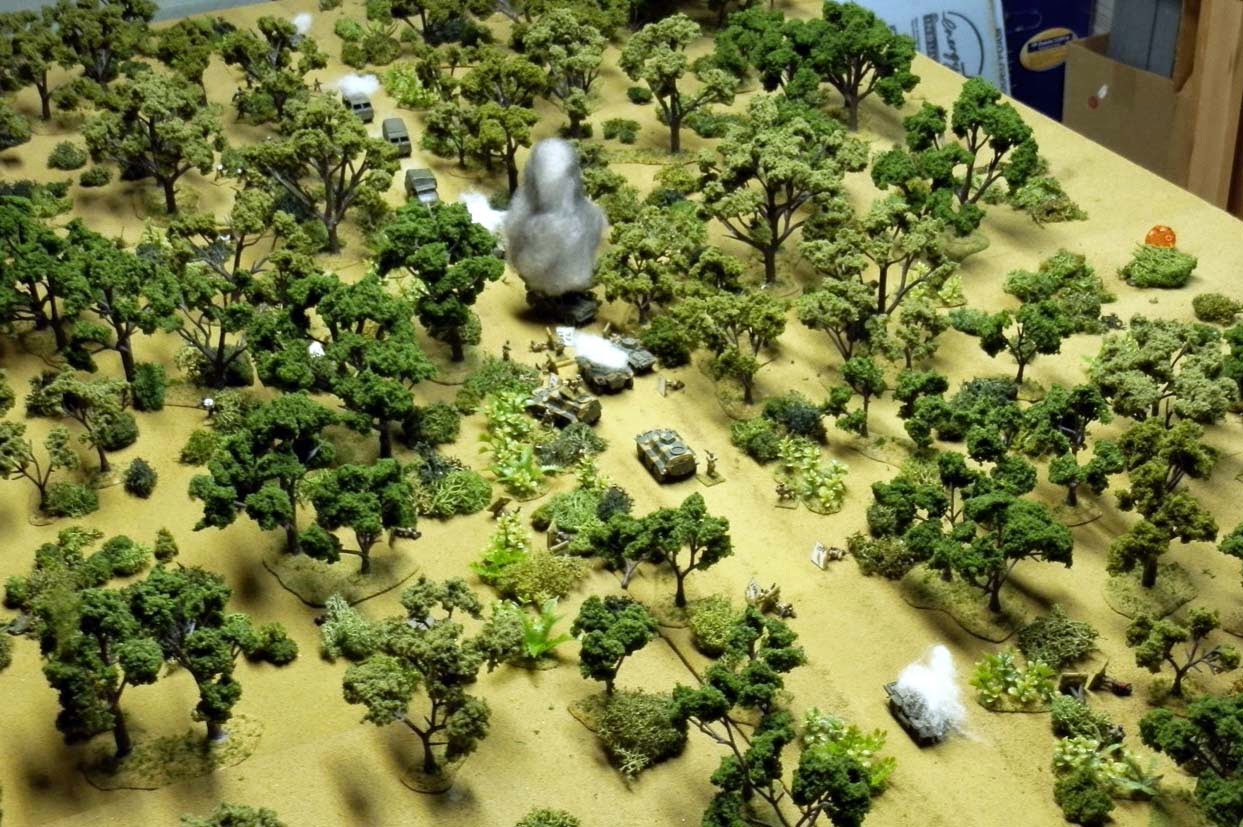 Damage done, the ULF simply melt away into the forest.

A young Lieutenant was commended for exhibiting great leadership during a hopeless situation.  He would never rest his eyes while on duty again, and would spend many nights off duty, wishing he that could close them.


Losses were heavy on both sides with the Uwandans receiving the worst of it, lost were:

Back at the base camp, Wakili was unmoved by the death and suffering that he saw on this day.  Instead, he pondered the lessons of his first real fight.   Casualties inflicted on the enemy suggested a great victory, but losses were unacceptably high.  A smaller force, using faster, and more simple hit and run tactics could have caused nearly as much damage with no more than a handful of casualties, if any.  The mistakes would not be repeated!

Where Is My Victory? (A Scene from a War Between African Imagi-Nations)

I wrote this right after my last Uwanda-Mugabia battle, while consulting the "fate tables" to see what civil/political fallout there might be in Mugabia, as a result of the failed offensive in Uwanda.  This should have been posted before AAR12, but here it is a little out of order :


The President was in his command post as reports began to come in.  News was positive as ground forces advanced toward their objectives; aircraft were on their way to various targets in support of ground operations.  The President was happy, his plan was progressing.

Then, chaotic reports of Uwandan aircraft seemed to come from everywhere.  Air battles ensued, and the president was no longer happy.  Though there were some victories, more was lost, than gained.  Ground forces would have to advance, largely without their promised air support.

The army joined battle on the ground.  One by one, advances were turned back, and by the end of the day, the President was very unhappy.

In "The Big Room" as he liked to call it, the President's staff was assembled.  He stood at the head of the table, staring down each of his senior officers.  The General of the Air Force was conspicuously absent.  Then the President's booming voice asked' " Where is my VICTORY?"

The Chief of the Army cleared his throat, but was cut off before he could speak.  "You are unworthy of your uniform!  You are fired!  You will leave, the uniform will stay!"  As the President's brother peeled off his uniform, and was escorted from the room in an undershirt and boxers, the President began to explain the next stage of the war with Uwanda.

Mugabia would "motivate" the ULF to expand operations in Uwanda, and in the meantime, the President would lobby his allies for more training, better equipment, and a more active role by foreign advisers.  The initiative had been lost, the President would have to police his house, before visiting his neighbors again.

In the days following Mugabia's defeat, the world waited to see what impact it might have on Mugabia's leadership.  The Presidential Guard was on high alert, and as word reached the people, there was some sign of unrest, but the president's grasp held firm.  Life went on, when and where the president permitted.


Posted by irishserb at 5:59 AM No comments: