Fleet movement during Strategic Turn 6 has created some very interesting situations, both in the form of escalating the scope of the war, and in the types of battles that are presented.  After movement of  Turn 6, here is the Situation: 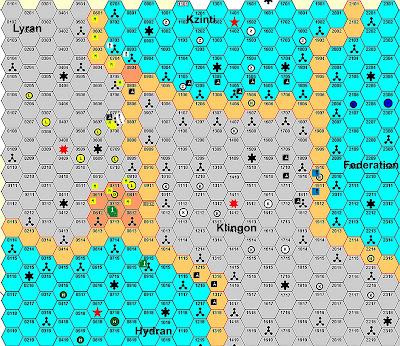 Kzinti fleets traveling down the 06XX and 08XX hex lines have converged on hex 0707, where they will do battle with the combined Lyran and Klingon fleets.  This collection of fleets will yield a battle of roughly 57 Kzinti ships against 59 enemy vessels.

Elsewhere, the Hydrans have advanced a combined fleet of approximately 45 ships into hex 0712.  The few Lyran ships in the area are very annoyed.

The Klingons have crossed into Kzinti space at five points along the Kzinti border, attacking the planet in hex 1105 and the Kzinti Battle Station in hex 1405. Very little Kzinti ship activity has been detected at any of these locations, with the planet and base being protected only by assigned fighters and police corvettes.

Additionally, the Klingons have entered the Hydran neutral zone in three locations, hexes 1215, 1316, and 1317, with numbering around 9 ships each.

The Federation has moved two fleets numbering 50-60 ships each into hexes 1910 and 1911 of the Klingon neutral zone.  (It seems that my opposite likes to do everything "Texas" style).  The Klingons have protested with a message saying, "Heeeeeyyyyyyy!"

The Romulans and Gorns are watching their screens, eating popcorn, while the Orions are trying to select their favorite shade of green.

New Arivals on the Painting Table

I've been doing a lot of terrain work for the last few months, but not much in the way of figure painting, though not for a lack of interest.  Just that all of my time and space has been occupied with the terrain.  But, over the last week, the bug to work on figs finally overtook me, so here is what I've started working on (In addition to another terrain project).

Late last year, I picked up a number of items, including some Zvezda Soviet trucks, some SA6 launchers and radar from QRF, and my daughter got me some M35 trucks from Old Glory for Christmas.  Over the last few days, I've managed to get these assembled.

The Ural 4320 trucks are my first zvezda kits.  To be honest, I'm not a big fan of plastic vehicle kits for 15mm.  As with my 20mm Vietnam stuff, I find the plastic to be too light, sliding down slopes and unable to "mash" a small piece of lichen , such that they end up "floating" above the table, when moving through brush.  Due to my style of games and terrain, they do not perform as well as metal and resin models.

Whining aside, they went together quickly and simply, were masterfully engineered and manufactured, and are beautifully detailed.  I got three of them for about $4 total through a credit card promotion and couldn't pass them up, as I have a truck shortage.  I'll deal with the weight, or lack there of, and am very happy with the models.

Next up are the Old Glory M35s, these were supposed to be the version with pintle mounted HMG on the cab roof, but the contents of the bag were without the HMG, and had soft canvas roofs.  Not a big deal, and otherwise are fine models.  There we as a little cleanup around the fenders/ running boards, and some evidence of mold decay on the front wheels, but easy enough to clean up and the parts fit together nicely. 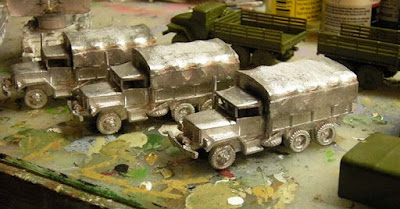 Last are my favorites out of this batch of models, the QRF SA6 Gainful SAM launchers and Straight Flush radar.  The SA6 launchers may look a little intimidating to assemble, but ended up being easier than I thought.  The two little tanks fit in locator holes on the back of the vehicle, that needed to be drilled out a little with a pin vise.  The travel rest for the missles mounts into two small rectangular protrusions on the raised engine cover.  I drilled locator holes for the rest, glued it in place, and then tilted it to the rear of the vehicle as I intent to have my launchers in launch configuration, rather than travel.  Next, I pinched the tabs at the hinge end of the erector inward slightly, such the they lightly grasp the hinge  pin, cut a short piece of .0625 brass rod and bent it slightly for the leg of the erector, and glued it to the base.  The upper frame of the erector was then glued into place along the hinge and at the leg.  The missiles were left off, and will be attached after painting. 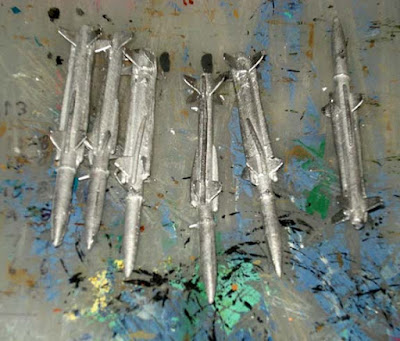 The Straight Flush radar vehicle has a bunch of pieces, and again can be quite intimidating. I just went off of photos of actual vehicles, and hopefully, my pics might be of some help for those with questions about construction.  the general arrangement of the dishes and cylinders is relatively obvious.  The upper cylinder can rotate independent of the lower cylinder based on photos, and I mounted mine offset to the rear of the large cylinder.  I attacked the rectangular dish to the large cylinder using the two little supports included in the kit.  These supports are fiddle, so take your time, and once past this stage, the rest of the kit goes much more easily.  A boxed affair with a flat deck attaches to the right side of the upper cylinder. Once the upper dish and it's supporting structure are assembled and attached to the top of the upper cylinder, there is a roughly "L" shaped gizmo that extends off of the left of the upper dish structure.  There is no obvious locator hole for this part, and it seems to be of a different design on every picture that I found, so I just drilled a hole in about the right place and glued it in. 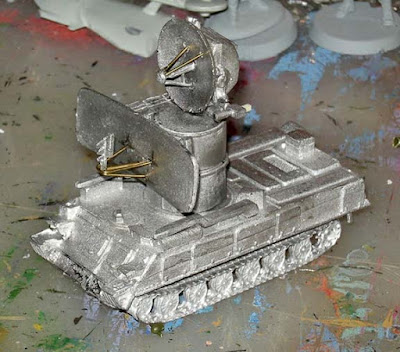 I also made some modifications to the radar and left side gizmo.  I added supports the the both radars wish roughly .015 inch brass wire.  The large rectangular dish receive two, generally "V" shaped supports, and two short straight pieces were added to the round dish.  These aren't necessary, and can't really be cast in tin alloy, thus they aren't provided, but dress up the model a little.  Additionally, I added a short length of square cross section plastic the end of the left side gizmo.  Again, this part has apparently evolved  much over the years, changing shape considerably.  I just arbitrarily picked a design based on being able to see the approximate mounting point, and went with it.  My modifications may not be exactly right, but I'm happy with the result. 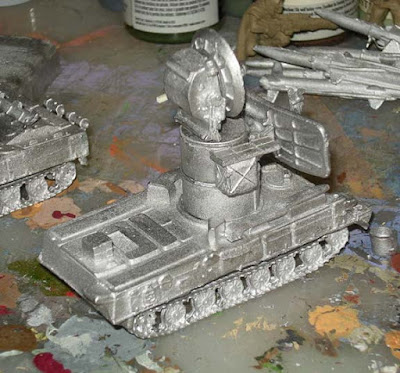 Now, if I can just find my paint brush, I can get some paint on these guys.
Posted by irishserb at 5:12 PM 2 comments:

SFB: The General War - Battles of the First Five Turns

Strategic Turns 1-3
The first pair of battles between the Lyrans and Kzintis occurred on the third strategic turn.  Both sides were very cautious, not being sure of what to expect from the other, and each hoped to gain a feeling for the tactics and weakness of the other.


In those first two battles, the kzinti fleet moved at or near the maximum speed of the fighters, launching volleys of drones at the Lyrans from both ships and fighters.  The Lyrans confounded the Kzinis and their drones by maintaining speeds equal to or above that of the drones, while trying to find a Kzinti weakness to exploit.


The result of both battles were similar long range standoffs, with fleets of 12-20 ships (the Lyrans were slightly outsized and outnumbered) sparring with long distance disruptor and phaser fire.  Each side lost 1-2 light vessels in the Police corvette to Destroyer classes.

Given the size of the fleets involved, the battles were very anti-climactic, neither lasting more than two turns, and nothing really being achieved.

The Kzintis advance through Lyran space continued, while the Lyrans consolidated forces and better matched the enemy's numbers.  Despite attempts at adjust tactics, neither side could find a an advantage with the next pair of battles ending in much the same way as the first pair.

The third battle saw the Kzinti fleet sandwiched between two smaller Lyran fleets, such that the Lyrans outnumbered the Kzinti 26 ships to 16.  The Lyrans largely failed to take advantage of their numbers, destroying only a single light cruiser in addition to the customary mutual exchange of a frigate.

The fourth battle was much as the first two, with both forces again dancing around, unsuccessfully finding a weakness in their opposite, and again losing only a couple of light vessels.


Enter the Klingons:
On the second strategic turn, a Kzinti fleet entered the neutral zone and proceeded over the next couple of turns to advance "down" the Lyran/Klingon neutral zone.

The Klingons found this insult intolerable, and countered the 16 ship strong Kzinti fleet with a smaller fleet of their own, consisting of mostly of F5 and E4 variants with a single D6 acting as the flagship.  The Klingons lost three of the smaller ships, while causing only superficial damage to the Kzinti.

Klingon honor was upheld, and a glorious victory was declared.  The Klingon fleet regrouped some distance away from the battle, while the Kzinti "fled" into Lyran space.  The result of the battle was militarily meaningless, but politically important, as it resulted in the Klingon Empire getting involved in the conflict, somewhat earlier than they might have otherwise.

The third pair of Kzinti Lyran battles proved only to be more frustrating to the Lyrans than the previous battles.  Despite achieving advantages in numbers and/or firepower, the Kzinti disengaged after a single turn in each battle, not allowing the Lyrans to close to combat, and despite losing a Command Cruiser in one of the battles, the Kzinti losses were light, and they continued to further penetrate Lyran space. 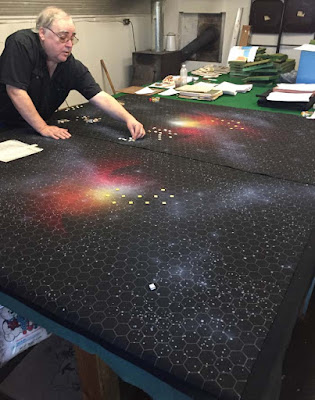 Our last game, the Big Cat deploys a seemingly endless
stream of drones against my noble Lyrans.  Kzinis in
the center, Lyrans far and near on 1.5" hex Hotz Mats.


The Strategic Situation After 5 Turns

During the first three Strategic Turns, the impatient Kzinti took the initiative, invading Lyran space.  This, combined with the fact that the Lyrans did not violate Kzinti space, resulted in the Hydrans being bound to not get involved.  The Hydrans were bound by treaty to come to the defense of the Kzinit, but could not aid them when they were the aggressor.

The encounter between the Klingons and Kzinti in the neutral zone relaxed the Hydran restrictions slightly, resulting in the Hydran incursion into the Lyran neutral zone (Hex 0713) during turn 5.

Lastly, the Kzinti fleet traveling down the 08XX hex line of the neutral zone, also triggered the release of the Klingon Expeditionary Fleet, allowing it to head to Lyran space, entering the NZ in hex 0808.  This fleet advanced into Lyran space and up the 07XX hex line. 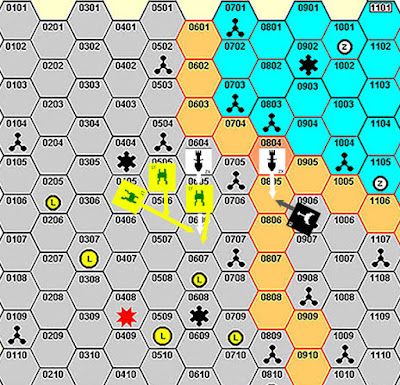 I've been working on a bunch of odds and ends over the last couple of weeks, but don't have much to show for it.  About the only thing I've managed to finish are some free standing rock formations and boulders to go with the cliffs that I recently made.  Here are a few pics: 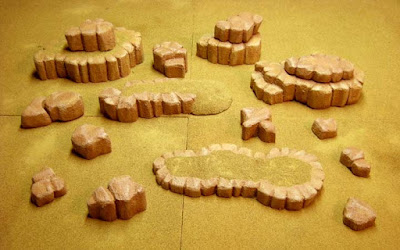 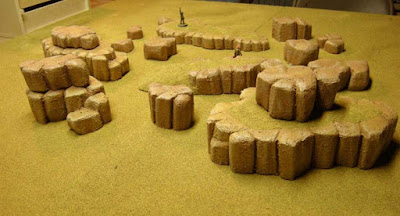 I've also added a couple more cliff pieces, and have the road sections and water fall for the stream about ready for paint, but I'm kind of losing my rock mojo, so I think that I'm going to move on to some other items in the short term, and maybe play a couple of games.
Posted by irishserb at 6:06 PM 3 comments: