Progress has been a little slower than I had hoped, but here are a few more WIPs of progress on my "space bubble".  I've managed to get a start on the "ship" part of the model that sets (and travels) inside the space bubble.

Construction will mostly be from styrene sheets and shapes from Evergreen and Plastruct, as well as, a few beads and whatnot from the craft store. 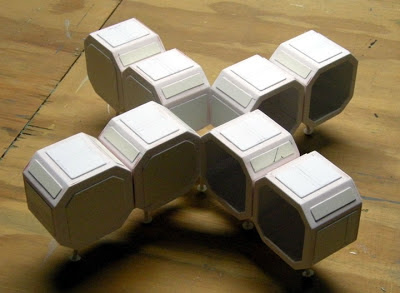 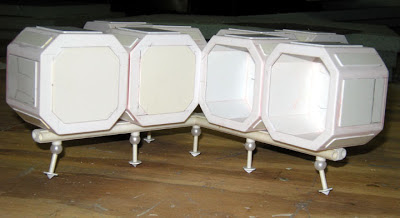 ﻿
﻿
Unfortunately, I don't have a way to hold the other pieces in place yet, so it doesn't look like much yet.  The legs need to be shortened and adjusted for fitting inside the bubble, and lots of bits need to be added yet.

The idea is that this thing will fit in the bubble and is the actual container in which the asteroid miners are transported. 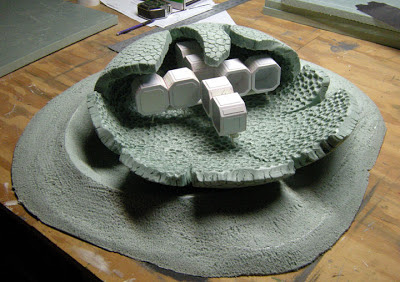 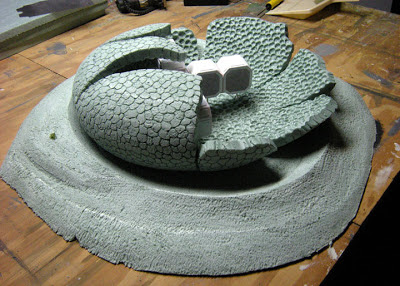 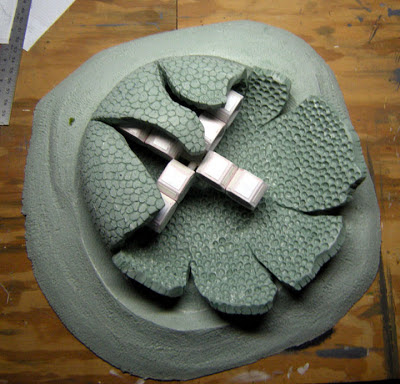 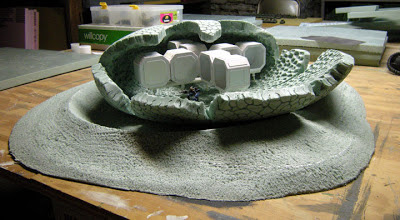 And , here's a pic where you can actually see an asteroid miner for size reference.﻿ 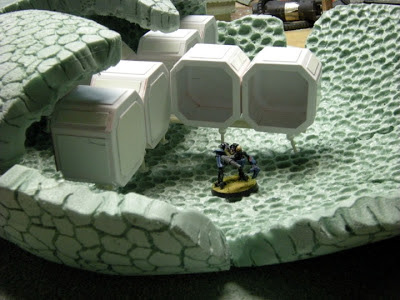 In retrospect, I probably should have made the "ship" about 15-20 percent smaller, as it would have fit in the bubble a little better and would have still looked to accommodate the figs, but I'm committed now.

I expect to work on it this weekend, so will probably post a few more pics Saturday or Sunday evening.

Posted by irishserb at 8:59 PM No comments:

28mm Not Quite a Spacehip Update - Space Bubble Takes Shape

I managed to nearly complete construction of the space bubble part of my contraption yesterday, so thought I'd share a few more pics. 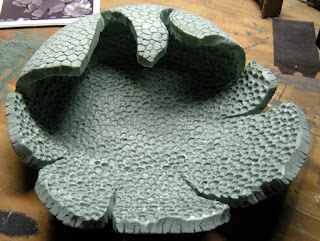 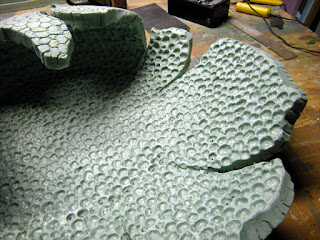 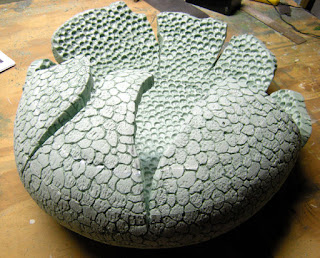 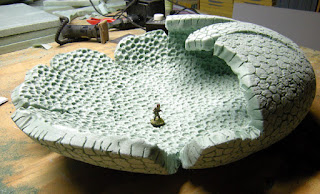 The exterior has a scale-like texture created with one of the Foam Factory hotwire tools, while the pitted interior texture was "dremelled" into the model.  It still needs a little clean-up work, but is mostly ready for priming and painting.  The fig is again the 28mm Copplestone scavenger for size reference.

I know that a number of people have been looking at this project thinking that I've totally lost it (including my wife an daughter, who offered, "I thought you were making something for gaming, what's with the dinosaur egg?)  The "space bubble" is basically the skin of the vessel that will transport the aliens to earth.  Inside will be a more "conventional" structure containing the aliens themselves (which I did get a small start on yesterday).

I'm hoping to get the next piece mostly together today, so hopefully another post will appear tonight or tomorrow.


Posted by irishserb at 7:49 AM No comments:

The Space Bubble - Still Not Quite a Spaceship in 28mm

Here are a few photos of the "space bubble", the second part of my 28mm pseudo-spaceship/time machine/alternate universe portal thingy.

I got a couple of hours to rough the thing out tonight, using the same tools and materials as for the crater with the addition of the Foam Factory foam cutter.  I am surprised that I got as far along as I did, though there is still a lot of work to be done, it has definitely taken shape.

The first three views show the process of mounting up the layers of 1 inch thick foam and cutting the basic bowl shape with the hot wire foam cutter and surform. 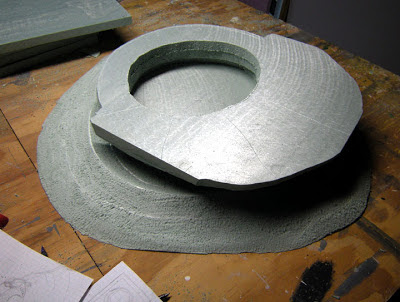 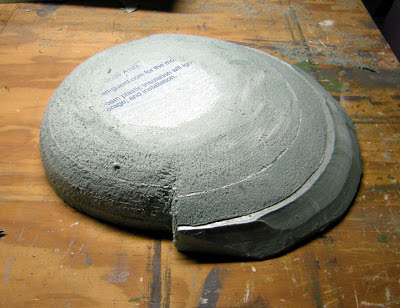 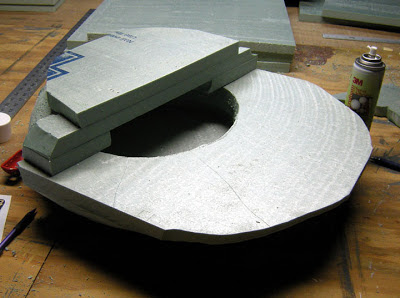 The next view shows the complete bubble roughed out, with sides splayed open after impact.. 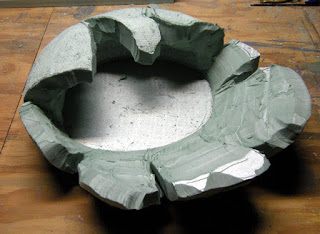 The last three views are of the bubble resting in the crater.﻿ 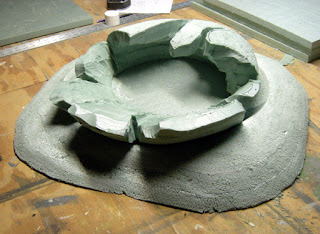 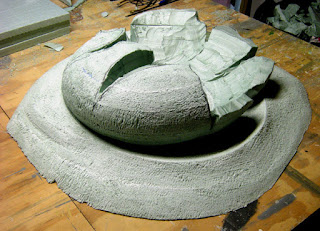 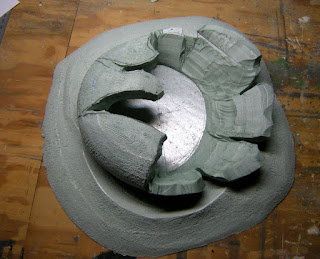 There is still a ton of work left to do, the walls need to be thinned to around 3/4 inch thickness (they vary up to 3 inches thick right now), and then textured inside and out.  I'm hoping to get most of that done tomorrow, and maybe a start on the conveyance inside as well.

I'll post some more WIPs in the next day or two.

Posted by irishserb at 9:37 PM No comments:

The Job Pod, Not Quite a Spaceship in 28mm

Told ya' I wasn't dead yet.  Six weeks ago, I thought the crazy at work had stopped, but then had a relapse of 14 hour days.  In a way, it was a good thing, as my first hobby project of the year was inspired by a project at work.

Among my interests are near-future, sci-fi, and post-apoc games, subjects that I haven't done much with in the last two years.  One of my gamers block victims has been creating a spaceship for the Alpha Forge Asteroid Miners that I purchased several years ago.  I had pictured them as being what hopped out of the flying saucer near that small "out west" town for my locals vs. the alien invaders scenarios.  I had also planned to use them as part of my post-apoc  silliness.  But I could not come up with the right delivery vehicle to transport them from their storage box to my game table.

Well, about three weeks ago, while reviewing about a million  photos at work, I receive a message from the gaming gods.  Inspiration came in the way of a SEM photograph of a spark.  You know, a little piece of metal that was sheared off of something, glowed for a second, and then ended its life as a piece of dust.  I glanced at the photo, and immediately I saw it for what it was.  Before me was a means of inter-stellar transport.  Well, sort of.

What I saw was basically a steel bubble that had burst on impact with the floor.  A magnificent little thing, with a pebbled exterior, cris-crossed with shallow valleys, splayed open and exposing a cratered moonscape interior.  I also saw it setting in an impact crater , smoking, with a ship of sorts contained on the inside, and asteroid miners exiting their transport cells.  This is what too many long hours will do to you.

I realized that I suddenly had my "spaceship", and that I could now continue with the end of the world.  So, I managed through three more weeks of 14 hour workdays, and have finally begun my alien "spaceship".

I worked up some very basic sketches, along with some background story for my games.  The ship quickly morphed into a more of a time machine/alternate universe portal type thingy, consisting of a shallow impact crater, an exploded bubble of rocky looking material, and a containment vessel for the critters inside.  Here are a few of the sketches (sorry they aren't better quality, but I was in a bit of a hurry): 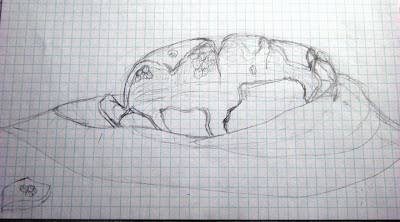 Above is the initial concept, the burst "bubble" setting in the impact crater. 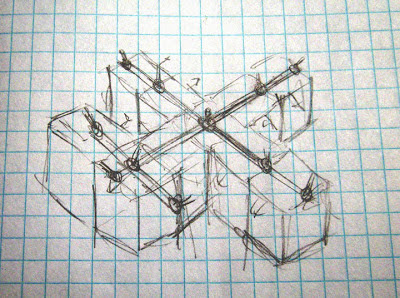 In the bubble is the "shipping container" for the "work crew" of asteroid miners.  A series of small chambers and equipment "cells" linked together through a series of beams, tubes, and cables, suspended within the bubble by a series of stabilizing arms. 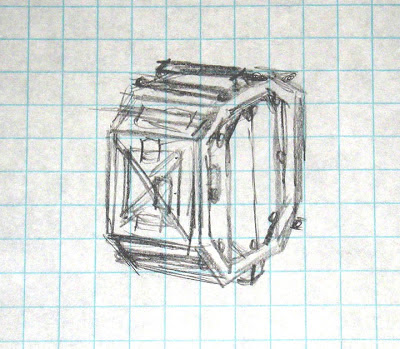 The individual chambers will be eight sided cells, about 2-3 inches across.
Upon getting a free evening, I quickly cut up some foam, and began work on the crater. Below are materials and tools needed for this phase of the project. 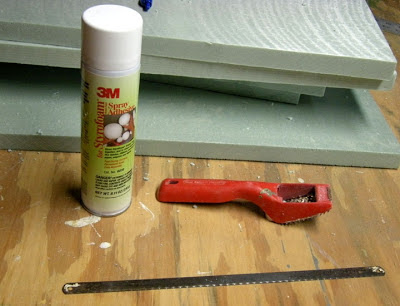 The foam is from Lowes, 3M Styrofoam spray adhesive, a surform tool, and a hack saw blade. 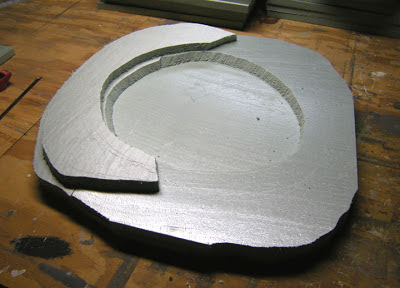 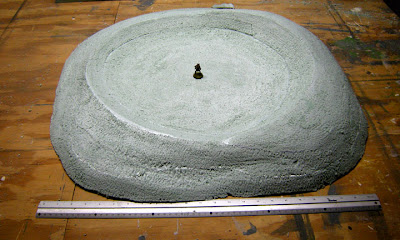 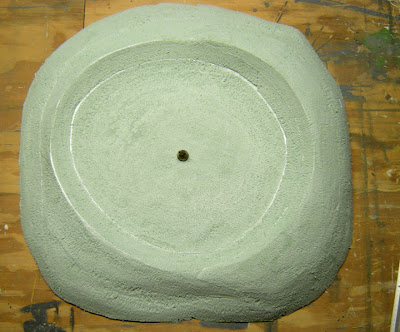 A 28mm Copplestone scavenger stands in the middle of the crater to give a sense of scale.
Next I need to rough out the bubble. Once I have the basic bubble shape completed, I will refine the crater so that the two pieces fit properly, and finish detailing the shape of the crater.
I've got to head back in to work now, but expect to work on the bubble tonight and tomorrow.  Hopefully I will have another post up before the weekend is out.  Once I get this together, I will post some of the background story trying to justify this silliness.
﻿

Posted by irishserb at 7:26 AM No comments: