The battle report below is part of our Star Fleet Battles campaign that has been on hold since the rise of Covid-19.  Part one of the battle was posted in August, 2019, while part two was written up in the weeks following the conclusion of the battle.  Unfortunately, I misplaced the photos of the middle part of the battle, which I didn't re-discover until recently.  So nearly two years later, I am posting part 2 covering turns 2-8 of the battle.

Part one of the battle is included in the post linked below:

Part 2 of the Big Fight 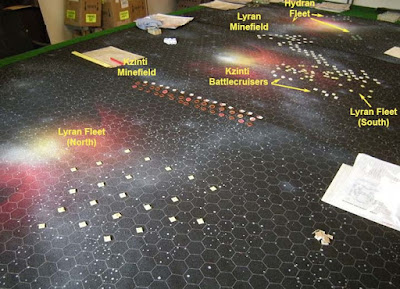 The positions of the fleets at the beginning of the battle.
Large areas of orange and white markers are mine fields
laid by the Kzinti and Lyran southern fleet.

Over turns 4 and 5, the two Lyran fleets merged and slowly reformed, while heading toward the Hydran fleet, which now included 9 Kzinti Battlecruisers.  The Hydrans began launching fighters, which lead the attack against the Lyrans, with their ships dropping mines behind their fighters.

Again, the Lyrans in the foreground, probably during turn four,
trading escorts for Hydran fighters.

Our session ended after about four hours of play, with approximately 105 ships still in play.  The Lryan light and heavy cruiser classed ships had just come into useful combat range of  some of the Hydran vessels, with Lyran losses of 20 small ships to the 6 Kzinti BCs.

We picked up the battle two weeks later, The Hydrans continued to unleash fighters, drawing much of the available Lyran phaser fire, and causing some damage to Lyran ships.  As the Hydran ships closed into battle, they also continued to lay mines adding further chaos to the Lyran advance.

The Lyrans carefully worked their way through the mines, losing a couple more smaller vessels to a combination of mines and fighters.  Through turn 7, the Lyrans lost another 6 light ships and 3 War Cruisers (a heavily armed light cruiser); while destroying 2 more Kzinti BCs, 3 Hydran heavy cruiser classed ships, and 3 Hydran FF classed vessels.  Also, a goodly number of Hydran fighters were caught in the explosions of the Kzinti and Hydran ships. 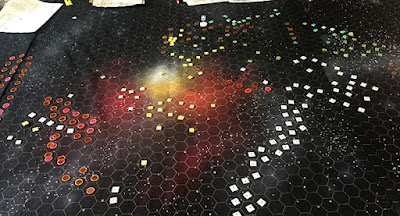 The Lyran fleet continues to advance, having separated into two
waves, CWs and smaller focused on clearing out fighters and
CA and heavier ships holding fire for the combined
Hydran/Kzinti ships (green, upper right). 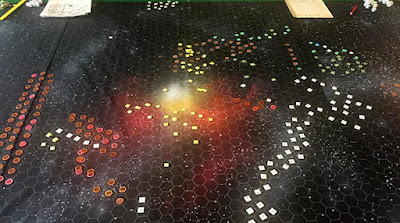 Lyran ships passing through the mine field (orange markers),
and are veering off to the left.  The Hydrans (green, upper right)
are disengaging to the right.

During the final turn, the Lyrans swept up a few remaining Hydran fighters and continued to exchange with the Hydran vessels, destroying three more CA classed ships and two Hydran Lancers (destroyers) for no losses of their own.

The relative positions of the ships at this point put the Hydrans at a tactical disadvantage with their rear shields exposed to the Lyrans, who largely had their bigger front and right front shields facing the Hydrans.  Combined with the Lyran fire, was the collateral damage caused by Hydran ship explosions that furthered the success of the Lyrans. 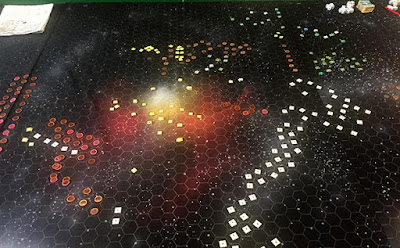 End of turn 8, the Hydrans break off and disengage, while
the Lyrans planned to take two turns recharging weapons
at speed, and then re-engage, had the Hydrans stuck around.

Through these last two turns, the Hydrans lost in the area of 100 fighters, and by turn eight decided to break off the engagement.

Though neither side accomplished their objective, the Hydrans probably end the battle in a better strategic position.  Their huge loss of fighters is largely replaceable by next strategic turn (they brought a lot of spares, stored in freighters), and though they lost a fair number of heavy cruisers classed ships, they still have a huge fleet in Lyran space.

The Lyrans lost 29 ships, though the largest were 3 War Cruisers, a light cruiser classed ship.  The remainder were destroyers, frigates, and police corvettes.  The Kzinti/Hydran fleet lost 14 BC/CA class ships, and 5 smaller vessels.

The Lyrans have very few escort ships remaining, while the Hydrans are free to still cause chaos in Lyran space.

The battle consisted of eight turns, lasting nearly 10 hours, and resulted in 48 ships being destroyed.

I'm not sure when we will play our next game as the Delta variant surges, but I expect that our next meeting will simply consist of us just getting back up to speed on where everything stands midway through Strategic turn 9 of our SFB campaign.

Didn't get much done this past weekend, mostly organizing terrain and labeling terrain storage.  One nice discovery was finding about 6-7 squre feet of  20mm jungle foliage that I made several years ago, which fills most of my remaining void for 20mm Vietnam.  I knew that I had some, but remembered it as being about a third of the amount done.  I'm still awaiting the arrival of some miniature bamboo, and between that and a few deciduous trees,  one weekend of terrain making should knock out the last of the green stuff for Vietnam.

My Vietnam rice paddies are moving slowly, as I waffle on design and finish characteristics.  Hopefully, I can make some noteworthy progress on these through next weekend.

Tied into the terrain storage and labeling is the process of identifying and labelling as many of my figs as possible.  That will make finding what I need for games a  little easier, plus, it should help my wife get rid of stuff should I get run over by a cement mixer or something.

As a result of that effort, I now know why I almost never seem to make much progress working on all of this stuff.  I currently have stuff to game 28 genres/periods/theatres with miniatures.  This includes three different basic sets of modular terrain in green, yellow, and "jungle" , with 21 subsets of period specific specialized terrain.  Over 700 square feet of modular foam terrain in all.  There are at least 151 armies and factions, ranging in size from 6 figs to around 1500, with the figure count total being back in the 17,000 range.  I know people with collections that dwarf that, but still, it's a lot of little dudes.

I really envy guys who can just focus on one or two periods.

I finally opened and inventoried an order that arrived near the end of July from H&R, over 700 6mm infantry for WWII, plus a few vehicle samples for the 1940 French.  The figs will yield somewhere around 230 stands of infantry for the British, French, and German armies.

I started to set up a big 1940 game earlier this year, and realized that I really didn't have enough infantry units, so put together a big order instead.  Guess what I'll be painting in the near future.

Signing off for now.  Stay well out there.

Posted by irishserb at 4:41 AM No comments:

My jungle is growing with the addition of more stands of foliage and some palm trees.  Constructing these went a little slower than I had hoped, so no progress on the rice paddies this past weekend.

Here are some pics of the latest progress: 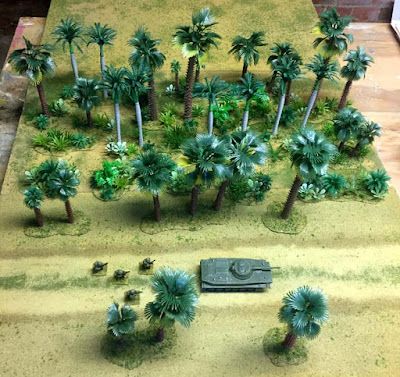 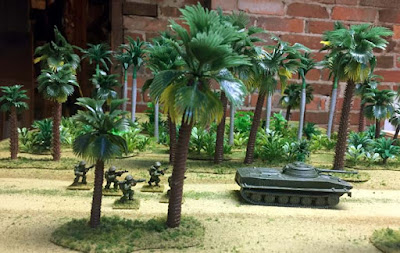 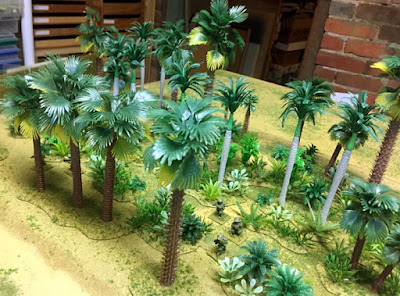 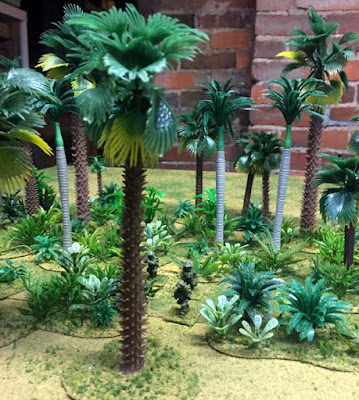 I based three types of tree, most with jungle ground foliage around the trees, and a few stands without for cleared areas.  The trees need some paint/wash, particularly the trees with the grey trunks, so going to put them aside for now, and the paint work on everything at the same time.

The figs are 20mm Britannia NVA, don't know the maker of the PT-76, and the road is actually for 28mm sci-fi, as I haven't gotten to the 20mm Vietnam road and trail terrain yet.

Rice paddies are up next, and then a few bunkers.