I've been working on 6mm modular terrain tiles made from 1 inch thick XPS foam insulation board, and thought that I'd share the process.

It was around a year ago, when I realized that I didn't have enough paved road terrain tiles (for my modular terrain) for gaming in Cold War Germany.  I had forgotten that some years back,  I had given a bunch of it to a friend to use in games run at his house.

After taking stock of what I had left, I realized that I was probably better off to just start over.  My old highways (two-lane paved roadways) were patterned after US roads, and didn't look much like those of West Germany.

My first stop was Google Earth, studying both the North German Plain and the Fulda Gap, getting a feel for how the road network was laid out and the types of roads in modern Germany. I then compared those to my copies of 1950s army maps of Germany, noting the expansion and development over the decades since the Cold War was a teenager.

I remember reading decades ago, that in Germany..."you couldn't go 2000 meters in any direction without bumping into a town or village".  After studying the various maps, I have to say that I understand the implications of that much better now.

Starting with terrain for the North German Plain, I was surprised to find how dense the road network was, and how little of it was laid out in a grid type fashion (biased by my experience here in Ohio).  There are a lot of intersections at odd angles, which is somewhat more interesting than what I had expected, but also harder to model on the tabletop.

As I looked for places that the forces of 1st UK corps might wait for visitations from 3rd Shock Army, I was surprised to find that relatively open fields of fire were seldom more than 1200 meters, meaning that my table, measuring out to 5400 meters in game scale, could well be three to four battlefields in depth.  What this meant was that my road network would need to be much more dense than I had envisioned.

I searched the internet for photos of Germany in the 1950s, gaining some understanding of construction materials, roadway markings, and various other details, and collected dimensions from Google Earth.  Road widths varied somewhat, but there were commonly recurring widths, and I finally decided to go with a single standard road with of around 24 feet (approximately 1" wide in 1/285 scale), rather than creating multiple sets of terrain, with 18', 22', 30' widths, etc.

I've long used a modular terrain system, incorporating 12 inch square foam terrain tiles, and many years ago, adopted a practice of locating road and waterway centerlines  3 inches from the near edge of the tiles, rather than centered on the tile, as might seem more obvious.  I found that the offset of roads and waterways offered a number of advantages in design and construction of the tiles.   Realizing that my description here is about as clear as mud, the following diagram will hopefully make a little more sense of this.

This offset centerline method proved favorable in building diagonal roads, made winding roads easier to model, and permitted me to get combinations of water, rail and roadways onto the same tile in parallel without using different conventions for each.
As long as the centerlines and widths match at the edges, all manner of paths can be following in between.  Intersections, towns, and when using a 2'x1' tiles a second type of diagonal road can be added.  Waterways are cut into the tile with a Dremel with router attachment, typically at 3/8th inch depth, with a slightly rounded bank on the edges.  Here are some examples of other tile configurations: 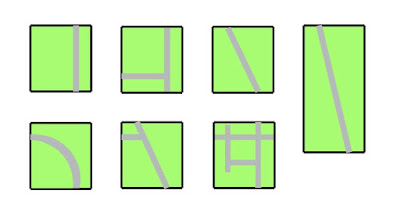 The longer 1'x2' or even 2'x2' tiles can be used to create larger constructs, or topographical features.  This offset centerline method works fine for my 15mm and 6mm gaming (with different road withs), and though I haven't done it, the same should generally work for 25-28mm using 2'x2' panels.
I use both modular and freestanding hills, with modular tiles using the basic slope on the edges of 1" rise over 6" of run.  Generally, the "front" half of the tile involves slope, and the "back half" of the tile is more or less flat.  In between the edges, the tile can do whatever you want being as constant or irregular in profile as you'd like.  Modular hill tiles require three basic types of tile; "Straight slope", Inside corner" and "Outside Corner".  The diagram below shows top and edge views of the three basic slope tiles.

Over the years, I've used different edge profiles for a number of different sets of modular hills, cliffs, etc.  My 28mm cliff modules use the same concept, just with a very different profile.  Roads and waterways can be added to the hill sections, with roads being pretty easy, and waterways taking a little more effort, incorporating either gentle downhill streams or waterfalls.
For this project, I'll only be adding a couple of road/slope tiles, but will need to add more later for battles set in the Fulda Gap and other parts of Germany.
I'll post part 2 of this project, after getting a little more work (and photos) done, so that's all for now
Posted by irishserb at 5:24 AM 10 comments:

I've been slowly moving along on my France 1940 project over the last few weeks.  The German infantry are done.  Just waiting to be boxed: 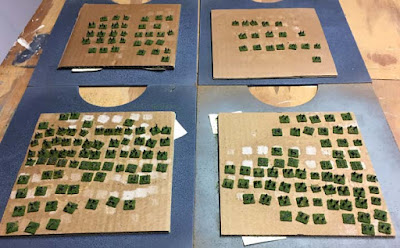 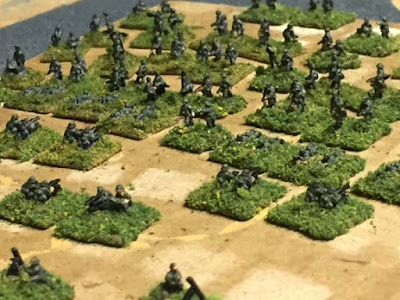 And I've filled in most of the gaps with respect to 1940 aircraft.  All are primed, and the French are receiving paint. 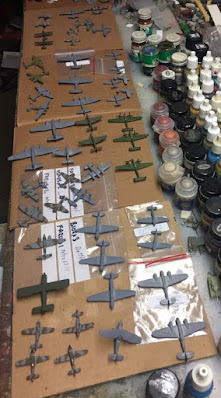 On a side note, orders to the US from Scotia and H&R are taking about three weeks to arrive.  So shipping is a little slower these days, but really not too bad.

Posted by irishserb at 4:17 AM No comments: