I was born in the After, so never knew the world  Before.  When I was real little, we had a hard time, trying to get enough food, and get drinkable water to keep us alive.  Lot of people moved around, but we stayed in one place. My folks tried to protect our homes, mostly broken down shacks built in what was left from Before.

When I was about 8, my Pa got shot with an arrow.  The nurse lady kept him from dying though. Well, sort of.  He was never really the same afterwards, and he died about two or three years later.  Things got better though.  People worked together, things started to change.

My town is call Floyd.  I know, sounds like a dude, but its a town, and now we do okay.  We got water, food, schools, and even a clinic with a doctor.  Its pretty safe now.  Probably mostly because of the Confederation and Territorial Guard.  Before that, things was a lot tougher; gangs would pass through killin' and takin' what they want.  Lot of people died like my Pa.  Happened pretty regular.  But that all changed with the Confederation.

The Confederation has been trying to expand, trying to make people more civilized, maybe make it more like before.  Before the end, I mean.  And me, I'm a soldier in the Territorial Guard.  Actually, I'm a scout.  I like it; because, I get to ride around in a "Chupacabra", a little armored truck.  We call it the "Goat". 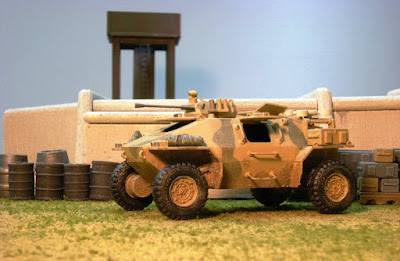 Affectionately known to their crews as "The Goat",
the M11 Mk1 Chupacabra armored car.


There are three of us in the Goat; Panky is the commander, Sam drives, and me, Charley, I'm the gunner and pretty much everything else.  Mostly we do surveying and mapping,  check on people or things, and carry messages or things like medicine around.  Sometimes we actually get to scout, but that only happens when someone is trying to attack us, usually a big gang or something.  The best thing though, is when we get to explore. 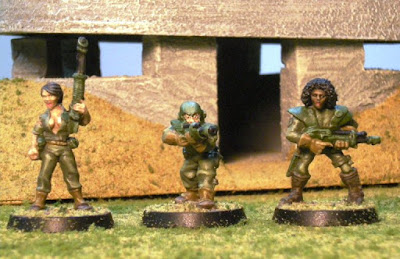 Scouts in the Territorial Guard, and the crew of the Goat,
Panky, Charlie, and Sam.


We have old maps, and they help a lot, but a lot has changed too.  Places aren't the same, I know there's a lot less people, and sometimes things like rivers aren't where they are supposed to be.  They say that things must have changed a lot up north, for stuff like that to happen. I don't know.  I like exploring the ruins, finding things from the past, finding what and who was there.  It must have been amazing in the Before.

We find new towns and people too.  Usually they get excited when they see us, though usually pretty cautious at first, too.  But after they get talkin' to us, they relax a little, and we mostly make friends and do a little tradin'.  Once in awhile, we get threatened or shot at.  Usually we just avoid those places and note it on the map.

When we cover new territory, we map it with our Drone.  We have this little flying drone that we carry, it takes pictures and can survey the land.  Then we take the survey back, and the TG updates the maps.  We can also use it to scout things out for us, but we got to be careful.  We let it get out of range once, and had to go chasing after it.  Panky was not too happy that day.

I like being in the Guard; it's a good life for me.  Don't know what I'll do when I get too old for it, but for now at least, I'm a scout from Floyd.