AAR18: Silence of the Priests

Well, I didn't get this up as "shortly" as I expected, when writing AAR 17, but here it is, finally.  This is what happened to the Priests supporting Uwandan forces south of objective B14. 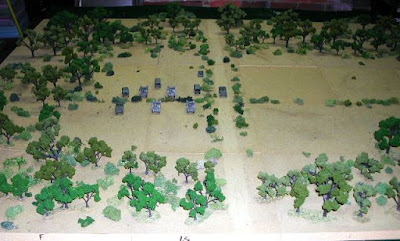 As soon as Wakili heard the sound of the cannons, he knew his luck had changed.  After a short advance through the trees, he saw his prize and barked at his troops "Abdi, take your men and attack from their right. Go! Go!...On my signal!" 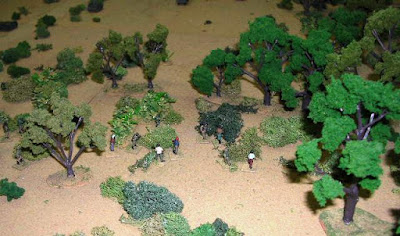 ULF fighters advance north, to the rear of the Priests.

The battery, its supporting trucks and HQ were busy supporting the battle north of them, when machinegun fire and RPGs blew up a truck and two Priests.  Chaos ensued, and in the next minute, two more trucks and three more Priests were destroyed.  Crewmen futilely tried to return fire to their rear and right, but the damage was done.  Quickly, the ULF retreated back into the woods, and the surviving Priest and command track rushed forward to get away from the attack, leaving Uwandan forces at B14 without artillery support. 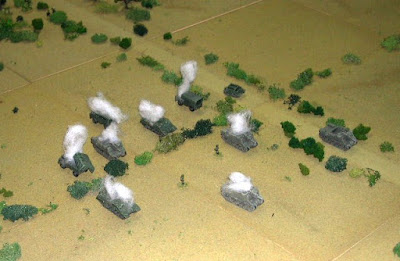 It wasn't much of a battle, in less than two minutes the battery was converted from a death machine to a dead machine.  Loses were as follows:

Edit:  Forgot to mention that I had to use a couple of Sherman hulls as M7s, as I was two models short.  Been a long time since I had to do that.  Also, ULF force consisted of 28 men.
Posted by irishserb at 7:41 PM 2 comments:

I've been wanting to add various bits to my African imagi-nations villages and towns to give them a little more character.  Among the items to add is a market, a couple of stores, a hotel, and a well, where the villagers can get their water.  After a brief search on the net, I settled on two wells, instead of one.  One is a simple stone lined hole in the ground, the other a more modern concrete fixture with a hand pump.  Here is an in progress shot. 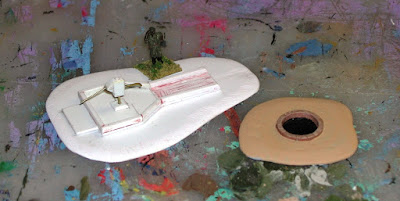 And a couple of pix of the completed wells. 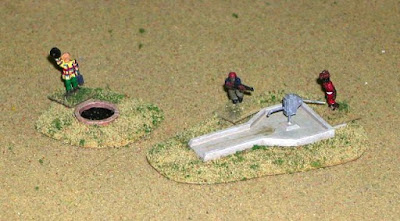 I've been working a lot lately, and haven't had much oomph to paint or build anything. But, I have been sorting through stuff, trying to reduce my clutter and trying to narrow the number of projects to under a million.

During this adventure, I discovered some old figs that I didn't realize that I still had.  My old 20mm US Vietnam and "Modern" Cold War infantry.  I believe the figures are from the Firefight 20 line from Modelers Mart, and some were probably purchased from the old Breastplate Hobbies in Boardman, Ohio circa 1983-84.

Here are some of the figs: 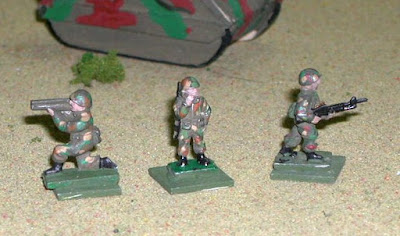 And yes that is a crude M113 in the background. 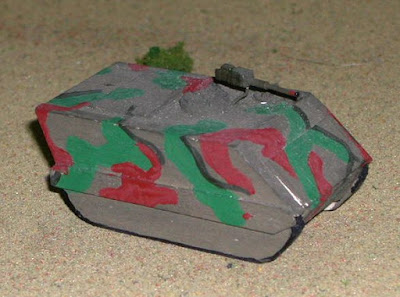 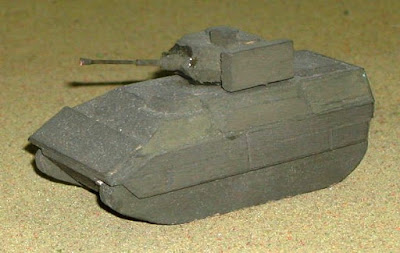 I bought a couple of metal jeeps from the line (which I can't find), but as a starving student in college at the time, couldn't afford the larger vehicles, so built my own.  There also used to be a BMP2 (probably the best of the lot), but I haven't found that either.

The figures stand about 22-23mm tall foot to top of hat/helmet, and look rather stiff and clunky compared to more modern figs, but we loved them.  Here are a few pix comparing them to Britannia's 20mm Vietnam figs, 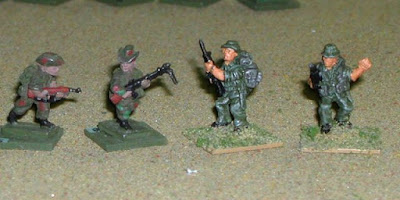 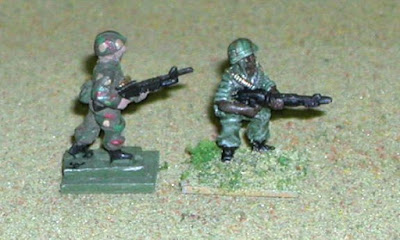 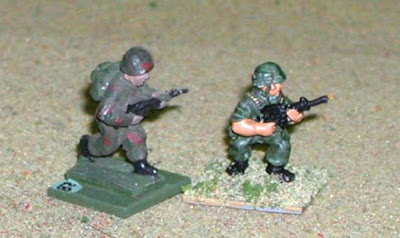 Originally, I started buying the figs to do NATO v. WarPac games, but we had an immediate interest in Vietnam after encountering our first Nam game at a convention at about the same time.  Then, a short time later, we saw the movie "Uncommon Valor" and we knew what we had to do.

I got a couple of Huey models, painted the NVA, and Craig of Gaming Models built the prison camp. 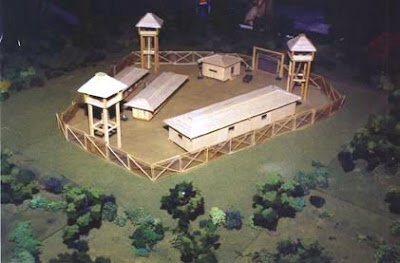 The only photo that I have of Craig's original prison camp model circa 1985.

The camp was based on a three foot square of blue foam, with around 40 individual fence sections that plugged into the foam, and could be pulled and place on their side if and when the fence was breached.  Inside were the camp CO's building, a barracks for the guards, two prisoner buildings and the three watch-towers.  Each tower featured a blown up version, should they suffer any adversity during the game. It was built from bamboo, pine, and balsa.

We ran games at the Convention in Canton, OH in the mid 1980s, and may have taken it to Nowscon in Cleveland around that time (and possibly a couple other cons as well).

In addition to the US and NVA, I had VC, East Germans and Soviets, about 40 of each, but unfortunately, I sold some off and gave some away, when I switched over to 15mm.

In time, I got back into 20mm Vietnam, first with 20mm FAA figs (nice figs, but limited line), and then Britannia.  Anyway, that's my flashback, I'm feeling better now. Time to start a new project.
Posted by irishserb at 10:10 AM 3 comments:

I received a copy of Star Fleet Battles for Christmas in 1982, played my first game, a fight between a Constitution class heavy cruiser and a Klingon D7, that evening, and a few days later met my now long time friend Craig, who I would battle many hundreds of times in the Star Fleet universe.

SFB became one of the corner stones of the old gaming group, and we would eventually master the game, such that playing 15-30 ships per player with all associated fighters and pseudo-fighters was not a problem.  Only two of us in the old group really went for the Starline 2200 miniatures, and as a result, we only played a few very small battles with miniatures.

SFB was at its peak in our group with the boxed version and the three small expansion sets, it lost some luster with the Captain's edition rulebooks, and went to the back burner as the group members slowly went off in search of education, employment, families, etc.

I've never completely gotten away from SFB, playing the odd game every few years or so, and the occasional game with one of the old group members, usually Craig.

Over the years, Craig and I had always both intended to pursue SFB in miniature, but it just never came about.  The 120 miles between us, and the interruptions of family and job always pushed SFB back a little longer. A few years ago, I decided to slowly pursue rekindling the SFB miniatures idea on my own.

I went to Origins that year, discovered ADB in the dealers room, and picked up a few packs of ships, I had intended to pick up some Zocchi Starships as well (I had always seen him there in prior years), but could not find him that year.  The rekindling was slowed a little, but didn't die. I  painted a few of the ships, and then they waited in limbo on my paint table for the next step.

The four new ships (Kzinti and Klingon) after
collecting dust for a couple of years.


I sorted through the rules, and decided to go back to the old boxed version and expansions, chased down the SSDs, and played a couple of games.  In time I found my old miniatures, and started working on a couple of them with expectations of SFB being a Christmas holiday project a couple of years back.  Then we had the basement flood, and SFB went into stasis again.

Well, I waited long enough.  I recently pulled out the old bin of badly abused starships and cried for a little bit.  I don't remember why they ended up in the bin; it was a long time ago. But binned they were.

They are now sorted, and on my table awaiting what will be a slow process of refitting for service.

Everything but the Feds.  Bits from three of the FASA ships are located
at the bottom of the second column.  the rest are from Task Force Games
or The Amarillo Design Bureau. 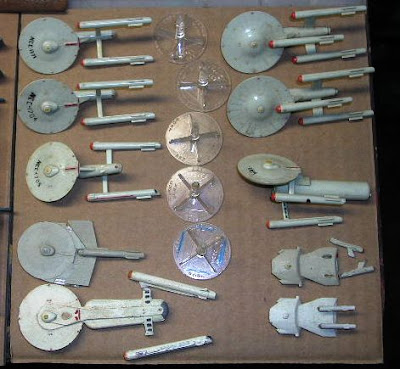 ...and the Feds.  All TFG/ADB models except for the
Larson class destroyer from FASA, second from the
bottom in the first column.
A few models are from FASA ships, but most are the SFB miniatures. I will probably use the Larson class destroyer for the Feds, and if I find the other parts, the Reliant will be an NCL.  The Bird of prey is just too large a model (should I find the missing bits), and the other Klingon cruiser just doesn't fit in.  I think all of the ships are recoverable, except for one of the Romulan F5s, and the one of the Kzinti cruisers.

I also just discovered that the local hobby shop deals with the distributor for ADB, so I plan to order the occasional pack of ships from them.  My hope is to build up enough ships to game smaller battles in miniature (maybe up to 25 ships), and do larger battles with counters.  In time, maybe next year, I want to do the (1st) general war again.
Posted by irishserb at 8:39 AM 2 comments: