My first game of the year was kind of an odd critter.  First, I found myself playing a conflict that I have generally avoided on the table top, the US war in Afghanistan.  Second, the game was played against a veteran of the war in Iraq.  And third, it was his first miniatures game or wargame of any type.  Oh, and as it turned out, we played three games.

The first scenario was fairly simple, if improbable, involving a broke-down Humvee, who's crew tries to hold out until relief can come and whisk them away.  The idea was to keep the scenario small to act as a learning tool for the game process and rules. As it turned out, the newbie caught on quickly, and the scenario played out equally fast.

As the American player had never played or even seen a miniature wargame before, I offered an overview of the rules mechanics for my home-brew rules, and tried to explain the process enough that he felt almost ready to begin.  My rules are very free-flowing, with very short turns.  Basically, I just told him to do what he would do in the real world, and I'd explain how it translated to the table top as we went. 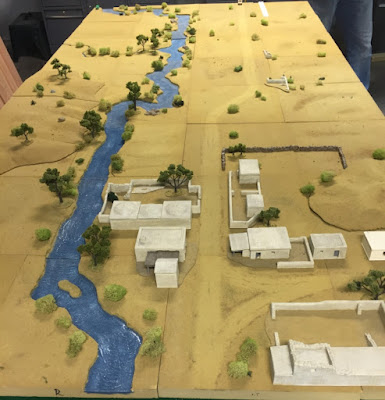 A pre-game view of the table, looking towards the point of US entry.

The American player had a single Humvee and five man crew, that broke down some distance from an Afghan village.  They called in for assistance, and the dice dictated that help would arrive after a "short "time.

I played the Afghan insurgents, which I have to admit felt a little odd, receiving 11 fighters per the die roll. As luck would have it, all with AKs, no MGs or RPGs.

The American player, a veteran of the US Army, and of service in Iraq, fell back on his real world training, setting up a defensive perimeter with his crew, explaining his troops actions, intent and fields of responsibility and fire.

My Afghans took a few turns to respond, moving slowly at first, and then more aggressively.  Rules of engagement dictated that the Americans could only fire if attacked, and I watched the American player tense up, not really knowing what to expect, as the distance closed.

My Afghans finally opened fire, with the Americans returning fire. After a couple of very intense turns,  the Americans took a casualty, but managed to inflict about a half dozen on my Afghans.  Ma Deuce and the M249 did their job, resulting in a morale failure on the Afghan part, and a withdrawal. 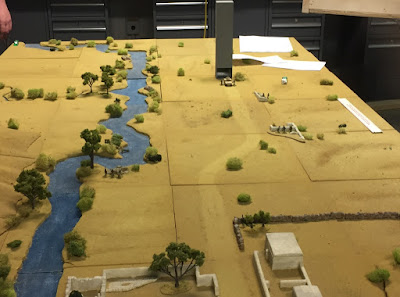 The Humvee broke-down in the road with US troops adjacent and in the nearest
ruined walls.  Afghans are at the bend in the stream (one casualty lays in the stream),
in the ruined walls to the front of the Americans, and near the bend of the wall
nearest the town.

The American player followed his training, and rather than stretching out his force in pursuit of my straggling Afghans, as many gamers would, said that he would secure his perimeter and get attention to his wounded soldier.

The relief would arrive in about two minutes time. The Americans survived, inflicting six KIA at the cost of one moderate wound.  The scenario had been won; he was ready for the next battle.

Despite the small size of the scenario, I really hadn't expected the game to go so fast, and I wasn't sure that he would like it enough to want to game again.
_____

We had a little after-action discussion, and decided to do a little larger action in the second run.  The American player suggested a column of Humvees going to the village and sweep it of unfriendly forces.

The American force consisted of four Humvees with a mix of M2, M240, and Mk19s and their crews.  The Afghans received 21 fighters via the blessing of the holy dice.  I also rolled the dice, 50/50 that the Afghans would ambush the column v. occupy the town.  Ambush it was.

So, Americans entered from the table edge, and quickly sighted part of my Afghan force hiding the stream bed to the American right.  Surprised at the close proximity of the Afghans, the Americans swung their turrets around, and continued to roll at speed through the Ambush zone.  This forced my Afghans to open up early, with my two RPGs luckily hitting the trailing two Humvees.

One RPG hit the turret, taking out the M2 and gunner immediately, the other hit the passenger compartment of the Humvee, causing only one significant wound. The gunner on the Mk19, successfully took out three Afghans right away, including my only MG and one of my RPGs. 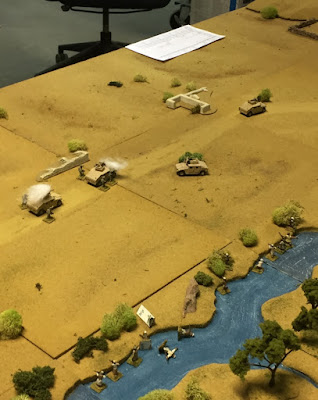 A view of the second battle, on the movement phase of the
turn after firing started.  The two rear Humvees hit, and the
first three Afghan casualties suffered.

Again, the American player relied on his real world experience and training, maneuvering the lead Humvees around in their reaction.

On the next turn the Afghans could cause only a single wound to the Americans, and began taking a beating from the three heavy weapons on the Humvees, and their crews.  After about a minute of intense short range fire, the Americans went from the fear of the unknown, shock of the Ambush, and loss of two Humvees, to hitting 18 of my 21 insurgents despite their cover.  It was wicked. 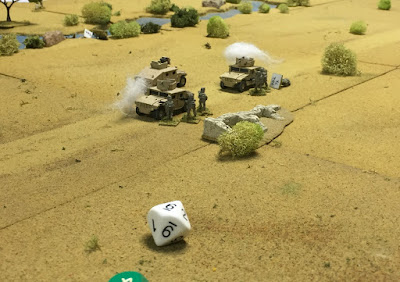 The No.2 Humvee has circled back to help protect casualties,
while the No.1 Humvee is out of view to the left dicing up my Afghans.

The scenario ended with my three survivors leaving their many wounded comrades to bleed out in the stream bed, while the Americans secured their perimeter and tended to their casualties. 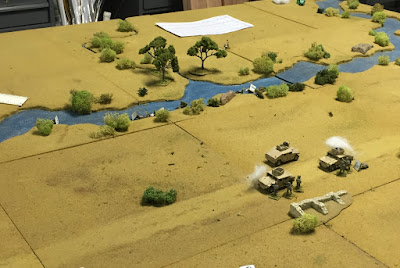 The scenario over, Afghan casualties litter the stream,
while the three survivors run away.

Again, the scenario ended quickly, and after a brief discussion, we decided to play a third game.
____

The third scenario was larger yet, and reversed our rolls somewhat.  I added a little more foliage to the table, and the Americans would provide security in the village for a meeting with some local leaders.  The American player would have three Humvees and crews, and 17 local friendlies.  My attacking force would consist of 46 (per the dice) insurgents, including four RPGs and a couple of MGs. 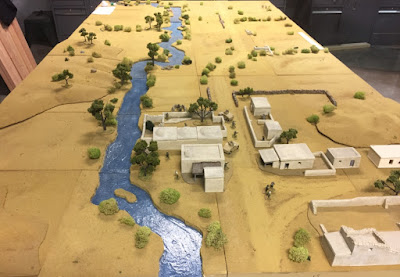 Scenario 3; the same map with a little extra foliage.

The American player established the house in which the meeting would take place, and set up his defenses.  My insurgents advanced from the far edge of the board.   We probably could have just had me set up several moves into the table, but I wanted to give the newbie a chance to go through the sighting process, and gain an appreciation for how the foliage and clutter on the table impacted line of sight, relative to the bird's eye view we have as gamers looking down at the table.  For all of these games, we were using periscopes to establish LOS of for the figs. 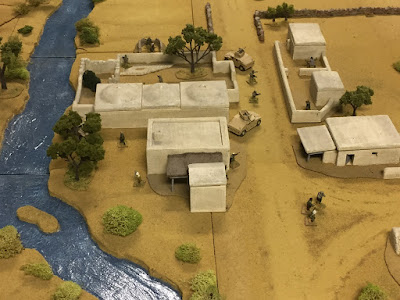 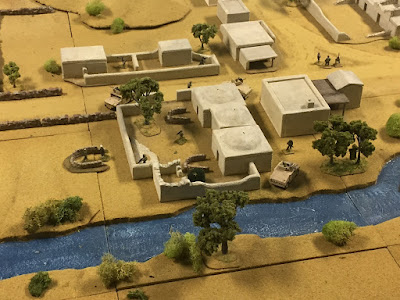 A couple of views showing the initial deployment of friendly
forces protecting the village.

I decided to move most of my force up the Afghan left side, with about a squad worth of fighters advancing along the stream bed.  My hope was to get the large force into the village and overwhelm the enemy with numbers at close range.  The smaller force on the on the right would be used to simply hold American forces in position, and allow me to gain a big numerical advantage on the left. 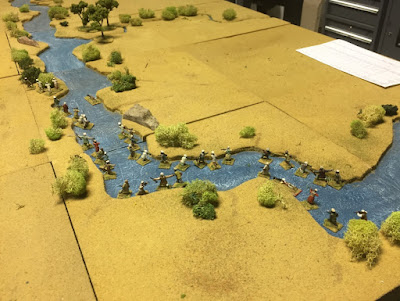 My insurgents advancing in the stream bed.

Ever notice how plans seldom work out as planned?

Slowly, my defenders of the faith advanced on the village.  In time, they were sighted by the locals and the fracas began.  Like the real world, a lot of ammo was expended with few rounds finding their targets.

As the turns passed, more insurgents joined in, and a nasty firefight developed on the left side of the village.   Despite gaining the numerical superiority that I desired, my ineptitude went on display, and his well placed Humvee with M2, and few friendly Afghans took a heavy toll on my force. 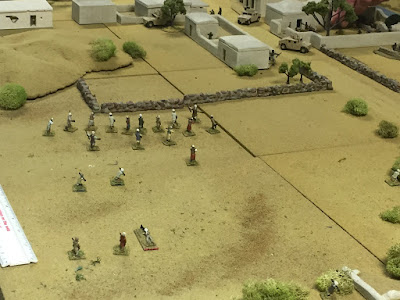 The battle begins to take shape on the Afghan left.

On the right, the plan sort of worked for awhile, with both Afghan insurgent and US/friendly forces either being blind or firing blanks.  A lot of shots resulted in remarkably few casualties, but in time, protected by superior cover, the Allied force started to pick off my guys in the stream bed. 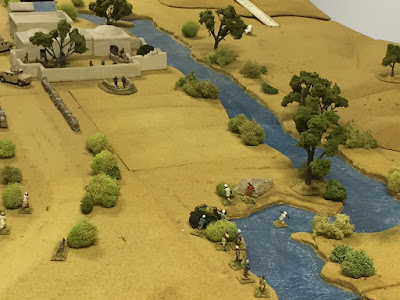 The Afghan group on the right, kept the Allied forces honest for
awhile, but just couldn't hit anything.

After the second game, the American player was quite concerned about RPGs, but the third game showed how fickle they and the dice could be, with my first three, relatively short ranged, high probability shots all missing.

In time the RPGs did take out a couple of the Humvees, and many of the Allied force (though I think only three Americans) fell to fire, but again the insurgents couldn't mass enough fire fast enough, and took a pounding.  Despite good morale/leadership rolls for several turns, the Afghans finally broke and being in such close quarters, my remaining 10 or so leaderless fighters surrendered to the Americans.

I think the allied side had about 13 casualties, pretty heavy at around 40%, but only two confirmed KIA that I can remember. They probably would have been another half 4-6 KIA amongst the friendlies, though we didn't have need to work that out.  The insurgents took 36 casualties, with many having the misfortune of being cut up by .50 cals, or otherwise spending a lot of time bleeding out, before they might have received any help from the Americans.

Expensive maybe, but the Americans and their allies had their third victory of the day, stopping the attack, and successfully protecting the Afghan leaders.
______

So in the end, I got my butt handed to me three times in one day by a newbie, and more importantly, I think the hobby has a new convert.  Sorry the photos don't follow the action better, but I was using my phone, and ended up with a lot of blurry and pixelated photos.
Posted by irishserb at 6:19 PM 8 comments: