So Many Games, So little Time (Or, Me Whining About a Common Problem)

For me, miniatures gaming is a strange creature that brings together a huge range of interests under a single umbrella.  Interests in history, science, art, botany, sociology, etc., etc. all come together in "the game".

My first few years of gaming were limited primarily to World War II and the American Civil War.  The scope of my gaming exploded in my late teens, adding fantasy, science fiction and a range of historical periods.  Though limited by money, I had lots of time and radically managed to expand the scope of my hobby.

A decade later, as I was staring at the onset of my thirties, I realized that I simply wouldn't live long enough to develop all of my gaming interests.  I separated gaming periods into primary and secondary interests.  This resulted in eliminating most periods prior to, and including World War I, and elimination of some redundant scales in primary periods of interest.  More than a dozen periods, and portions of about 30 armies were sold, traded, or given away.

At heart, I am a "tread-head".  Whether it is a fantastical steam driven Victorian land-ship produced by fiction, when history and science could not, or the hard edged sleekness of an M1 bounding through the desert, I embrace the beauty of the beast.  Additionally, I love diversity on the battlefield, so a great variety of troop and equipment types are preferred.

The result is that the scope of my current gaming interests span a very narrow window of history, well, two narrow windows of history and a bit of the future, too.  A portion of the Victorian era from about 1860-1910, most of the age of the tank, about 1936- present, and  a little near future/post-apoc/sci-fi make up the current scope of the hobby for me.

Like many of us, In recent years free time has taken a big hit, as has the pocket book.  This has resulted in my accomplishing very little on the gaming front.  I've gone from gaming weekly with a group to gaming mostly solo a few times per year, from attending a dozen conventions per year to one every other, and from painting or building almost daily to sometimes not finding 20 minutes in a month for the game.

Given my limitations, I find myself making no noticeable  progress on my projects, and during my ailment earlier this year, I even considered leaving the hobby.  Didn't take long to realize that wasn't happening.

So here I am, accomplishing little, even with a greatly reduced range of periods and projects, and realizing that another purge is on the horizon...and it is killing me.

A few dwarfs making their "last stand" on my table.

I tried to do this the same way that I did in my late twenties, just looking at the shelves of stuff in the basement and pulling those things for which I no longer felt the fire.  On their way out are the 15mm ACW, the last of my fantasy figs, and my 28mm ancients.  But that is where it stopped, and that is not nearly enough. 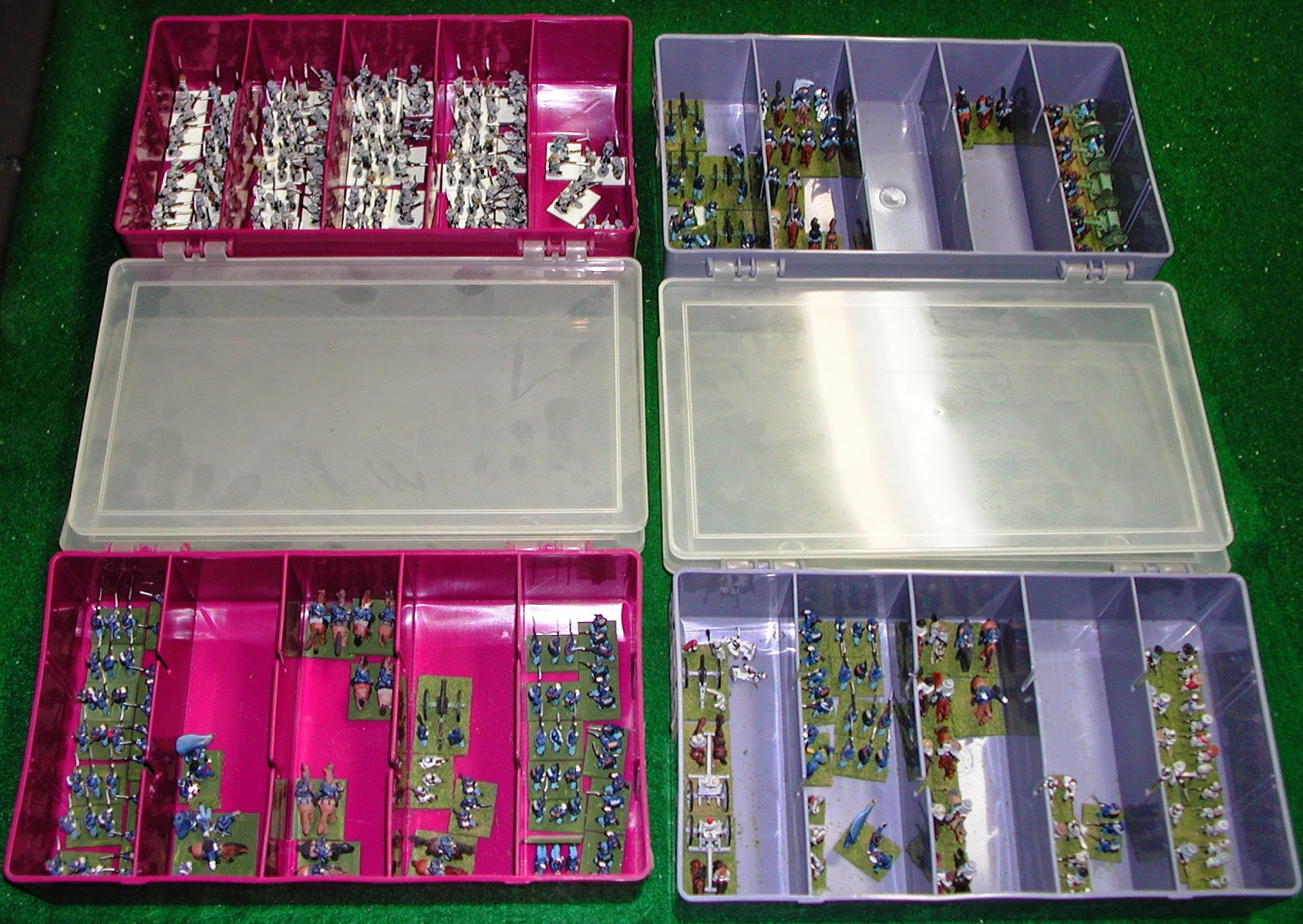 I sat down this morning, put pencil to paper, and was shocked at how huge my narrow scope really is.  After eliminating the periods mentioned above, I am left with eight basic periods/conflicts/subjects.  But, that number "eight" is very misleading.  For example, 15mm World War II is one "period", but it breaks down into early and late war eastern front, 1940 France, late war western front and North Africa.  So, WWII is really five historical sub-periods, demanding three different sets of base terrain and 36 armies (many in two scales). Oh my.

Some periods I do in more than one scale to allow for games of different scope and feel, so some things are counted twice.

The sad part is that I have some significant portion of each interest completed, either troops, miniatures masters, terrain, etc.  And, I still feel the fire for all of it. 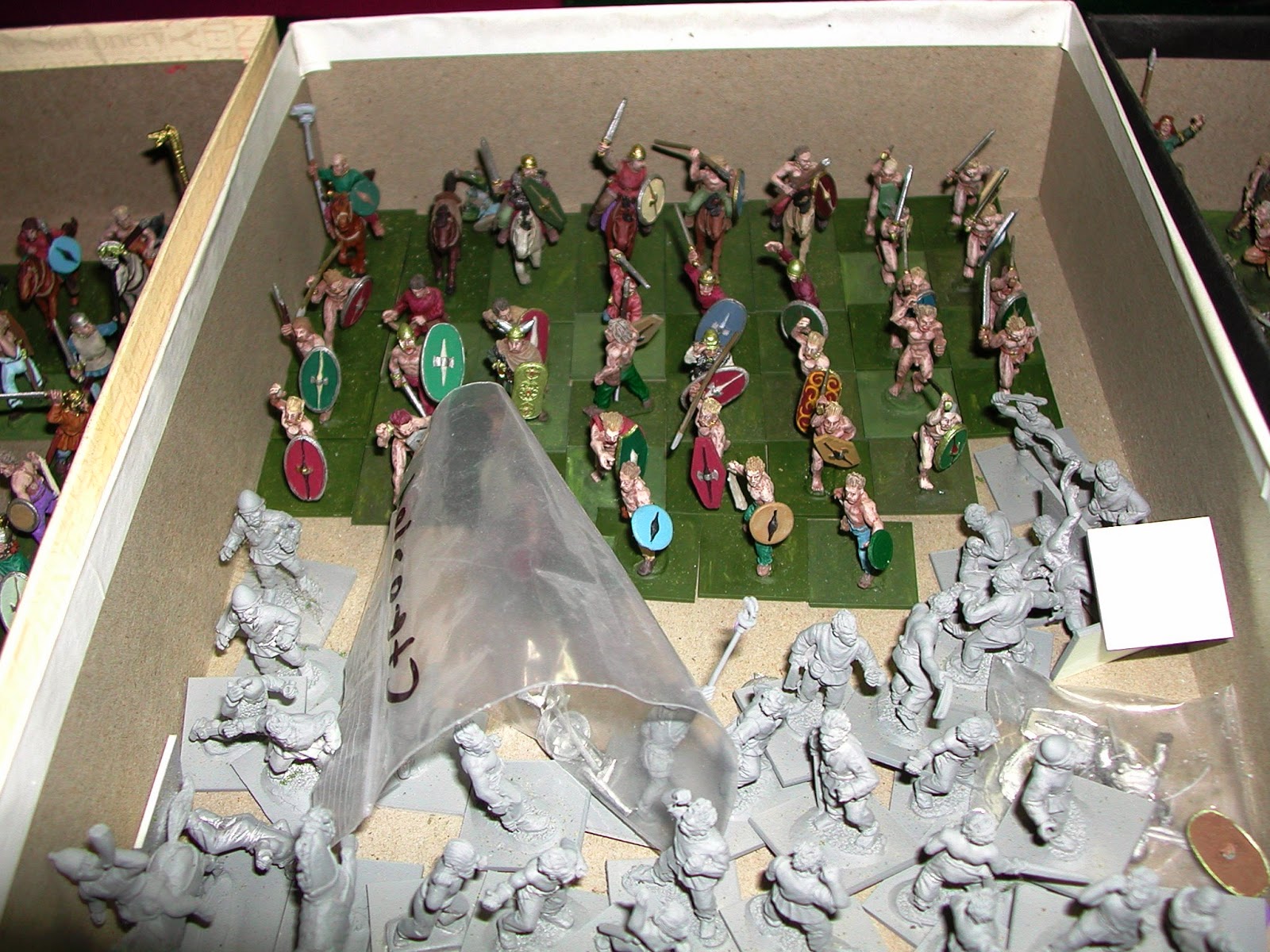 One of several boxes of 28mm Celts.

I ran the idea past my wife of her getting two full times jobs, so that I could stay home and work on my hobbies all of the time.  When I regained consciousness, she assured me, that my idea was not a solution to my problem.

I guess I need to isolate my real core interests even further, identify which subjects require the most work with the least utility, and continue chopping.  This would be so much easier if I had just been born rich and immortal. Gotta go, much to do. 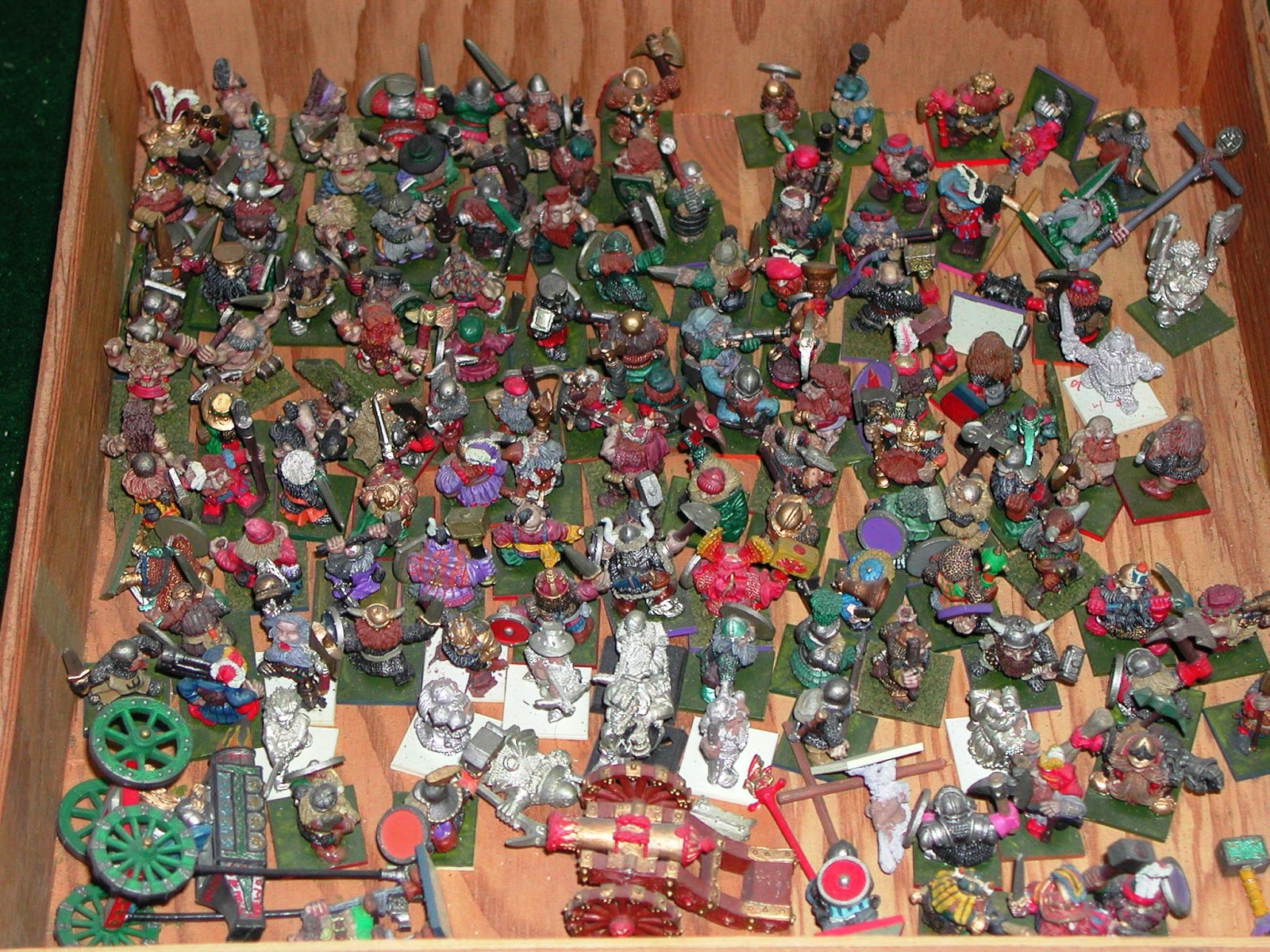 More dwarfs waiting to be imprisoned in shipping boxes.

* Yes, I play Star Fleet Battles (SFB), the First boxed version circa 1981 with the three soft-pack expansions.
Posted by irishserb at 8:29 AM No comments:

AAR12: Beating Around the Bush (African Imagi-Nations at War)

Current Situation in the Mugabia-Uwanda War: All of Mugabia's recent advances on the ground and in the air have been stopped cold by Uwanda's armed forces.  This has resulted in some loss of confidence in their leader by the military and population of Mugabia and the ULF (Uwandan Liberation Front), a rebel force fighting for independence of traditional Pettu tribal territory from Uwanda.  Uwanda's leadership, apparently surprised at their recent string of successes, seems unprepared to take the initiative.

Despite President Upepomfuko's effort, news of the setbacks quickly reached the people of Mugabia.  His enemies postured to use the losses against the president, as many hoped that his hold on the country was weakening.  Despite some minor outcry, Upepomfuko still firmly grasped the throat of "his" nation.

By the time word had reached the masses, the weakness in the president's staff had already been purged.   Chief of the army (the president's brother) had been fired, the minister of defense had a large hole in his forehead, and the Air Force Chief had moved into his new single room apartment with barred door and windows.

The president had a new plan that included lobbying the Soviets for better equipment, pressing the Cubans for more training, and instigating the ULF to step up guerrilla warfare to buy time.

While the dance with the Soviets and Cubans began, the ULF sent teams into Uwanda to spread chaos.  Those in Pettu territory loyal to the central government were harassed.  Livestock was stolen or killed, people beaten, and homes burned.

With the army deployed along the border, the national police took up much of the response to the ULF mischief.  The most active area was to the south around objective A55, resulting in police frequently patrolling the roads between the villages. 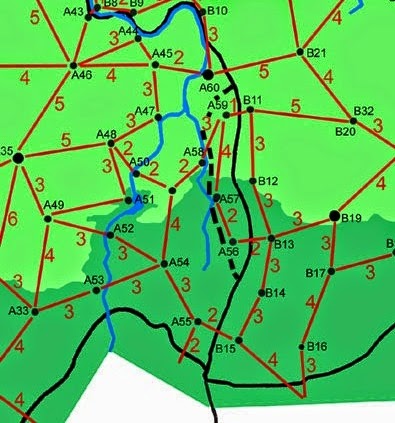 Objective A55 is located near the bottom center of the map.

On most days, patrols yielded only dusty police, as the ULF forces always seemed to melt away.  Today wasn't one of those days.

A small group of ULF men moved through the countryside with supplies for the local ULF fighters.  As it turned out, moving unseen across the border and into Uwanda, proved easier than finding the local ULF contingent.

As Wakili lead his men and supplies through the bush, he thought to himself, "Two days late!  When I find them, I'm don't know whether to supply them or shoot them.  We could better serve the cause, than by walking endlessly, looking for those lost among the trees."

Finally, four of the local ULF men were seen walking in the distance, making their way through the scrub. At about the time Wakili saw them, so did somebody else.

Two Uwandan carriers head west on the road toward
objective A55. They would be the two little things that look
pretty much like bushes in the road to the left.

Though nearly antiques, the Uwandan National Police still operated a number of old Universal Carriers.  The old armored carrier rumbled down the dirt path that nearly passed for a road.  As the carrier approached a farm, some men were seen moving through the brush.

Oman was tired of this task, seemingly searching for that which could not be found.  The men in the bush were probably nobody of interest, but questioning them would offer a few moments of distraction.  Oman shouted to his driver, "Turn right! There! See them?  Go! Go!" 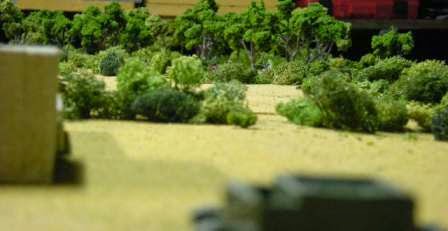 Well, Oman saw them, but I can't make out the men in the
bushes nearest the trees.

As the carrier bounded through the some bushes and churned up a farm field, one of the men in the distance took note, and then the men began to run. 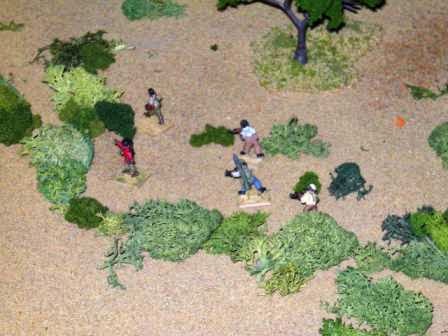 A captivating photo of men running.  See? Oman
did spot dudes in the distance.
Wakli's men watched as their contact was spotted and pursued by the little armored carriers.  Unable to assist, his men took up positions, should they be spotted.

As the men ran to the trees, the carriers began to overtake them.  The policemen disembarked the carriers as they reached the trees, and advanced cautiously on foot, as they had now lost sight of the men. 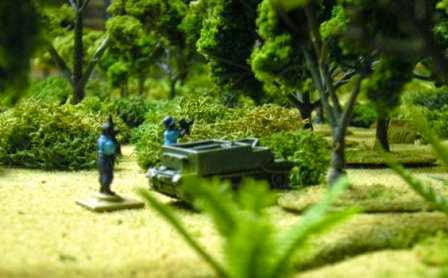 Oman and a subordinate advance into the trees.

After a moment, one of the men hiding in the bushes opened fire on the police, wounding one of them.  The police returned fire, wounding the two closest ULF men.  The police took the two wounded men prisoner, but the others slipped away. 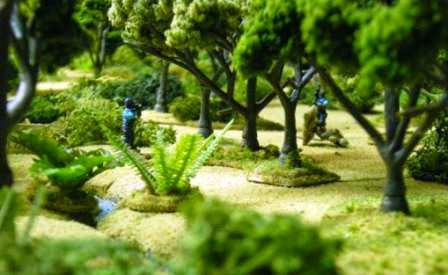 Eventually, Wakili found the now leaderless survivors.  He and his men joined with the local ULF group, while two men were sent back to give word that he would take over here as leader.

Wakili settled in as local commander, discovering that he had nearly 50 men at his disposal.  As he began to imagine the number of wounds that he might inflict upon the beast, he could not help but smile to himself.


Most of the potential for this scenario was undone by the dice before the game started (guess my scenario generator  needs a little tweaking).  Between the separation of the ULF force and the crazy sighting roll for the Uwandan police, the game resulting in a brief chase and the equivalent of about 15 seconds of shooting.  If nothing else, it did help set up the next couple scenarios, which will be a little more substantial.
Posted by irishserb at 9:49 AM 3 comments:

A Little Rambling About Irishserb's Miniatures

I've partially got my stuff together again, so I have resumed selling my 15mm Miniatures.  Unfortunately, both of my AAV7 molds tore, so I do not currently have that model available, and probably won't until around the end of May.

I am having problems getting a useful turret mold for the M60A2, and may have to modify the turret before I am able to list it.

Sometime last year, the mold material that I used for many years was chemically changed, resulting in much shorter mold life for new molds.  I have been experimenting with replacement materials, but have not found anything that performs like the old stuff.  This process will continue, but at some point, there will likely be some sort of price increase, though I'm not there yet.  In the mean time, it means that I spend almost twice as much time making molds as I use to spend, and am a little slower at getting castings made and shipped out.

As a result of my Christmas time luck, I lost my "build table" and the section of my basement that it occupied.  This means that I don't currently have a space dedicated to working on new models and as a result, no timeline for any new items.

While most of this sounds bad, in the last three weeks, I have done a lot to un-bury myself, have got most of the casting side of things going again, actually ran a game (my first in about a year), and am looking forward to adding new models to my collection and thus my website.  For the first time in quite awhile, I am very upbeat about miniatures.