It wasn't supposed to be this challenging, just the next battle in my modern imagi-nation campaign.   A 15mm rescue mission that requires a hospital be built, and the next confrontation along the edge of disputed territory needing a few more tanks, I thought. Not too bad.

Some dice were rolled, and the "fate tables" dictated the path, that of total war.  Total what??  This started out as a skirmish campaign.  Oh well.  Plans were made, some more die rolls, and everything solidified.  I  need to build some more buildings, like 20 of them,  a few businesses and a bunch of houses; some fortifications, bunkers, and lots of barbed wire; still needed the hospital, but that wouldn't be the first battle, as I had expected.  Nothing is as I expected.

The ground war now starts with an air war, but I didn't plan for an air war.  So I had to order some airplanes, decided to go 6mm and found most of what I needed.  But now I have to scratch out a couple of masters, and cast a few planes, G91Rs and Strikemasters anyone?  And my air combat rules really didn't do the game justice, so I looked for a more detailed set, only to find that no such set was currently available, so now I'm creating a set of air combat rules to interface into my imagi-nation campaign.  Did you know that GHs23 spews out like 36 pounds of bullets per second?? Holy crap!! 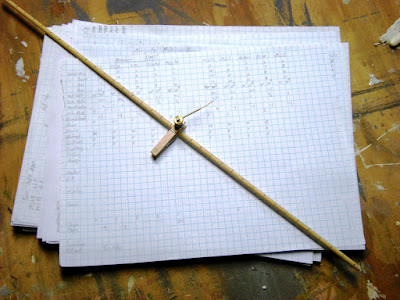 The current state of my air combat rules,
30 pages of notes and a partial airplane stand.
On the ground, the required forces quickly became larger than I had ever intended or expected.  So I need to add more tanks, some tank destroyers, more air defense, and at least another company of Mugabian infantry, and a few more 1/100 airplanes for ground support. Battles are getting big, probably should do some in 6mm, which would require new terrain, buildings, emplacements, infantry...  6mm?? Dude, don't even go there!

And I need trucks, a bunch of trucks, like 30 trucks, should probably master those and cast them, but I have no time.  Work got stupid busy, and instead of running sprints at my painting table, I'm taking baby steps.  I have packages that came in three weeks ago, that I haven't even looked at, and somewhere in the midst of my African imagi-nation craziness should be a batch of 28mm grey aliens...  Do what? 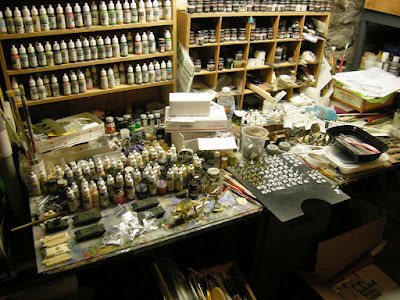 My painting table, after cleaning it off.  Vickers MkIII  front left with a couple of T34s, some 1/300 Vautours and buccaneers in front of that, Mugabian infantry based on the tray to right, packages behind, clutter everywhere.

Time to take a deep breath and try to get a grip.  Along comes the weekend, I think I'm gonna make some progress, take a day to make molds and cast a little, then take a day to build, paint, maybe even test some rules.  Then a tire breaks off one car, that car hates me, and the starter dies on the other, those cars have always hated me.  They broke on purpose!   It just never ends.  Maybe next weekend?
Posted by irishserb at 6:14 AM 3 comments:

Back in January, I made preparations for the next phase of the Uwanad/Mugabia War, which included planning, ordering more miniatures and making new terrain.  Unfortunately life interfered as it sometimes does, and set me back six months.  But I'm finally getting around to the next chapter in the story, so here is the current situation...


The president of Uwanda peered out the window, taking in the bright sunshine glistening off of the tree tops.  "A shame that such a magnificent day had to be scarred with preparations for war", he thought.  He turned to face his staff, "Gentlemen, this is how we're going to go about solving our Mugabian problem once and for all..."

Since the ULF had increased its attacks, Uwanda had greatly increased the frequency of troop movements, using methods that had countered the attacks, allowing the ULF little success.  Though expensive, these movements also helped to hide the build up of troops and equipment nearer to the border.

The plan involved a two pronged attack, with one force advancing roughly at the center of the border, just north of the Mugabian occupation, and the other force attacking from a point farther north, where no action had yet been taken.  This northern attack was actually the primary force, with most of the central force being something of a feint, intending mostly to hold Mugabian forces in place.

Eventually, it was hoped that some of the central force would mate up with the northern force in a run for the Mugabian capitol.  The belief among Uwandan leadership was that the Mugabians would not expect the scope of the attack, nor the northern attacking force at all.  And that due to the nature of the Mugabian command structure, that the Mugabian forces could not respond quickly enough, and would be outrun in a race to the capitol.

The Mugabian president was as concerned with policing his own leadership, as he was the Uwandan border.  He believed that Uwanda would avoid all out war at almost any cost.  Their effort in the south had failed terribly, despite Uwandans remaining on Mugabian soil, and the President was convinced that his forces were quite capable of keeping the situation under control.

The Cubans had helped prepare the Mugabians to be a better fighting force, and the Soviets, while hesitant to put troops in Mugabia, offered equipment and intelligence, though sometimes neither was used properly.

The president stood, viewing the satellite photos of Uwandan forces with the Soviet advisers, yet he did not see the what the Soviets saw.  "Mr. President, Uwanda will invade...here, here, and especially here...everywhere!  You are making a terrible mistake; it is in both our interests that this not happen."

"My dear comrade, please forgive me, if I do not seem so convinced as you.  This is not NATO, this is Uwanda, and we have already seen what they can, and cannot do.  I have spent a lifetime learning about my neighbors, you have barely spent two years.  Despite your resources, I think that I might still know them better than you."

In the skies along the border, jets took part in a delicate dance, alternately lunging forward, and dodging the occasional shot.  After earlier exchanges and losses, each side was hesitant to be the next to roar.  But when the time came, even if only a cub, the Mugabian lion did roar, and the Uwandan fox ran, whimpering from its wounds.