Throughout the year, I've slowly been working on additional 15mm vehicles for my Modern Africa project, a war between two fictional countries; Mugabia and Uwanda. So, I thought I'd share a few pics and a couple of thoughts.

I finally finished a couple of Peugeot P-4s. Unfortunately my French are quite neglected and mostly still have to walk around the planet.

... are some civilian vehicles from HowardModels.com:

Howard Models is an architectural model company that offers a line of metal vehicles in several scales. Sometime back I picked up a set of their 1:96 scale models for use with 15mm (1/100ish) gaming.

They consist of Dodge and/or Chrysler products and include (I think) a Neon, an Intrepid, a Durango SUV, a Pick-up truck, and Caravan minivan (not shown). The red pick-up in the photo is the Peter Pig pick-up from their Modern African/AK-47 line. The M114 Humvee and P-4 are my own models in 1/100, and are shown (along with the Peter Pig pick-up) to give some sense of scale.

The models are cleanly cast and nicely detailed, though some of the details don't stand out quite as distinctly as appears in the photo on the Howard Models site. The bed of pick-up is not really detailed, but otherwise I can't complain (and even that isn't really a complaint).


Lastly...
...is a comparison (mostly for scale) between Quality Castings/19th Century Miniatures/Battle Honours/OldGlory15s.com (that's all one company by many names) and QRF BTR60PBs.

The Quality Castings model is on the left in the photo above, the QRF model to the right. I originally bought the Quality Castings BTR-60PBs for my Soviet/Afghan War games a few years back, mostly because at that time they were a couple of dollars per vehicle cheaper than QRF, and I thought that it was a decent looking miniature. More recently, I purchased some QRF BTR-60s as the pricing situation has now reversed.

The old Quality Castings line is identified as 15mm, but was originally also identified as being 1/108 scale. As a result, QC miniatures tend to be a little smaller than some of the other 15mm lines, but also are not completely true to scale, often being a little larger than 1/108th (though still smaller than other brands).

A rear view with the QRF model on the left, and QC on the right. Both models are nicely detailed with the QC model details standing out a little more. The most noticeable differences between the models are the turret profile (QRF is shorter), the length of the hull nose (shorter on the QC model), and hull rear end (longer on the QC model). After comparing to technical drawings and measuring some angles, it turns out that the QRF turret and QC hull are the most accurately shaped.

Both models are nicely detailed, with the QRF model building up more easily, and the QC model being more cleanly cast. Both have detail variations from my drawings and photos, but I think some of that is due to actual Soviet production variations as much as anything else. 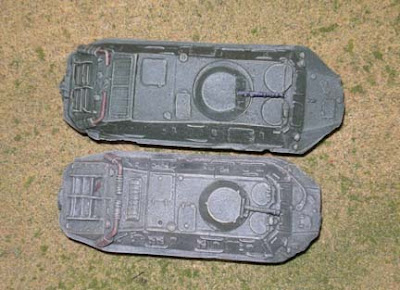 The overhead view shows the scale difference between the two models, with the QRF (top) model clearly being larger. Both models look fine on the table top next to 15mm infantry figures, though I would generally not mix the same vehicle type from different manufacturers. Since the issue of QC scale comes up from time to time in various discussions, and I had both models, I thought that I'd offer the visual comparison.


Posted by irishserb at 3:09 AM No comments:

PBRs for the Bassac

Earlier this year I received two Britannia 20mm PBRs for my Vietnam project. The hull and canopy are cast in a tan resin that is very hard and quite brittle; the other parts and crew are cast in metal. The crew consists of a partial fig in the twin .50cal turret, and three standing figs; the boat commander, an M60 gunner, and the rear .50cal gunner. The castings are very clean, and the crew are quite nice.

The hull comes with a wake cast as an integral part of the hull, which looks nice. After some consideration, I decided to remove the wake with a Dremel, as I plan to scratch-build other riverine boats and craft, which will not have the wake cast into them. Unfortunately, I did not take a pic of the model before removing the wake, but a photo can be seen on Britannia's site showing a model with the wake.

http://www.britanniainkerman.com/brit/gallery/vietnam/image14.html
One of the canopies was broken in shipping, so I decided to make a replacement out of sheet styrene. After roughing out the first one, I decided to make a second so that the two models would match. I used Bondo brand automotive glazing putty to smooth out the hulls and to add texture to the canopies. The putty is the orange stuff in the photo below. 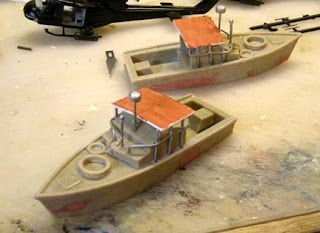 I then sanded and primed the models and located the crew positions on the model.

At this point I noticed that the model was different from the boats depicted in my source materials. On the model, the rear .50cal is mounted on what appears to be an engine cover, and the there is no deck or armor for the M60 mounts.

The actual PBR Mk2 has a slightly raised deck with two armor plates and mounting points on each for an M60 GPMG, and the .50 cal is mounted on three legged tripod, there is no boxlike structure located in the rear of the boat.

So I Dremeled out the box under the .50, and built up a deck and armor for the M60 out of sheet styrene as shown below.

Rather than build the tripod, I simply used a piece of styrene tubing for the .50 cal mount, as there is little space int he back of the boat, and I wanted to be able to move the gunner freely to face the enemy. The legs of the tripod would have made this a little harder.

This was the last of my modifications, so I painted the boats, glued the boat commander in place in each boat, but left all of the gunners loose, so that they can be positioned to face the enemy during game play. 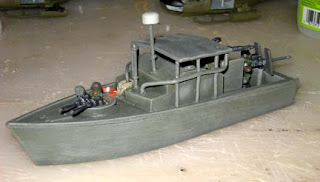 So I'm finally making some progress, my PBRS are ready for the river. Next, I have to finish my Seawolves (which are just about done), and then build some terrain.

I used a number of references including the old Squadron book "Riverine" by Jim Mesko, and photos and information from the following sites: