I recently received a few more models from QRF, primarily a bunch of T64s and an 82mm Vasilek automatic mortar.

I already had three T64As, but ordered seven more to round out a company.  The beautifully painted model on the QRF site looks pretty good, but I figured that I'd share a photo of a bare metal model which is still a pretty good looking model..

I also received my first 2B9 82mm Vasilek 82mm automatic mortar.  I ordered just the one, as the photo on the site looked quite nice, but  I was concerned about the number of parts and how much struggle it would be to assemble.

The model is very nice and finely detailed, and I believe it consists of nine pieces. I wasn't real familiar with the contraption, so I looked up some photos of the it on the net, and it made sense pretty quickly.  I canted the axle backwards a little, which I wouldn't have done, had I not seen pics of the actual weapon.  It also appears that the trails rotate from a horizontal orientation when in tow, to the vertical when deployed (at least on some units), which confused me a little.  Here are a couple of pics of the assembled model,which I hope might be helpful to others. 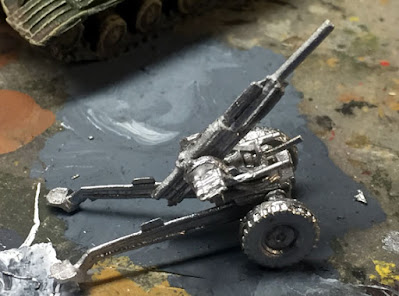 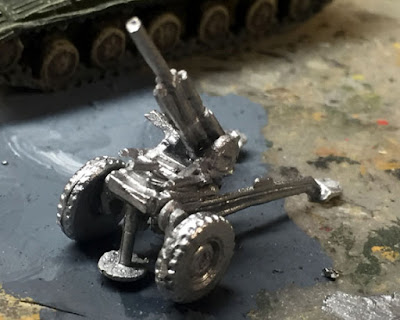 Since it turned out to be pretty easy to assemble, I'm going to order a couple more of them, to give my Soviets something to annoy my Afghans with.

Given that some of my recent orders from other companies during the age of Covid-19 have been rough rides and/or a bit slow, I want to mention that QRF did a really nice job of packing the models, as the postal system positively beat the crap out of the package with no harm coming to the models, and the turn around time was quite short.

Terrain Maps for the Third World War in Germany 1958

When I first started considering playing out battles of the third world war set in 1958 (or there about), one of my first thoughts was that West Germany probably looked a bit different in 1958, than it did in say... 1982.  Where in the heck would I get maps depicting the roads and extent of development around 1958?

After some searching, I discovered that 1:25,000 military maps of Germany, both West and East, were available online from Brigham Young University at: https://lib.byu.edu/collections/german-maps/  You'll have to play around with the interface, but all of the maps are available for download.

These will allow me to make terrain as detailed as I might want or need for my games.  In experimenting with scaling and cropping maps to match my table size in scale, I've come to realize that my generic modular terrain can't replicate the actual German road and terrain network with a high degree of accuracy.  The road networks were simply too dense, and the topography in some areas, too complex.

In the end, I'll probably make a fair number of new terrain panels to replicate places of particular interest, and otherwise just live with some compromises between my existing terrain and reality.

My Painting Table Is Under There Somewhere

Sunday, I finally found some time to get down to the basement to work on some fig.  This is what found waiting for me (well almost). I didn't think to take a photo right away, at this point, I had already spent minutes just to clear a little space to the right so that I had somewhere to work. 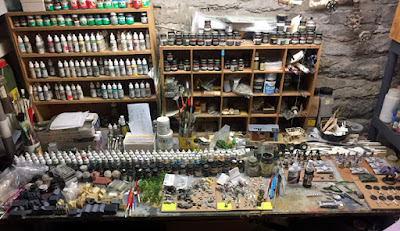 I think I owe my painting table an apology.  This is not the job it applied for.

Despite my day job's attempts to relieve me of  all of my free time, this week I managed to make tremendous progress on the strategic side of my Cold War campaign.  I managed to work out unit values for most 1958 units based on the system presented in the old GDW The Third World War (TTWW) game, which will function as the framework for my campaign.  In the process, I worked the stats out for all four periods in which I hope to game the Cold War, so the later games will come with a little less preparation.

The current plan is to start the campaign on the TTWW map, selecting interesting battles to play in miniature, while playing out other less interesting or repetitive battles with the counters on the boardgame map.

I plan to use old 1950s vintage US Army maps of Germany to layout the tactical situations to set up on my table.  This will involve plotting tactical movement of the units represented on the TTWW map on the US Army maps, and then playing out the miniature battles generated on the Army maps.

Now I'm off to the basement to actually work on some miniatures.  After trying to clean up my game table, my painting table is over-flowing again.

Tribulations of Setting Up the Third World War in 1958

Over the last week, I've been trying to wrap my head around setting up the strategic game for a world war set in the Germanys of 1958, and I've been struggling a bit.  Despite all of my research, there are many holes in my info, and I'm at the point, where I have to bite the bullet, and just make some decisions to move ahead.

One of the things that I'm doing is creating a 1958 version of GDW's The Third World War, which at the moment involves sorting a lot info, filling in gaps, and deciding how far I want to go with board game design (not something that I'm really interested in).

A second issue that I've been addressing is the differences in my alternate history with respect to available forces, resources/technology, and changes to politics.  With the premise being that the US leads an attack on East Germany with intent to unify East and West, and put the USSR in "its place", I constantly struggle with my real world view that NATO never could have pulled this off.

Trying to sell myself on the idea that a more hard-line Soviet leadership could catalyze a more "McCarthian" movement in the US, and that it could get (enough of) its NATO allies to make it happen, has been more problem than expected.  I have to keep reminding myself that it is a fictional game.

While the purpose was to create a framework for a series of linked and interdependent miniatures battles, I keep getting lost in the real world politics of the day (or at least, what little I know of it).  A big "just go with it" is the US convincing West Germany that the only way to avoid a war in the west is to invade the East.

Other issues involve France being concerned enough with the Soviets to draw attention and forces away from their African problem, and then there is the the problem of the UK economically supporting/surviving a war, and so on.  I also struggle badly with the idea that the Netherlands, Belgium and Canada would be willing to get sucked up into the American Red Menace craziness.

Other challenging considerations include having understanding of the Soviet limitations of the day.  They don't have many nukes, or at least not a lot of good ways to deliver them.  Really just a handful of Scuds, and bombers that would take a pounding.  Oh some would get through, and each one that did would have a tremendous "impact', but there probably would not be a lot of repeat offenders.  And though I really want to play a conventional war, I have to accept that the "Atomic Battlefield" was the American plan of the day.

So right now, I've mostly distracted myself with deciding what forces are available, inventing some units to fill in my informational gaps, and creating 1958 vintage counters for all of the forces involved.

While working on all of this, in the back of my mind is the thought that it could all go wrong (like any version of a third world war could be things going right?), and instead of months of Cold War miniatures games, I find that the game ends in a couple of days with nuclear apocalypse, or that Pentomic divisions were such a bad idea that the Soviets are in Normandy faster than I can say, "Red Menace".

Well, the good news is that my blog will survive. the bad news is that I now have to use two computers to compose a single post.  I love progress.

Anyway, here are a few pics of two 28mm buildings that I've been working on over the last three weeks.  The first is an old adobe house, which still needs a layer of dust, but is table ready otherwise. 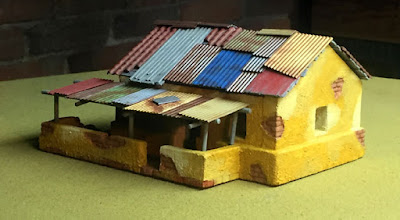 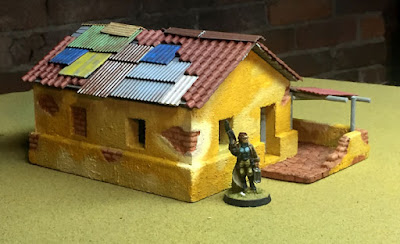 The second is a sort of shanty that I made good progress on earlier today.  The roof still needs painted and I need to add a couple of tarps to the roof, but it is coming along. 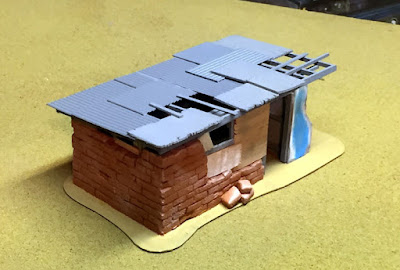 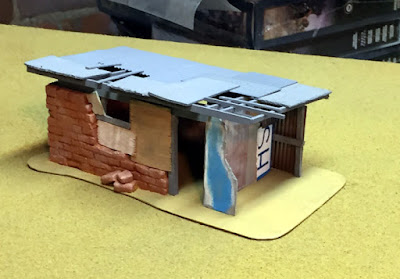 These are the first two buildings for a town that will serve as a sort of center of the action for many of my scenarios.  I hope to keep plopping out one of these buildings every couple of weeks through December.
Posted by irishserb at 6:23 PM 2 comments: