I received a couple 1/72 scale Academy M35 2.5 ton truck kits a couple of years ago, and only recently finished them (well, finished enough to game with).  And thought I'd offer some comparison pics with the Britannia 20mm M35 that I painted some time back.

The Britannia model is a solid model with a removable rear canvas, built for gaming.  I finished mine in OD and painted the canvas in some horrible green that suggests that I might have been drinking my paint water at the time.

The Academy model is a finely detailed plastic model kit with quite a number of finely detailed fiddly pieces.  It builds up into a fine looking model, though may be a bit too delicate to handle  for some gamers.  It comes with a canvas top for the cab (which I did not use), but does not come with the canvas for the cargo bed.

The Academy kit is a little longer than the Britannia model and the wheels look noticeably larger, but  either is obviously recognizable as an M35.  Here are the pics:

The Britannia model is to the left in the photos above, the Academy model to the right. 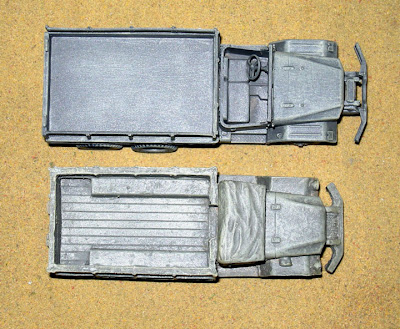 The Academy model is at the top in the photo above.

The Britannia model on the right with canvas cover on the cargo bed.

The academy kit comes with benches for the cargo bed, but I did not assemble them.  They are very fiddly by gamer standards. I also left the rear view mirrors off and removed the exhaust stacks from the right front fender during painting, as these parts had no hope of surviving my handling on the table top.
Posted by irishserb at 4:39 AM 3 comments:

AAR10: Air War Over Mugabia (African imagi-nations at it again)

While Mugabia's three pronged advance was taking place on the ground, its air force took to the air.  For the first time, orders dictated that the troops on the ground would officially be supported by their comrades in the air.

Uwanda's air force had already offered a little support to ground units, but Mugabia would be the first to  make a major strike in enemy territory.  With the Uwandan  airbase at objective A-60 so close to the border, it was an obvious target, and soon would be a smoking wreck after Mugabian Vautours got done with it.  They would be escorted by a few Migs to fend off any Uwandan interceptors that might get off of the ground.  Additionally, Mugabia would send fighters to support the operations at objectives 55 and 58.

It was known in Uwanda that Mugabia troops were advancing, so strikes were ordered at the advancing troops and at airbases most likely to support these operations at objectives B-23 and B-19. 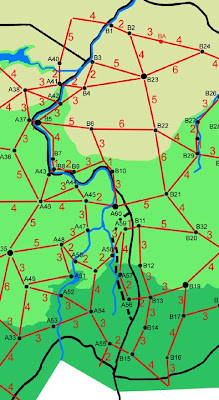 In the map above, Uwanda is located to the left of the black border line, and Mugabia to the right.

Timing is everything, and as neither nation was able to meet their schedules, the result was  a series of strangely lopsided battles:

Though the attack on the base at objective B-23 took off first, the air battle there, took place last, with the most southerly encounters taking place first. Somewhere east of objective A-55, six Uwandan F-5s discovered four Mig17s.  The F-5s had a distinct advantage as they carried some of the very few AIM-9L air to air missiles possessed by Uwanda.  In just over a minute, all four Migs were hit.  Though they were all claimed as killed, one did manage to limp home to fight another day.  Other Migs directed to intercept desperately searched for the Uwandan intruders, but could not find them. 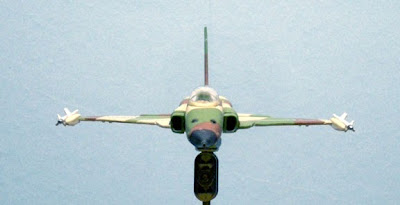 The tip of the spear, a Uwandan F-5E.
Uwanda operates a small number of F-5Es as well as F-5As

A flight of four Strikemasters were originally to hit the base at B-19, but were re-directed to support troops fighting to hold onto objective A-55.  After some confusion, they did eventually arrive at the end of the battle, making a decisive, if brief appearance.

Slightly north of the dogfight above, a pair of F-5s found two Mig21s with similar results.  Both Migs were quickly lost, demonstrating the impact of the more austere training of the Mugabian pilots. 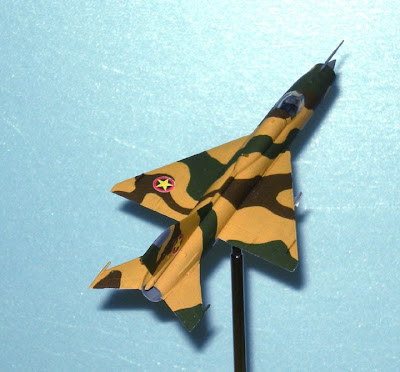 As the primary strike force for the base at B-19 moved east of objective 58, their fighter escort of two F-5s were intercepted by a pair of Mig21s.  The Migs quickly discovered that their AA-2s were maybe not as effective as claimed, and after a couple minutes of churning dogfight, found themselves on the losing end of the exchange.  With the F5s having expended most of their ammo and missiles, the Magisters of the strike group were redirected to destroy Mugabian artillery that was pounding friendly forces at objective 58.  For now, the base at B-19 would remain undamaged. 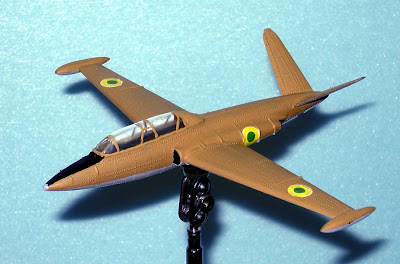 South of base B-23, six Mugabian Mig 17s intercepted the Uwandan strike group, consisting of two F5s, three G91s (which were flying essentially as fighter excort), and six strikemasters.

As he turned to make his third pass, Amri thought to himself, "These western trained pilots are no good.  They do not see the battle, as I see the battle."  Already with two kills, he fired another burst and a Uwandan Strikemaster became a cloud of debris.  "Three kills! And now for another!", but number four would not come, as his last few rounds only damaged the next Strikemaster.  Still, Amri would return home out of ammo, and a hero.

Fate would finally smile upon Mugabia's air forces, the Migs got jump on the two F5s escorting the group, and only 3 damaged Strikemasters would return to base.  Uwanda managed to shoot down two of the Migs, and damage a third, but the surviving Strikemasters made it home only because the Migs ran out of ammo. 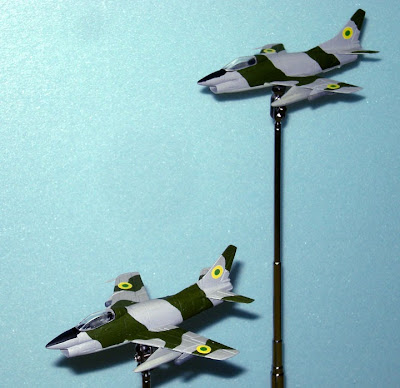 The last air combat of the day involved the Uwandan group sent to support the troops at objective A-60, which intercepted the Mugabian strike group targeting the airbase on the west side of the city.  Mugabian Mig21s, escorting three Vautours, fell victim to Uwandan F-5s. One Mig was damaged , another killed, as the group turned tail and ran for home. 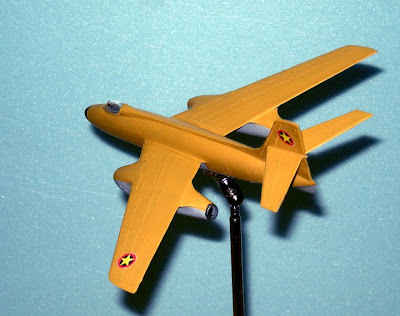 Without Mig protection, and little hope of success,
the Vautours turned for home.

With the F5s having cleared the area of Migs, the G91s were free to attack Mugabian forces advancing on objective A-60.

The battles of the first day of air war, resulted in 8 of 31 Uwandan aircraft being lost and 10 of  19 Mugabian aircraft being shot down.  A number of damaged aircraft returned to their respective bases, but would take time to repair.

The day would have been a total disaster for Mugabia, had it not been for the group of Mig17s out of base B-23.  President Upepomfuko realized, as did his Uwandan counterpart, that protracted air war was not affordable, and that this war would have to be won on the ground.  Uwanda was nearly out of their advanced Sidewinder missiles, and the F5's success could not hope to continue.  Mugabia out-numbered Uwanda in aircraft, so the situation could get ugly quickly. 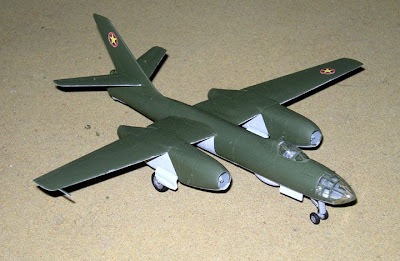 The battles were fought using very simple home-brew rules, that I wrote many years ago, designed primarily to support micro-armor battles. The results of these first air battles were quite surprising, with Mig21s having particularly bad die rolls resulting in disproportionate losses to the F5s.  Then the devastating success of the one Group of Mig17s balancing the numbers a little.

Uwanda's F5 success is unlikely to continue as they soon lose the all aspect capability of the AIM9L (and probably the crazy good die rolls too), and will face Mugabia's Mig21s and Mig17s with AIM9Bs in the future.  Thus, I expect future battles to be much more balanced, and maybe a little less terminal.


Posted by irishserb at 6:53 AM No comments: