An "Irishserb's Miniatures" for sale update

Some of you know that I sometimes offer 15mm (and a few other) miniatures for sale,  and for several months now, that I have not been selling due to time limitations and a chemical change in the mold material that I used for many years.

Irishserb's Minaitures is very much a side thing impinged upon by a day job, and the chemical change in the mold material that resulted in a tremendously shorter mold life.  Particularly over the last three years, my time investment in producing miniatures has resulted in the near abandonment of my hobby.  I've even considered whether it is worth while to continue as a participant in the hobby at times.  I do love the hobby, and for me, it is an outlet for stress that keeps the world (or at least me) a little bit safer and healthier.

About six months ago, I decided to dedicate a certain amount of free time to participating in the hobby first, and then putting time into Irishserb's Miniatures.  This has resulted in me sort of rediscovering the hobby, feeling better about life, and still given me time to experiment with possible replacement for mold materials.

Thus far, the search has been futile with candidate materials yielding some new issue that either requires disproportionate time or cost to overcome.  I will continue to search for a new material, but in the mean time, am going to start making new production molds with the "new and improved version of the old material.  This will yield short production runs, with significantly more time and cost invested in mold making, and resulting in less inventory for the investment.

The current plan is to spend a month or so producing molds and inventory, then opening shop and filling orders until the inventory is gone.  And then repeating the cycle as needed.  I will update my site and post a notice here, when I open shop again.  I expect that will happen in early February.

And the news that nobody wants to hear.  I will have some sort of price increase, which I haven't done since 2009.  I'm not sure how it will manifest, but will offset some portion of my increased material cost.  The form of the increase will be decided base on cost analysis of miniature production over the next month.  Don't panic, as a gamer I like cheap miniatures.  I expect others to do the same, and will keep the increase as low as possible.

Lastly, I discovered that I have missed answering a bunch of miniatures related (and other) e-mails over the last four or so months.  I managed to not check my spam filter for about that long, and make the discovery this past week.  I am working to catch up on those, and am sorry for poor performance.

That is the latest news for now.  Hope everybody had a great Christmas, and has a great holiday season.

Last Visit to the Blockhouse

Though it has taken a month, I've made a lot of progress on my 28mm post-apoc blockhouse. I've finished several pieces of the clutter that sits around it.  There are some other items not pictured yet, but I will share those, when the accompanying encampment is done.  Here are some pics of what I've got: 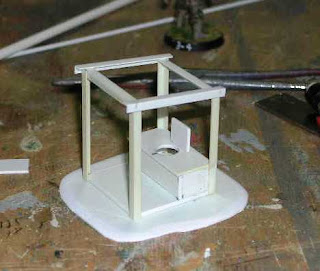 An early shot of the outhouse under construction. 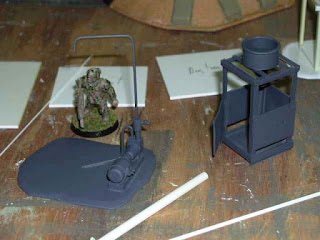 The outdoor shower  before painting. 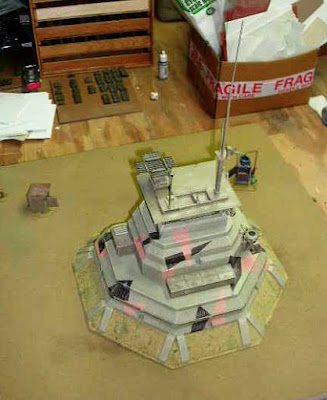 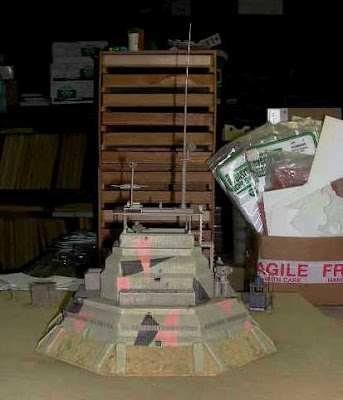 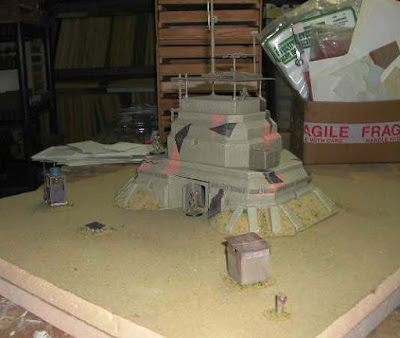 This view shows the shower, fire pit, outhouse, and vent. 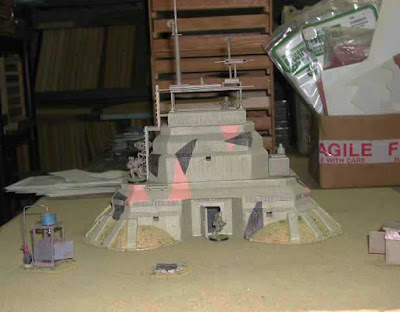 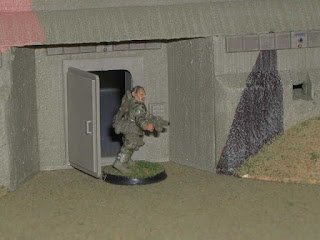 A close-up of the main entrance. 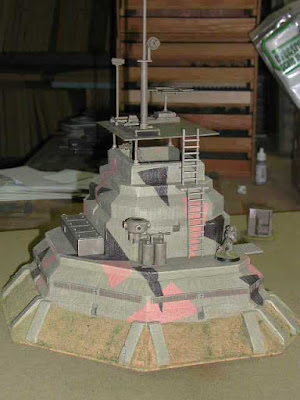 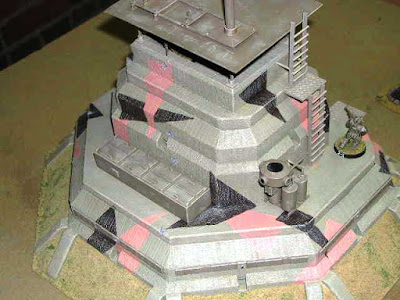 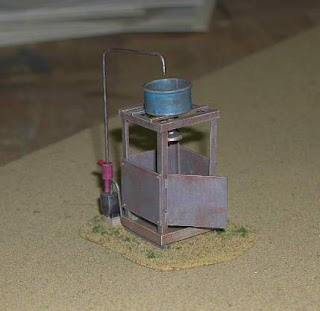 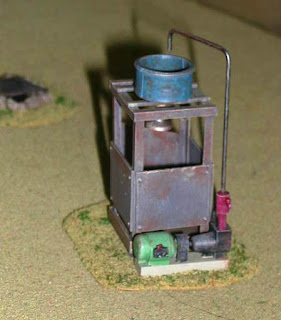 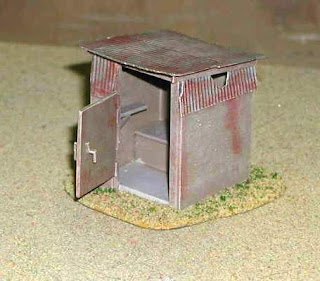 The blockhouse is an outpost for the most technologically advance and resource rich faction in my post-apoc world.  Despite this, the resources at the blockhouse are limited, so the troops stationed there make the most of what they can get their hands on.

During the rare rains, water is collected for the shower.  This allows the troops to get showers more than once every two weeks, without wasting the facility's water ration.  Likewise, the outhouse further reduces the demands on the blockhouse.

I'll share photos of more of these types of items, when I get the encampment done.  But that is a little later on.

The ork trucks are next...