In November, I got the grand idea of rounding out some infantry units for   my modern armies, so that I could finally play some of the games that I am forever putting off.  Additionally, I figured this would be a good way to come up with some suggestions, when my wife asked about what I might like for Christmas.


November turned into December, the holidays came to pass, rounding out some of my modern armies turned into inventorying all of my moderns, and then my World War II armies as well.  And since the holidays were happening, progress was slow and extremely interrupted.  So here I am 10 weeks later, and my table is covered with 3757 15mm modern and WWII infantry, and I am nowhere near filling out the gaps in my units. And since I have nothing better to offer, here they are, my 15mm minions: 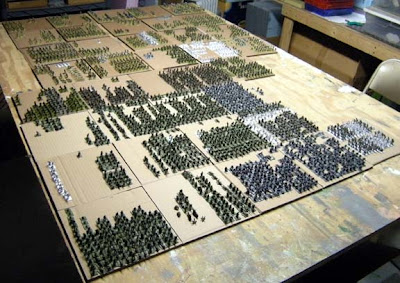 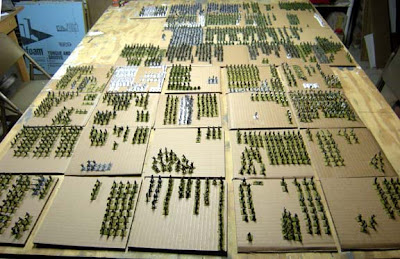 Of the 3757 figs, about 3300 are painted  representing at least 24 different
armies with figs from seven manufacturers.

With Christmas came  figs to fill out a couple of the armies, and as I slowly sorted through my heap, I found a number of WWII figs that I had picked up over the years for this purpose, but then had buried in my heap and forgotten about.

Over 600 WWII Germans between early and late war.

About 200 Mujahideen for the Soviet-Afghan war. 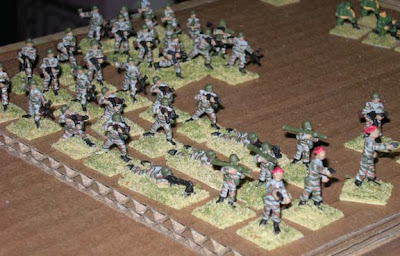 Forty or so Cuban Advisers for my modern Africa games.
I then started ordering figs to round out more of the armies with Cold War Soviets coming from QRF, and my first order to Rebel Miniatures to fill out my  1990s US Army Company.   Imagine my surprise, when I found that my existing figures were not from Rebel.  And say "Welcome" to my new US army of the 2000s.
The old figs must have been from Flashpoint (I'm guessing their US Army Rangers, painted below), as they are not the Rebel Minis figs (unpainted below) and I'm not aware of any other sources.  Here is a pic comparing a few of the figs:

I had some other Rebel Miniatures figs that I bought at conventions, but had never ordered on-line from them before.  Let me say that service was outstanding.  First the miniatures are fantastic quality, very finely detailed, and even better than the Peter Pig USMC figs, which are probably the best modern figs that I purchased previously.  Comms were great, and the order arrived three days after ordering.  I couldn't ask for more.
Anyway, despite the screw-up, I quite like my new army, though they set on my table, with 3000 others, waiting for a few moments of attention with a paintbrush and flock.  Despite finally getting to put a little time in on my troops today, my backlog will just get worse, as any day now, a hundred more Soviets will be invading my mailbox.
Posted by irishserb at 8:13 PM 4 comments:

Ghosts of Christmas Games Past

The day after Christmas we traveled to visit my wife's family, which for me includes a visit with an old friend and gamer located nearby the in-laws.  As it turned out, another of the old gang happened to be in town, so we had a mini-reunion of the old game group and couldn't pass up the opportunity to push some lead and throw dice.

Long ago, when I was still in college, and had no money for figs, I was a member of a wonderful group of gamers in Canton, Ohio.  Some number of us got together almost daily, and we must have played something on the order of 250 games per year.  In time, employment would eventually take most of us to the farthest reaches of the empire, and our group was no more.

Though our daily battles and silly antics are a thing of memory, last Monday was a flashback to my golden age of gaming.  Mark, who I hadn't actually seen in seven years or more, showed up at Craig's (some of you may know him as Gaming Models Craig) and we played a pick-up WWII game.  Mark must have taken every 15mm WWII German miniature that Craig owns, and I (not paying too much attention to what Mark was doing) took a US Armored Infantry company a platoon of Shermans and small recon element. 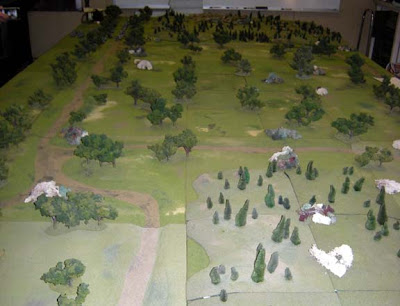 A view of the battlefield thrown together by Craig.
His table is something like 7'x14' and he uses modular foam terrain.
As we started setting up the game, I realized that I was outnumbered something like 30 to 1, so I added an Easy Eight company and four tank destroyers.  I also had air and artillery support available, so now I was only ridiculously out-numbered.

As we were setting up, we were swallowed by an avalanche of silly jokes and bad puns,. I t was 1983 again.

Mark set up maybe  150 German vehicles and guns and the associated infantry. There were at least ten Tigers among his hoard.  I entered the table with a jeep and an armored car and proclaimed this land liberated. After a few turns of movement, the American and German lead elements clashed, with a handful of jeeps and light armored vehicles fighting an intense micro-battle on this huge table with many hundreds of miniatures. 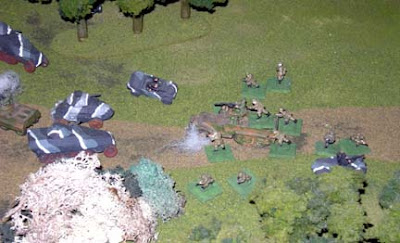 My recon successfully absorbing a significant portion of the German ammo supply. 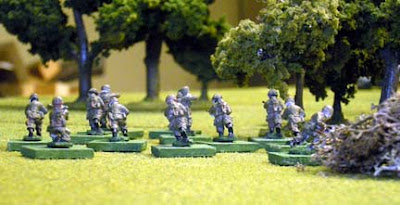 A squad of US infantry trying to move around the German right flank.
This didn't go quite as planned. 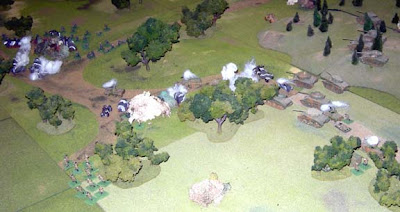 Most of the recon elements mutually annihilated, the heavy stuff begins to advance.
The game developed, with the heavier elements moving into range,  and the E8s got an early edge, though my best tank turned out to be the P47. 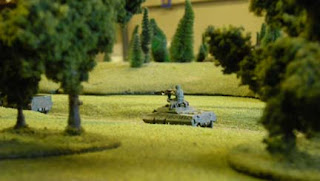 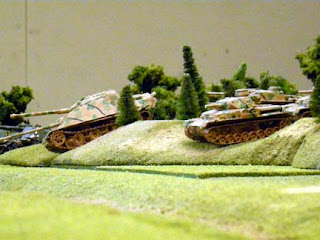 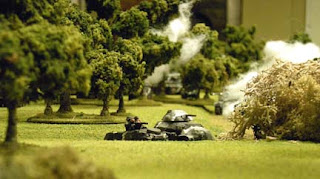 The Germans advanced, while my Americans stalled , being halted by a combination of German guns and gamer humor. the early success of the easy eights gave way to the mass of Panzers, Stugs and Tigers.  The Shermans still got the occasional lucky shot, but in the end, I was saved by the bell, as time expired, and we had to end our silly holiday battle. 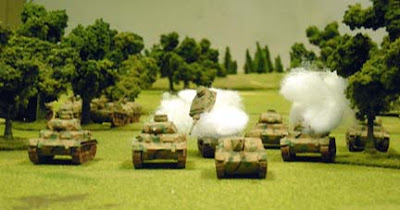 All in all, it was a wonderful time, gaming, laughing, good food, and most of all, great friends.
Posted by irishserb at 8:42 AM 4 comments: