Lieutenant Hickson called us scouts together with First platoon to brief us about a mission.  Turns out some kids disappeared from a farmstead a little north of New Clovis, and we're gonna go out and look for 'em.

Hate to say it, but people disappear all the time, and we don't go lookin' for 'em, not sure why these ones is so special, but what the heck, can't hurt to go for a walk up north, right?

Our recon section got paired up with a squad from first platoon and was sent to check out a few squares on a map.  We got this area that they call "The Krags".  Idea was that us scouts might notice things that regular troops might not, so they split us scouts up with pairs of regulars.  It was going to be weird out in the wastes without Sam and Panky.

We figured most likely the kids was just playin' and got lost or somethin', but could be that somebody took em, or somethin' just ate em.  We spread out into teams of three and advanced in a line, lookin' and callin' for em.

I thought all of the yellin' would just warn anyone who took them, that we was comin', but Panky said if they was just lost or hurt, they would hear us and yell back for us, that we would move faster than someone trailing' three little ones, plus we'd see signs of em in the wastes, and that if they was just ate, wouldn't matter none what we did.

Well, we started walkin' and it was hot and sunny, nothin' much happened, just a bunch of dirt and rock that we ain't seen before.  We found the occasional piece of junk, but nothin' from the kids.  Then, after several hours, and too much complainin' from the regulars,  Panky found some little footprints that was pretty fresh.

All of the teams continued searchin', maybe with a little less complainin', and a little more lookin'.  When we got into the heart of The Krags, we started findin stuff that shouldn't be there.  First there was some old junk, then camps, an then we started finding bones, skulls and stuff.  Weren't the kids, adult bones.   Then things kinda got interesting for awhile. 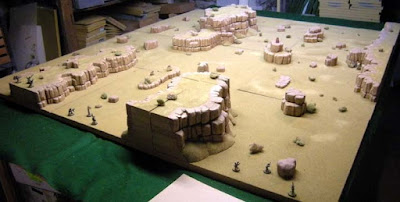 The Confederation search teams start along the near edge of the table. 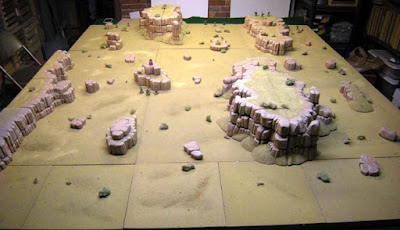 View from the opposite end of the table. 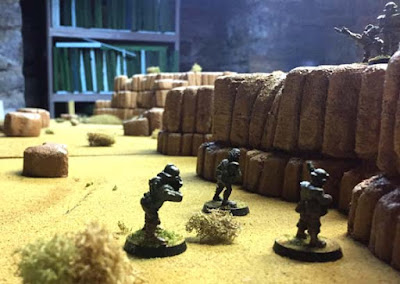 Sam's team at the extreme left. 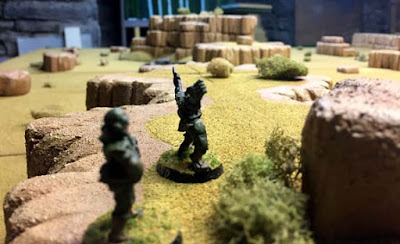 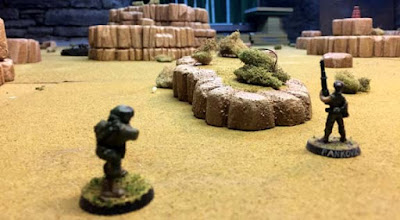 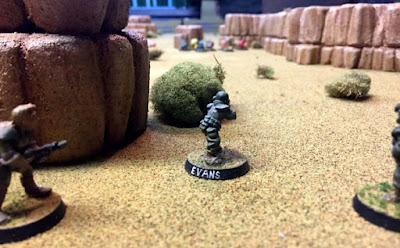 And Charlie's team at the extreme right.  A heard of chompers are
exiting their borough in the distance.
A groggy pair of eyes were opened, and were greeted by the mid-day sun.  "What was all of the noise, the yelling?"  He moved into a better position to see, and coudn't believe his eyes...food!  Lots and lots of food.  He woke up his siblings, and they were off at once, running across the dirt, happily, hungrily, toward the food.
Charlie had never seen champers before; he'd heard of them, was warned about them, but never seen them.  And there they were rippin' across the wastes, a blur of teeth, feet and bright colors.  he was so surprised that he didn't have time to be afraid.  His training kicked in; he just raised his weapon and started shooting. 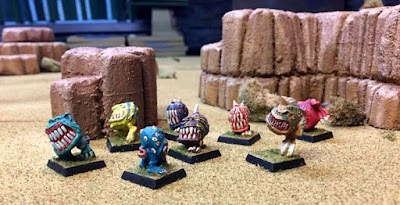 Chompers on their way to their next meal, 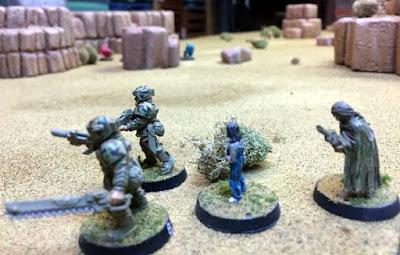 In the distance, well ahead of the Confederation troops,
three strangers and child noted the activity behind them. 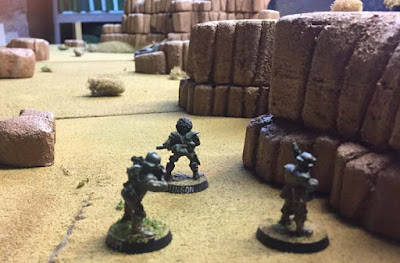 Meanwhile, out of site of Charlie and the chompers, Sam thought she
saw some motion up ahead, just for a moment, a flash of orange
in a sea of yellow and tan. 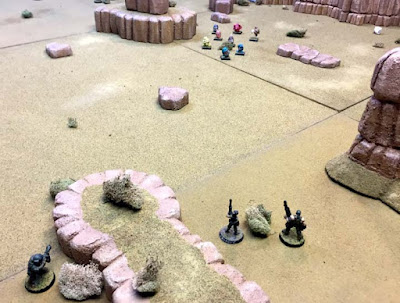 Panky's team noted that they seemed to be the chompers next meal,
and joined Charlie in shoot at the  hungry little beasts. 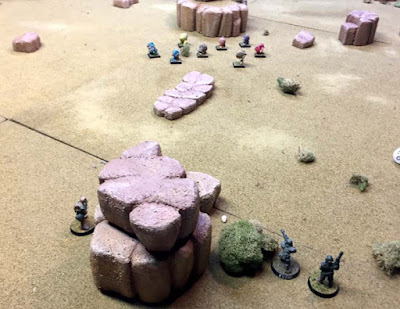 Charlie's team continues to shoot at the chompers, scoring hits,
though it took multiple wounds to kill them. 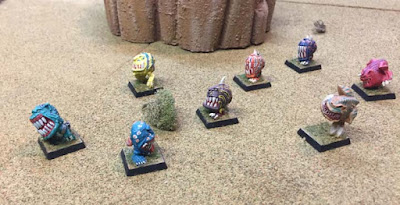 Self propelled hungry in a hurry!! 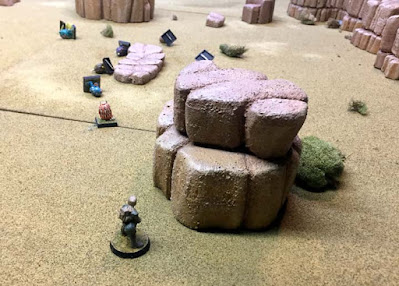 As the chompers got closer, three of the teams started scoring hits,
and in a short time, there was only one chomper remaining 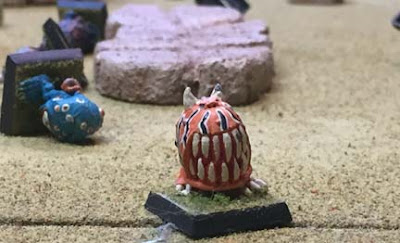 Undeterred by it's fallen siblings, the last chomper changed direction
and headed for one of the regulars in Charlie's team. 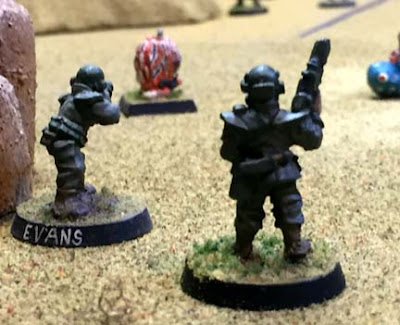 The trooper began to retreat and missed her shot,
so Charlie put an end to the thing. 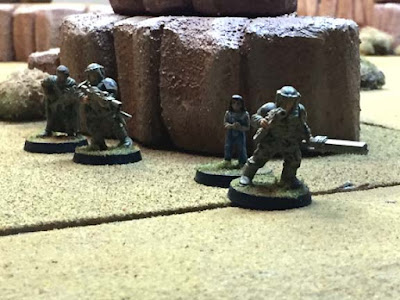 In the distance the strangers and the child continued on their trek,
leaving the chompers and their meals in the past. 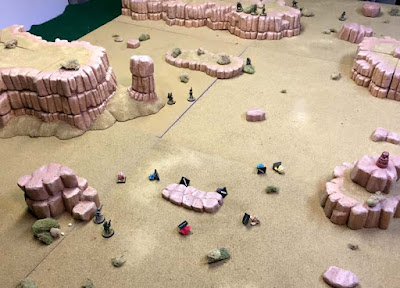 The situation after dispatching the chompers. 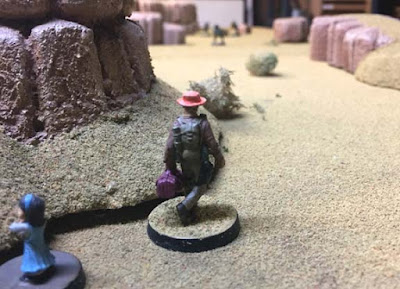 On the other side of the Krags, the man in the orange hat rescued
two small abandoned children, hoping to get them home,
he considers his options.

Sam in pursuit.
Sam thought she had seen something orange moving around. Now, convinced that they were following a man with two children, she was just about to instruct the two regulars in her team not to fire, when one of them let loose with his auto shotgun, way out of range.
She ordered him to stop shooting, told both to hold their ground, and chased after the man and the kids.  Though she gained on him, her quarry moved out of site around the rocks.
The man in the orange hat watched his pursuer for a second, briefly considered shooting her, but thought she might be confederation, and chose not too.  He hurried the kids as best he could, and contemplated their options. 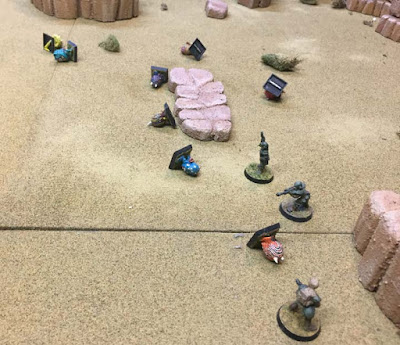 Charlie's team survey's the carnage before returning to their quest.
Just as the chompers began their rampage, Charlie was sure that he some someone in the distance, but now as he surveyed the horizon and saw nothing, except the dry, hot wastes.  There was some commotion off to his left, a couple of shots.  He knew Sam was over that way, and wondered what was happening. 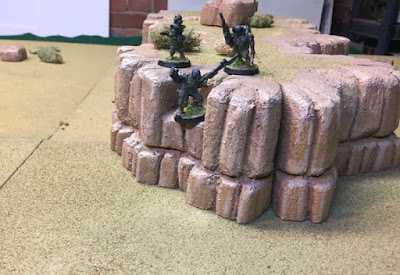 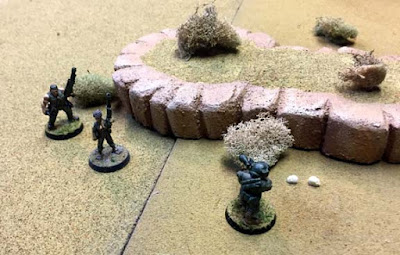 Panky's team investigates a couple of skulls discovered
by one of the troopers. 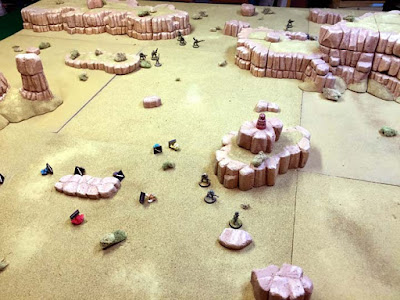 View from the right of the table, showing Charlie's team in the foreground,
and the other teams spread out in the distance. 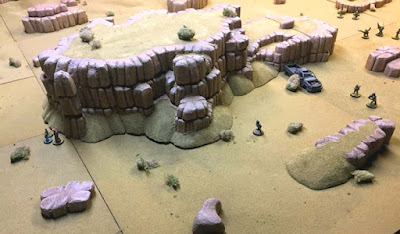 The man with the kids (left) attempts to escape from Sam and her team (right). 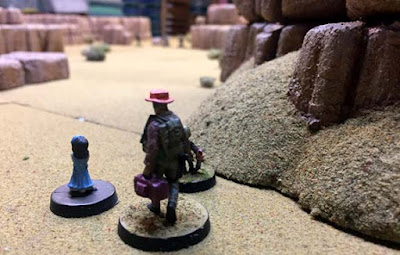 As the man and the kids rounded the end of the rocks, he realized
that there was no escape, and waited for the inevitable. 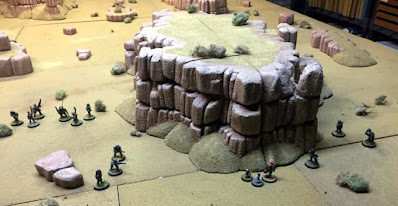 The Sam Cautiously approaches the man in the orange hat. 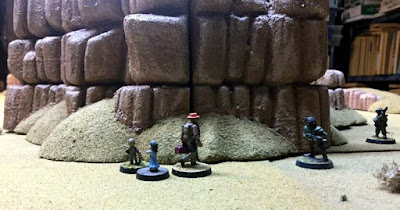 By the time we got to the kids, Sam was questionin' the man in the orange hat.  The kids were okay, and said that the man had helped them, after strangers had taken their older sister.  He'd tracked the people who took the sister, but hadn't seen anyone.
I 'm pretty sure I seen the man around town before, but don't know him.  Don't think he lives in town either.  He went with us, took the kids back to their farm, and then we all left.  He went east on foot, we road the Goat back to the barracks, and called it a day.  Just another day in the wastes.
________________________________________
This is the first game that I've played in 54 weeks.  It went nothing like I expected, but was a good game.  It was full of suspense the entire time, despite not involving any people to people combat.  Oddly, I didn't realize that the "strangers" were going to get away until almost the very end.
The chompers might have done some damage, had they picked Charlie's team for dinner.  But Panky's team was in immediate line of site, despite being farther away.  The choice proved fatal for the critters.
At first, the strangers were going to engage the chompers, but then used them as a distraction instead.  The Confederation troops were slowed by the chompers, and by having to investigate various discoveries such as camp sites, human remains, etc.  There were seven such sites on the board, but I think only three of them came into play, slowing the advance of some of the teams.
Two potentially interesting situations occurred during the game, when the regular fired his weapon at orange hatman.  If he had a rifle, instead of a shotgun, he might have killed a recurring, and maybe important character in my post-apoc campaign.  Additionally, if the situation had looked just a little less desperate for orange hatman, he might have opened up on Sam and her team (he's an excellent shot by the way), which could have had all sorts of implications, both in this game, and down the road in the campaign.
Lastly, the fact that the strangers got away with the girl (something I hadn't considered, when rolling up the scenario) opens up some possibilities for new stories and scenarios.
Posted by irishserb at 5:04 AM 6 comments:

Up to My Elbows in Germans

For the last few years, I've slowly been picking up figs to build some WWII German mid to late war infantry companies.  For Christmas, my wife got me five bags of Old Glory figs that have been on my "to buy" list for some time, so for the last few days, I've been cleaning, basing, and painting WWII Germans.

It has been a nice change from the Cold War, and I've really been enjoying the process, feeling a bit of the spark felt when working on my first Germans, decades ago.  I will be adding a motorized infantry company, and a non-motorized infantry company, for which I still need to get most of the carts and horses.  I intend to pick up a few packs of Peter Pig odds and ends in the new year, and add a few supporting platoons as well. 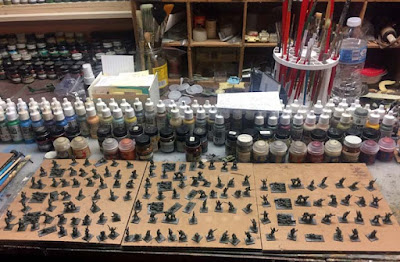 The foot sloggers are on the first two trays, the last is the third
platoon from the motorized company.

I got a little more than 250 of the little guys based, before running out of basing material.  More should arrive before the end of the week, so by the end of the next weekend, I'm hoping to have two companies, plus some extra tanks killers ready to go.

In order to figure out how to paint the little buggers, I cruised the net for some guides, found much conflicting information (big surprise), and then pulled a couple of books off of the shelf, an old standby, Andrew Mollo's WWII uniform guide, couple of ospreys, and another, a compilation of equipment photos.  I also referred to a couple bits of hardware that I acquired decades ago.

After reviewing the Mollo book and equipment guide, I tossed out much of what I found online, and selected 23 bottles of paint for my Germans.  Mostly Vallejo, with a some old Model Master, Polly Scale, and one bottle of Pactra Military Colors.  I can't ever remember needing 23 bottles of paint to paint a 15mm fig before.

I managed to finish 51 of the figs yesterday, and have to say, that all my effort resulted in some truly unremarkable looking figs.  I then perused the net again, and after looking at maybe 150 pics of other peoples 15mm WWII Germans, decided that there are simply a lot of more patient gamers out there, than I.

Most photos depicted figures that are far superior than my own effort, many significantly so, and though I could probably do a little better, I want to get them done in the next week, rather than near the end of June.  Aside from noting the superior quality of the figs pictured on the net, I also noticed that in those 150 or so photos, must have been 146 and a half different selections of paint used to paint those same troops.

After viewing the 130 correct shade s of Feldgrau, I had to smile at all the effort we go through to get things "right", only to find that there are sometimes a nearly endless range of right answers. 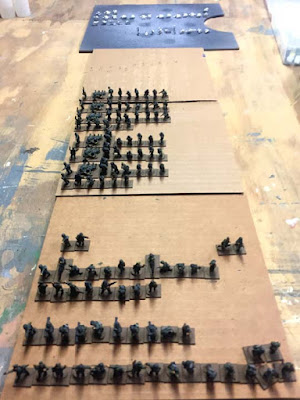 The rest of the motorized company waiting to
be flocked.