This is a re-post of the pics from my 28mm sci-fi bunker complex from my old website.   Over the last couple of weeks, I've been toying with design ideas for my post-apoc terrain, and got some of my bunker bits out, while considering how I might fit them into my PA world.  'veI had a few requests to re-post some of the pics. including one this past week, and figured since I can't do much else right now, that I might as well do so.


The first stage of the bunker complex was built over the Thanksgiving holiday about five years back.  It was originally an objective for my daughter's space orks, with visions of expanding it for all sorts of sci-fi and PA gaming.  The most important aspect was the modular design that would permit adaptation to the needs of various games and settings. 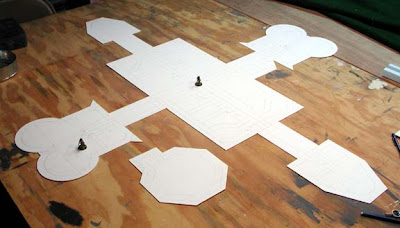 The basic layout was drawn onto sheet styrene, which would act of the floor for some of the modules, and a base for the foam construction otherwise.  The figures are 28mm Imperial Guard to give a sense of scale.

The walls and roof sections were constructed from blue polystyrene insulation board, with the various strips and sheets of the foam cut on a bandsaw.  The foam shapes were cut to size, glued with artists matte medium, and pinned until dry with straight-pins. 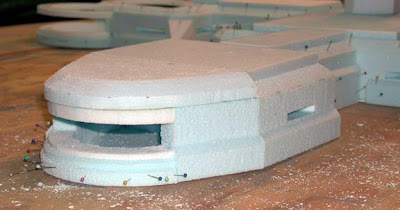 This view shows some of the pins still in place, holding layers on foam strips on the front of one of the smaller gatling laser turrets. 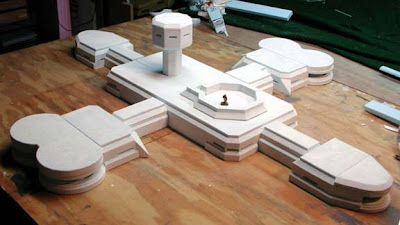 This is a view with foam construction complete, and after a coat of acrylic paste has been painted on to protect the foam a little. 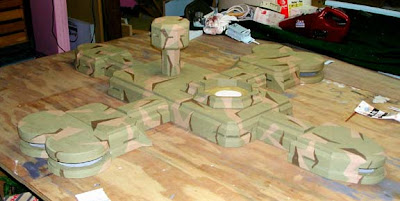 A view of the overall base painted with artist's acrylics.  Below is another shot of the painted base. 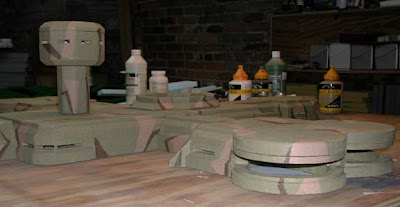 Next step was to build the weapons for the turrets and rooftop. 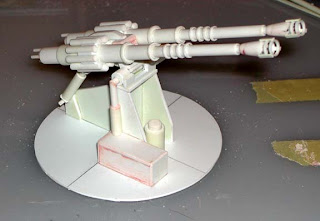 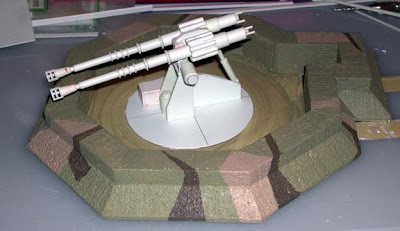 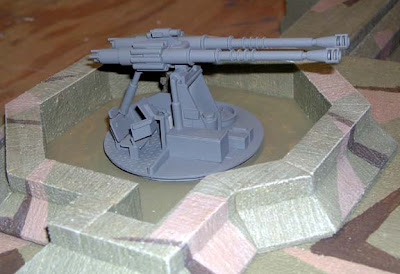 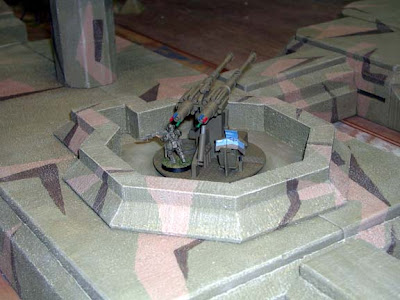 The last four pics are views of the air defense mount for the rooftop.  The gun was scratch-built from styrene sheet, strips, and shapes from Plastruct and Evergreen Plastics. 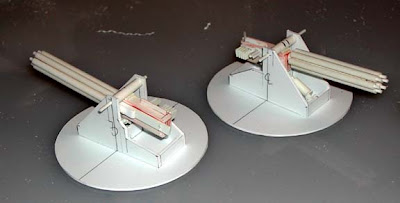 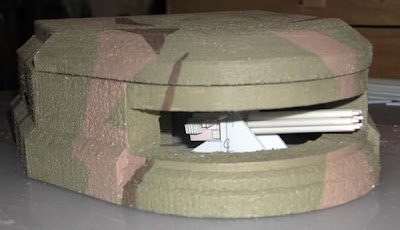 Above are four views of the gatling lasers for the smaller turrets.  The gun shield was made from a piece of acrylic tube. 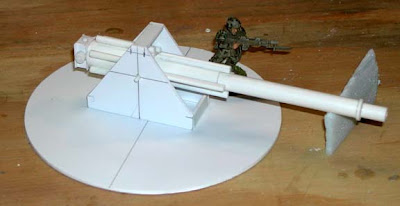 Above is a view of one of the main guns for the two double turrets early in the construction.  Unfortunately, I can't find any other pics of these guns after more work was completed. 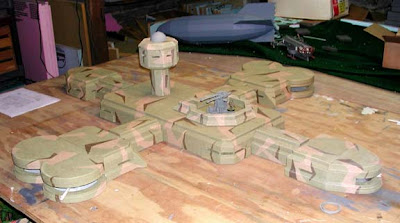 An overall view with the guns still in process.  In this configuration the model measures roughly 4'x5'. 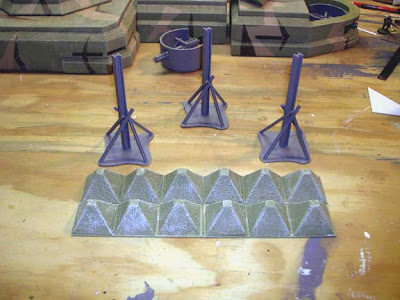 I also made some obstacles to place around the complex.  Dragons teeth for tracked and wheeled vehicles and the structural thingies to annoy skimmers, grav and hovering vehicles. 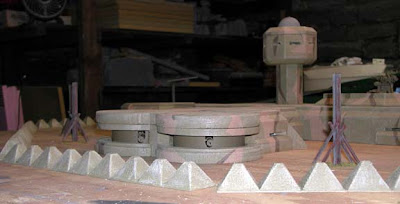 The last two shots are of the first stage of construction more or less complete.  The last photo shows the business end of one of the primary double turrets.

A little over a year later, I added the second stage of the bunker complex, which consisted of 29 new pieces.  These included more tunnel sections, entrances,  intersections for the tunnels, and open  fighting positions for the infantry. 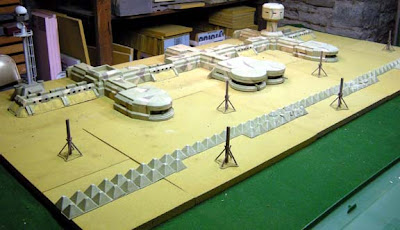 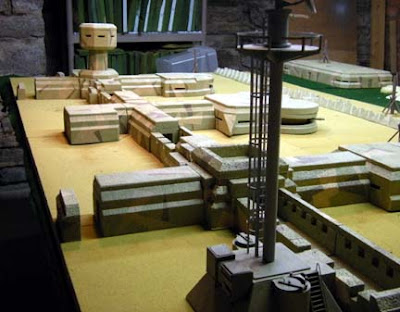 The two photos above show second stage construction incorporated with first stage turrets, and a communications tower that I made a year or so prior to the first stage of the bunker complex. 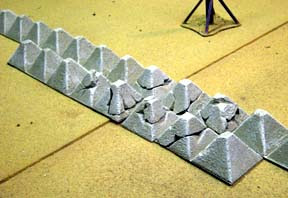 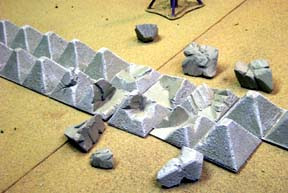 I also added a bunch more obstacles, including some to represent battle damaged obstacles.

All of the new sections from the second stage of construction are shown above.  I also made a few sections with battle damage.  The new modules measure about seven feet in length, when arranged as in the photo above. 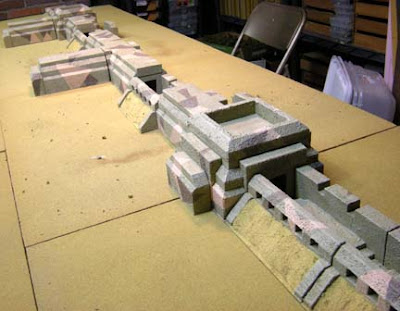 The view above shows some the construction detail in the new modules.  Just beyond the two open fighting positions in the foreground is a four-way tunnel intersection.  Covering the front entrance is a free standing bulkhead.  I made a number of these bulkheads to cap unused doorways, and to place in front of entrances to protect them from direct assault.  The fighting position on top of the 4-way module is also a free standing piece. 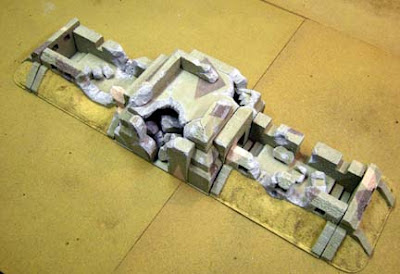 A view of the battle damaged sections.   There are two types of open position modules, one has a doorway/walkway to the rear, shown in the nearest unit, and the other has a solid wall in back.  I also had to make end caps for the fighting positions. 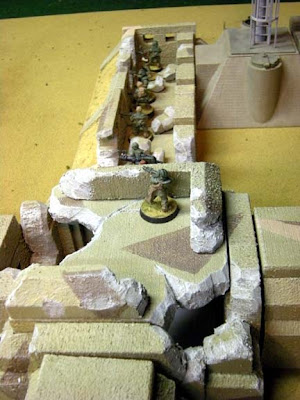 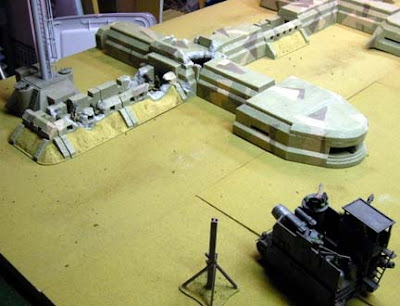 The last three shots are of the battle damaged sections.  I made bunch of broken concrete debris, but never could settle on how to attach or place them, so they remain loose chunks that my cats just love to bat around.
Even before the second stage was complete, I had already design pieces for the third stage, including corner bastions for the open positions, checkpoints, small blockhouses to cap tunnel sections, smaller watchtowers, and various clutter for the rooftops, including equipment, antennae, smaller air defence guns and missiles,etc.
A fourth stage was to include about a dozen more damaged sections including one of each style of turret, but after I completed the second stage, my daughter's interest in spaceorks started to fade.  So for now, the last two stages exist only as a dozen pages of notes and plans.  Hopefully, as I explore the role that the bunker might play in my post-apoc games, I will find need to complete some portion of the last two stages.
Hope the pics are of some interest or inspiration, if nothing else, I had a lot of fun building it.
Posted by irishserb at 4:59 PM 10 comments: