Over three weeks straddling the holidays, we played the remaining battles of turn seven (July, Year 168) in our SFB campaign.  Here are overviews of the battles, and the situation at the end of the strategic turn: 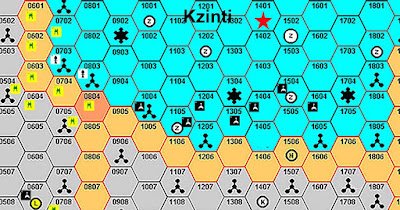 Not the best map, but it will allow you to locate the battles on the F&E map.

With respect to the following summaries, the D7 and D6 are Klingon heavy cruisers like those in the original Star Trek TV series, and F5 is a frigate class ship, much smaller and weaker than a D7, the E4 and E3 are even smaller escorts.  And a Kzinti police corvette is like a police whistle with warp engines.
_____

In hex 1105, a small Klingon fleet battered the planet's ground defense base, and fighter squadron.  The Klingon forces consisted of a D6 flagship, 6x F5s and variants including a CVL, 2x E4, and a E3. 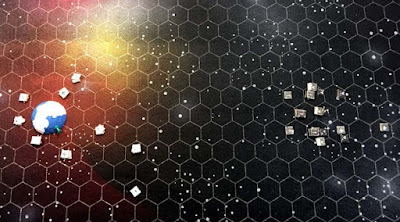 Kzinti fighters hopelessly defending the planet, while the Klingons
begin the pounding from the right.

The Klingons ships suffered only mild shield damage, and no ships were lost.  The combined Klingon firepower simply overwhelmed the meager defenses in a straight on bull rush attack lasting only a turn.  The lack of Kzinti defenses are a consequence of the Kzinti massed ship gamble that resulted in the tremendous Kzinti losses described a couple of battles back in Collateral Damage

A  Klingon battle station at hex 1205 was destroyed in an almost identical situation as that of hex 1405 (described in a previous post).  the Klingon force consisted of 10 ships featuring 7x D6/D7 classed cruiser variants, a couple of F5s and an E4, while the base was defended by its fighters and two Kzinti police corvettes.  No ships were lost in the battle, with the Kzinti corvettes disengaging prior to the base actually being destroyed.

A smaller Klingon fleet attacked the Kzinti battle station in hex 1004.  This Klingon force consisted of only 8 ships; 1x D7, 2x D6, 5x F5 variants, and a E4 escort.  The base was again defended by its fighters, a pair of police corvettes, and a mine field. 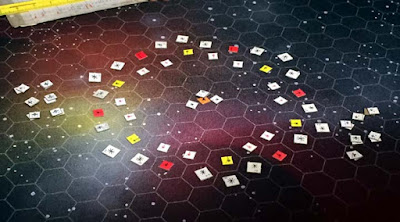 The Kzinti base is in the center with the police corvettes and a shuttle,
surrounded by a double ring of mines (represented by all sorts of goofy counters)
and the two groups of fighters located outside the mines.

By this point, the Kzinti had started to develop better tactics with respect to defending their nearly abandoned bases.  The Klingon formation attacked much the same as the other, slightly larger and notably heavier, fleets had done. 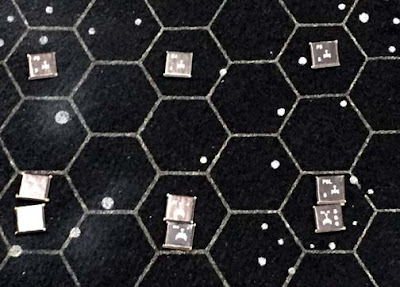 The Klingons attacked with an E4 front and center, F5s on its flanks,
and an F5 and D6/7 paired a couple hexes behind each leading ship.

As the Klingons advanced, the Kzinti let loose their typical volley of drones (missiles), which demanded a larger portion of the Klingons firepower to destroy with the generally smaller ships.  Klingon drones and fighters were launched (an F5 CVL was present), dedicated to sparring with their Kzinti opposites.

This left the Klingon ships with taking on the base, but as fate would have it, captor mines did notable damage to the leading escorts, eliminating their shields, and each took some damage from either drones or the base.  During the exchange, only about a quarter of the Klingon disruptors hit, and when combined with mostly phaser 2s, very little damage was done to the base.

As the battle developed, the Klingons had lost some firepower from the lead ships, and were on the losing end of the fighter exchange.  This meant that Kzinti firepower would remain almost the same in the next turn, but have greater destructive force at closer range.

The Klingons would need at least two more volleys of fire to destroy the base, and would likely lose 4-6 ships during that exchange; a expense not worthy of the destruction of a single base.  So the Klingons withdrew, Kzinti base intact.  The Kzinti had their first victory against the Klingon onslaught.

On the Kzinti side of the Lyran border, our first fleet action with miniatures occurred.  A small, but noteworthy Kzinti force consisting of an CV and a CV-Tug (a palletized conversion of a cargo tug, functionally making it a heavy carrier), encountered a formidable Lyran fleet. 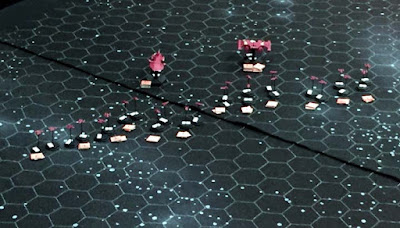 The Kzinti carriers with fighters deployed, and drones (counters) launched.

The Lyran fleet was composed of 1x BC, 1x CC, 3x CA, 2x CW, 1x CL, 1x Battle-Tug, 1x DD, and 1x Scout.  The Kzinti were at an obvious disadvantage, but decided to see what trouble they might cause their little cousins from across the border.

As the two forces closed with the Lyrans expending notable resources to deal with Kzinti fighters and drones, the Lyrans were forced to fire at greater range than they would have liked, opting not to face a barrage of short ranged fighter fire.  The result was that they significantly damaged the CV-Tug, and destroyed most of the fighters, keeping them beyond the fighter's useful phaser range. 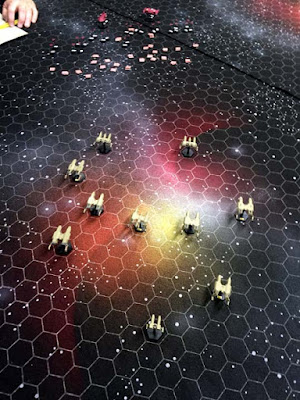 The Lyran fleet closing with the Kzinti.

After firing, the Lyrans broke to their right, intending to loop around, recharge weapons and finish off the CVT, but they never got the chance.  As the turn ended with the Lyrans in the middle of their loop, the Kzinti disengaged, losing most of their remaining fighters, but stealing victory from the frustrated Lyrans.

The last battle consisted of a huge , if anti-climactic, fleet action between the Lyrans and Hydrans at the other end of Lyran space. 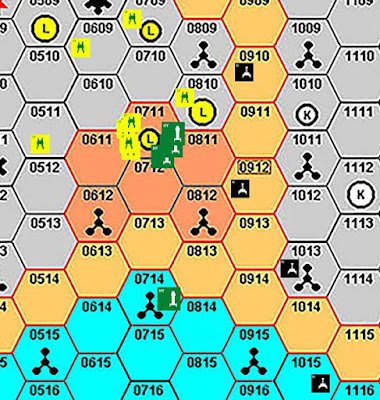 A huge Hydran force of roughly 45 ships had invaded Lyran space, heading towards the planetary system in hex 0711.  It took three turns before the Lyrans could pool enough forces to consider taking a stand against the Hydran force.

The meat of the Hydran fleet consisted of 2x CV-Tugs, 3x Command Cruisers, and 15 Heavy cruisers, escorted by 25 smaller vessels of assorted types. In addition to the 24 fighters carried by the CVTs, many of the Hydran ships carry their own escorting fighters, resulting in more than 70 fighters deployed in this battle.

The Lyran combined force, fielded roughly 33 vessels, but only 1 was a heavy cruiser or better, 21 were destroyers or smaller, and of course, the Lyrans don't use fighters (except in planetary defense).  Lyran forces were 1xCC, 3x CW, 6x CL, 1x DW, 1x DD, 7x FF, 9x Pol-Corv, 1x Scout, and 4x Q-ships (weaponized freighters making them almost comparable to a frigate. 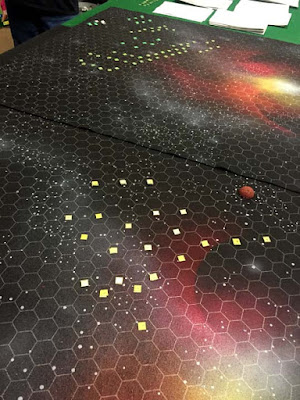 The Lyrans are in the forground: the two lead rows,
in the distance are double stacked fighters.

The Lyran hope was that the Hydran force could be separated during battle, allowing the Lyrans to fight a more balanced battle against a portion of the Hydran fleet.  This did not happen and two thirds of the way into the first turn the Hydran fighters had closed enough to start causing significant damage to Lyran ships.  The 12 Lyran fighters fired drones which never reached a target, and the Lyran ships were largely tasked with engaging Hydran fighters.

The fighters, with a little long range Hellbore support from a few ships, destroyed a pair of Lyran frigates and a light cruiser, and caused a little damage to a few other frigates and police corvettes.  At this point, all of the Lyran ships that hadn't yet fired targeted a single Hydran cruiser, but couldn't even breach its front shield.

The Lyrans broke formation as the first turn ended, and disengaged from battle, surrendering the planet to to the little blue guys.

The Lyrans only lost the three ships (well, and a planetary system), while the Hydrans lost around 24 fighters, which can be replaced by their accompanying freighters full of replacement fighters.

The Klingon advance into Kzinti space is going well, despite the temporary setback at the one battle station (the new fleet commander will fix that, I'm sure).  The situation looks bad for the Kzinti, and without some Federation help soon, the Kzinti empire could disappear altogether.

The Lyrans had an odd turn.  They gained a minor advantage in Kzinti space, but lost the battle tactically, destroying no ships, despite having an tremendous advantage in ships and firepower.  At the other end, despite losing three ships against the huge invading Hydran fleet, they gained insight into the tactics of the Hydrans, and to how effective their weapons are (Despite all of my years playing the game, you can count my experiences with the Hydrans on one hand, so it was a needed learning experience).

in another strategic turn, the Lyrans will have a more formidable force in position to counter the Hydran advance (who must advance to link up with the Kzinti 15 battlecruisers that are otherwise cut off, by turn 9), and both of us are eager to see how that battle turns out, as it likely will have tremendous impact on the future and significance of both empires in the remainder of the campaign.

Our next battle is planned to take place in three weeks.
Posted by irishserb at 6:09 PM 4 comments:

Free time has been scarce lately, as changes in the day job have coincided with additional duty on the home-front.  I've been squeezing in every minute that I can, trying to make progress on my various 6mm buildings; casting, packaging, creating instruction sheets, photographing, etc.

My own projects have suffered, though I do occasionally spend a little time attending to one thing or another.  My 6mm Mugabian infantry are finally flocked and in their storage box.  Initially I painted the bases the wrong color, had to re-do them, and then ended up with too much green in the flock.  Oh well, at least they are functional. 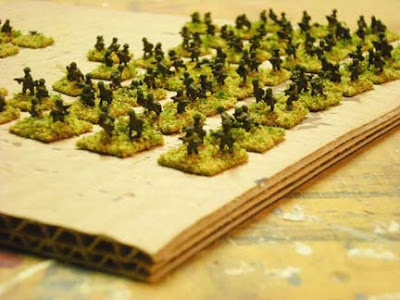 I also managed to figure out what I needed to round out their Uwandan counterparts, having settled on the Scotia South African figures to represent them.  With any luck, I'll have those ready for the battlefield in about a month (or at least by June).

Last weekend, I managed to build-up kits of the 6mm African homes with courtyards.  There are four different kits, but buildings can be mixed and matched as desired to make a variety of configurations.  Each kit will come with three of four different buildings, a gate,  and styrene parts to make awnings, awning posts, and walls.  Each will come with a small instruction sheet, with a scale template/plan view of the building/courtyard arrangement, and brief instructions or notes. 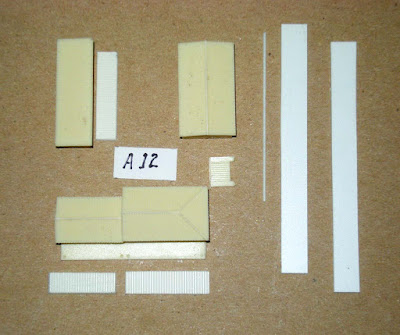 Example of one of the kits

Unfortunately, the parts are quite small (i.e., fiddly), will require some accurate cutting (awning posts), so some amount of modeling skill will be required to complete them.  I tried to find ways around this, but just can't make them as detailed as I want, and keep them simple and affordable.

Here are the built-up kits with a couple GHQ models, a Centurion and a Saracen for scale. 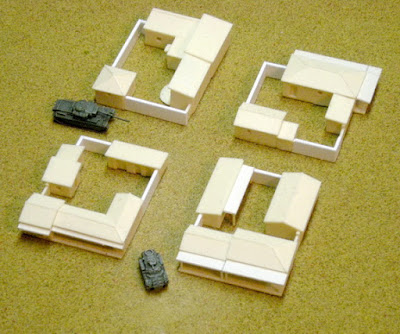 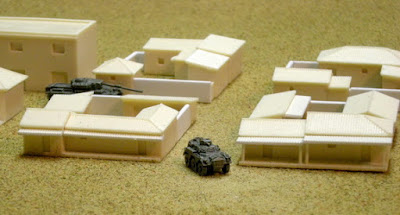 I will mount mine of base's made of styrene sheet, which is not included in the kits, but they were designed to be free standing and do not require bases.

Another thing that I've manage to do, is update my old 6mm Middle Eastern building models, making them solid models with doors and a few other details added.  these are all based on buildings from the 1967 and 1973 Arab-Israeli conflicts.  There are ten different buildings, with  six of them available as battle damaged structures in addition to undamaged versions.  Here are a few of those: 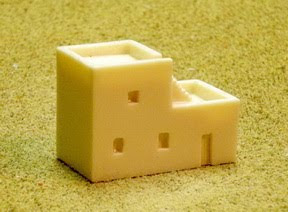 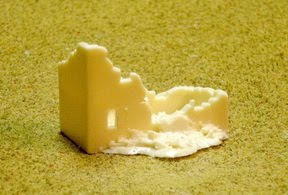 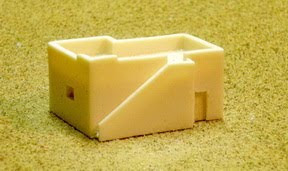 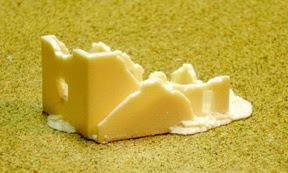 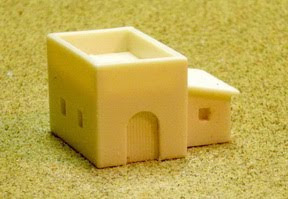 The models were intentionally kept simple, so that I could add small details, such as awnings, or bits of exterior relief, to create some variety with a small number of models.