Not much to show yet, as April is a busy month for me, but slowly making progress on a batch of 1/72 scale aircraft for Vietnam.  Some of these have been lingering in states of semi-completion or on the shelves for 25 years, while others are kits acquired in recent weeks.

Included are an assortment of UH-1Bs and D models, an old OH-6 started in the late 1990s and missing some bits, a single Skyraider, an OV-10 that has been waiting on my table for decals for the last few years, a couple of CH-34s, one almost done, and the other still in the box. 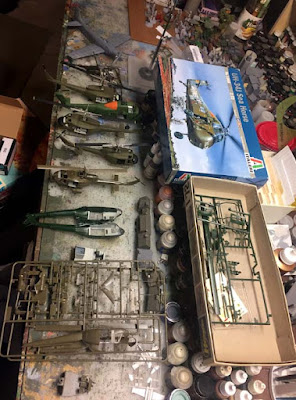 Two of the UH-1Bs will be gunships, the other will be clean.  The UH-1Ds will all be transports.  The OV-10 will be finished as one of the Black Ponies, and it occurs to me as I'm writing this, that I finished a couple of UH-1B/Cs(?) as Seawolves a few years back, but they didn't turn up when I was sorting through models last week.  Here's a pic copied from an earlier post:

Guess I'll need to try to figure out where they are hiding.

All Over the Place

Been all over the place hobby-wise over the last couple of weeks.  Russia's invasion of Ukraine has released the stranglehold that the Cold War had on me for the last four years, and I'm using the shotgun approach to the hobby at the moment.

Though the stranglehold is released, I haven't quit the Cold War completely, and having given up on the future availability of the old Armies Army 15mm British, the Totentanz French, not being comfortable with whatever is happening with the QRF post war lines, and seeing companies replacing metal with plastic infantry otherwise, I broke down and ordered some Team Yankee British and French for the Cold War.  These figs will round out infantry companies for my 1982 Cold War forces, though it will likely be awhile, before they get any attention. 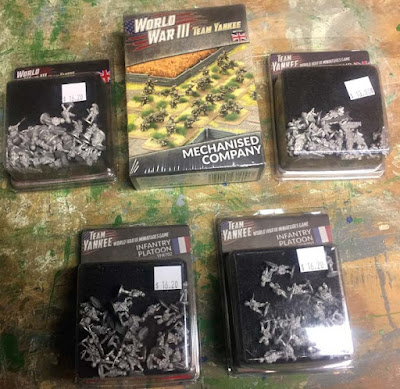 Another purchase is PeterPig WWII British infantry  to fill the role of my 1958 15mm British infantry.  I may play around with the web gear to better mimmic the later pattern kit, but most of the video and pics that I've found from the period, seems to suppose the advice given to me on The Wargames Website regarding the British kit in BAOR at the time.  I also got US Bazooka crews and will do head swaps to use them as the M20 British Bazooka teams.  Purely by chance, I lucked out and missed the price increase by about a week. 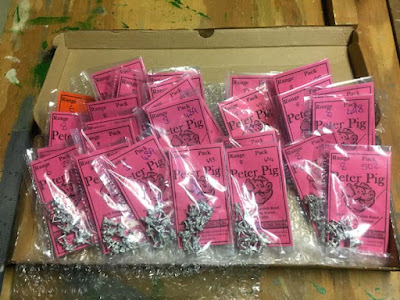 Right now, I still have a little touch up to do on 6mm German aircraft for 1940, and the 1940 French aircraft are awaiting decals. 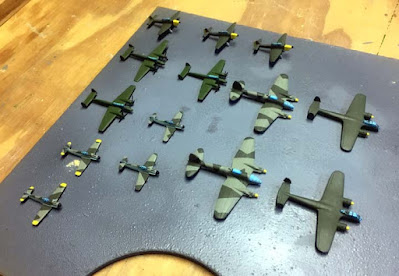 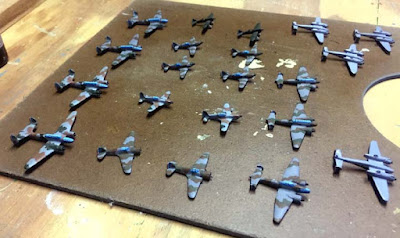 Last weekend's kit show was sort of a bust.  Following a week of chaos, where I cancelled going twice, and at the last minute decided to go again.  I found a single CH-34 kit  (out of about 80 1/72 and 1/100 scale kits that I have need for), and after gas and admission to the show, basically paid $6 more for it, than I would have on E-bay.  Right now I have 1/72 scale skyraiders and various UH-1 helicopters in progress on my table for Vietnam. 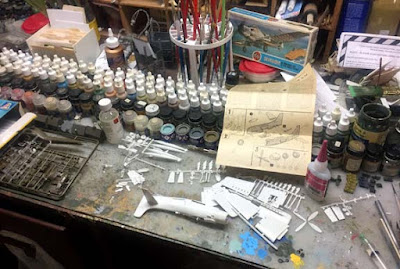 1/72 scale aircraft in process for Vietnam.

I've been tinkering with modular hill designs for the Soviet-Afghan war, trying to come up with a steeper hill system than I currently have, that will still allow realistic movement and deployment of miniatures.  Also been re-reading The Bear Went Over the Mountain, which suddenly has me craving some tabletop battles set in Afghanistan.

Another adventure has been trying to find a modern military vehicle or three (Humvee/M-Rap kind of thing) for a 28mm post apoc scenario that I've been wanting to get on the table.  I probably don't really need it to play this scenario, but it could come into play, and would then likely be tied into a series of games.  But, can't find what I need for under about $40-$70, and am not wanting collectors items, just simple toys to ruin for a game.

No nifty new items completed, but progress is being made.