Looking Back, Thinking Ahead, and Happy New Year

Well, after reviewing my goals for 2020, I've decided not to bother setting any for 2021.  The only thing that I planned to work on, that I actually I did work on, was preparing for my 6mm Cold War campaign.  I'm ready to get on with World War III, but first got to get about a hundred cubic feet of my daughter's junk from college out of the way to set up my the strategic map board/game.

Otherwise in 2020, I got some other stuff done; a couple post apoc buildings, 15mm Cold War British and Soviet vehicles, and a few other bits, but almost none of it was really planned, and since I didn't really do any gaming this year (only 3 games played), I'm basically 1 for 6 on planned projects for the year.

Covid didn't really impact me that much, as I'm already nearly a hermit anyway.  I worked pretty much a normal schedule all year, and ended up with a little less hobby time this year, as compared to last, resulting in about 190 fewer miniatures painted than in 2019(1457 painted during 2020).

For 2021, I'd like to have all kinds of big plans, but the reality is that I expect to play a little more, as I won't be chronically obsessed with working on Cold War stuff, since it is more or less done, and otherwise, will go wherever the gaming winds take me.

I'm pretty sure that I spend some time fighting WWIII, and probably add a little bit more stuff to it.  I'll probably continue to piddle along with the post apocalypse, as I've done for the past few years.  Our Star Fleet Battles campaign will probably pick up again at some point this year, as will the the conflicts in imagi-Africa.

I've been slowly working toward gaming Kursk and the battle for Stonne (1940 France), and might get some work done on those. And then there is that "Near Future" thing, with KGB sleeper cells, MIB, and alien invasions all looming.

Of course, at any time, any of those projects could be disrupted by visits to Vietnam, the Sinai, a land filled with orcs and dwarves, the Soviet invasion of Afghanistan, or colonial adventures in the South Pacific or East Asia.

I hope everyone out there has a great 2021, Happy New Year!! 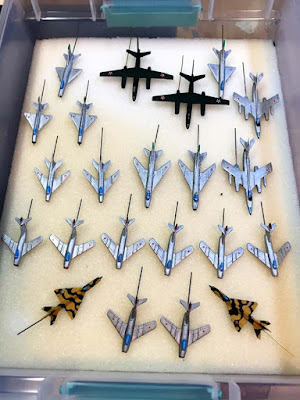 I still have 52 aircraft in the painting queue, mostly helicopters from the 1950s and 60s.  I plan to paint them all, but will likely only decal the 1950s models for now.  The F101Bs still need some "jet exhaust" applied to the extended nozzles and underside, but are otherwise done.  They will have to sub for A and C models in Europe. Most of the other models are still just getting base-coats applied. 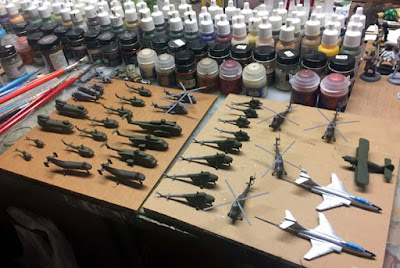 I'm also still trying to decide what to do about my rotor disc problem.  Scrapbook dies to cut the appropriate sized rotors were going to cost upwards over $50 (I need rotors ranging from 1.125 to 3 inch diameters), more than I wanted to spend, so I probably need to dig out my circle cutter, as soon as I find some clear stock to make them from.  Not looking forward to cutting out rotors for 70 helicopters.

I discovered a couple of years back that none of the traditional suppliers for 6mm military models made a Mil Mi-4 helicopter, an important model if you want to game the Soviets in the 1950s or 1960s, and had resigned myself to proxying them with Scotia Mi-2s.

Recently, I discovered that an Mi-4 model was available through Shapeways, paired with an Mi-2, and placed an order for four sets of models.

I just received my order of micro-scale Mil Mi-4 helicopters from the SNAFU store on Shapeways.   Coupled with an Mi-2 helicopter, the default option is in blue processed versatile plastic at $15.10 per pair of helicopters.

I'm not familiar with the blue plastic, and opted for white processed versatile plastic at $11.10 per pair. The pricing for the pair in this material is less than the cost of single helicopter from GHQ and probably in the range of 1.5 times the cost of Scotia-Grendal for a similar model.

The models are nicely detail, being just a little softer than the fine frosted material that my other Shapeways models were made from.  The finish is slightly grainy or gritty, with maybe the texture of 280-320 grit sandpaper.  I suspect that much of that grit will be lost in the painting process.

Here a few photos of the raw models. 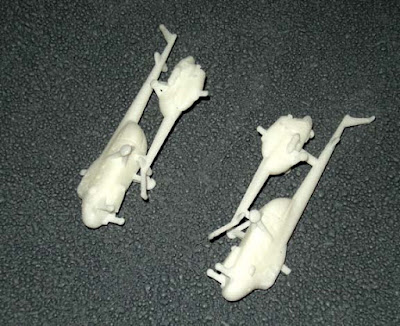 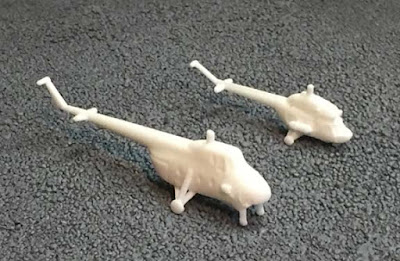 Sorry that the last pic is out of focus, but both my phone and camera died after taking a total of seven photos.  It is a comparison shot of the SNAFU/Shapeways and Scotia Mi-2 models.  The Shapeways model appears to be equipped with a rocket pod on each side, but the sizing and shape is surprisingly close.

I have to say that overall, I am pretty happy with the models, though have some concern about how brittle the material might be.  The models are sold without any kind of rotors, and are one piece as depicted in the photos.  I'm hoping to have a painted example to share by the end of the weekend.