This is the third of three land battles, in which, Mugabia tries to secure the Pettu tribal territory along the Uwanda side of the border.  The battle took place just east of the city located at objective A60 roughly centered in the map below. 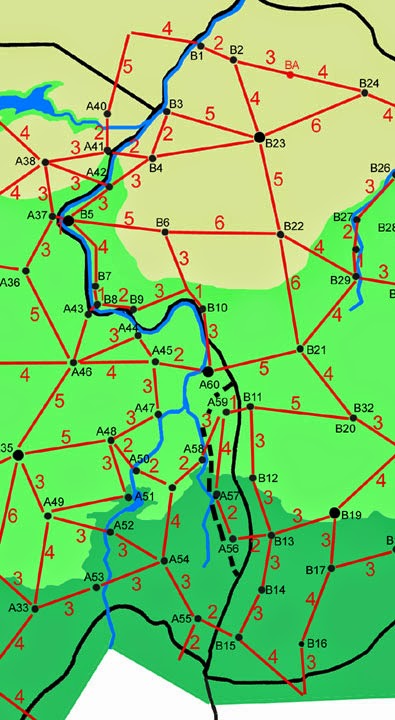 The Mugabian plan of battle was to simply steam-roller a large force through the Uwandan defenders and take the city at A60.

A series of air battles left Uwanda with marginal control of the air and good intel about the advancing enemy forces.  Uwanda planned a defense in depth with a light screening force of armored cars making the first contact with the enemy.  Armor would then pick at the Mugabian advance, eventually withdrawing behind and reinforcing a line of dug in Uwanda infantry.

Major Bola surveyed his forces.  Well trained by Russian and Cuban advisers, the major knew that he could count on his men.  Major Bola had fought many battles during the power struggle in Mugabia after the French left.  But, never had he fought with such a fine force, so well equipped.  As he admired the scene before him, he felt an excitement  unknown to him since his youth.

The Mugabian advance was lead by recce consisting of a platoon of BRDMs and a couple sections of scouts in BTR-152s.  Some distance behind was the main force, a company of T-34/85s, an infantry company in BTR-152s, a couple of ZSU-57s and a battery of heavy mortars.  Major Bola was in his special command tank with an artillery spotter attached.  Two additional motorized infantry companies would follow on as needed. 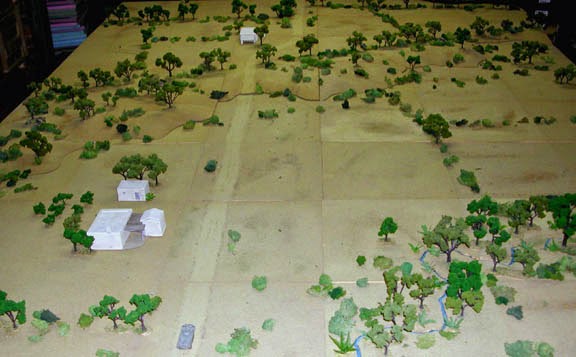 The battle force advanced.  In time the BRDMs found the line of Uwandan light armor; where, three Saladin armored cars made short work of the BRDMs.  As no report was made by the BRDMs prior to their demise, the infantry scouts were forced to deploy from their transports to search for the enemy, taking much valuable time. 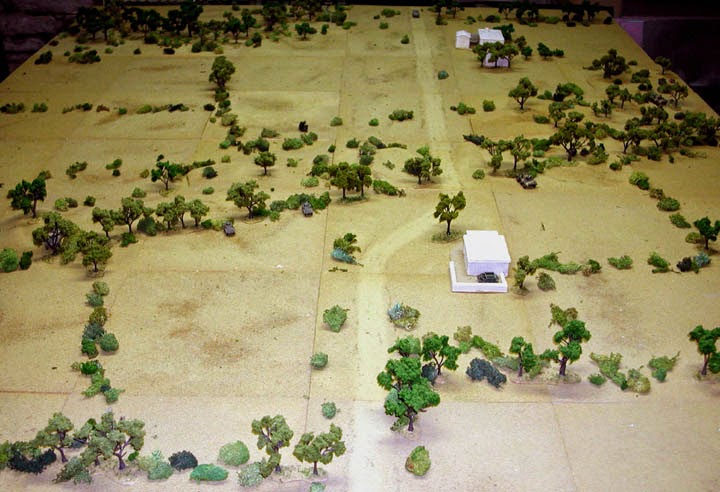 An easterly view from the Uwandan perspective (above).

The Mugabian scouts eventually found the Uwandan screening force, and engaged in a brief skirmish with a Uwandan artillery observation post.  Again the Saladins were called on, subduing and destroying the scouts, but losing one armored car to an RPG.

The observation post was lost, as was communication with Uwandan artillery for a time.  The commander of the screening force pleaded for reinforcements, having lost artillery support.  Reinforcements arrived in the form of a troop of Centurion Mk. IIIs only moments before the Mugabians did. 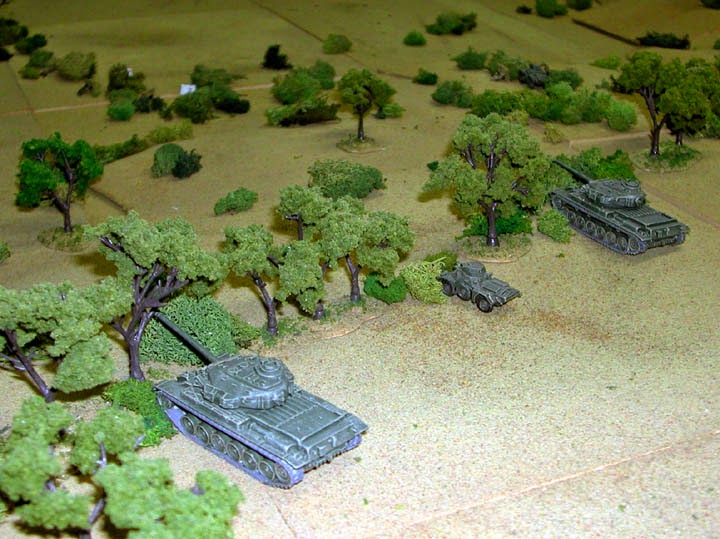 Uwandan Centurions strengthen the line.
Meanwhile, on the other side of the battlefield, Major Bola's T-34s formed up for battle in the trees along the stream opposite the Uwanda left.  The Mugabian infantry would wait until the T-34s began their advance,  then move forward through the farm opposite the Uwandan right.﻿

Mugabian T34s prepare for the attack.

T-34s erupted from the woods, and immediately, the Centurions unleashed their 20PDRs.  T-34s exploded, while their shells either missed or bounced off of the Centurion's thick hide.  Major Bola maintained control over his rapidly diminishing force, while mortars were called in on the Uwandan  armor.

The T34s take a beating from the Uwandan Centurions. 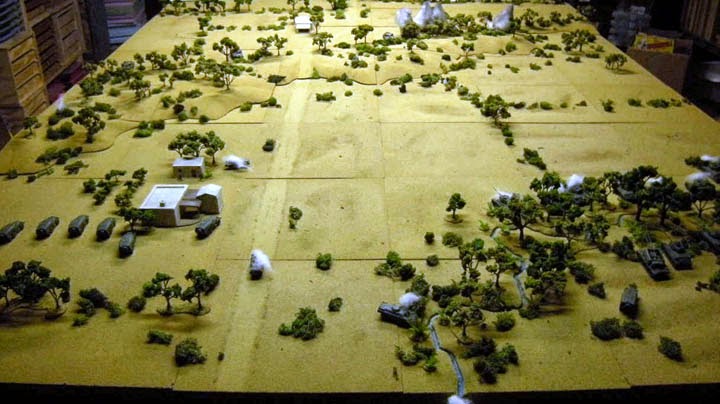 T-34s burn to the right, while serious hurt is about to descend on the infantry
advancing in BTR-152s to the left.  Mugabian mortar strikes can be seen in the distance.
After a very brief and furious exchange, only two command tanks remained alive, afforded cover by trees and burning T-34s.  The mortars damaged a Centurion and destroyed a Saladin, but had no effect on the outcome of the battle.  The Centurions refocused their attention to the Mugabian infantry to the southeast, adding their fire to that of the Saladins. 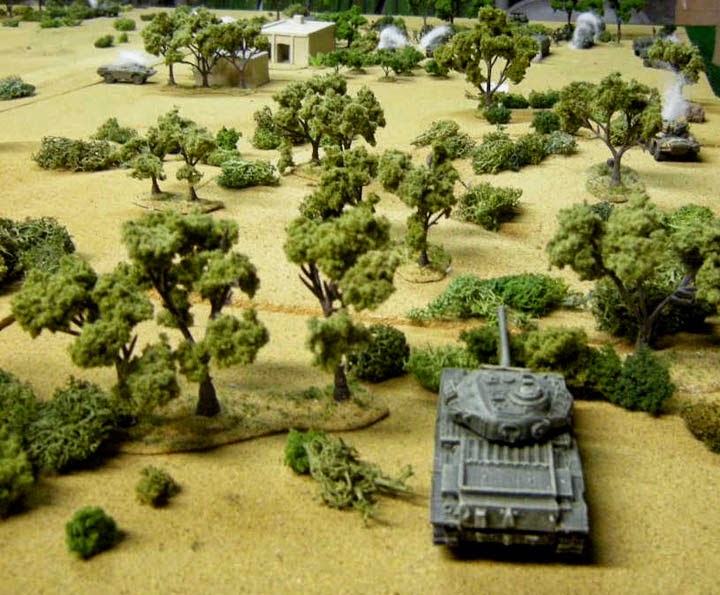 A Centurion's view of the Mugabian infantry advance.

With the T-34s no longer distracting the Uwandan forces, the Mugabian infantry were rapidly demolished, having little cover and no long range anti-tank weapons.  Command failed to maintain order, and the attack turned into retreat .  Major Bola regained some order, eventually halting the fleeing troops, but the battle was badly lost. 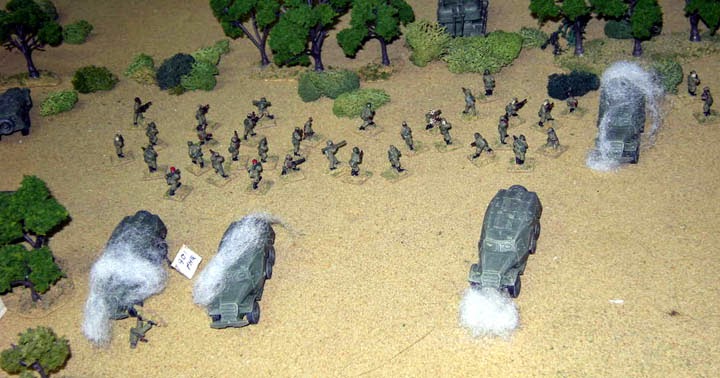 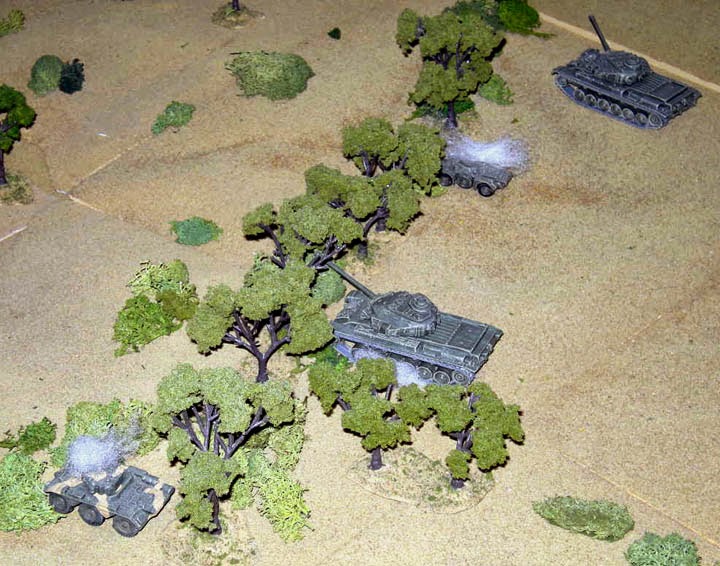 Most of Uwanda's losses are depicted in this photo.


Though this had been the biggest battle of Major Bola's life, a bigger battle for his life was about to begin. His lingering thought was," How could we lose so completely, so quickly?  Do I even deserve to live?"

This battle was the last of four failures for Mugabia on this day.   The President would not be happy, and if the President was not happy, no one would be happy.

This battle was over almost before it started.  I had no expectation that the T-34/85s could be so out-classed by the Centurions, but they were.  Additionally, the Mugabian attack originally involved air-support, which was lost prior to the land battle taking place.

As it was, two thirds of the Uwandan force never made it onto the table, and my elaborate plans to have a "rolling" battlefield, where I added terrain to the west end and slid the entire tabletop to the east was a waste of time.

Losses were as follows:

Now the "Fate Tables" (directing political and popular unrest) will be consulted to determine how the defeats will impact the politics and further actions of the armies.  This could get real interesting.