Vallejo (and Other Paint) Observations (and Frustrations)

So I guess this all stems back to 1983, when I started using ModelMaster enamel paints on micro-armor.  Somewhere around 1994 I noticed that my Soviet tanks, all painted Medium Green, were nearly as many shades of green as I had Russian tanks.   The colors were everywhere, some colder, some warmer, some darker, some lighter, again, all painted the "same" color, ModelMaster Medium Green.  I was quite surprised at ModelMasters quality control, or lack there of.

Not too long after that, Vallejo paints made their way onto my paint bench, and I switched over to 894 Russian Green.  It was reasonably close to some of my earliest MM medium green tanks, and I just went with it, without much concern for the overall accuracy of the color.  What I wanted was consistency, with the expectation that I could match the color from the same manufacturer 5, 10, or 20 years down the road.

Now this was naive of me, as I had already seen the disappearance of the Polly-S, Humbrol, and Pactra's Military lines of paints, but I was still young enough (and hopeful enough), that I expected some stability in the product lines.

I never used many of the old Humbrol's, and only a selection of the Pactra Military's, more of a loss was the transition of Polly-S to Polly Scale.  At least there, colors were still available in some cases (I just used up the last of my Polly-S Light Yellow about two weeks ago).  There was more frustration over the Polly-S change, but the ModelMaster inconsistency really caught me by surprise, so I went heavy into Vallejo after giving it the initial try, and reading a lot of good stuff about it.

Flash twenty some odd years later, and I find myself in a similar situation with Vallejo.  It started a couple of years (or so) back, when I discovered that my 894 Russian Green, had become 894 Cam. Olive Green with a slight change in color.  More recently, I've noticed a bunch of changes if names and/or colors, which I'm guessing has been all over the model forum for some time, but I don't frequent any of those, so I'm whining about it here.

Earlier this year, I had trouble finding a new bottle of Vallejo 887 Brown Violet, after some time, my local shop finally got in some new bottles of 887 US Olive Drab.  The color seemed to match pretty well when dry, just the name was particularly different.

More recently, I changed over to newer bottles of 890 Reflective Green and  892 Yellow Olive, neither of which changed names, but the colors are noticeably different.  One bottle of Reflective Green is much yellower than the other, and the same is true of the Yellow Olive.  The last of the recent bunch is 889 Olive Drab, which is now 889 Olive Brown and is much darker and less green.

I remember years ago on TMP, when during a discussion about how many paints we had (many were in the 100s of bottles), member Scurvy Bartella made a comment that he had relatively few paints, and basically that we all needed to learn to mix colors.  At that time, I often added figures 5, 10, 15 years after painting the original figs for an army, sometimes many hundreds of figs (multiple times even), and preferred being able to save time and match from a bottle, whenever possible.  It is faster and more convenient.  To me, this didn't seem like an outrageous request or expectation.

ModelMaster's pseudo demise with the sale to Rustoleum (who I have been in touch with, and who doesn't seem to know what it is doing), has been frustrating as I depended on the enamels for specific applications, where acrylics were less favorable, or not well suited.  This has also increased my dependence on Vallejo, which now seems to be in the same boat as the other hobby paints before them.

I know that there are other brands out there, but my needs are such that the internet isn't fast enough, particularly with respect to work projects, where something comes to me in the morning, and has to leave that afternoon.  It is equally frustrating with respect to hobby projects, as I usually find that I have hobby time, at the moment that I find myself with hobby time.

Not sure what I'm going to do at the moment.  The local shop invested in a Vallejo rack, but has had trouble getting new stock  almost since the day they bought the rack.  I hate to drop the line from use, and turn my back on the local guy, but not being able to depend on consistency and availability is a problem for me, both personally and professionally.

I'm considering switching to a line that I have to order over the net in hopes of relieving the consistency problem, but that will increase the availability problem.    I find it funny in the age of technology and instantaneous gratification that I have a much harder time finding paint, glues, brushes, plastics and virtually all sorts of hobby supplies, than at any time since the late 1970s.

Anyway, here are a few pics of the bottles, showing the differences.

887 Uesd to be Brown Violet

The Change to Olive Brown and
difference in 894, formerly
Russian Green

And on a side note, I did mange to paint 119 stands of 6mm US Cold War infantry this weekend.  Cold War progress continues.

It's funny how it comes and goes; for weeks I get almost nothing done, then this past weekend,  I painted 272 stands of 6mm infantry.   Soviets, spanning the 1958-1982 time frame.  Not much to look at, but amounts to about a third of the Cold War infantry that I yet needed to paint. 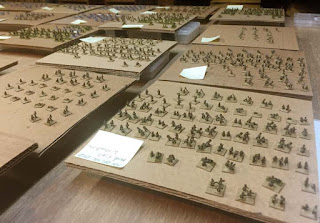 They still need flocked, but the paint is done on them.  Next will be East Germans, then US forces, the next largest group of figs.
Posted by irishserb at 3:36 AM 5 comments:

Yup, took me four weeks to paint six figures.  At this rate, I only need 220 or so more years of lock-down to finish my figs.

Anyway, here's what I got, a few figs from another post apocalypse faction, "Mama's Crew".   Mama runs a farm, and along with a few women of the wastes, takes care of some children of the wastes.  You'll be seeing more of her in the future. 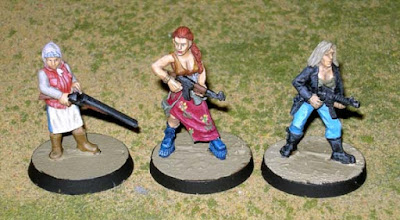 Top photo above, "Mama" (the first fig) is "Madge" from Hasslefree, and the other two are are from Brigade Games Post Apoc line, I think named "Helga" and Poppet".

Bottom photo, the first two are also from Brigade Games, and the last is a Hasslefree fig I believe.

And here are the kids:

There were painted sometime back, the first four are from Hasslefree, the last from Leading Edge, I think.

Now I need to grow some miniature crops.
Posted by irishserb at 11:52 AM 2 comments: