Earlier this year, I managed to make it to Origins for part of a day, but was really struggling with an ailment, so didn't stay too long.  Despite being pre-registered there was still a significant wait to get in.  I did manage to get through the dealer room and reinforced Star Fleet and the Klingon Empire a little, courtesy of Lou Zocchi's fine starship models.

In all, I picked up three Klingon D7 cruisers, seven Federations ships (a mix of scouts, heavy cruisers, dreadnoughts, and a tug) and some decals. I had been concerned that these might no longer be available (and even read as much this past weekend), but need not have worried, as there were plenty to be had.

I had hoped to pick up some other stuff too, but Reaper didn't bring their metal figs (I'm not a big fan of the "Bones" casting material), and a couple others sold out of things that I was wanting, so didn't spend as much as I might have.

There is always a lot of neat stuff to see there, though I wish miniatures had a greater presence.

Anyway, here are pix of a couple of the ships: 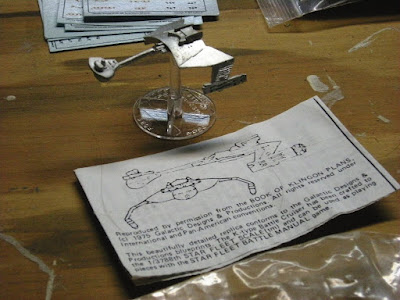 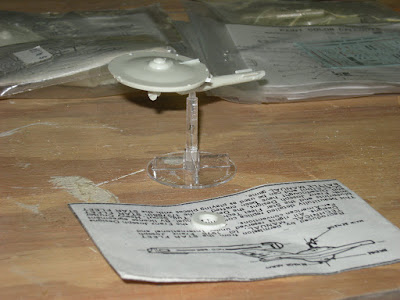 My first Federation Scout.
All of the Federation ships are multi-piece plastic kits; the Klingon and Romulan ships are both one piece metal castings.  All are very nice quality.  In addition to the ships, he sells decal sets and has a huge range of ship names for the Federation vessels.
I'm going to paint the Federation ships in the color from TOS.  I'll be working on these in the near future and will share some pix of them painted, probably around Christmas.
﻿
Posted by irishserb at 6:11 PM