AAR23: Lessons in the Air

Before the two F5As downed the Migs 15s, they were aware of other Mugabian aircraft that were inbound.  In a few minutes, they sighted two Mig17s at about four miles, slightly below.  The Migs apparently sited the F5s shortly after and adjusted their course. 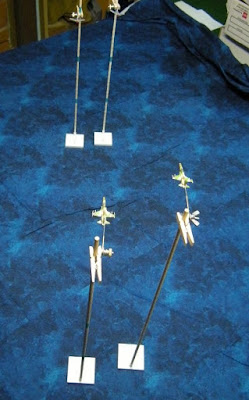 Near the beginning of the dogfight,
the F5s would veer right and climb.

The F5s began to climb, again hoping to use altitude and speed as an advantage.  Meanwhile, two Mig21s on the deck, looped to the south.  The F5s and Mig17s closed with each other, with the F5s hoping to out climb the Migs and deny them shots.  The F5s didn't quite make it as the Migs lined up two consecutive deflection shots that failed to strike home. 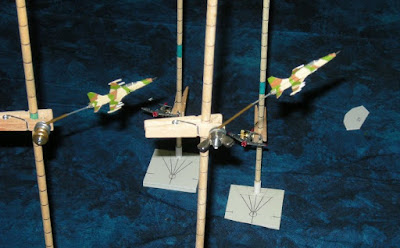 Despite the F5s best effort, the Migs still get shots.


To the south, the Mig21s began to climb.  The Mig17s and F5s continued their encounter with the Migs again lining up shots and getting light damage, but just enough for a critical hit.  The result: engine out.  Though the F5 would escape the dogfight in the air, it would not make it home. 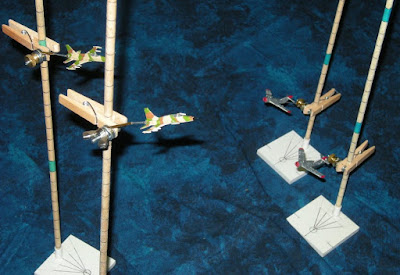 The Migs getting shots for 4 consecutive impulses,
result in the trailing F5 losing its engine.

The Mig21s, still nearly seven miles away, were able to site the fur-ball, but could do nothing about it.  Meanwhile the 1st Mig17 fired its last ammunition, scoring only a light hit and no damage on the F5.

Now it was the F5's turn to shoot, and it scored a moderate hit that resulted in engine damage and seven turns of power for the first Mig17.  The Migs split in opposite directions, and the F5 fired its last burst scoring enough damage to cause an engine failure in the second Mig.  Two quick kills for the remaining F5. 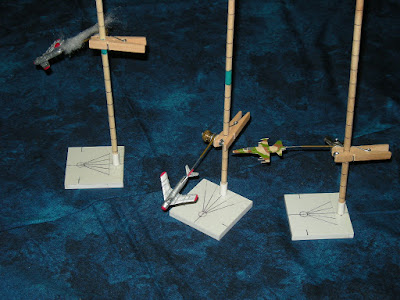 One Mig trailing smoke and fleeing, the second Mig takes a hit.

Unfortunately, with no missiles or ammo left, the F5 was forced to return to base, yielding control of the sky over Objective B21 to the Mugabian Mig 21s that were soon to arrive.

Total air losses for the first day of the invasion:

I still haven't figured out how to negate the advantage of the Russian guns.  Trying to dance the F5s around at the edges of Mig gun range, waiting for a Mig mistake did not work well.  Mostly it has resulted in costly mistakes by the F5s.  Similarly, trying to make higher speed diving passes, particularly at the Mig17s hasn't worked either.  The Migs17 turn fast enough to get shots as well, and if they hit, their long range high deflection shots do as much or more damage than solid medium range hits with the F5s 20mm.

The only good thing is that the Soviet built planes don't have a lot of ammo, so not so many shots, their western counterparts having almost twice as many shots. The Migs also seem to roll dice better.  Similarly, I have no solution for that either.

The mechanics of the game seem to work, though there are still a bunch of things relating to energy loss that I haven't incorporated yet.  But I'm not really sure if this is a success.  I have managed to get the dogfights onto the table, but there is still a lot of mapping involved in getting the planes onto the table, even after the tactical situation has materialized (more than I would like).

I'm going to continue with it for awhile, see if I can refine it to be more of what I'm looking for.  But I may well end up falling back on one of the published rule sets for longer ranged fights with missiles.

Though this last portion of the air battle over B21 ended in Uwanda's favor, things have not gone well overall in the air.  The ground battle was lost by the time the Mig21s arrived to control the air, so their arrival afforded no benefit to Mugabia, other than making a few Uwandans uncomfortable.

AAR23 concludes the battles of the first strategic turn of Uwanda's invasion of Mugabia.

I have played out the next strategic turn, which has yielded five ground battles and three air encounters.

I've been working on new 15mm masters, molds and casting.  I am focusing on that at the moment, so there will be a little break before the next set of AARs.
Posted by irishserb at 4:50 AM