I've been looking for some 1/43-ish light military vehicles for my post apoc bunker faction for a few months now, something along the lines of Humvees or M-ATVs.  Unfortunately, pretty much all that I found were collectors diecasts in the $30-70 dollar range and Humvee kits at around $25 a pop.  I was hoping for something a bit less expensive, as I wanted 2-3 of them.

By chance, I found some diecast GAZ TIGRs at a grocery store a couple of weeks back for about $6 each in roughly 1/48th scale.  They are actually reasonably detailed models, and the front doors open.

For now, I took two of them, diassembled them and drilled out the roof hatch to receive small turret with opening hatches. I plan a few additional modifications, before re-painting them.  Here are a couple of WIPs: 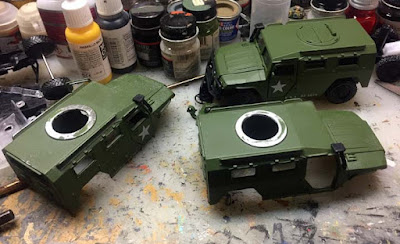 With the diecast roof hatchs drilled out and filed. 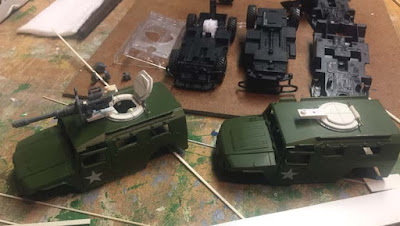 With new hatches in process.

The plan is that one will have a light auto-cannon, in this case a modified GW Cadian heavy weapon, and the other will have a lighter weapon of some sort, maybe a sort of machinegun laser.  Otherwise, they will get some solar panels to recharge their batteries,  rear bumpers, some stowage, etc.

I'm hoping to get paint on them by next weekend.

Posted by irishserb at 6:52 PM