My hobby time has really diminished over the last couple of weeks. I'm still piddling along with the 1/72 Vietnam aircraft, and am surprised at how much time I've spent making truly unremarkable models.  They will be fine for gaming though.

The canopy for my OV-10 ended up being a disaster.  The side glass was warped, and and in trying to get the parts to fit, I managed to craze the plastic through bending, and then got solvent in spots that clouded the clear plastic as well.  I tried polishing it our with Brasso, which helped some, but wasn't going to remove all of the mess, and gave up on saving the clear canopy.  So frustrated, I briefly considered just tossing the whole thing out, but after a couple of days, painted it blue instead.  It looks like crap, but it is functional.  Here's a pic: 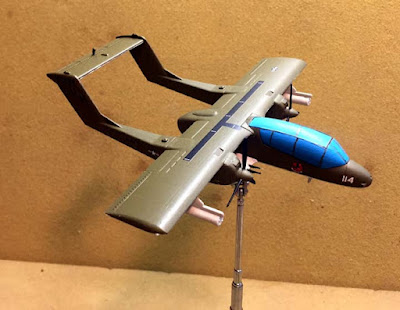 I also got the glass into the pair of UH-1B gunships.  They came out a little better: 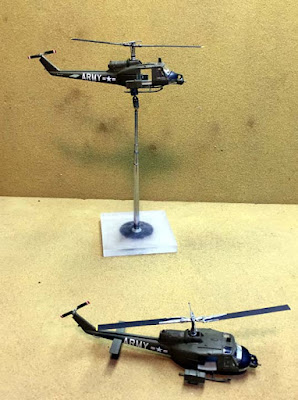 A pair of UH-1B Gunships 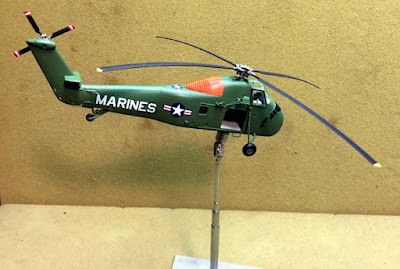 Sometime back, I tried using magnets on my 1/100 scale African planes for mounting to aircraft stands, but when one of my boxes tipped over, I ended up with several 1/100 scale  models being attached at the magnets.  I lucked out and only a couple of scuffs and scrapes resulted, but decided to mount nails in my models in the future and leave the magnets in the stands.

I made a prototype stand for Vietnam, using a 4" square base base, but discovered that the 4"  base is overkill relative to the weight of the models, so cut a couple more 3" square bases.

The stand is made of a telescoping magnet tool, mounted to a weighted plastic base.  The base consists of two pieces of 1/4 inch plexiglass/acrylic solvent welded together.  The top piece is center drilled for a screw to pass through, that threads into the end of the magnet tool (you can unscrew the end of the magnet tool, and remove the pocket clip).  I replaced the original screw in the tool with a slightly longer one to accommodate the thickness of the plastic base.  The bottom layer has a big hole milled out with a Dremmel.  Once the two pieces are fused together, the magnet tool is screwed into place, a ring of tubing is cut and glued in place to protect the screw head, and lead shot is superglued in place to fill the the hole in the second plate, giving the base enough heft to secure larger aircraft when the tool is extended. 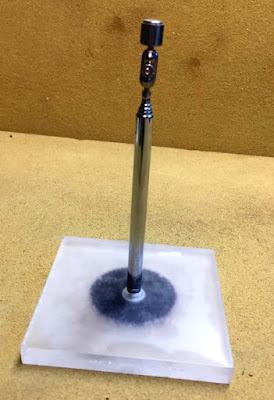 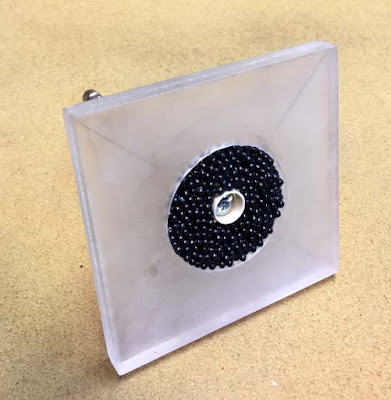 Underside of the base, showing the shot and plastic ring
protecting the screw head. 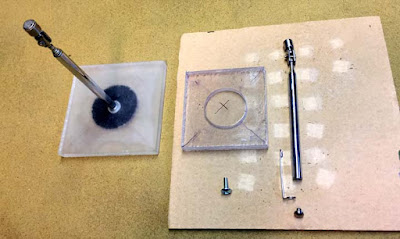 New stand with parts for the 3" square based stand.

My original stands had "x" shaped bases to more readily fit in between terrain pieces, but this turned out to be more work than it was worth, so I've gone with square bases for the newer stands. 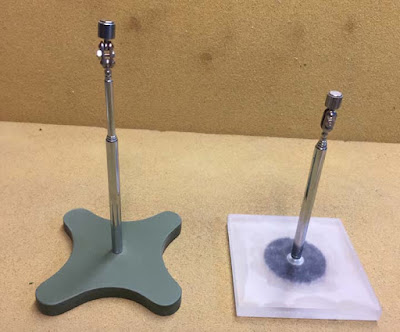 My original "x" stand with the newer 4" square based stand.
I'm making progress.  Though at this rate, I'll be finished with these some time next year.
Posted by irishserb at 8:28 PM