Over the last few days, I've gotten back into the swing of things, completing some of the QRF 15mm Cold War vehicles that I received a few weeks back.  Paint jobs are basic solid green, grey tracks and some dirt and dust, but they are table ready.

The models are cleanly cast, and fit together nicely.  They have a rather clean look, but at the same time are nicely detailed.  Here are a few pics: 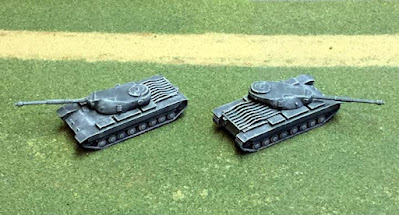 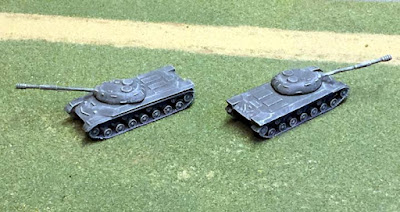 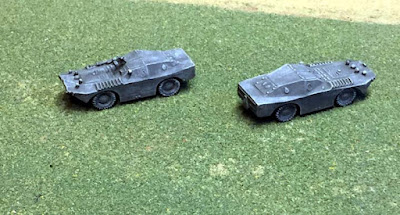 The BRDM1s, are cleanly cast and easy to assemble with nice detailing, though I am a little suspect at the proportions.   I haven't checked the dimensions, but they look a little stretched in length to me.  One of the machineguns was damaged during shipping and was unusable, another has vanished somewhere on my basement floor, so only the platoon leader has the external machinegun mounted.

I also painted a single Bedford RL truck.  The cab took a little extra clean-up, but is not bad by any means, the window pillars just need to be positioned just right, and mine were bent a little from transit.   Again, I think it makes for a rather nice model. Unfortunately, the individual pic was blurry, so here it is in a group shot with all of the models from this batch.

I probably can use Bedford trucks more than heavy tanks, but I just couldn't resist the lure of the heavies.

After nearly five months , I can finally check something off the to-do list.

Posted by irishserb at 2:14 PM

View my complete profile
Welcome to my Blog. Here I will babble endlessly about my Colonial era to Far Future gaming interests. Current hot projects are; 6 and 15mm Cold War Hot: 1958, and 15mm African imagi-nation Battles