6mm British, French, and German Infantry for 1940 (and Then Some)

A couple of weekends back, while paint was drying on my 20mm rice paddies, I finally started work on my 1940 6mm infantry.  I already had a fair number infantry painted, some dating back about 30 years, but missing some command, support weapons, etc., such that I could not field a complete company of anything.

Earlier this year, I placed a large infantry order with H&R, and I finally sorted and based them.  For the British, I  had enough troops to also base some units for 1944-45, and for the Germans, enough figs for some mid-war units for Russia.  More recently, French figs arrived from GHQ.

US, Soviet, and late war Germans will come later this year to be added to the US and Soviet figs that  already have.

I'm still hurting for a source for French bicycle and motorcycle troops, as I can't find sources, with the exception of possibly using German motorcycles as stand-ins.

Paint choices have been a struggle, particularly with the British, as the paint I used previously  was from the old Pactra line,  is too green and long gone.

The British problem: Everywhere I look, the recommended color is distinctly brown, as opposed to a greenish color.  But, I've surveyed  collections of over 25 British uniforms or blouses from the period, and despite everything on the internet telling me the uniforms should be a brown, 84 percent of what I've seen look green(ish) to me.  These are all British issue, not Canadian or something other that would be more green.

Now, they aren't by any means a New York Jets sort of screamin' kelly green or anything, they are all a brown green, but lean to the green more than the brown, and otherwise are not close to say, Vallejo English Uniform.  A small number of the items that I saw were closer to the brown, but we are talking roughly 1 in 7 examples.

In looking at color period photos, I find a much higher percentage of brown uniforms, but it was still closer to 50/50, and many of the photos have a distincly brown cast to them, leading me to think that some of the brown uniforms may be less so, than they appear in the photos.

The second British problem:  I have a lot of British that were already painted, about three company's worth of figs in the old Pactra color, maybe a little less green than Vallejo Refractive Green.  Clearly wrong, but so many figs.  I feel goofy painting new figs the wrong color, but have this nostalgic thing about the old figs, plus, don't want to spend the time repainting them.

The British compromise:  I decided to put old green figs in 1940 units, painting the small number of new figs filling out their ranks to match the old figs, and repaint the remainder of old figs scattered among the later war figs a more "accurate color", consisting of a mix of Vallejo British Uniform and Refractive green.

My survey may involve too small a sampling, or just be anomalous in some other way, but this mix seems to more realistically represent what I've seen. 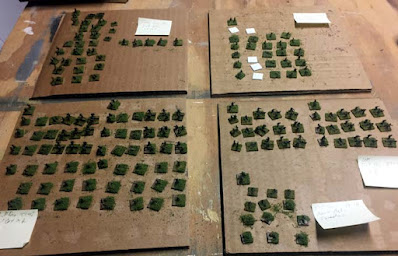 My British figs as in their current state of paint.

My Germans were largely painted somewhere between 1987 and 1991 with a ModelMaster gray.  I think it might be Gunship gray (haven't actually verified the color yet).  Regardless, I can either match the old color, or I can repaint the old ones, and add the new figs all with "proper" colors.

In retrospect, I didn't have as many painted Germans as I had remembered, and didn't have any complete German units at company level, missing command, anti-tank, or supporting weapons stands throughout, so I think everything will get new paint. 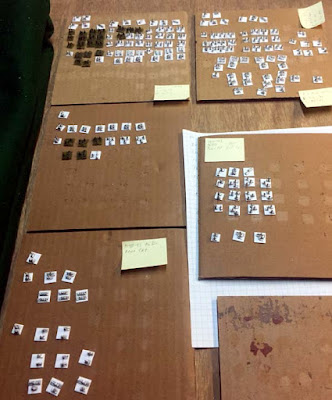 My French were painted more recently (i.e., not much nostalgia for them), and are too light and too green. I don't have a ton of French troops painted, and since they were never flocked, they will be easy to repaint.

After looking at examples on the internet, in books, and at a couple actual in person uniform examples, I am left with a similar view towards the French uniforms, as the British.  They were frequently more green and less brown than most hobbyists and/or hobby sources suggest.

Again, not that they were overly green, but I would describe them as generally being a yellow-brown-green.  I have seen some that were more brown, leaning more toward a yellow brown, than a red-brown, but brown is a distinct minority.

I haven't completely settled on colors yet, but will likely start with Vallejo Green Brown 879 and tweak it a little, with Olive Grey 888 for the helmets, and maybe a tweaked Yellow Green 881 for the canvas bits. 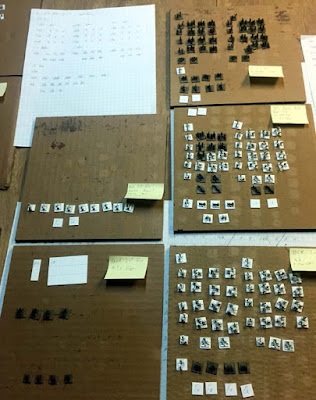 The recently based French troops.

In any event, two weeks into it, the British are painted and in the process of receiving flock, and the French and German figs are mounted on bases, and awaiting their turn under the the brush.

Posted by irishserb at 8:01 AM