I have a backlog of things to share, but have been too busy between work and painting figs to get the figures and photos done.

Over the last six weeks, we have gotten together three times, fighting out our big Hydran/Lyran battle for our Star Fleet Battles campaign.  We've played 7 turns in about 11 hours of gaming thus far, and probably have another 3-4 turns to go.  Space has been filled with mines, making the going a bit tedious.  Oh, and it doesn't look good, for the Lyrans at this point.  I'll finish writing it up once we complete the battle. 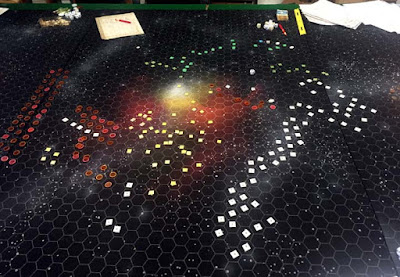 My painting table has a constant flow of roughly 100 6mm Cold war vehicles moving across it.  I got into full swing, completing just over 650 miniatures in August (over a 1000 on the year!!).  I'm down to about 200 to go, plus another 200 on order, and then there is maybe 100 aircraft and a gazillion infantry stands to complete.  I'm almost done. 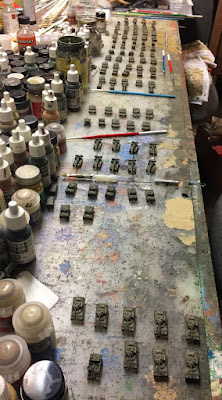 All other projects have gone on hold, even my African buildings have finally been bumped, though I only need to complete maybe 8 more to get on with the Uwanda-Mugabia War.

Work should slow down in September, allowing me to share more new Cold War arrivals and whatnot.
Posted by irishserb at 6:42 AM