We started out today.  Drove east on the old highway for awhile, then veered slightly north cross country. Ran into a radiation zone, and then spent half the day working our way around it.  Scared the bejesus out of me when the alarm went off; everything was so peaceful. 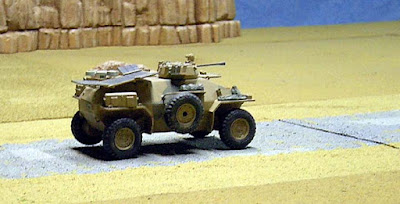 Bumped into a few small settlements, and talked to some people about the Confederation.  Got shot at by some others, but just warning shots.  Can't really blame 'em though, people gotta be careful livin' out on their own like that, and most people never seen nothin' like the Goat. Gotta be kinda scary seein' it come out of the wastes.

In the evenin', we stopped while we still had some light.  Recharged the batteries a little, while Panky fiddled with the drone.  Noticed Sam writin' in a book, but when I asked her 'bout it, she just said it was personal, and put it away.  I keep my own thoughts in a journal, I understood.

After squarin' away things on the Goat, I wondered around a bit.  Didn't find much of interest, just basically looked like things do back at home. Dust and rocks. Yellow and Brown.  It was getting dark, so I got back to the Goat.  Took the first evening watch.  Just me and the stars. 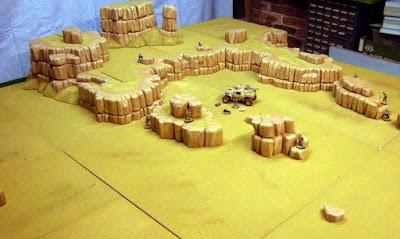 Lots of excitement, followed by lots of boredom today.  Stumbled into a gang waitin' in ambush.  Panky was fiddling with the drone; it wasn't working right, and I was down looking for a screw she dropped on the floor of the Goat.  And... SURPRISE!  A voice calls out, "Don't nobody move!" 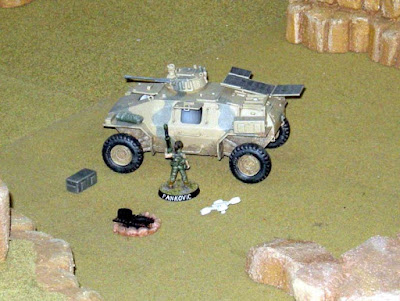 Panky talking to Charlie inside through the hatch.
A voice calls out behind her.

They were waiting in the rocks, had a good set-up too, just caught more than they could handle.  Some looked more like soldiers, than the usual gang.  Had some interesting weapons too.  Gangs don't usually have las-rifles, no way to re-charge them out in the wastes.  So, pretty strange. 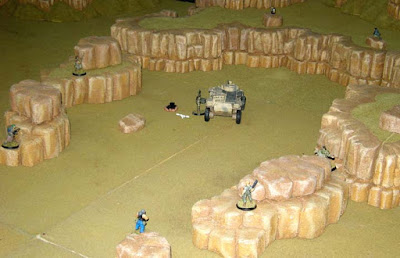 Shooting starts, but nobody can hit anything. 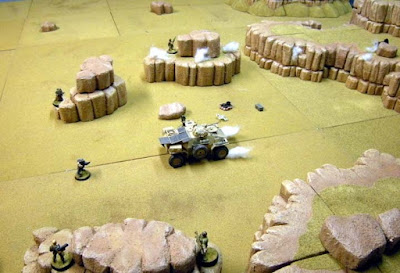 The Goat is backing, Charlie finally hits a guy up front on the
cliff with the autocannon.  Shots going everywhere.

As soon as the ambush started, Panky rolled under the Goat and returned fire. I slewed the turret around, and mostly just laid down a suppressive fire.  Panky climb onto the Goat, firing wildly as she hung on, and Sam got us out the way we came in.  They tried to close the gate behind us, but weren't really prepared fort he Goat, so couldn't keep us locked in.  One of the kills was Sam runnin' over a dude.  Afterward, she said she always feels bad about road kills. 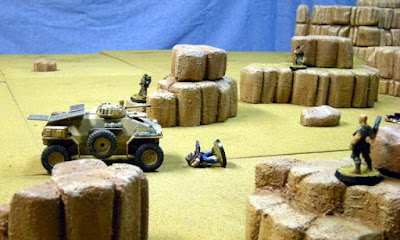 Roadkill, now in front of the backing Goat.
Las-guns hit the left side of the Goat.

Got pretty nasty for a few minutes, but the goat saved us again.  We killed a couple of them, and are real lucky they didn't pick-off Panky standing outside the vehicle like that with the drone. 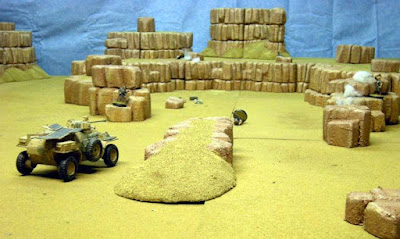 The Goat backing away, now spraying the rocks to the right with fire.

Funny part is that we left the drone sittin' there, but before they got to it, Panky started it up, and was able to fly it back to us.  The bad guys took a few shots at it, but luckily missed. 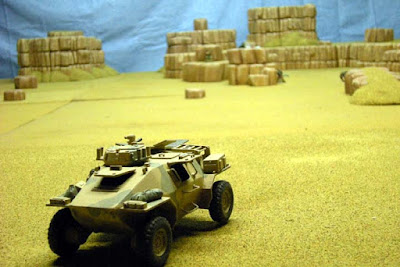 The Goat speeding away from the ambush.

Panky was pretty mad about us getting caught flat-footed like that.  Said that it ain't happenin' again.  Not sure if we really would have been better off, if we had set a watch.  I'm thinkin' we would have all just been overrun outside the Goat.  But I understand why she's mad.

Country still looks pretty much like home. Dust and rock and all.
Posted by irishserb at 5:36 PM