The battle for Objective 41 marked the point of the last significant Mugabian resistance before Uwanda made a run the enemy capitol.  If the force at Objective 41 were destroyed, there would be only the Mugabian Presidential Guard left to protect Mugabia, a well equipped, but untested force. 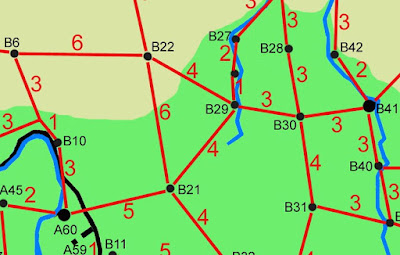 Uwanda had been aware of near involvement by Cuban forces on at least two prior occasions, and their presence at Objective 41 caused no great concern.  Uwanda knew that the Cubans would significantly strengthen the Mugabian defense, but it was believed that Uwanda's air power could overcome any advantage offered by the Cubans. 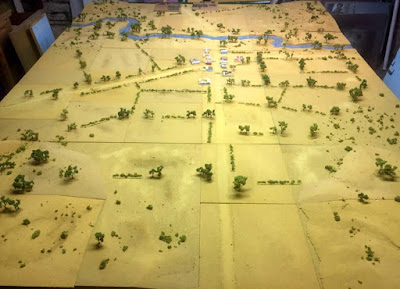 Uwanda's view of the battlefield looking east.  Uwanda's main
force attacks from the rise lower right, with a second force
entering on the road. 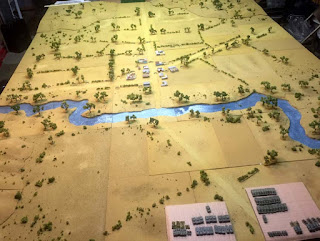 Mugabia deployed its infantry in multiple layers of defense, again hoping to draw Uwanda into a soldiers' fight.  Once the Cubans arrived, their forces were worked in to offer overlapping fields of fire and standoff capability against the long ranged Uwandan armor. 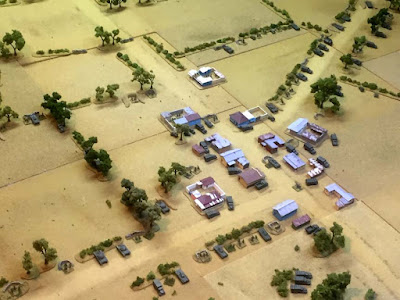 Mugabian forces deployed in and around the town.

A Strikmaster flew over Mugabian forces prior to the attack, spotting some of the enemy positions and noting the Cuban armor.  Mugabian AA guns opened up on the intruding aircraft with no effect.

The Uwandans scouts advanced from the high ground southwest of the village, spotting the leading edge of Mugabian forces after some effort.  The Uwandan main force advanced in two groups, the first on the same high ground as the scouts, and a second force consisting of Firefly tanks and Saracen APCs coming up the road, then shifting south to join the attack to the south of the village.

The Uwandans hoped to get a concentration of fire, allowing them to quickly overrun the southern forces and then turn north against the remaining enemy forces.  Vickers tanks would offer an over-watch from the high ground with their 105mm guns, while the infantry supported by Fireflies at closer range would churn through the Mugabians.

As firing began, BMPs in hull down positions engaged Vickers tanks with Sagger ATGMS, killing two in the first volley, then adding more as Mugabian heavy mortars offered some cover to the BMPs. 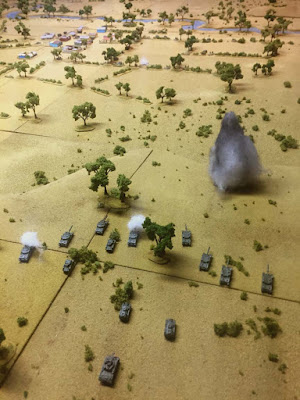 The fight begins as BMP1s open up with their Sagger ATGMs

The advance was not moving forward as favorably as expected, so Strikemasters were called on earlier than intended to keep the northern Mugabian forces honest, and inflict some damage.  Uwanda's second force pushed up the road, eventually taking a few long range losses to Saggers and T-55 cannon fire. 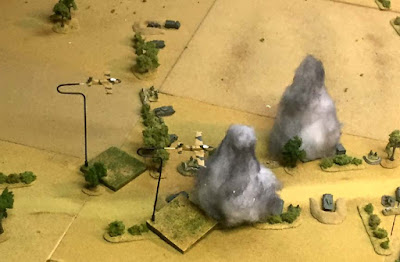 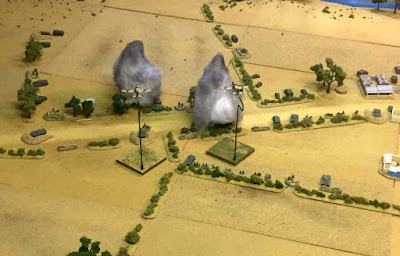 The Uwandan's on the high ground advanced, exchanging fire with the BMPs, one of which was knocked out early.  The others survived due to their hull-down positions exposing little of the vehicles to enemy fire.

As the Vickers tanks took losses on the high ground, the Fireflies began taking fire on the road, forcing them to move off-road to the south.  As they advanced, they continued to take some fire from the north side of the road, both from T55s, and BMPs.  Additionally, they started taking fire from the southern portion of the enemy forces. 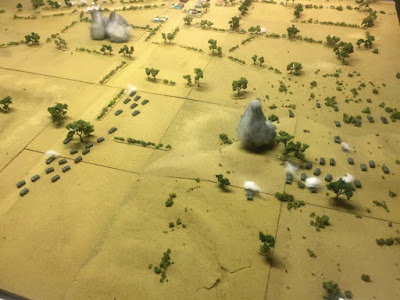 Both of Uwanda's forces taking more damage than they were dishing out.

The Fireflies attempted to return fire, but were at the limits of their range, and couldn't penetrate the thick hides of the T55s , even when they did score hits. 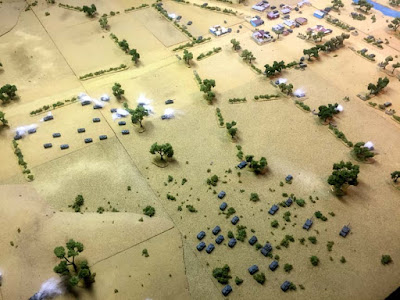 The Fireflies finally score a couple of hits, but have taken a beating.
Uwana's southern force has almost advanced enough to dismount infantry.

All the while, the ground forces were repeatedly supported by the eight Strikemasters assigned to the battle.  Unfortunately for the Uwandan forces, the jets failed to inflict much damage with their bombs, failing on at least five occasions to have any effect on T55s within the blast of well placed bombs.

Uwandan morale remained strong despite the losses, and in time the southern Uwandan force scored enough hits on infantry and BMPs to force the first line of Mugabian defense to fall back.   This ultimately worked againstf the Uwandans, as they simply took more losses before morale failed, and the withdraw took place. 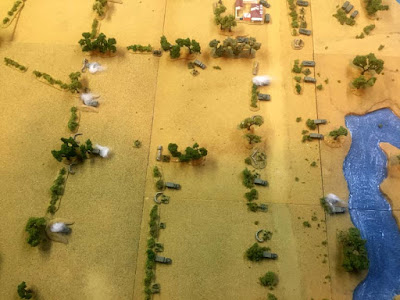 Mugabians falling back to their next line of defense.

By this time the withdrawing Uwandans were starting to be flanked from the north, with no Fireflies remaining, the northern-most infantry company continued to take losses; while, the southern withdrawal was covered to some extent by the Vickers Mk. IIIs.  The southern force was continuously harassed by heavy mortar fire, though took no additional losses. 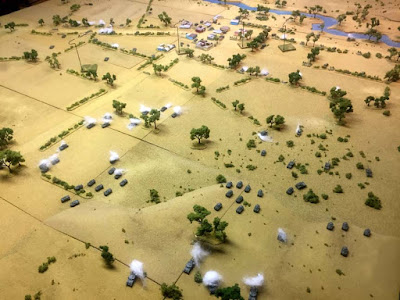 Uwanda's last action was to send in a flight of four Strikemasters, in which three well placed bombs destroyed a single squad of infantry, and a second Strikemaster was shot down by Mugabin AA guns. 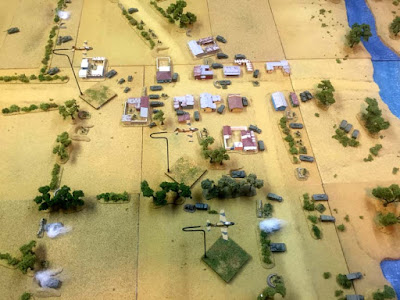 Uwanda's last gasp, Strikemasters trying to cover the withdrawal
of their counterparts on the ground.

The results of this battle are not a great surprise, though the lack of damage inflicted by the Strikemasters was somewhat less than I anticipated.  I expected that the Fireflies would find themselves at a terrible disadvantage, and they did.  And the Vickers' thin armor was exposed, not that any other tank of the era would stand up well to the Saggers, but they didn't stand up to the T55s either.  The advantage of their long range 105mm guns was negated by the fact that they could not see their enemy at long enough range to take advantage of it.

In retrospect, if the Uwandan forces had attacked from the high ground to the northwest of the town, they would have probably made better use of their longer ranged guns, but I found the idea of closing over that open ground with the Uwandan infantry too intimidating,  allowing myself to overly influenced by the inability to bring them into action in earlier battles.

The Saggers were a problem that the Uwandans had no answer for, and their forces carry no equivalent weapon.  The largest remaining Muganian force is the Presidential Guard, which features many T55s, and though it doesn't have BMP1s, it is equipped with BRDMs with Saggers.

In any event, an interesting point has been reached in the conflict, and I'm not sure where it will go from here, Time to consult the the dice.
Posted by irishserb at 7:05 AM

Welcome to my Blog. Here I will babble endlessly about my Colonial era to Sci-fi gaming interests. Current hot projects are: