A couple of weeks ago, we got together and finally completed strategic turn 8 in our Star Fleet Battles campaign.  Despite the passing of many months, relatively little happened during this turn.

There was a lot of Klingon and Lyran movement, though only a single battle at the Kzinti battle station in hex 0701, which yielded little surprise.  A 14 ship Lyran task force featuring  a battle tug, battlecruiser,  four heavy cruisers and their escorts managed to destroy an undefended Kzinti station without any losses. 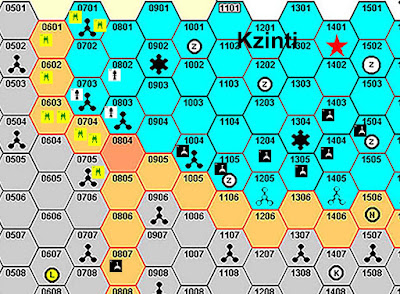 Lyran space is to the left, Klingon to the south.  Kzinti fleets
are represented by the white markers, Lyran by yellow, and Klingon
by black.  The Kzinti have lost two planets and two battle stations
to the Klingons thus far. 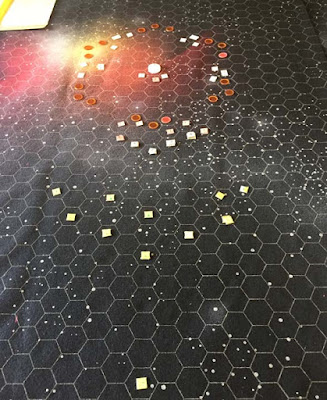 The battle on the tactical map, with markers, rather than miniatures, unfortunately.
The Kzinti battle-station is represented by the large marker, surrounded
by a minefield.  The attacking Lyrans are in the foreground.
The Lyrans took three turns to destroy the bae's fighters and
pound it to death with disruptors and phasers.


Otherwise, the Klingons advanced further into Kzinti space, and moved into Hydran space.  The Hydrans and Kzintis in Lyran space continued to move toward a rendezvous, and Lyran forces continue to consolidate for a big event in hex 0710. 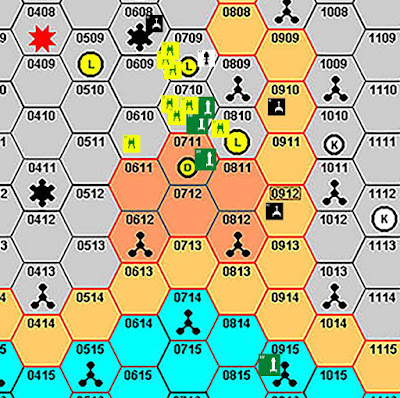 Hydran space is the blue toward the bottom, Lyran to the left,
Klingon to the right.  the green markers are the Hydrans,
which actually out-number and out-gun the Lyrans.

The Kzinti are clearly in trouble as all of Kzinti space is probably defended by fewer than a dozen ships at this point.

Similarly, the Lyrans look to have a problem in the southern portion of their territory, and they can almost match numbers, but not nearly the size of the Hydran ships.  Some very curious situations could develop between the Lyrans and Klingons, depending on how the battle at Hex 0710 turn out.

Posted by irishserb at 7:02 PM