As Uwanda's second attack on objective B-15 began, Mugabian reinforcements started their advance to B-15 as well.  The reinforcements quickly got word that the attack had begun, and that they could not possibly get there in time to help.

Later, the reinforcements did link up with the Mugabian forces retreating from B-15, and a decision was made to establish a line of defense just south of B-14.  The combined force had a little time to dig in, and did so with Col. Chumah in command. 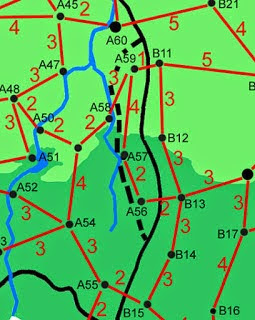 Objective B-14 is in the lower portion of the map, right of center.

The Uwandan forces stopped long enough at B-15 to re-group and reload, before advancing to objective B-14.  Without sufficient reconnaissance or air cover, the advance was a little more cautious than it might otherwise have been.  This served the Mugabian forces, allowing time to prepare for the defence of B-14.

As soon as Col. Chumah saw the reinforcements, he bagan to consider how best to stop the Uwandan advance.  Though somewhere in the back of his mind, he felt a brief sense of relief, he hated himself for it, and re-focused on his mission even more so.

Somewhat surprisingly, central command placed the delaying force under the command of the Col. Chumah.  Apparently his success in the first defense of B-15, outweighed his failure in the second.

Col. Chumah's  combined forces consisted of 3x SU100, 3x T34/85, and 6x BTR152 with 46 troops.  He chose a to defend along a tree line running perpendicular to the main road, and looking across the open ground of farm fields. 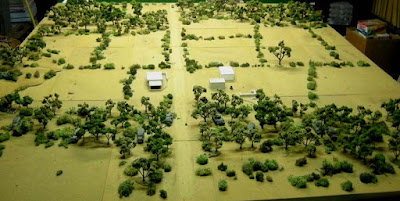 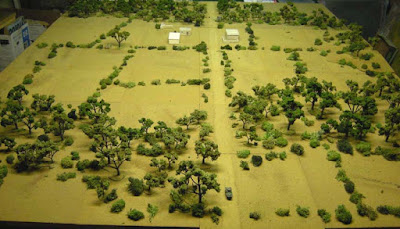 The Uwandans advanced in column, up the road, with the Ferrets single file and some distance in the lead.  Hopefully when the first shot came, the worst result would be the loss of a Ferret.

They call it, "Tip of the Spear", But Cpl. Zuberi called it, "First to die."  As his Ferret clumsily advanced down the dirt track, violating almost everything he had been taught as a scout, Zuberi only hoped that the first Mugabian to shoot, was as short sighted as his commander's orders. 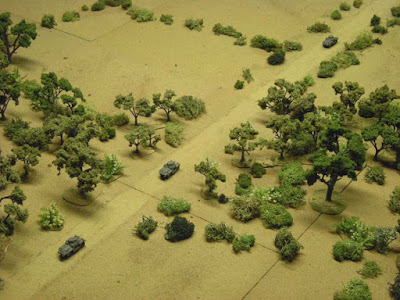 As the lead Ferret clear another clump of forest, and entered into an open area of road, straddled by farm fields, the report of a 100mm gun was heard.

The SU100's view looking southwest.  Cpl. Zuberi's Ferret is in the distance
near the puff  of smoke in the upper right of the photo.

Cpl. Zuberi thought dying would be more painful, then realized that the giant hammer blow didn't kill him.  As he and his gunner both managed to escape the smashed armored car, he immediately began looking for his would-be killer. 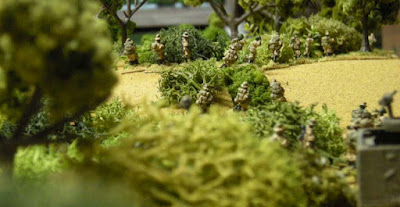 Uwanda infantry advanced over the rise opposite the SU100.

Advancing ever so slowly, the infantry finally found their Mugabian counterparts, and after a few rounds from the Priests, both the Mugabian infantry and the previously unseen SU100 withdrew.  The Uwandan infantry platoon continued to advance, exchanging fire with Mugabians, and finally killed the SU100 with a LAW rocket.  Despite repeated calls, the fire from the Priests stopped.  Nobody knew why. 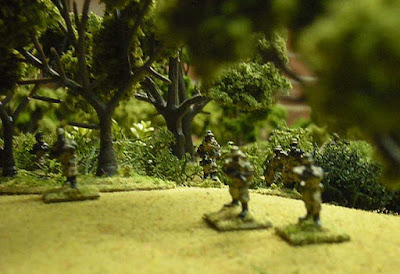 Uwanda infantry advance down the rise, after destroying the SU100.

A second infantry platoon advanced with the first, and slowly, the Mugabian left began to be rolled up.  The Mugabians shifted some of their armor to better support their left, and at about that time the Uwandan commander, feeling pretty good about how the advance was progressing, ordered a general advance of his other infantry and armor across the fields. 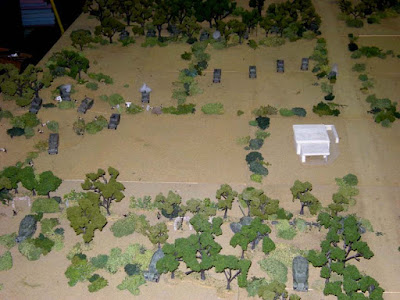 Looking south at the advancing Uwanan forces.  The rise, where heavy infantry
action was centered, is at the left, almost out of the photo.
Mugabian infantry on the left began withdrawing from their  positions, as Uwandan infantry began entering the Mugabian tree line, supported by M3s and their .50cal HMGs.  Uwandan infantry took cover in the bushes separating the fields, and Fireflies looked for targets in the tree-line. 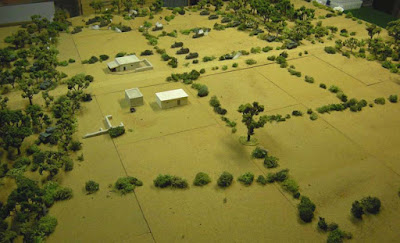 The Fireflies found targets, but couldn't hit them.  Their targets had more luck, and in a very brief time, four Fireflies, and three more M3 halftracks were destroyed for the cost of a single T34.  At the same time, the advancing Uwandan infantry in the Mugabian tree line were blind-sided by a captured Saracen, resulting in the temporary halt of the Uwandan success. 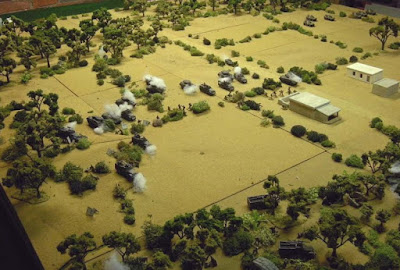 At about this time, Col Chumah was hit by fire from the Uwandan infantry in the fields.  One of his command team panicked, and ordered a general withdraw.  The fighting ended with Uwandan M3s destroying the captured Saracen, while all of the other Mugabian forces withdrew from the action.

Wounded, captured, his forces withdrawing, it would be some time, before Col. Chumah would discover that he was a recognized as a hero for his victory south the village at B-14. He was angry with himself for the slight sense of relief he felt at the sight of the Uwanadan medic. 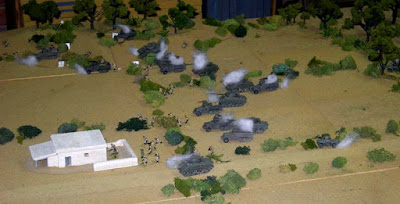 Another view of the Uwandan losses at the time of the Mugabian withdraw.

Suddenly, the Uwandan commander was left with the treeline, no enemy, and insufficient resources with which to continue the advance. A battle won and lost in the same moment.
______

This was a bizarre game.  The Uwandan dismounted infantry advance was painfully slow.  Then, once they made contact, an intense infantry battle took place for dozens of turns.

For the longest time, it appeared that the Uwandans had wrapped up the battle, Mugabians had lost a lot of troops, they were withdrawing, etc.  Then in a couple of turns, the Uwandans took a bunch of casualties to their armor and APCs, and the Mugabians just disappeared. The End.  Oh yeah, and the Priests just vanished, a third of the way into the game.

I'm pretty sure that I rolled over a thousand small-arms rolls (this game lasted over 130 turns), and there were only 10 infantry killed (and three of those were from cannon fire).

Combined with their previous losses at B-15, Uwanda's equipment  losses were too great, and their offensive has stalled.  By the time they could get to B-14 proper, the entire Muagbian army could be there. The Uwandans will withdraw back to objective B-15.  I'll have to hit up the "fate tables" to see what happens next.

Oh, and the deal on the Priests will be explained in AA18, coming up shortly.

Posted by irishserb at 6:55 AM