Some years ago, probably sometime in 1999, I began working on a 28mm colonial adventure game set in the South Pacific.  The idea was born roughly 17 years earlier, while watching the the movie Nate and Hayes.  The game was conceived as a Victorian adventure with miniatures, incorporating roleplaying, set generally in Micronesia.   The game, a sort of Darkest Pacifica,  included military contingents from various navies, shippers, traders, natives (both cannibals and not), antiquarian explorers, black-birders, gun-runners, pirates, jungle critters, mad scientists, dinosaurs, and anything else I could think to through in.

Players would run a faction (could be pirates, military contingents or various civilian groups) with around 12-25 figures, with a unique objective, and cooperate/trade/cheat/kill each other as required in an effort to achieve their objective.   Games would be loosely set in the 1880-1900 time frame, and most took place on a Spanish controlled island in the South Pacific.  I called the game "Ponape" after the island identified in the movie by the character, Ben Pease.

Anyway, while trying to reduce the number of old CDs and DVDs stacked around my computer, I recently came across a bunch of photos of the Ponape games and of the ships that I built for the various factions in the game.  Since I'm not really working on anything blog-worthy at the moment, I've broken the photos up by subject, and will post them in three or four blog entries over the next few days.  Here is the first, my 28mm colonial gunboats, ships,  and floaty things for getting around the Pacific.

The ship models are all caricatures of real ships.  Most are scratch-built from styrene sheet and/or bass wood.  I tried to make most spaces above the main deck, the bridge, and fighting areas of the ships accessible to players and figs.  The first ship was the Spanish gunboat, the General Concha. 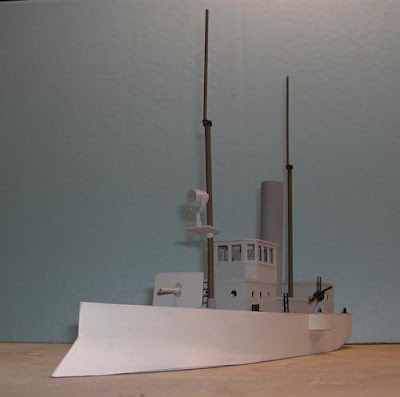 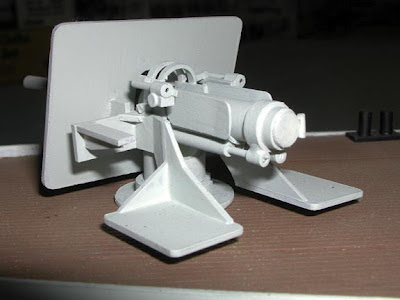 The main gun was scratch-built from styrene sheet, strips, and tubing from Evergreen Plastic. 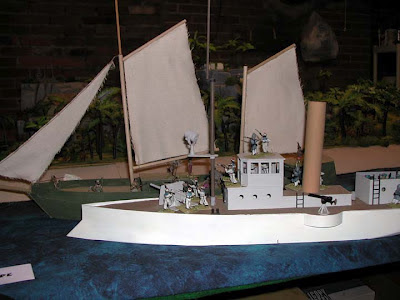 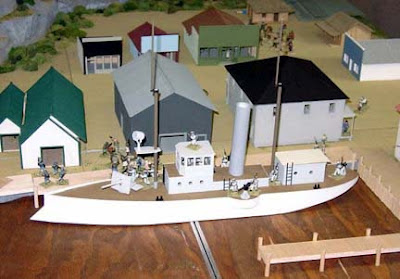 My version of the General Concha had a single 4,7 inch gun forward,  quick firing 3 pounders each broadside, and machinegun aft.  This is a picture of her in the first convention run of Ponape at Drums Along the Maumee 2000 in Toledo, Ohio.  I had forgotten my "water" drop cloth, so the bay featured a lovely wood grain  pattern.

Possibly my favorite ship was the Euterpe, an Italian  torpedo boat, that I built for one of the guys. 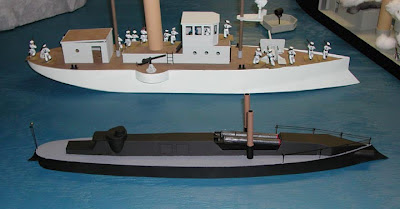 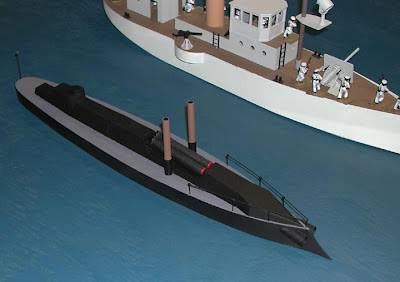 The Euterpe is shown next the the General Concha.  She was so small that she  is actually just about a full size model in 28mm.  Besides the two torpedoes (made by Jack Shaw), she had a twin barrelled 25mm Nordenfelt, which I added after the initial delivery of the model.

Shortly after building the Spanish boat, I added an American gunboat, and a French torpedo boat destroyer.  Unfortunately, I don't have too many photos of them. 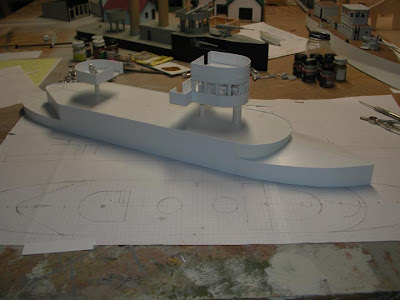 This is the French torpedo boat destroyer, the Dunois, under construction.  My version would feature four 9-pounders.  She was heavily damaged while in my trunk, when my car was rear ended several years ago.  She has silently set on my workbench awaiting repair for at least six years.

Here are a couple more pics of the Dunois and the American gunboat, whose namesake I cannot remember at the moment. 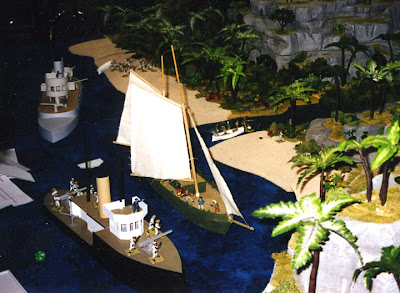 Though they don't show up in the photos, the American ship (black hull with white superstructure in the foreground) has two guns forward in sponsons in the hull.  The entire main deck lifts off to expose the compartments below.

The sailing ship was a quickie model slapped together from bass wood, and loosely based on a ship from Nate and Hayes.

Last is the German airship.  She never received proper detailing and was the first step into VSF for the Ponape game. 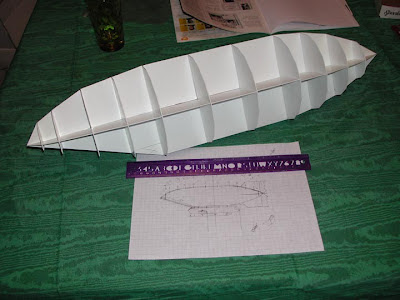 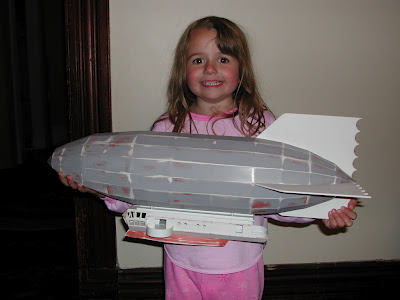 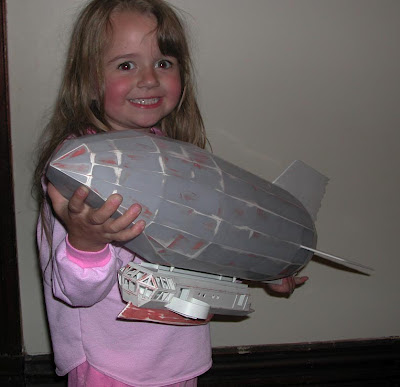 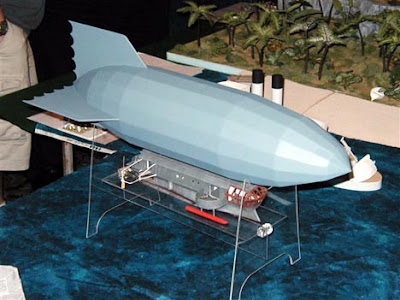 That is my daughter proudly presenting the airship many years ago.  The ship could be armed with two guns, either machineguns or 1 pounders.  The gondola was designed to be detached and could be affixed to a winged flying affair that converted it into the world's first seaplane.  The winged structure sets in a box, somewhere in my basement, never completed.

That's it for the ships.  Next up will be the island of Ponape.

Posted by irishserb at 7:39 PM